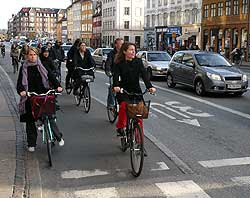 Copenhagen is a model cycling capital, as readers of the excellent Copenhagenize blog will be aware. I was there last month, and this week I’ll be making a few comparisons between there and London.

To London eyes, Copenhagen’s cycle lanes seem oceanic in their width. Even with the generous acreage of the bike lane above right (it’s Torvegade, just over Knippelsbro in Christianshavn) there’s still space for a separate bus lane as well as one for motor traffic. 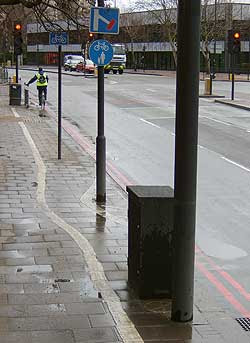 But compare that with a London bike lane in a broadly similar location (it’s Nine Elms Lane, just over Vauxhall Bridge in Wandsworth). The keen eye may spot a subtle few differences between the two. No wonder the lone cyclist here has taken the safe option of the road instead of the ‘facility’.

Then note that 36% of Copenhagen’s inhabitants cycle to work or education every day, compared to a figure for central London that’s more like 3%. (Of course, this could be just coincidence, like evolution or gravity.) 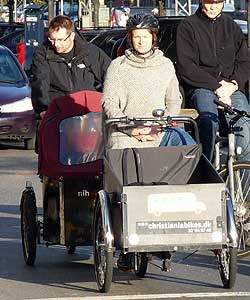 Many of Copenhagen’s lanes are wide enough for several bikes; even for a couple of Christianias (right), those cargo bikes whose front boxes could accommodate the average London studio flat. You see Christianias in London, but they’re rare.

Now, sure, many of Copenhagen’s grand central boulevards happen to be wide enough to accommodate big lanes; many of London’s pokey and narrow ‘main roads’ are not. But even where there is space, such as Nine Elms Lane above, most of it is turned over to cars; any ‘cycle lane’ will be thinner than a Dan Brown plot. 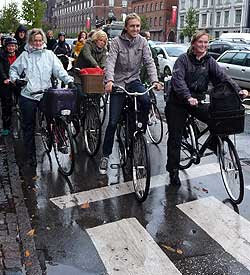 Even in the rain, most of the Danes seem to be smiling (right). Evidently a 50%-plus rate of income tax and lager at six quid a pint doesn’t affect their quality of life too adversely. And they all seem to be wearing normal clothes too (presumably bought from M&S on their last trip to London for half the price they are at home).

A London cyclist posse at the lights will have a few smilers too, but most people will be wearing fluorescent jackets and helmets, turning the ASL into a giant lemon-sorbet sweet trolley.

People talk about Copenhagen as the ‘world’s most liveable capital’, but not everything is perfect. London’s nocturnal wail of police sirens and thudding of helicopters, for example, is almost totally absent in the Danish city. That made it very difficult for me to sleep there. I lay awake worried who was catching all the criminals.