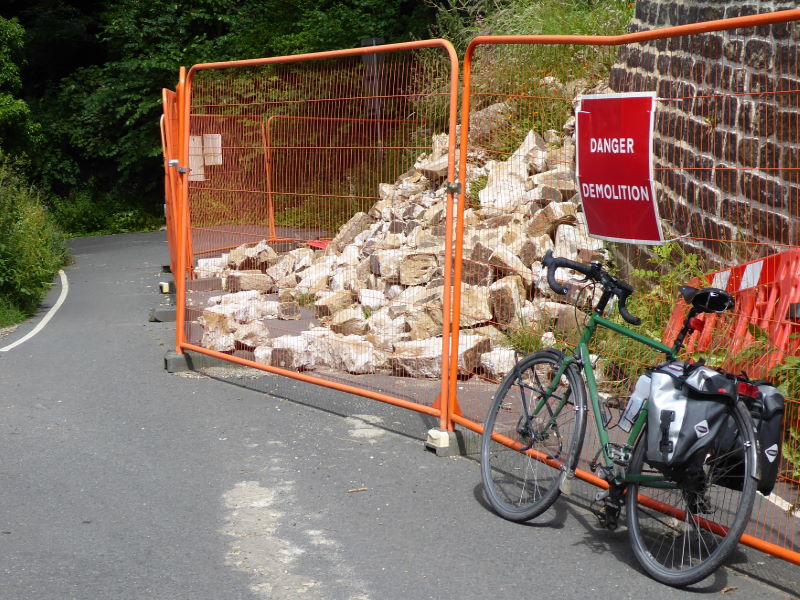 Bike pace is perfect for getting under the skin of things, as countless mosquitoes and fleas chomping me this summer could verify. And today’s ride – a sixty-mile circuit west of Thirsk via Masham and Ripon – revealed some delightful bits of quirky, off-piste Yorkshire.

From Thirsk’s market square I headed northwest past the racecourse and up to Maunby.

The Swale’s limited crossings west of Thirsk, most forcing you on horrible fast A-roads, challenge the bike-route planner. But I knew of a sneaky workaround from my Rivers Ride down the Swale last year: Maunby’s old railway bridge, which the landowners kindly allow cyclists and walkers to use.

South of it, a bridleway – surfaced, being a farm access road – runs past Low Swainby Farm towards Pickhill. You quickly see that this is no ordinary farm: three enormous flagpoles fly the rainbow standard, the EU flag and the CND emblem, and there are stylish sculptures located around the meadows and paths. A dinosaur; some frankly scary birds of prey; a showjumping horse; and more…

The owner, Graham, was around, and happy to tell me about his unsung sculpture park. The flags were a reaction to what he sees as a surge of intolerance and xenophobia following the Brexit vote in 2016, while the artworks – commissioned from local artists – are various celebrations and commemorations.

There are lots hidden round the farm, some obvious, some subtle. Some are amusing, such as the cat stalking various insouciant rodents on the barn roof, or a red squirrel perching on a gatepost. Some are of personal significance to Graham – the showjumper is a memorial to his late father, who loved horses. Some are whimsical, such as the dinosaur or the metal raptors.

And some have a clear political message. Outraged by government treatment of the Windrush generation a couple of years ago, Graham commissioned some symbolic figures of raised hands that adorn the gates. The farm’s main entrance has a striking work depicting manacled hands, and the word WINDRUSH.

It was splendid to be able to chat to Graham, made easy by the fact that I very much agree with him. Inclusivity, diversity, accessibility – I’m rather a fan of these. Especially the accessibility thing. Especially when it means permissive paths across old railway bridges, for which, thanks, Graham – the alternative is a ten-mile detour on nasty main roads.

Anyway, feeling uplifted by one bloke’s unashamed promotion of decent values, and a little guilty that I don’t have any flagpoles in my front yard, I carried on west.

Well is a little village hidden away on a lane outside Masham, with a quirky charm of its own: what must be a rare example of an 18th-century bus shelter; a sunflower competition; a pub; a Yorkshire Day BBQ on 1 Aug, £2pp, residents only; a Roman Baths (rems); and a well. Well well, in fact. Well, well.

I wasn’t the only cyclist in the square of brewery town Masham (Black Sheep, Theakston’s). It was a bit early for a beer though, so I had an ice-cream instead, and carried on through Grewelthorpe and Kirkby Malzeard, with pleasant views down to my left from the modest ridgetop.

My access road to Kirkby was car-free, thanks to a wall collapse that had closed it to motor traffic. See? If you ride a bike, you’re better equipped to cope with life’s obstacles.

From Kirkby it was a lovely long downhill to Ripon, the pocket-sized cathedral city – if you have a pocket the size of a cathedral – that I’ve blogged about several times before. I didn’t have time to visit the great basilica today, but I did have time to buy a chilli pork pie from Appleton’s butchers in the square.

I swung by Boroughbridge – another town I’ve mentioned in these pages before, notably for the Devil’s Arrows – and glided with a tailwind along quiet lanes back to Thirsk. The last few miles were notable for two fine sights: Kilburn’s White Horse; and Thirsk’s White Elephant, aka the cycle path northeast off Sowerby Road which goes nowhere but a barrier.

I still had work to do, however. Pub research is a vital element of my route articles.

I am a diligent investigator, you know.