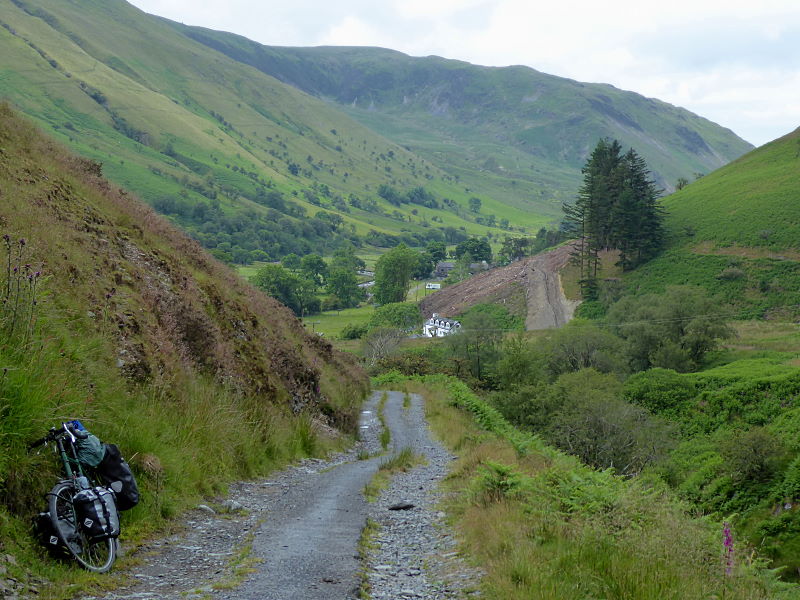 The railtrail up Elan Valley (NCN81) is superb: smooth flat scenic tarmac for miles, from Rhayader to the head of Garreg-Ddu reservoir. The weather was a bit less superb, grey and damp and spitty, but I was happy, winching my way up the waterside paths.

Waterside information boards showed the sort of rare animals you can see round here, though not the rarest: the traditional touring cyclist. I don’t mean the common or garden bikepacker, nor the lesser striped day rider, but the rack-equipped, pannier-toting, steel-frame tourer. To our mutual surprise, I encountered another, doing NCN81 (Aberystwyth to Shrewsbury). We chatted with the smiling recognition of kindred spirits, and made approving remarks about each other’s bikes. (His was a Ridgeback.)

I joined the mountain road from Rhayader and struck west towards Aberystwyth. A complicated way round, given my overall Geneva to Florence journey goes east; but I wanted to do Bwlch y Cloddiau, an obscure cycles-only pass (NCN818) that’s one of Wales’s highest, peaking at over 530m. And certainly one of its most strenuous.

I lost some height hurtling downhill to Cymystwyth and then cut back east, to join NCN818, on the long long climb up the track. It was evidently asphalted in the past, but only the middle strip now remains between here and the crossing of Afon Diliw, with either side shattered by (presumably) quarry vehicles). Plenty enough width to ride comfortably – except that it was so steep I pushed almost all the way to the top.

I was happy to keep stopping to admire the view, get my breath back, and fix my front rack which was doing its best to disintegrate. Come on, now, front rack. If I can keep stable despite everything, you can withstand a few gravel roads.

Down from here was fabulous though: smooth tarmac for miles of freewheel down to Llangurig, with wide, lush valley views opening out below. Somewhere I crossed my tracks from last September when I cycled the Welsh End to End: this is proving happy cycling territory for me these days.

At Llangurig, with delightful timing, I sat out an hour of heavy rain in the village cafe with a coffee and researched accommodation, before working my way through Llanidloes, Caersws and Newtown on back roads. I was particularly impressed with the covered market building in Llanidloes, not for its architecture but for its shelter from the nagging drizzle.

I missed a trick in Newtown though. Perhaps distracted by picking up some bargains for dinner in the Spar, I forgot about the recently resurfaced canal towpath that runs from here, as NCN81, all the way to Welshpool 15 miles away, not far from my intended campsite. Flat, car-free, easy….

Instead, of course, I ended up taking back lanes up and down and up and down to Montgomery, on the imagined basis that it sounded picturesque. Hmm, it wasn’t especially, though at least I had a long downhill to my campsite.

My heart sank when I got there though. FULL PREBOOKED ONLY, said a big sign, and reception was closed. But I was only a cycle-camper with a tent, so I queried at the farmhouse. A smiley, cheery bloke laughed and said of course I was welcome, and showed me to a lovely little pitch right on the banks of the Severn and handy for the shower block. My heart unsank.

I had a fine evening, enjoying a can of beer, a rather good chicken and noodle concoction on the trangia, and the sounds of native wildlife. Most of which had tattoos and were raucously cheering England’s quarter-final victory over Ukraine in the Euros. I wonder if I’ll get home before football does.