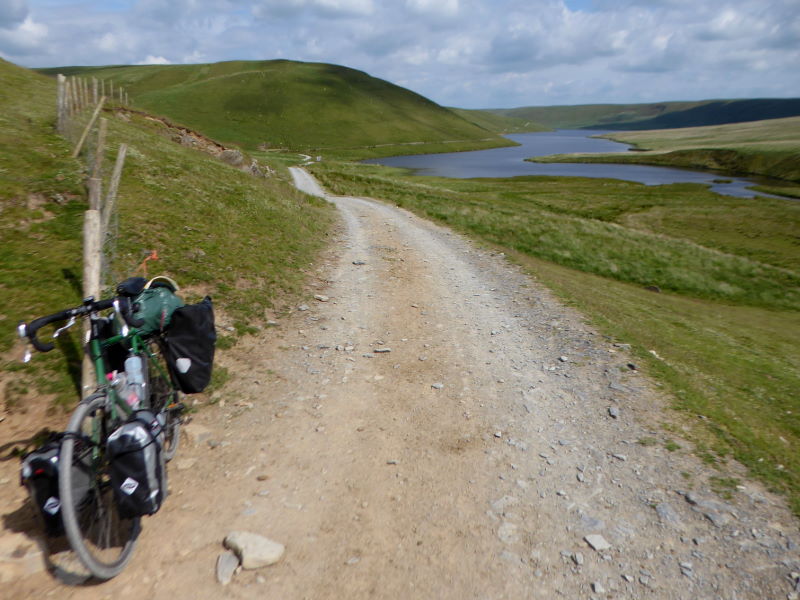 On a beautiful sunny morning, a beautiful ridgetop ride from my farm campsite to Aberaeron. I’d not even heard of it before, but it turned out to be a pleasant harbour town with a high count of bistros, cafes, and agreeable locals giving me helpful route suggestions.

I headed east out of town along the railtrail, which took me past an almost alpine meadow. I felt like doing a Welsh Julie Andrews, donning traditional dress and romping down the slopes singing Mae’r bryniau’n fyw, / Gyda sŵn cerddoriaeth! Fortunately I quelled the temptation with a pork pie.

Next – following that local advice – I took mostly the main road to Lampeter. The town has jostled with Hull for the title of ‘Most remote and unfashionable uni but where the students all had a fantastic time’. I was more interested however in the Co-op, for supplies, than investigating its academic side.

North from Lampeter was a flat, scenic riverside lane. I picnicked by a bridge in Llanfair Clydogau and went through Llanddewi Brefi, the home of Little Britain’s ‘only gay in the village’. (Though the 2000s BBC comedy series seems to have spelt it ‘…Breffi’.) In 2004 a BBC website article on the village quoted a local hazarding that there were ‘one or two gays’ there.

As for me, I never missed an episode of Little Britain. Because I never actually watched it.

Anyway, I took the railtrail north across the flatlands towards Pontrhydfendigaid, and – after a couple of wrong turns – struck up and up through Ffair Rhos to the track over the mountains east towards Claerwen reservoir, as recommended by the excellent cycle.travel website.

The tarmac east from Ffair Rhos gets up to about 450m, after which it descends as a gravel track – perfectly doable on my loaded touring bike – to Claerwen reservoir past one of Britain’s most remote farmhouses. Quite a challenge for Amazon or Deliveroo.

This is one of very few crossings of mid-Wales’s mountain heart. I did the next one south, round Abergwesyn, a few years back, and would do the next one north tomorrow. But for today, in fine sunny weather, I was enjoying some awesome, remote scenery. Had I not been able to skirt drily round a tennis-court-sized ford, I may not have enjoyed it quite so much.

Claerwen Reservoir is one of a chain here that keeps Birmingham in drinks, which now I re-read that, sounds more like a reference to Wetherspoon. The pebbly gravel path follows its star-shaped north shoreline for several miles, and I shared it only with a handful of other cyclists – all bikepackers scantily loaded, unlike my lumbering removal-van-cum-bike.

I suspect few of them were carrying things vital for a writer as I was, such as a laptop or half-full bottle of Shiraz.

The track alongside Claerwen is mostly flat, but by the end began to feel rather tedious, despite the unfailingly spectacular scenery. I was glad to get back to tarmac at the dam wall, from where it was downhill all the way to the campsite in the wonderful Elan Valley.

There were several long-distance walks from the campsite, but I was too tired to do any. Which meant no shower for me tonight. Because one of them was the long trek from my tent to the shower block. It would have challenged a Duke of Edinburgh group.