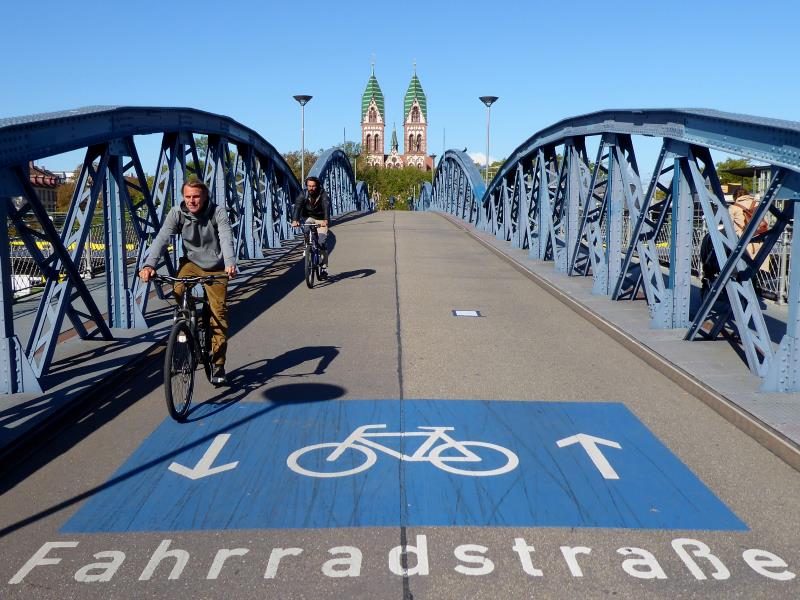 Freiburg, down at the bottom left corner of Germany, is often cited as one of its greenest, cyclingest cities. Certainly the central streets and roads are thick with riders, many of whose political colour you can easily guess.

But as with Cambridge, another student city, you feel it’s more down to a self-sustaining cycling culture than particularly good infra. (Freiburg’s cobbled historic centre, for example, is best walked rather than ridden, unless your handlebar video cam has some incredibly sophisticated stabilisation capability. Last night we enjoyed a few beers and a local pizza-like Flammkuchen in a lively central bistro, after which we deployed our own stabilisation functions on our walk back to the hostel.)

We spent the morning riding down to the suburb of Vauban, created a couple of decades ago as a sustainable neighbourhood on the site of an old barracks. That means solar panels; recycling that turns poo into fuel instead of chucking it straight into the river like in England; formidably insulated houses which need little more than inhabitants’ body warmth to heat them; and a car-hostile layout which prevents through-driving. However, of course, you can walk or cycle everywhere on conveniently linking paths. And people do.

Vauban is popular with families, whose kids can ride the traffic-free paths or even dead-slow car roads in safety en route to the many green-space parklets. Local shops and supermarkets are right there; no need for vehicle journeys. There’s also a tram to the city centre.

However… the friendly guy who runs one of the local cafes said that car use has been creeping up in the twenty years since Vauban came into being. It seems to still have a cachet, but for being ‘cool’ rather than being mostly car-free, turning a lighter shade of green year by year.

But I loved the place. We stopped for a cake and coffee in that cafe and relished the quiet, people-centred vibe. I’d live there in a shot. A shot of organic locally-sourced fairtrade berry liqueur, probably.

Vauban’s model is being closely studied by the developers of York’s ‘Teardrop’ development by the station, back in my home town. They will, of course, ignore it all and design something car-centric and terrible instead, but nevertheless describe it as ‘green’ and ‘radical’ and ‘award-winning’.