The fifth of my Yorkshire Compass Rides was a two-day trip up to the northeastern extreme at Robin Hood’s Bay. Day 1 was a hot, cloudless summer day, and involved a nettle making a phone call, an anti-fracking camp, and the best coffee shop in Yorkshire. 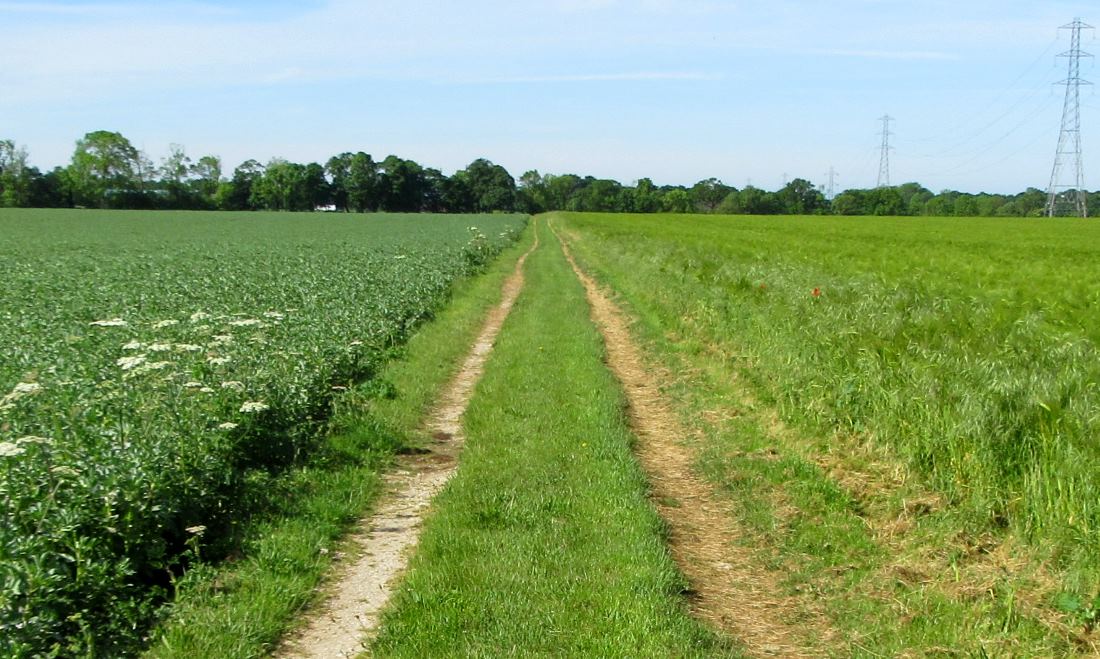 I’m doing this trip on my hardtail mountain bike, as it will involve some forest roads on the North York Moors on Day 2, and I need to keep my fillings. Having the MTB enabled me to leave York by a new route involving the farm track called Bad Bargain Lane, which local estate agents must be agitating to rename. A few back roads, and more tracks like this one at Sand Hutton (pic), got me eventually up from the flat Vale of York and into the hills northeast. 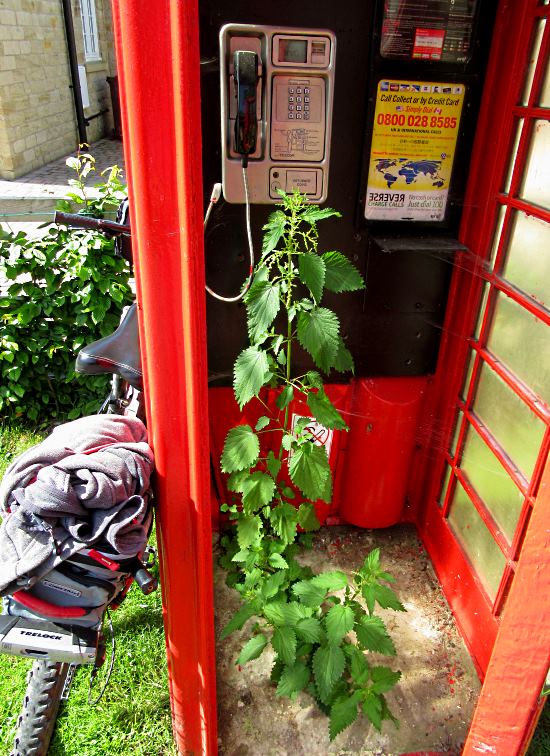 Some villages round here have repurposed their phone boxes as libraries.

In the village of Crambe, however, they’ve evidently turned it into a greenhouse, trying to cultivate the world’s tallest nettle (pic).

Urtica dioica thrives in acidic conditions, such as those rich in ammonia. So no wonder this one’s doing well… 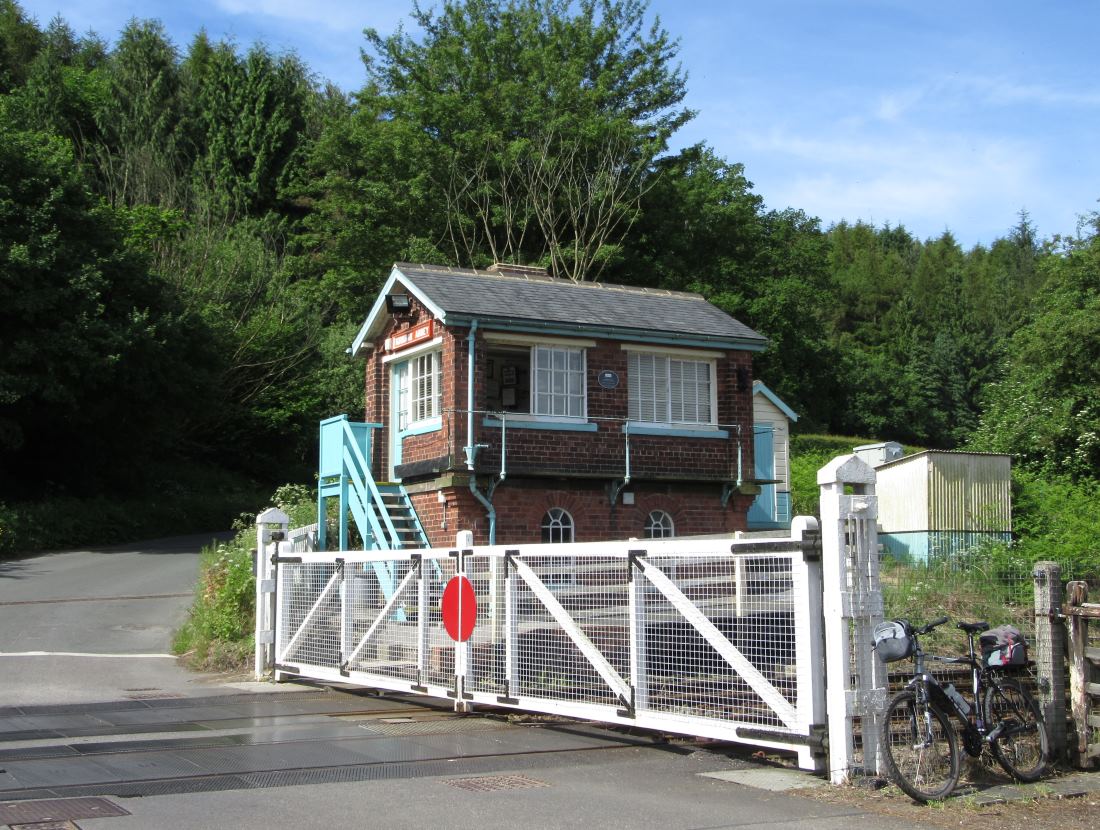 I went through two old-fashioned gated level crossings: a manually operated one at Howsham, and a little further on at Kirkham, this fine example (pic). The job looks easy, but perhaps it takes years of practice to get this good. 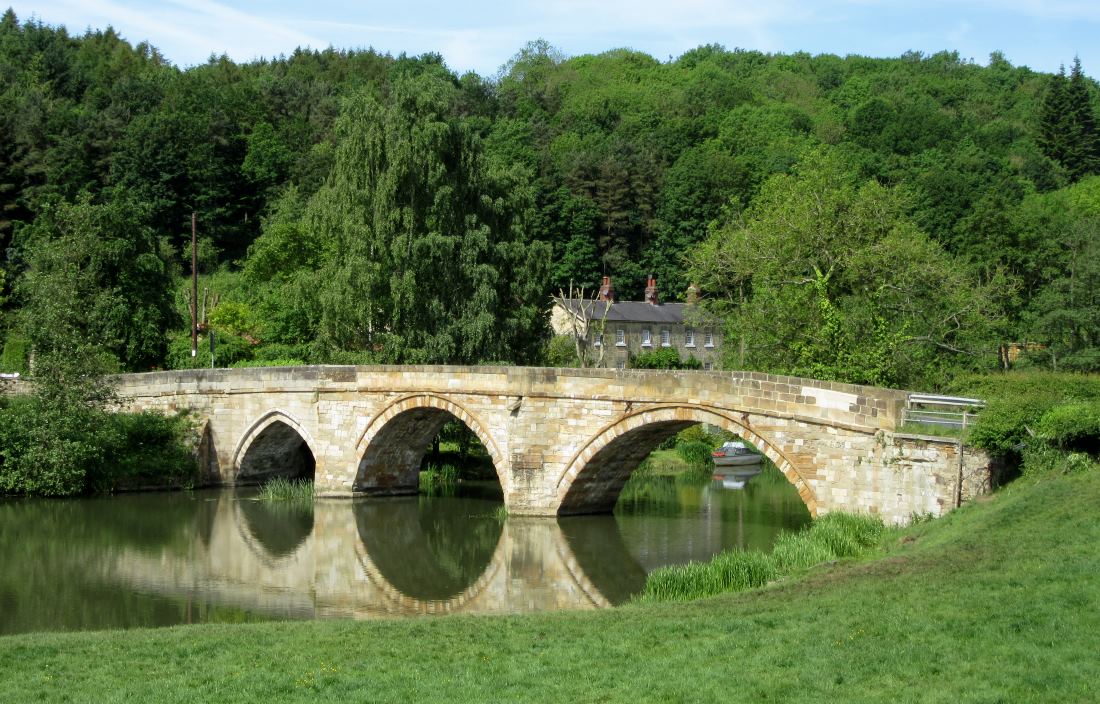 Kirkham itself has a lovely old bridge over the Derwent (pic)… 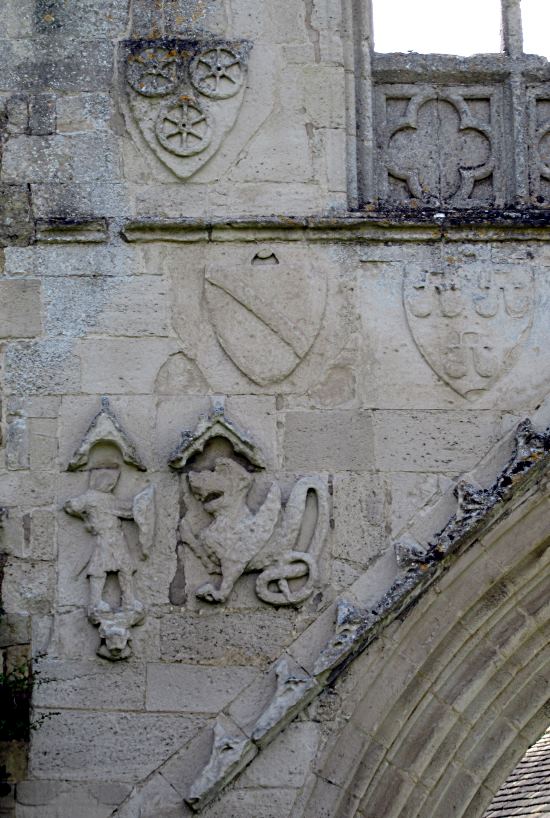 …and a ruined old priory. The gatehouse (pic), built around 1290, is apparently English Gothic, which I thought was a festival in Whitby.

But I’m glad to see that even in the 13th century they were keen on welcoming cyclists, to judge by the triple-wheel insignia at the top. A forerunner of the CTC shield, perhaps. 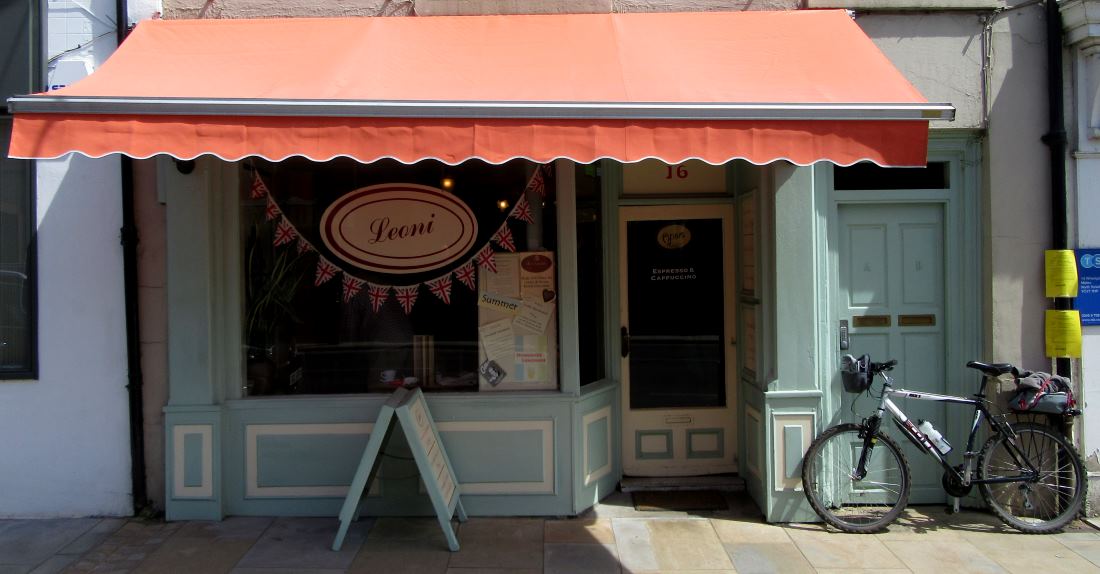 I stopped in Malton, something of a foodie town these days, for a coffee at the best coffee shop in Yorkshire, Leoni’s. I’m biased because it’s run by my cousin Simon, but as he was UK Barista Champion in 2002, 2003 and 2005, he clearly knows his stuff. I’ve never been UK champion of anything, though I did win a tea towel in a cheese cracker competition in 1972. Anyway, the Colombian coffee was excellent (from Medellin, it was, and rather better than the coffees I had when I actually visited Medellin).

Heading up north of Malton I went past this protest camp at Kirby Misperton. The doughty campers – some of whom have given up their jobs to come here – are trying to stop fracking. They were having a meeting, which I gatecrashed, and as a cyclist I enjoyed chatting to a few of them. Some people have an image of them as scruffy, useless layabouts who should get a proper job, which isn’t fair at all. Cyclists, I mean. 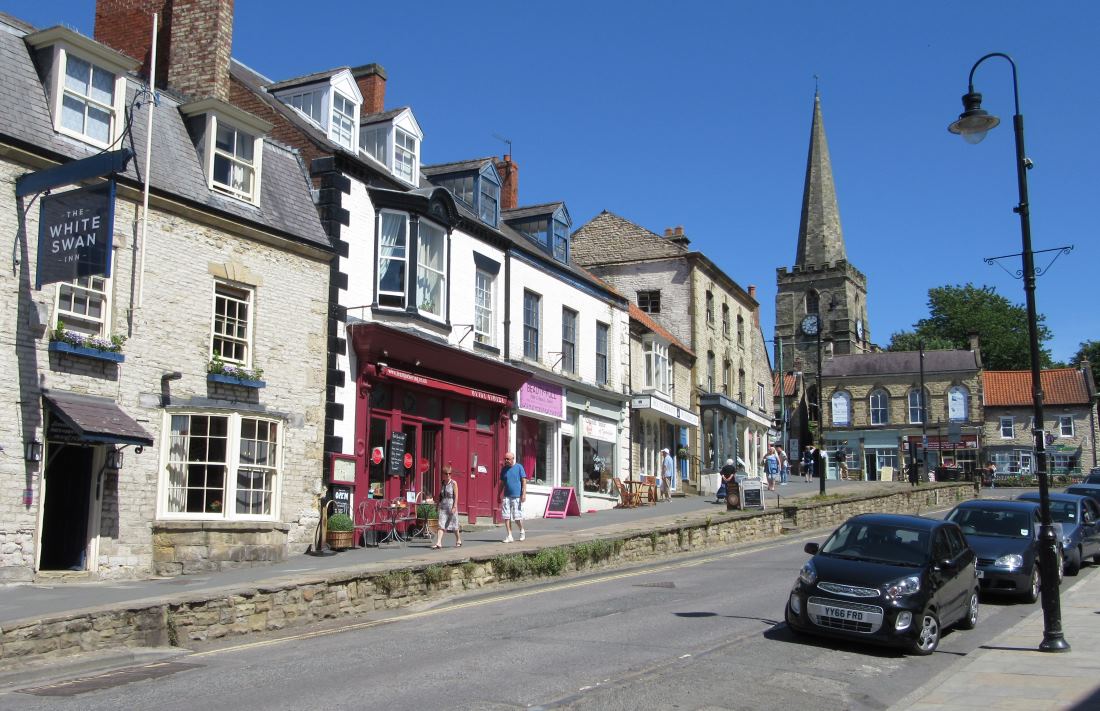 I made my way over some more bumpy farm tracks to Pickering, a handsome market town (pic) with one of Britain’s best heritage railways, the North York Moors Railway, and an extraordinarily high concentration of pubs. Though I guess the collective noun for pubs wouldn’t be ‘concentration’. Probably ‘blur’. 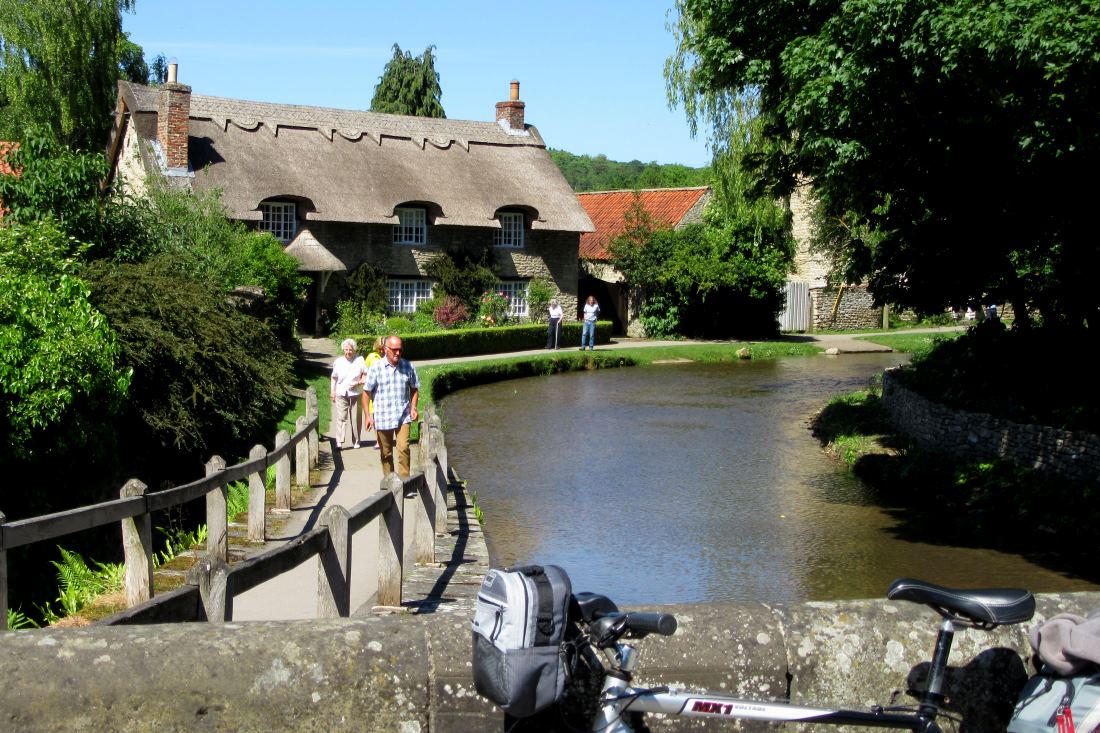 Finally I got to Thornton-le-Dale, a pretty village at the foot of the Moors (pic) with a stream that runs picturesquely through the town. A delightful spot to sit and while away the evening. Unless you have to rush to the toilet, lock your bike and dash to catch the last bus back home to York.

Miles from York to Thornton-le-Dale: 38