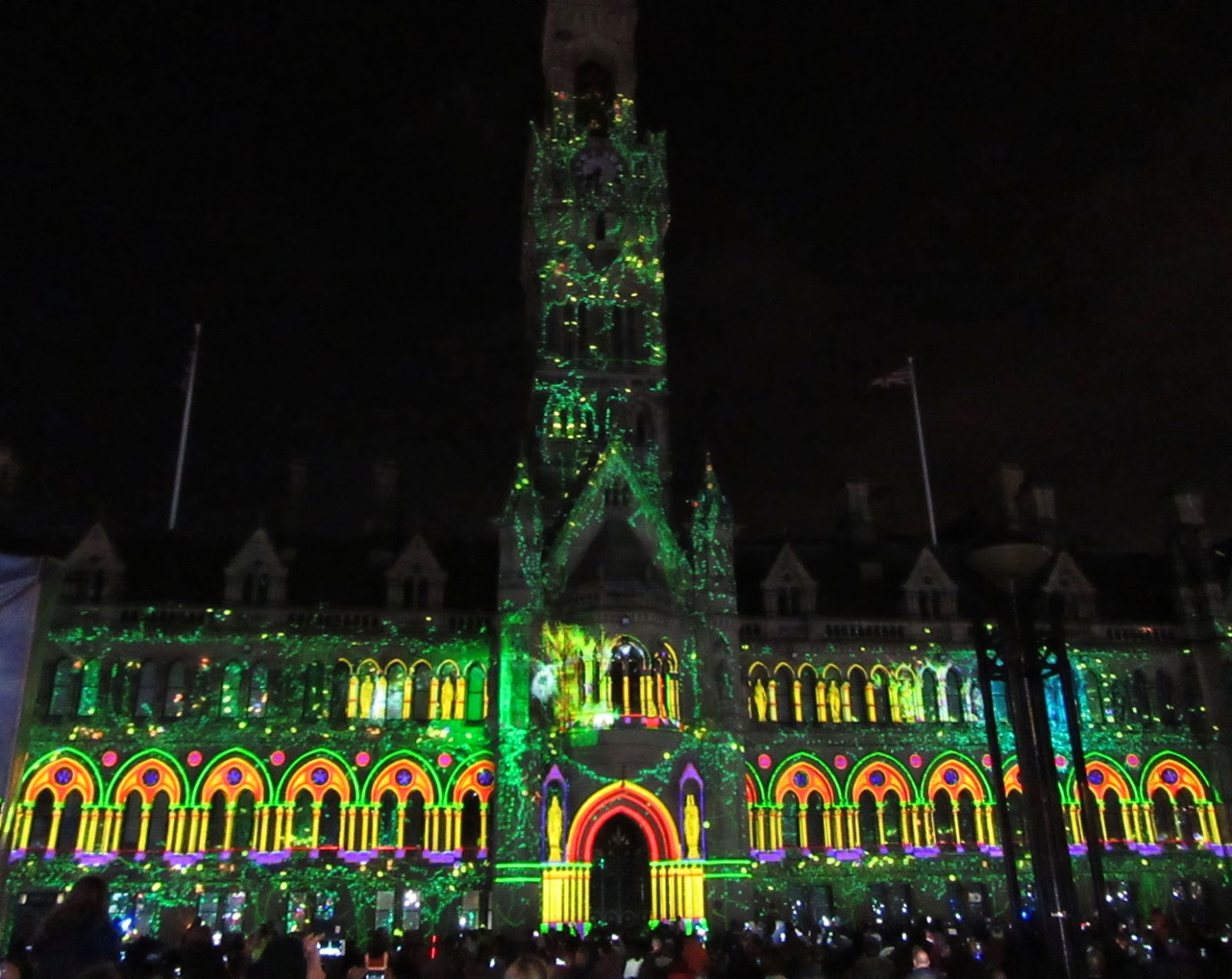 We’ve explored Bradford by bike many times. Of Yorkshire’s seven cities (Leeds, Bradford, Sheffield, York, Hull, Wakefield, and, er…) it’s the most surprising and intriguing, thanks to its ethnically diverse history (…ah yes, Ripon), from Little Germany to the authentic, tasty curry restaurants that feel like you’ve stepped into Pakistan (where 1 in 5 residents trace their origins). Colourful indeed, in the best sense of the word, as a previous visit to see the Diwali illuminations (pic) joyously celebrated. 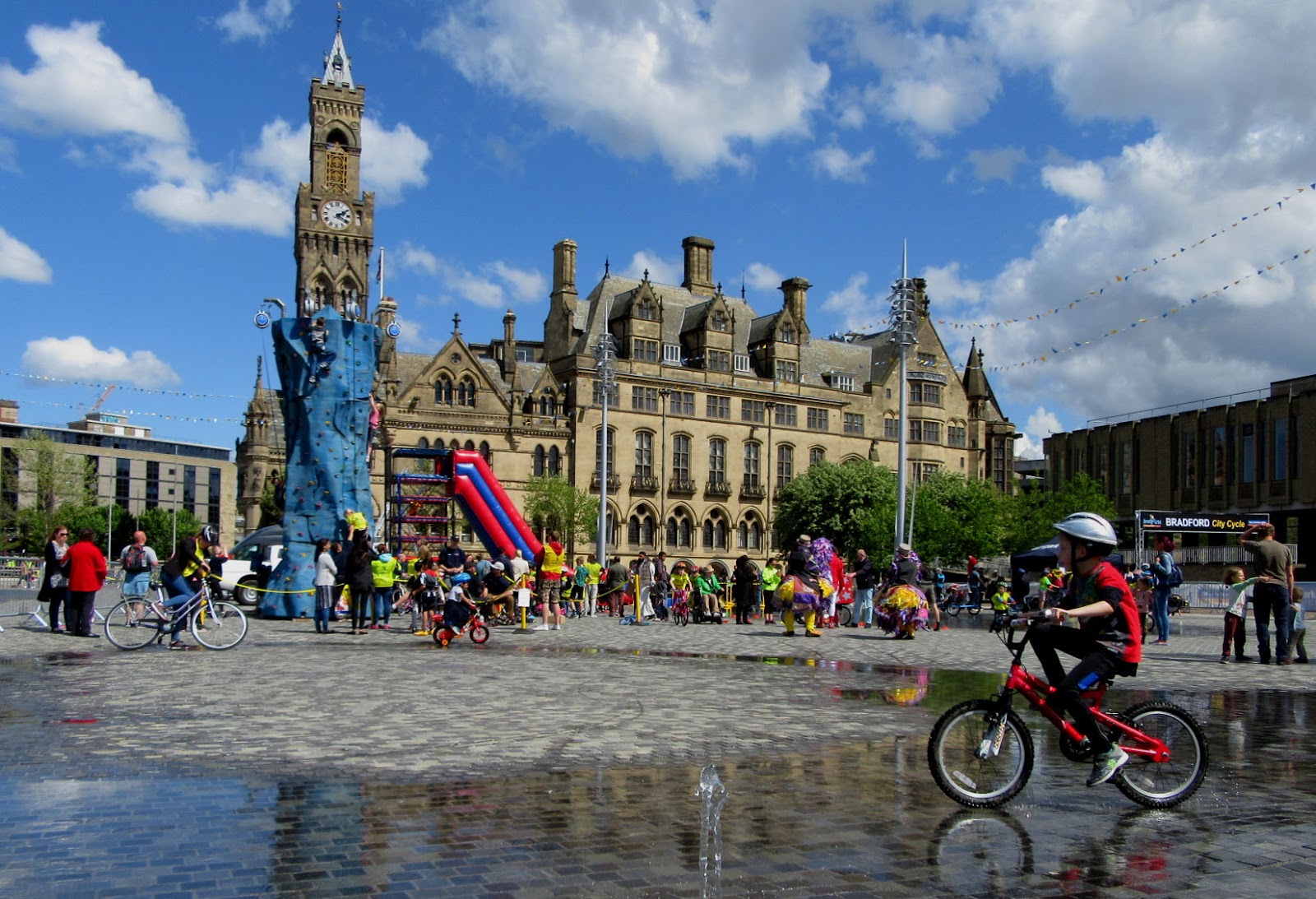 Thanks to redevelopment it has a rather fabulous central square (pic), with a family-friendly paddling pool/ fountain, a fine photo gallery (Impressions), and the outstanding, free, National Science and Media Museum. There’s a Wetherspoon too, so all needs are catered for. 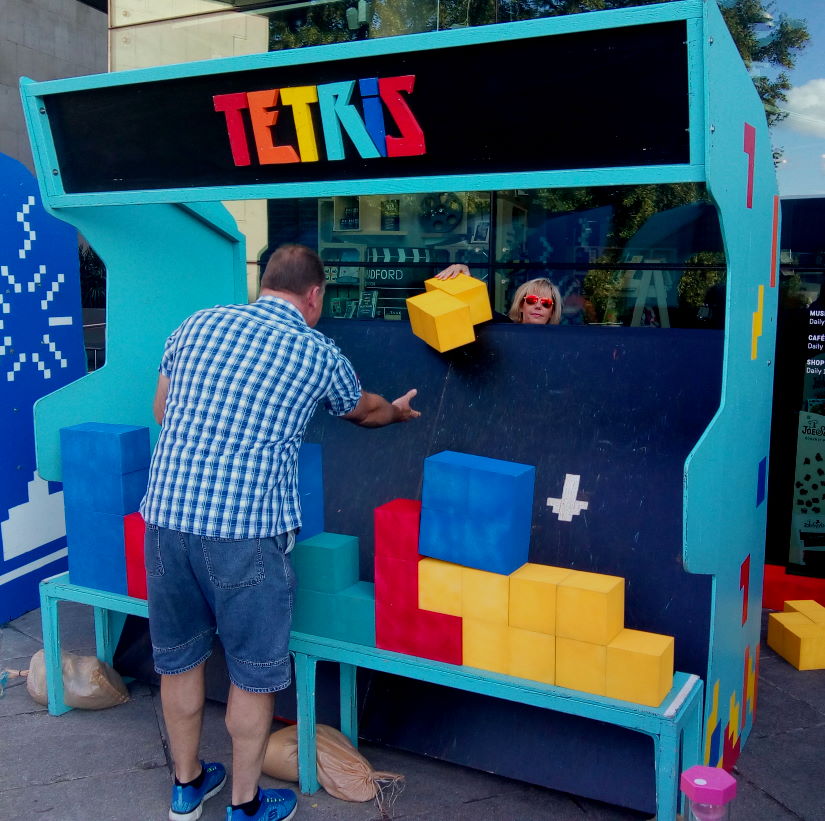 The Museum was, indeed, our main reason for going there today. An evening event there – all free – involved among other things our playing a real game of Tetris with large foam blocks (pic), enjoying a science rapper, and sampling the very promising early single malts from Yorkshire’s first whisky distillery.

(They’re based just outside Bridlington, so stand by for a whisky’n’cycling blog post on them soon…)
However, on dropping in to see some friends at Bradford’s excellent Capital of Cycling, we learned of something new. CoC does great work in a characteristically Bradford way, with resilience and energy, promoting cycling for all social and ethnic sectors, including refugees, on a minuscule budget and with reassuring success.

At their salubrious city-centre office complex – OK, the derelict warehouse that used to be a cheap shoe megastore – we were urged to try the recently opened Cycle Superhighway extension (pic). 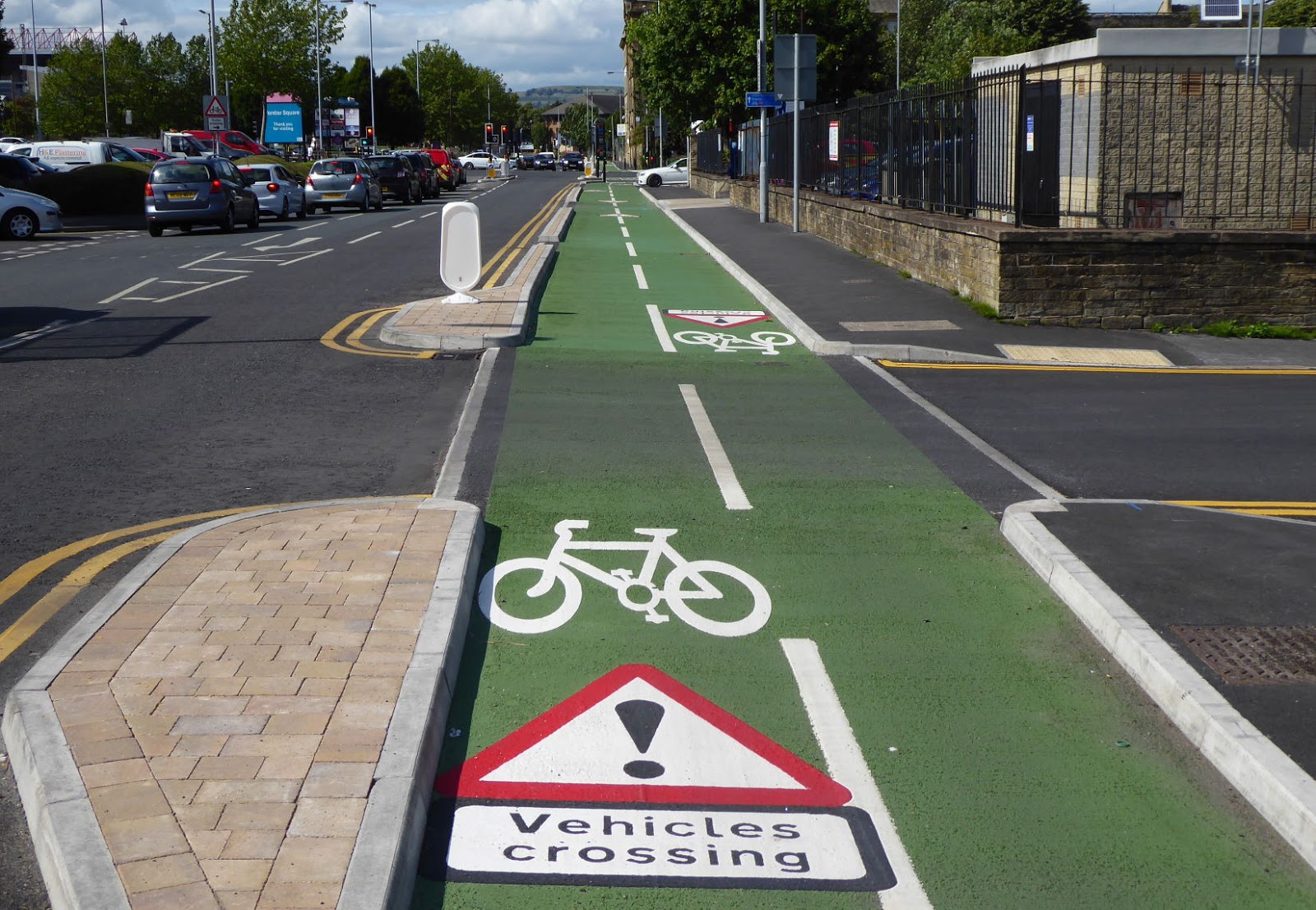 CS1 already runs from Leeds to Bradford, offering – if not always quite delivering – a fast, safe, segregated, London-style cycleway linking the two centres. The new extension continues for a few miles from just behind Forster Square station to the canal towpath at Shipley. It’s among the very finest cycleways in British terms (pic), so in other words, almost adequate in Dutch terms. 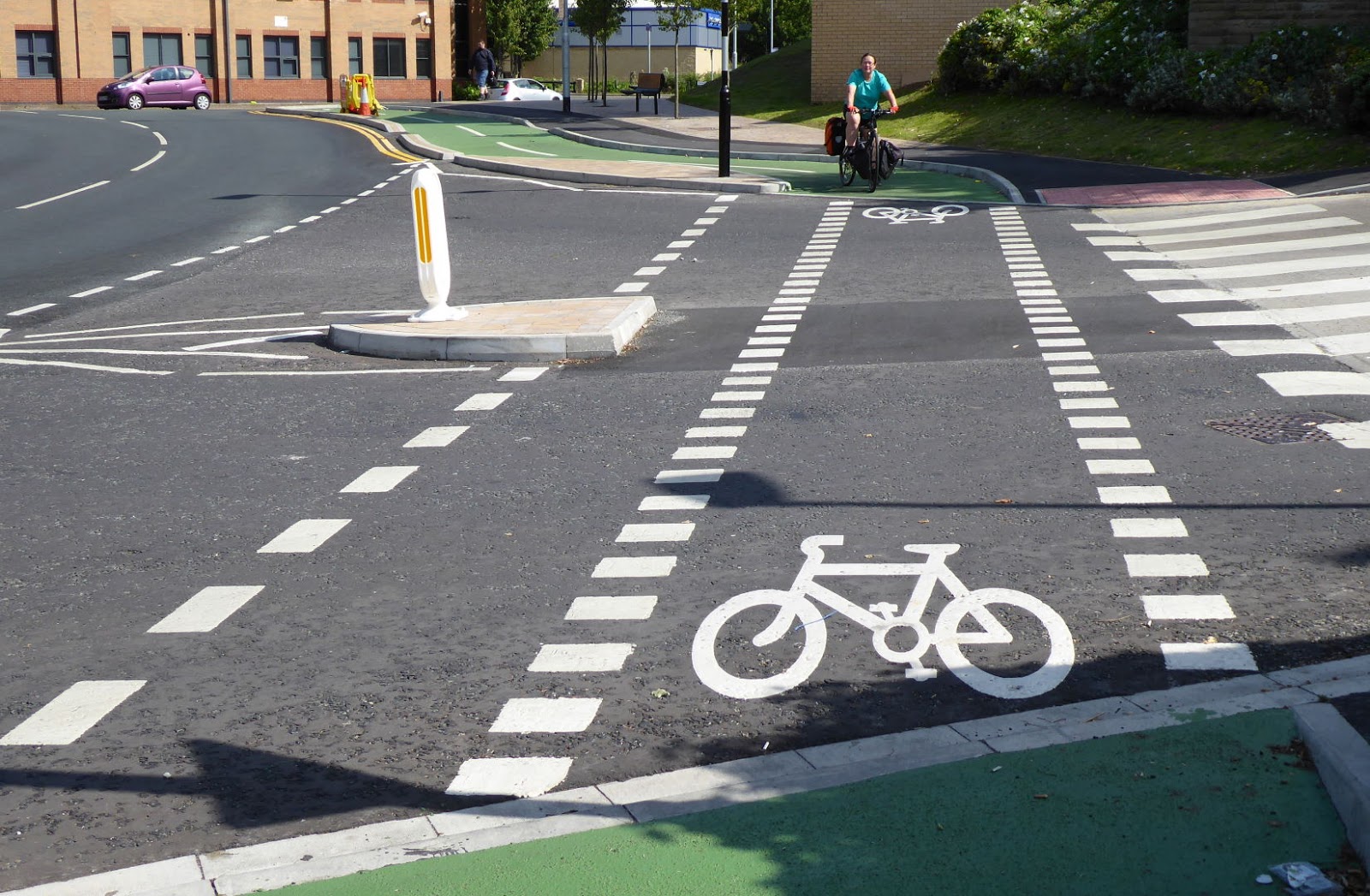 Surprisingly for British infrastructure, cyclists have priority at most junctions (pic). Even more surprisingly, most motorists seemed to respect this. We’d had many unpleasant experiences with impatient drivers when riding this route in the past, pre-CS1, and it made for a very positive change. 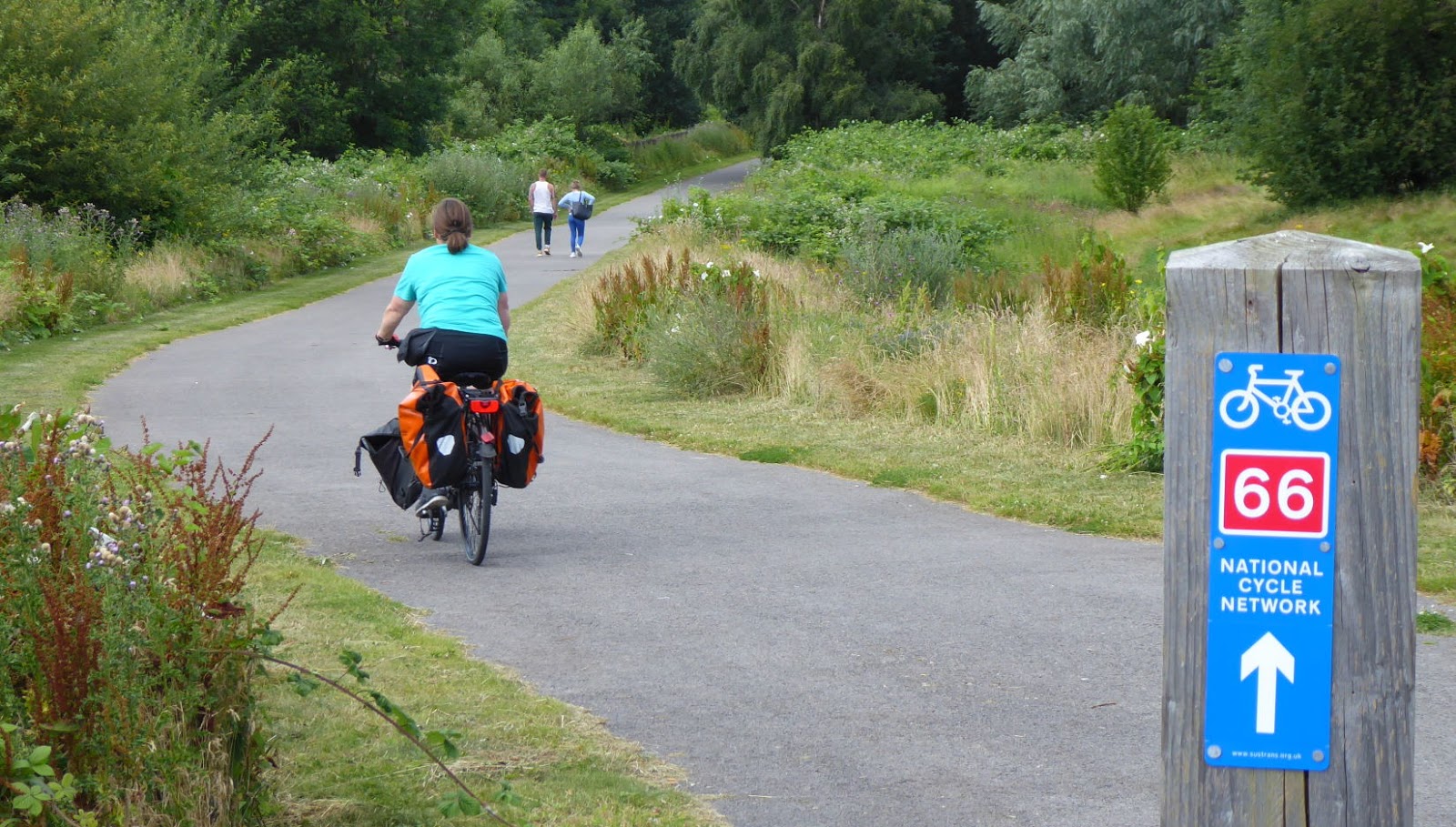 Towards Shipley the cycleway reverts to pathways through parkland (pic), which seemed to us far busier with walkers, joggers, cyclists and skaters than in the past. Yes, get your kicks here: it’s Route 66. 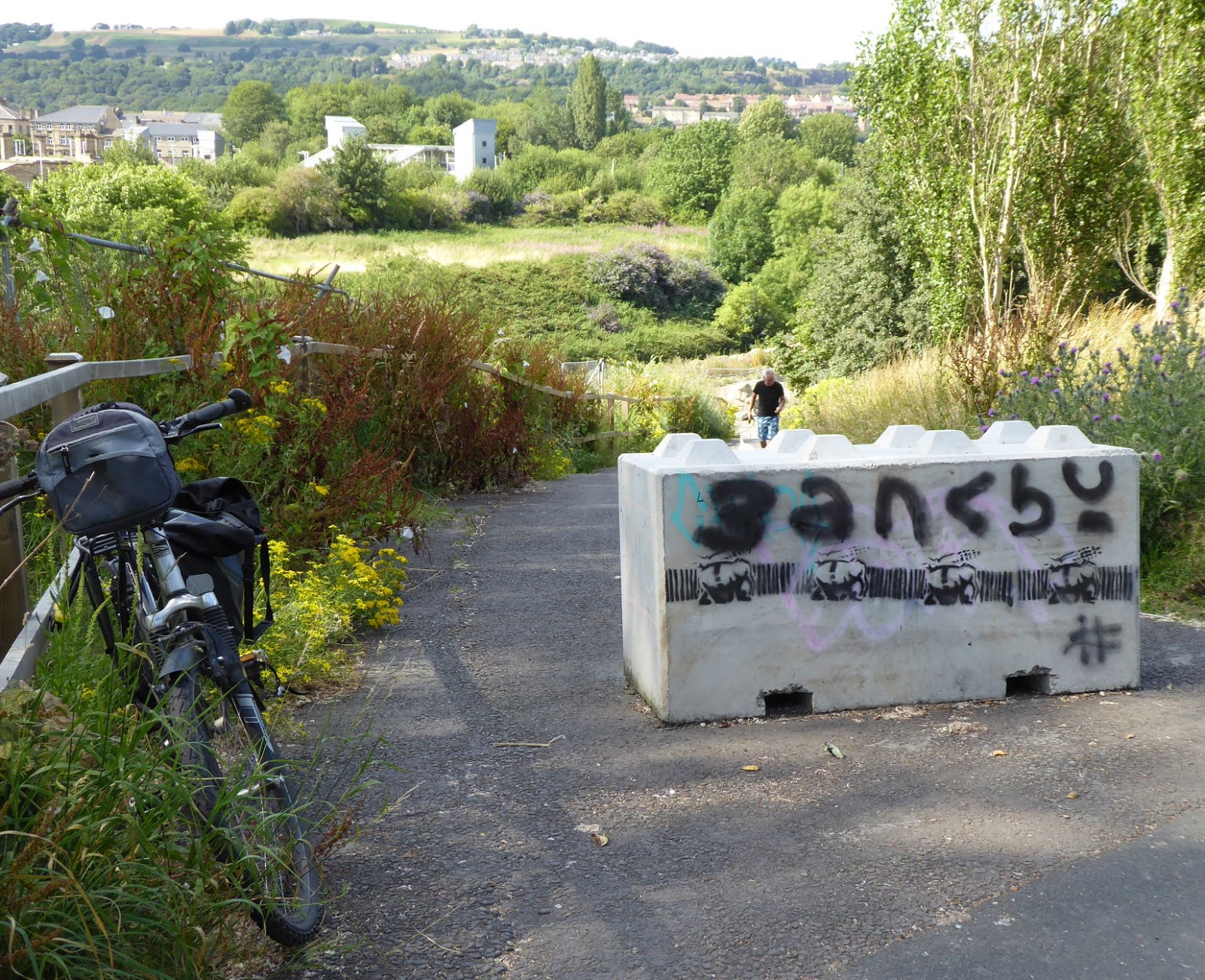 The final few hundred yards, joining the Leeds-Liverpool canal, isn’t quite complete (pic). It looks like Banksy himself has been here, to celebrate the enterprise. Not that he really has, obviously. It just looks like it. 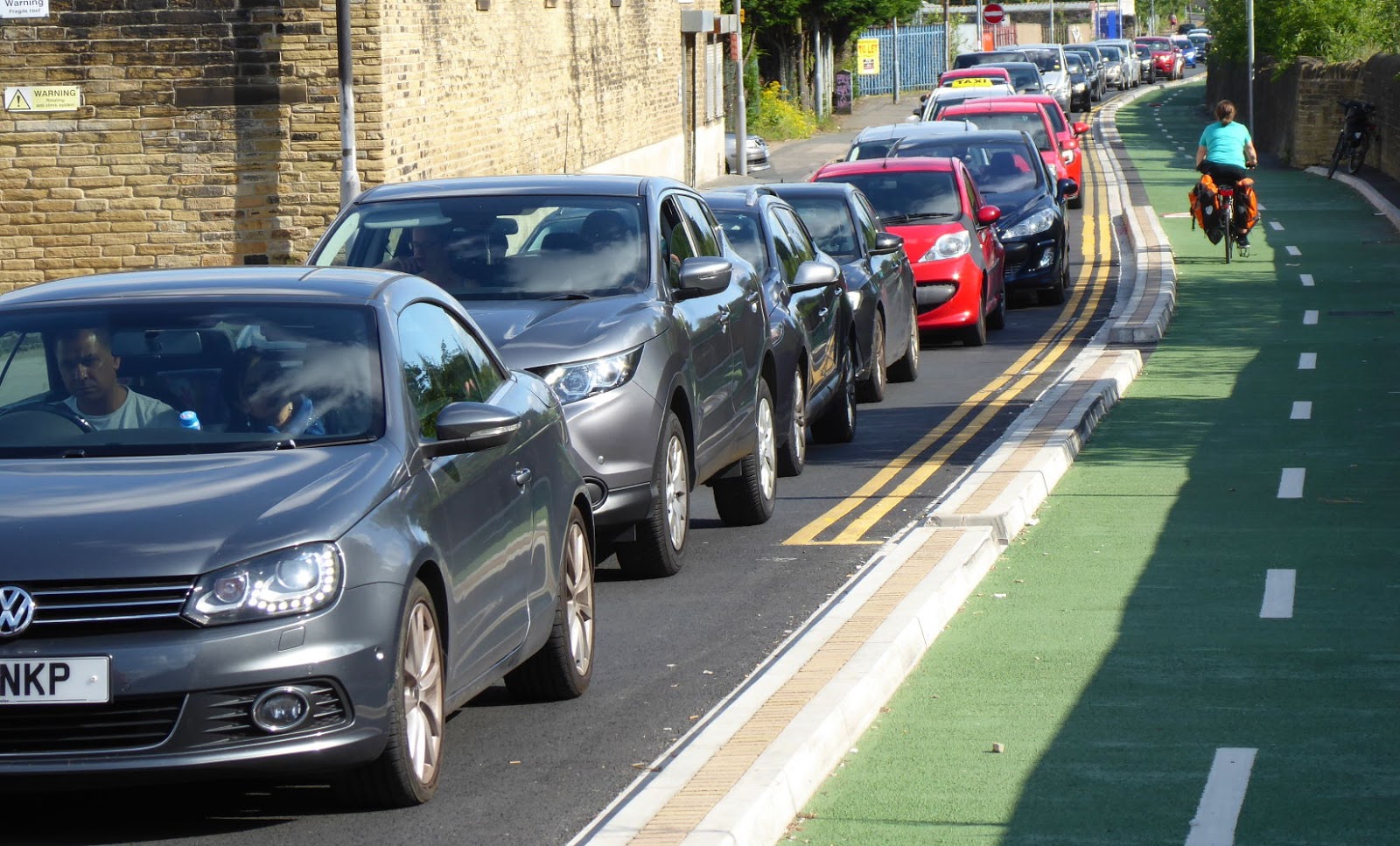 The CS1 extension now enables a grand cycling loop: from Leeds station to Bradford city centre, then up to Shipley and back to Leeds along the canal. An interesting round trip, largely traffic-free, of about 26 miles. Which may take you all day, depending on how tempted by curry you are. Much more pleasant by bike than by car – and probably quicker, too (pic).

Bradford tends to get a bad press, and certainly it has its economic and social challenges.

But we’ve always found it a vibrant, friendly, enjoyable place to visit. In fact, it’s our destination of choice for romantic weekends, possibly for the curry options, possibly for the availability of £30 rooms at Premier Inn. The gradual improvement of its cycling facilities is doing no harm to that.

As we say in Urdu, سائیکلنگ مبارک ہو!!