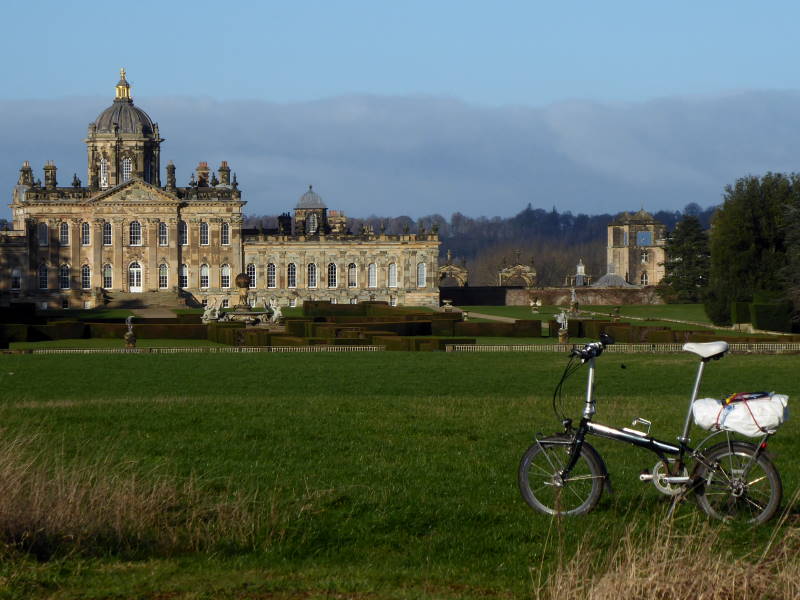 The road to Castle Howard is one of the oddest in Yorkshire. It bounds straight over slopes of the Hambleton Hills AONB, as straight as a reformed ex-con arrow following a Roman Road with a ruler-defined GPX. And it has some cool gates that are only just big enough to admit a bus, or those SUVs that people buy to go to Waitrose in.

It photographs very nicely, therefore, especially if your camera has a good telephoto like my Panasonic Lumix, and if your fingers aren’t trembling from the blue-sky January chill like mine were.

I got up there thanks to the £2 flat bus fare scheme running until March, and to my folding bike. As the bus inched its way through Carmire Gate – perhaps it should be called Carscraper Gate – I instinctively narrowed my shoulders.

The road isn’t Roman, of course. Along with the gates, it was laid out as part of the grand estate when Castle Howard was built starting in 1699, to John Vanbrugh’s sweeping designs. It’s been the home of the Howards ever since. And no, it isn’t really a castle, just as the Gates don’t have gates (though they used to).

It is, however, a rather splendid stately home, familiar to TV viewers of the 1980s who had nothing better to do as the setting for Brideshead Revisited. (I had plenty better to do.) It’s featured in many other TV series and films since.

I wasn’t here for the film connections, but to cycle what I could cycle. Not as much as you’d hope, is the answer. That straight access road, west of the Castle, is a thrilling ride, with gates and obelisks and monuments and super photo opps.

And cyclists are welcome to being their machines into the courtyard and use the very agreeable cafe. (You don’t need an aristocratic fortune to afford the lovely menu. Just a small one.) There are however no bike racks, still less a shelter, which is a shame, mainly because I can’t make any puns on ‘Bike Shed Revisited’.

However, although there are free, tarmac-road, public rights of way through much of the Castle grounds (£9–£12 admission), you’re not allowed to cycle them. They’re private roads, and footpaths only.

Nevertheless, I walked my bike along them, admiring the views of the Castle’s imposing southern facade, bridge, mausoleum, and of (what I’m told is) a female stonechat perching on a footpath sign.

The footpath-road eventually turns into a bridleway that I could ride out east from the grounds. The CAS bus from York only runs every two hours, so to maximise my options for buses back (again £2) I followed the bridleway east past farms all the way to the A64, which is plied by Coastliners every half-hour.

The Coastliners are high-spec new double-deckers – wifi, charging points, tables, big luggage space – but not quite high-spec enough to have a toilet onboard. So no coffee for me from the Castle Howard cafe…