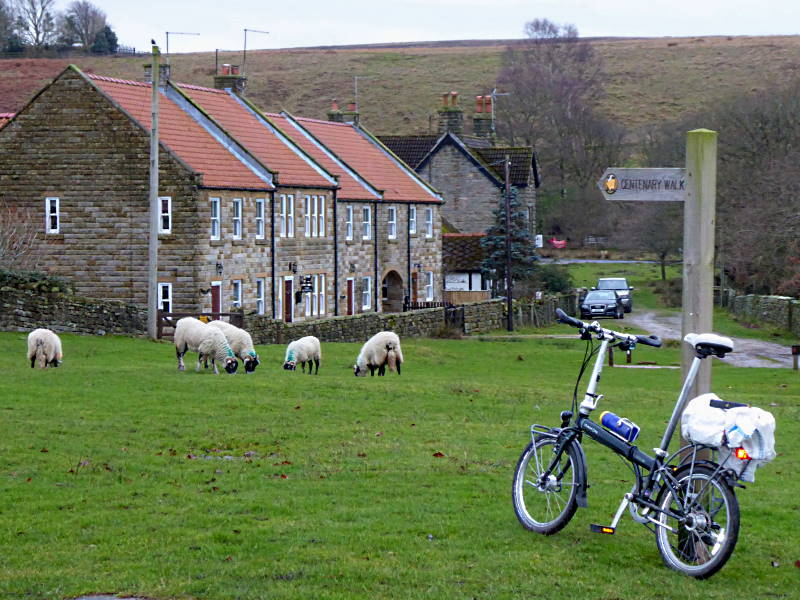 There are plenty of reasons to come to Goathland, one of the North York Moors’ most characterful and interesting villages. Its setting for the 1990s ITV series Heartbeat. The station’s appearances in Harry Potter. A road built by a giant, or the Romans, or perhaps someone else. Mallyan Spout’s dramatic waterfall. Sheep.

For me, though, it was a chance to cycle back in time: to an extraordinary pub unchanged from the 1930s. Thanks to the direct 840 bus between Goathland and York for £2 under the current national scheme, and to my folding bike, I could explore the epic countryside on two wheels and on my sort of budget.

I started by cycling from Grosmont to Goathland along a lane I’d wanted to do for a long time, a tarmac singletrack ‘unsuitable for motors’ but very suitable for cyclists.

Well, except at the beginning. Just out of Grosmont the ford was knee-deep in fast water, so I came round by a path through the woods a bit further north instead.

After the haul out of Grosmont, the lane – as expected for the North York Moors, a rollercoaster track masquerading as a metalled thoroughfare – plummets down to the village of Beck Hole, and into a timewarp.

The Birch Hall Inn, by the bridge over the eponymous beck, has had only two owners since the 1930s. Because of a clause in the sale contract when it last changed hands, the interior remains exactly as it was then.

There were ten of us waiting for the Inn to open at 11.30 this damp, grey winter morning: nine walkers and me. I enjoyed a splendid, mild-like pint of the pub’s in-house brew, Beckwatter, and some good conversation with good people by the fireside.

I desisted from having a second, mindful of the 1 in 4 / 25% climbs either side of the pub to get out. It’s called ‘Beck Hole’ for a reason.

Goathland is only a mile or so away, along a knife-edge ridgetop road, if your Swiss Army knife is as blunt as mine.

Not being a TV watcher I’m only vaguely familiar with Heartbeat, a daytime police/country-life series set in 1960s rural Yorkshire, which was filmed here in Goathland. But fans can enjoy the sight of Scripps Garage and Funeral Directors – further proof cars are bad for you, people – still decked out as it was for the programmes.

The village stores also play up to the ‘Aidensfield’ business (the fictional name of Goathland in the series) and there’s no problem finding Heartbeat-themed souvenirs.

If you’re lucky, you might see two vintage cars that featured in the series parked in the road: an Austin A40 and a Ford Anglia police car.

Goathland’s railway station – on the North York Moors heritage line, arguably the country’s most scenic and best such – has screen fame too, thanks to it (and the NYMR’s steam trains and rolling stock) featuring in the first Harry Potter film.

The nearest I got to doing magic in Goathland was making a bacon sandwich disappear at one of the various cosy cafes.

The village is quite spread out, making a bike very handy. It enables a visit to the nearby ‘Roman Road’ on Wheeldale Moor for example (Wade’s Causeway, which I’ve written about elsewhere.) And it brings you fairly close to Mallyan Spout, a grand 20m / 70ft high waterfall plunging down into a curving river gorge.

I walked down there, admiring a strange tree trunk near the falls which has hundreds of coins embedded in it. A wish tree, maybe: the cumulative work of tourists following the superstition that if you ram a 2p into a tree trunk it will bring good luck, similar to that infernal modern trend for putting padlocks on bridges.

Or perhaps someone with a pocketful of change got bored waiting for the 840: it only runs every two hours.

And, finally, there’s the sheep, of course. ‘Goathland’ may mean ‘goat land’, but there are no goats. (See also Strome Ferry, Swanland, Oxford etc.) There are however many free-roaming blackface sheep, which sounds a bit non-PC, who wander around the village’s many green spaces as they have since medieval times.

Sadly, there’s some doubt over the future of the 840 bus. Despite being regularly celebrated as Britain’s most scenic scheduled bus journey for its vault over the North York Moors between Thornton-le-Dale and Sleights, it may not be here next year. Let’s hope it doesn’t become just another aspect of Goathland’s past.