The final day – of the End to End part of my Cuban trip, anyway.

I set out in the dark from my miserable little hutch in San Juan and rolled cautiously through the black predawn. There were three cafes open in the town, and several people about. So at the first I had a quick coffee to set me on my way.

Thaty proved enough for me to make it all the way to the second one fifty yards on, where I repeated the process. And hence to the third, etc. 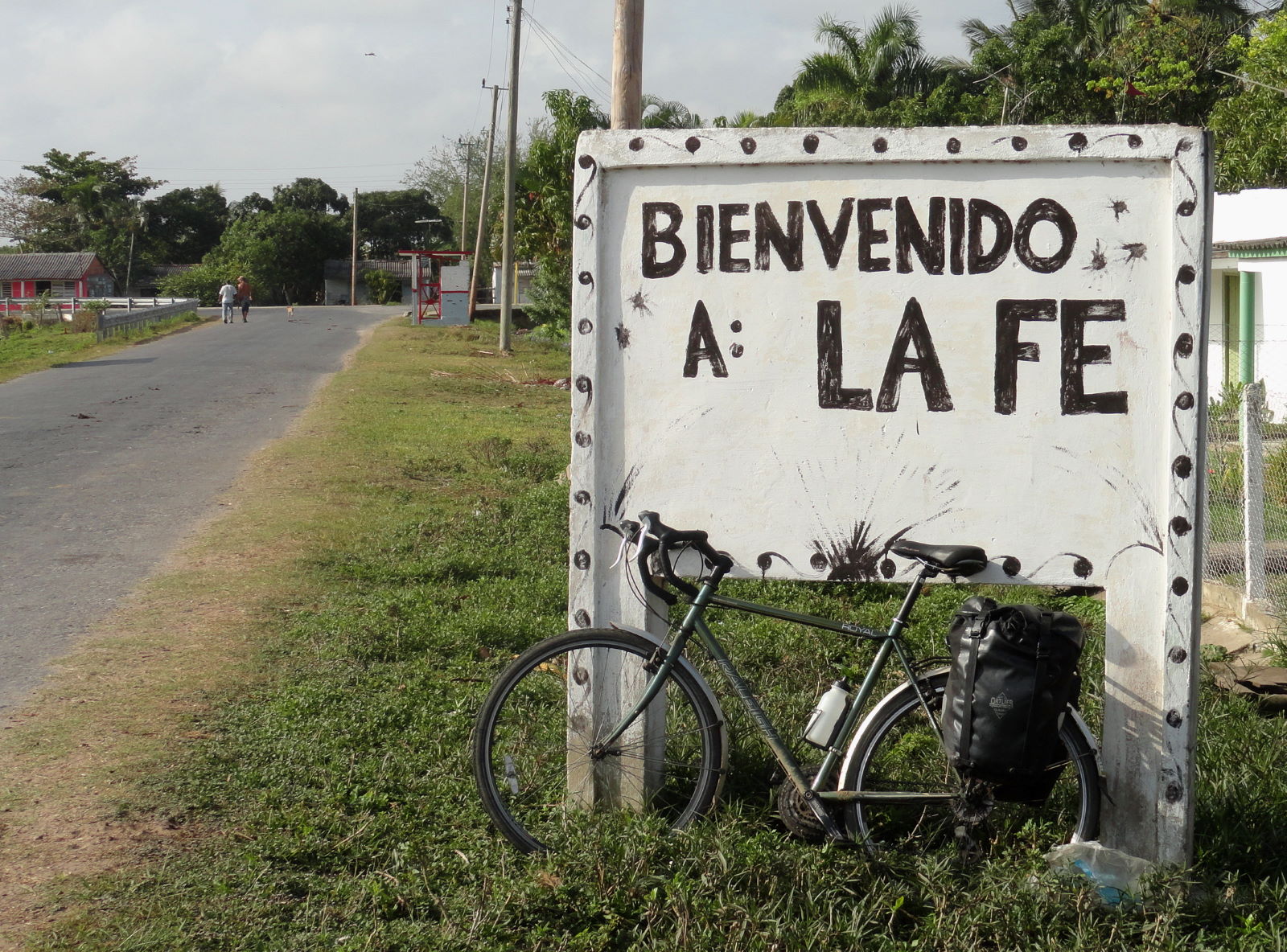 I polished off the last stretch of the Carretera Central, scoring a few cold refrescos en route. I bypassed the humdrum-looking town of Sandino and got to the village of La Fe (pic) around ten.

I’d decided to make this point the end of the trip. There’s still another 100km of beautiful coastline road from here to the lighthouse at Roncali, at the island’s very western tip. However… the peninsula beyond La Fe is a nature reserve, Guanahacabibes, and access is by permit only.

Organised dive- and tour-groups make visits and stay in an expensive hotel at Maria La Gorda, and no doubt a TV crew could have set up a trip to the end by burning a few dollars. It’s also possible to enter in a car with an official guide… but there’s no casual access for cycle-tourists on a peso budget. 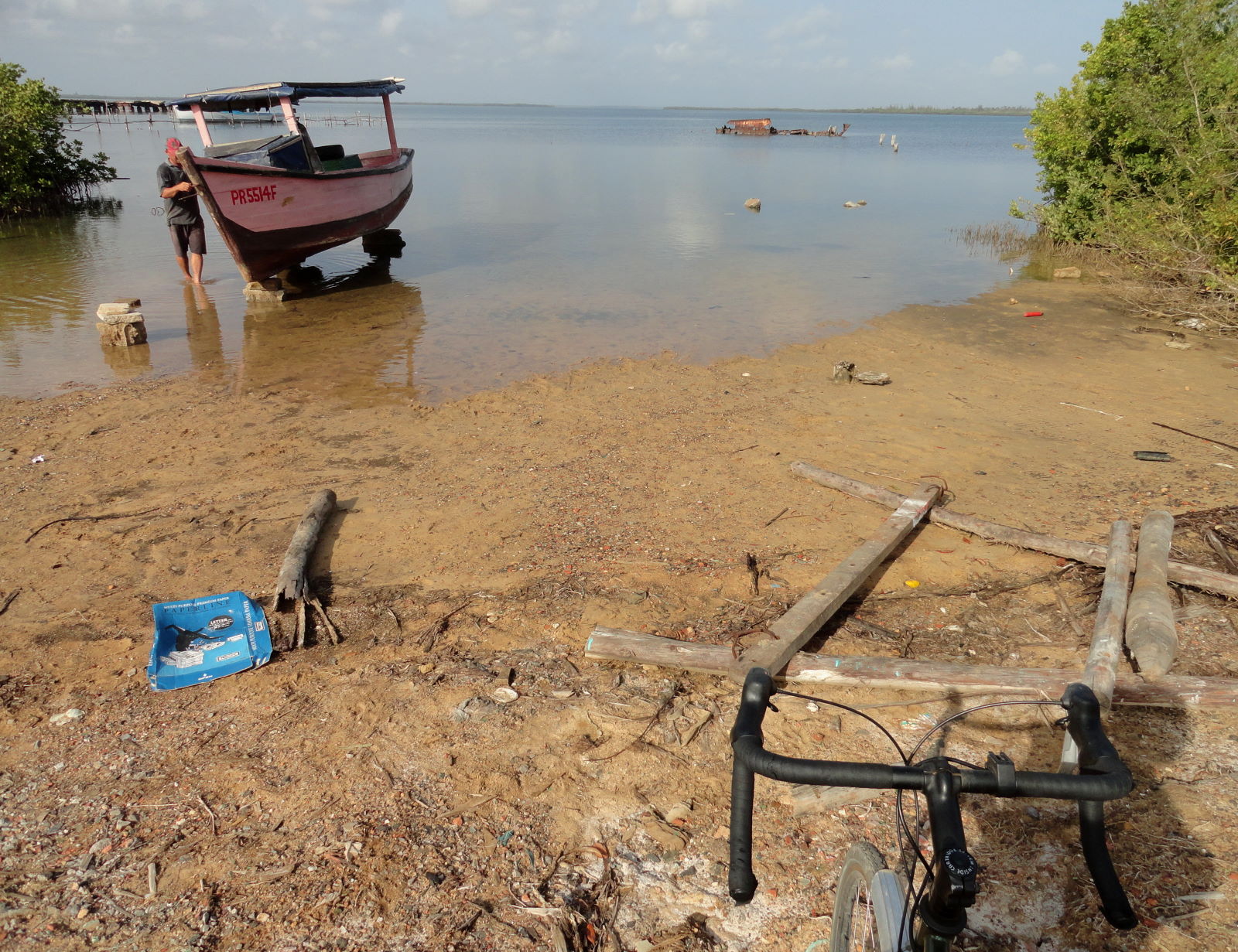 So, with a mixture of reluctance and relief, I took a few souvenir snaps at La Fe’s very low-key low quay (pic) and celebrated with a can of cold pop. And La Fe seemed an appropriate place to end, in a terminus, tiny-community, John-o’-Groats kind of way. The Carretera Central, my magic carpet for much of the thousand-mile span of Cuba, peters out apologetically here onto a tiny bit of sand. There was a bloke with a fishing boat on stilts.

Good people seemed to outnumber bad people by about 99 to 1, and everyday encounters were always pleasant. They were aware of the disparity between their purchasing power and mine, but were self-confident, proud of their country, full of mutual respect, and eternally friendly and helpful. It’s been a quite wonderful trip.

So what now? I had two weeks before my flight back from Havana, and planned to spend them being a tourist with a bike, rather than a cycle tourist. A week in honeypot Viñales, then a week exploring Havana, then home at last.

So, first, I had to find a place to sleep and celebrate tonight, and that place was to be Pinar del Río. I rode eastwards for the first time in nearly a month, past Sandino scenically to Guane. En route I was entertained by the background hills and foreground palms and ponds (pic)… 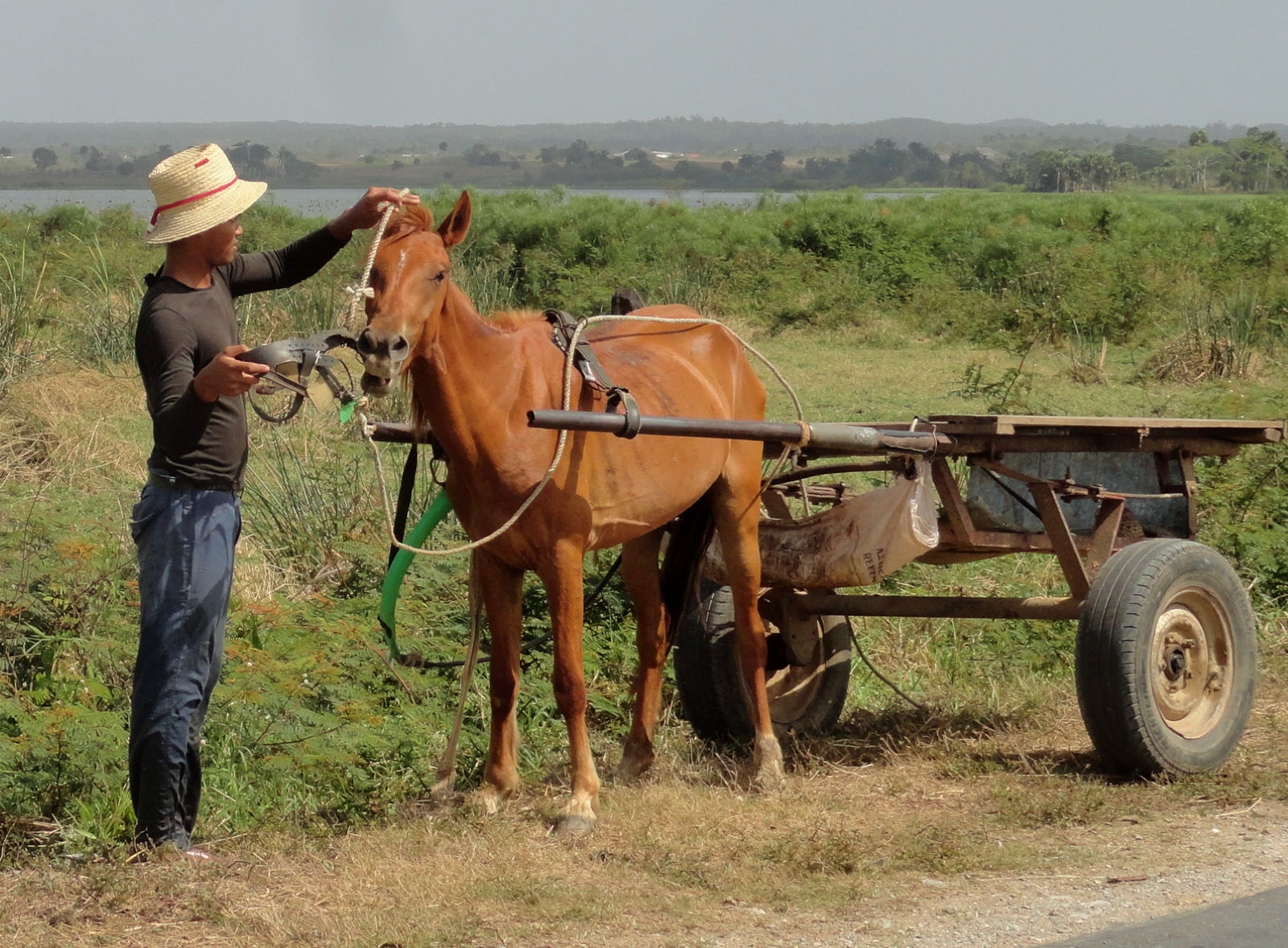 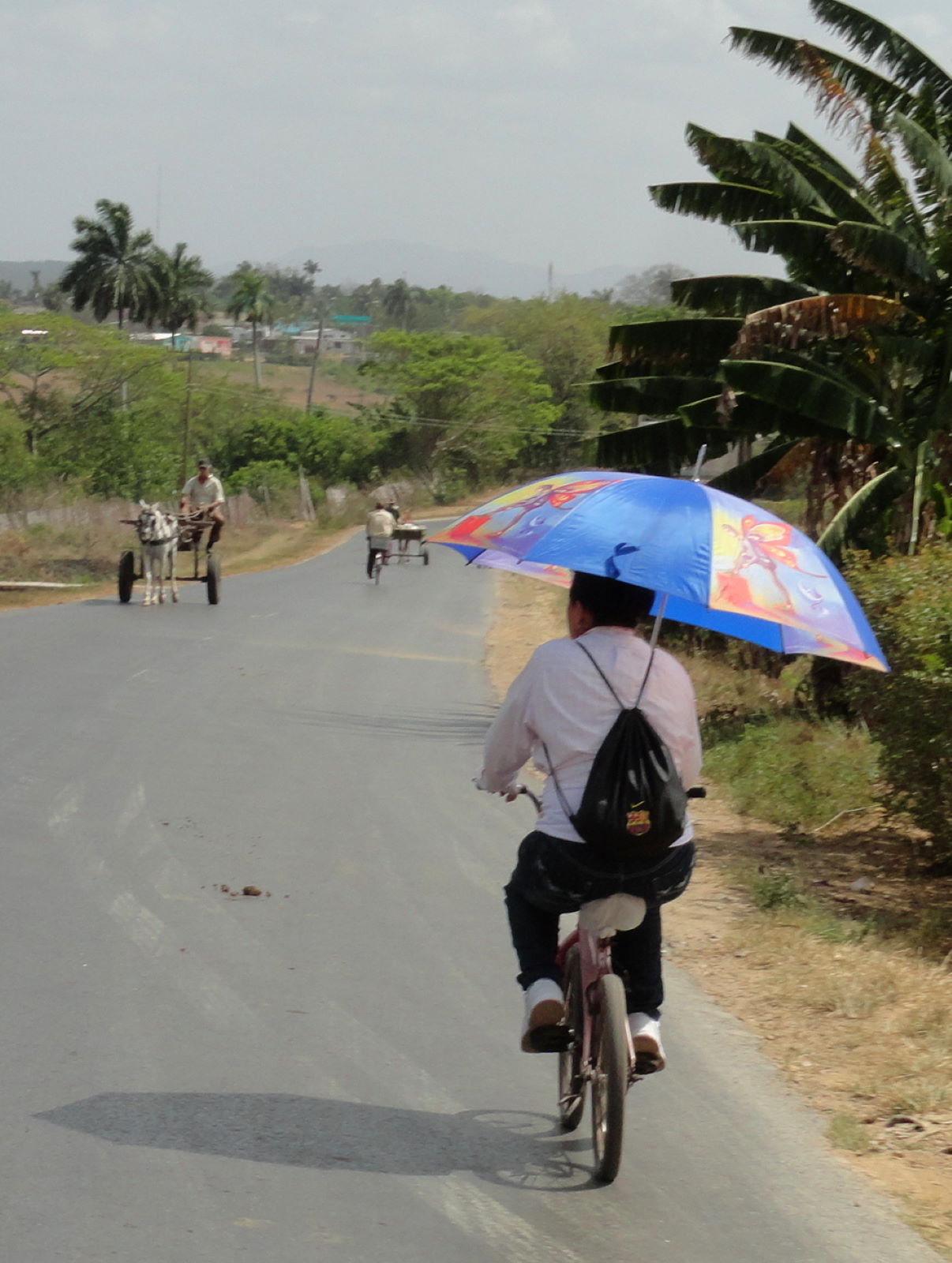 I was in Guane for its tiny train station, hoping to get to Pinar del Río the easy way. (Not the faster way, of course. Cuban trains go slower than cyclists. Even me.) But there had been no easy way to check the timetable in advance.

In fact, I’m not sure there is even a timetable, let alone a website displaying it, let alone any internet access to find it.

Even ticking over, as passengers laconically clambered aboard opening, shutting and re-opening doors, the engine was generating not ‘steam’ but ‘vast black cumulonimbus clouds of sheer poison that would have put Bikini Atoll to shame’. Hmm; funny how the picture doesn’t show it (pic).

I bought my ticket from the dusty, sleepy kiosk. My two-and-a-half-hour trip cost $1.70, the foreigner rate no doubt: locals evidently paid 1.70 pesos. I hauled my bike into the goods wagon at the front. 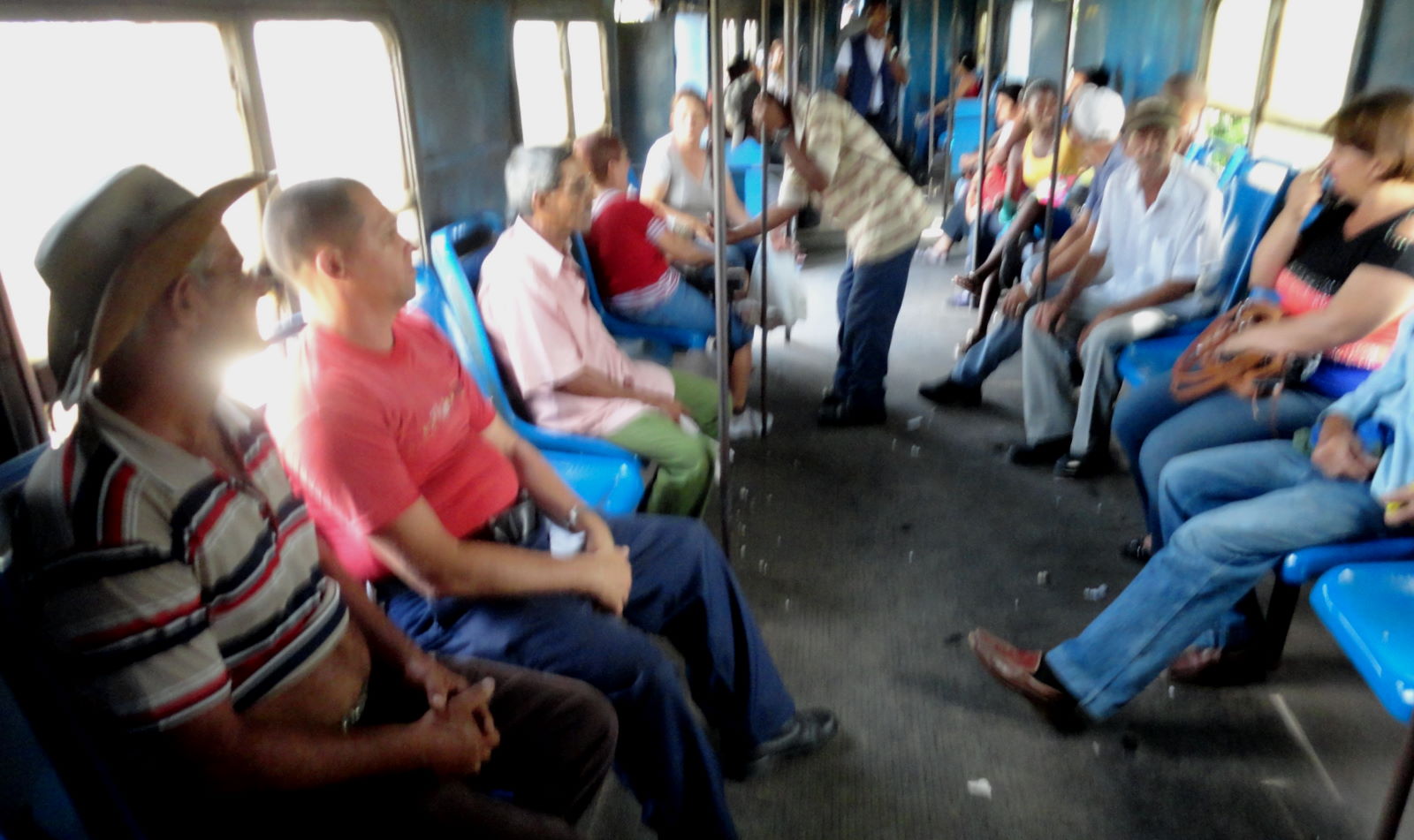 Cuban trains are notoriously slow, shabby and underfunded, and this wasn’t exactly up to German standards. The seating section (pic) was all bare painted metal with sideways plastic seats and bare metal grab rails, like some 1950s industrial tin shed minimally upgraded to a military canteen. The goods wagon was like some 1950s industrial tin shed downgraded for abattoir-bound cattle. 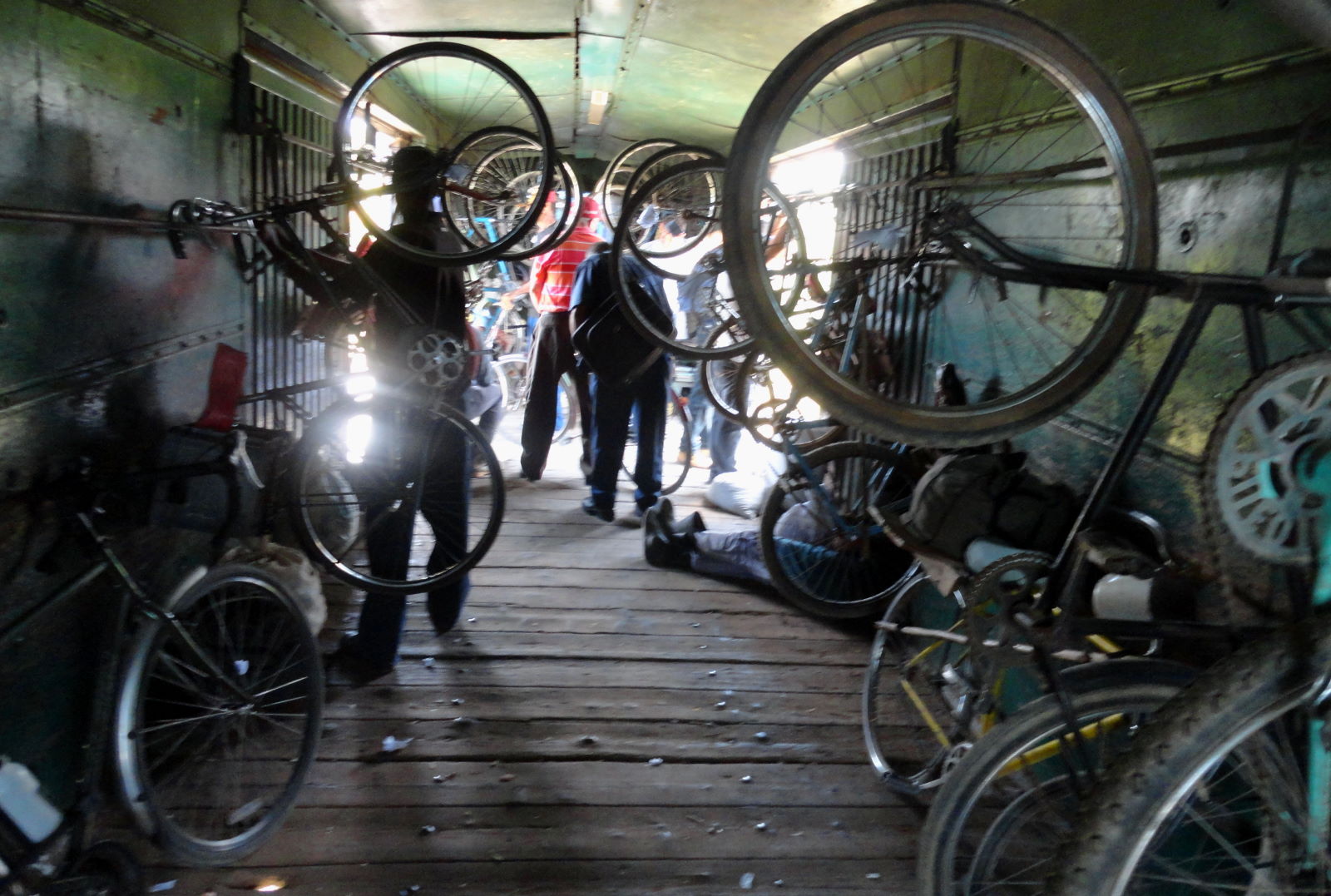 The train filled up as we clanked and bucked wildly, and very slowly, through the west Cuban countryside, and I wasn’t the only person travelling with a bike. There were nearly 30 on board at one point (pic), most suspended by their handlebars from a bare metal rail that my drops wouldn’t fit on.

Overall I was delighted with my train experience, mostly because I won’t ever have to ride a Cuban train again. 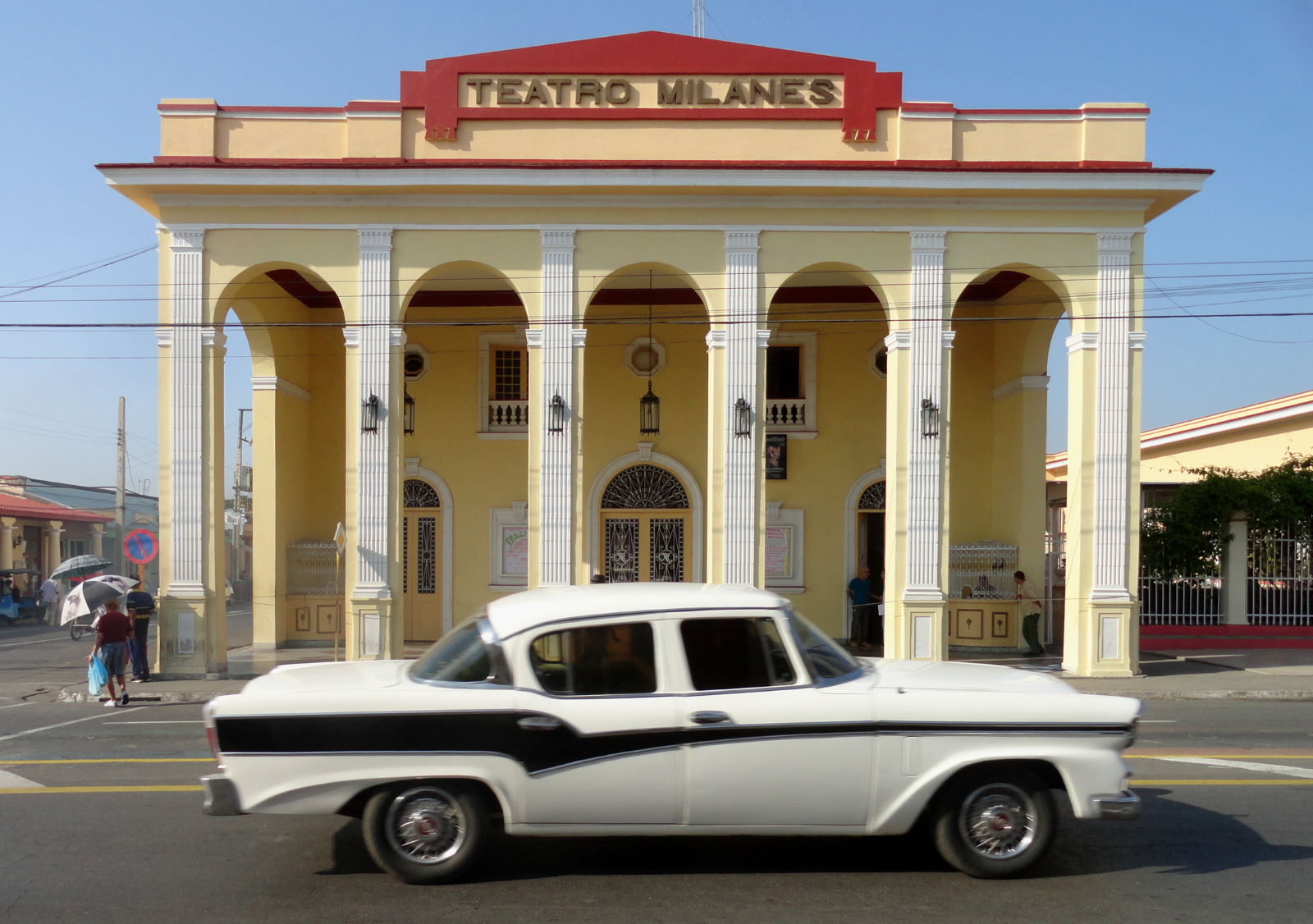 At long last we lumbered into Pinar (pic). It’s a likeable place, lively and easy on the eye, with a bustling centre, a lot of nice painted colonnaded buildings, and some striking art deco facades. 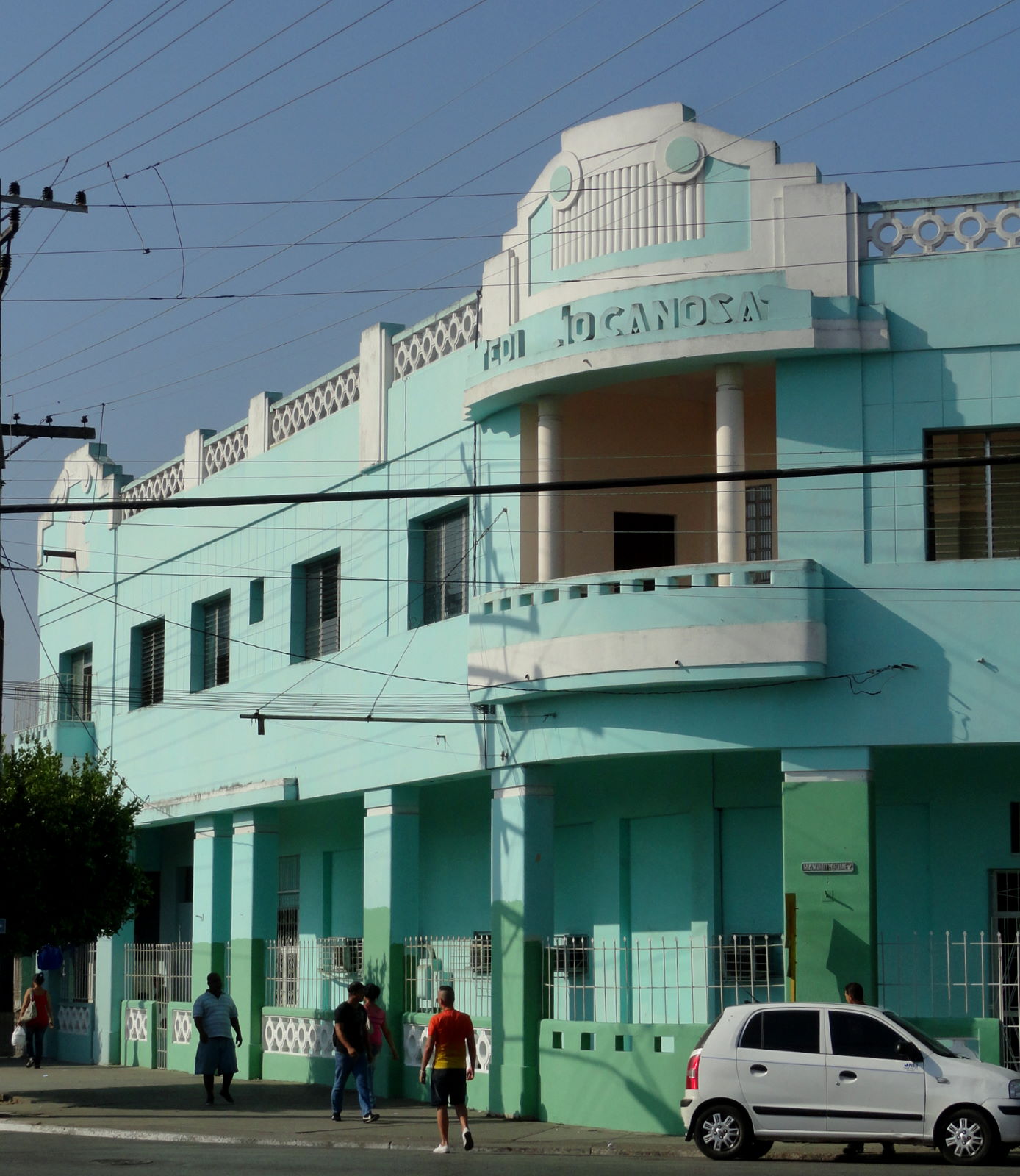 I checked into an ensuite room in a very nice casa recommended in the guidebook, in a pleasant art-deco-y part of the town centre (pic).

But there was a lot of banging, hammering and drilling from next door, who were evidently knocking down an extension, building a new one, and destruction-testing a cement mixer simultaneously, so the casa owner used me as a bargaining chip to get them to stop for the evening.
We had a plan. He did all the talking, explaining that I was an important writer from England hoping to encourage people to visit Pinar del Río, but with all that din I couldn’t write my article; I frowned and shrugged in an I’m-trying-to-help-us-all-here sort of way.

The twin notions of respect for artistic endeavour, and desperation for hard currency, did the trick. We had peace and quiet for the rest of the evening. 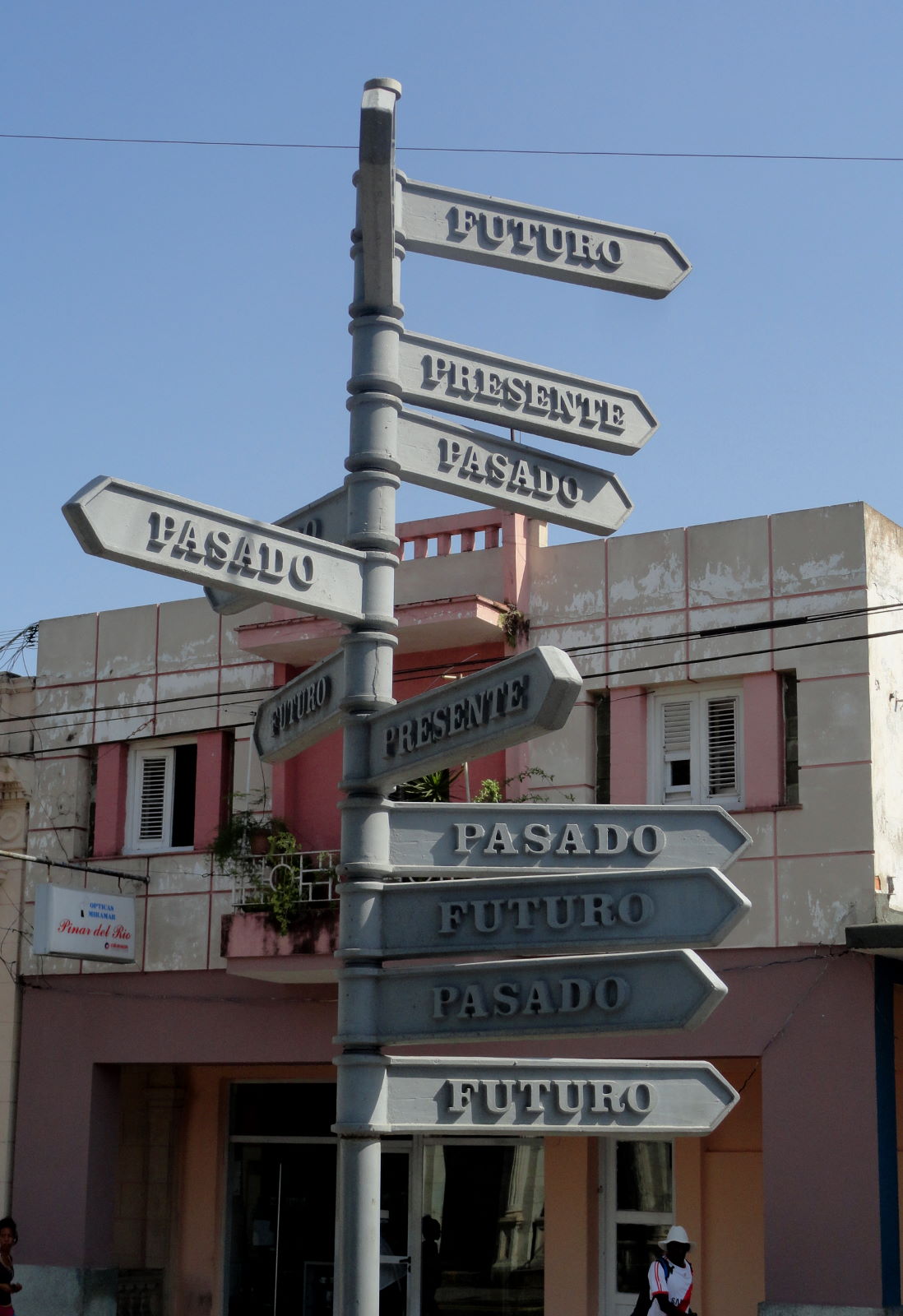 So, with plenty feel good about, I walked out for a celebration beer or two at El Rápido in town.

This cheery signpost (pic) seemed appropriate for the occasion: today was not the End of Something, it’s the Beginning of Something Else.

I just don’t know what that Something Else is yet. 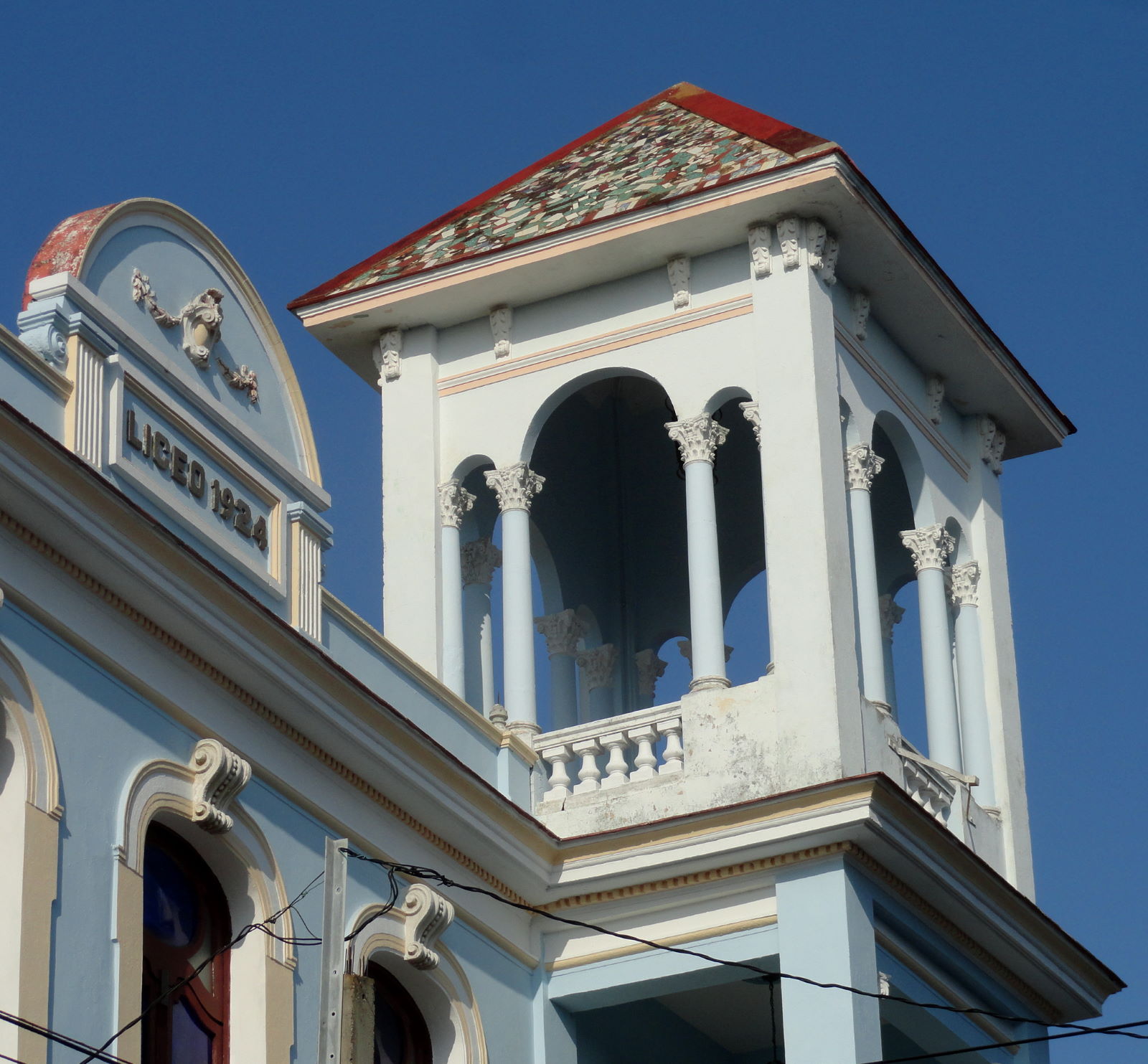 Anyway, as I wandered round the sunny centre (pic) I found an internet cafe with, astoundingly, no queue.

Most of my session was taken up deleting spam emails that had built up in the last two weeks rather than maintaining my social media profile.

I’ve had more lobster in the last fortnight than prawn cocktails in my life, and was rather fed up of them. But the owner had clearly been very keen for me to opt in to the lobster dinner, mindful of his profits. At $8, I could hardly disappoint him, so I signed up for the similarly inexpensive slap-up breakfast too.

I enjoyed the ideal accompaniment to it (the dinner, not breakfast): a bottle of cheap Spanish white ($3.85) from the offie down the road, chilled in my room fridge.

I lounged about my apartment-like room all evening, watching a US film on telly, the onslaught of English unfamiliar; I had to rely on the Spanish subtitles at some points.

So, my End to End of Cuba is finished. And it was fantastic. A once-in-a-lifetime experience. Never again.