Knowing that I’d be in Havana later on, to sit out the spare days between the end of my trip and my flight home, I decided to bypass the capital today and head on to the Comedy Capital of Cuba, San Antonio de los Baños. (I was told by various locals that you’re not allowed to cycle through the tunnel to the capital’s Old Town, so I’d have to take the southern by-pass anyway.)

Signage was sparse and cryptic, so I navigated my way through the southern suburbs by Cuban Satnav: in other words, asking people.

It was all shambolic factories, nondescript grey buildings, scruff and fumes. Eventually I found my way to the autopista west, which I knew would take me the right way. I chugged along it till the turnoff south to San Antonio de los Baños, just after which was what I had been looking for all along: a friendly local kiosk selling me refrescos and the best hamburguesa so far for pesos. I wasn’t now far from San Antonio, perhaps just one and half fruit juices.

I admired the remarkable University of Information Science and its grounds (pic), the project aiming to computerise Cuba. From the look of the half-finished buildings, it appeared progress on this project was even slower than mine. But it did mean wide, smooth, empty roads, waiting for traffic. 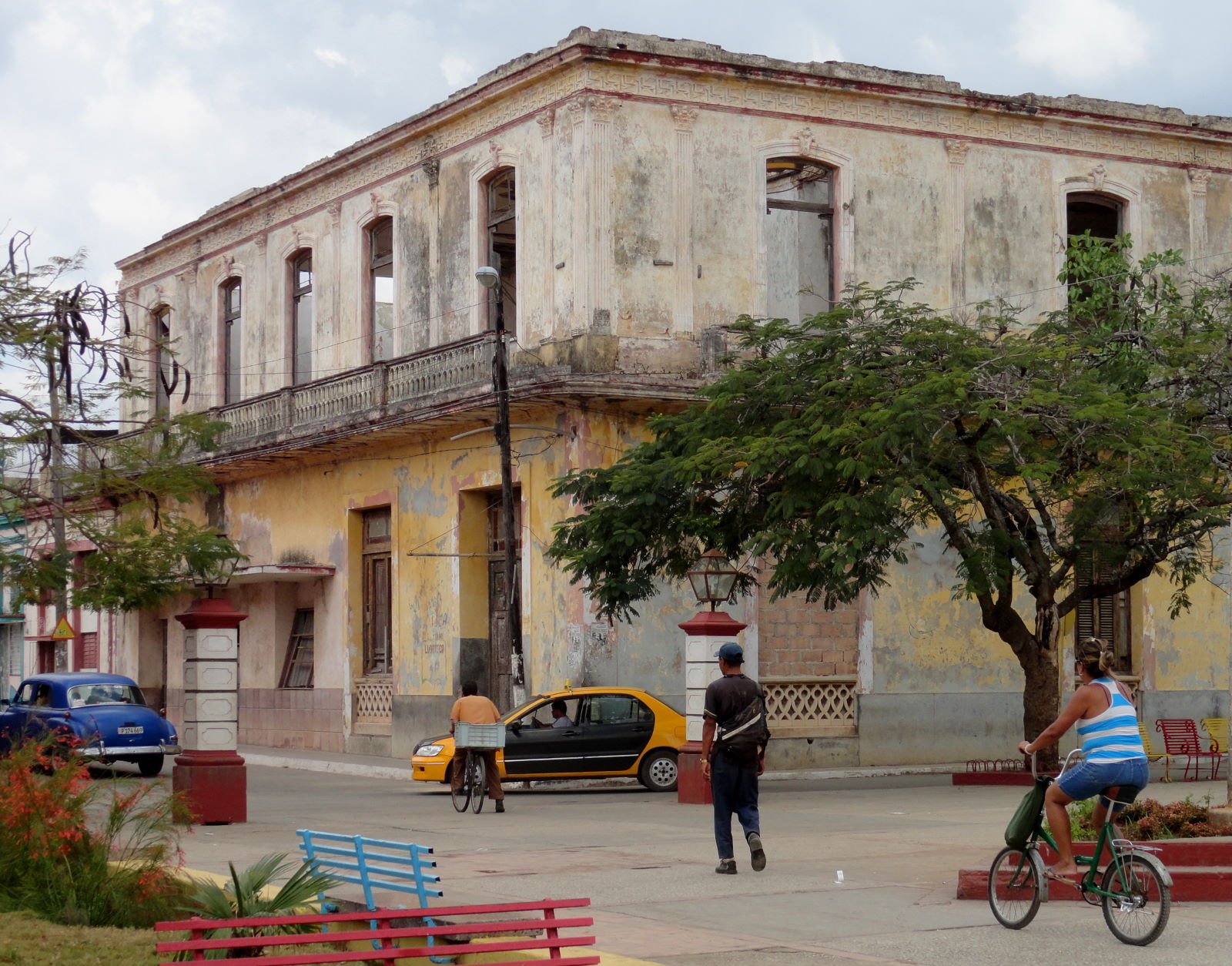 I got to San Antonio around midday. The shabby but lively town centre looked inviting (pic)…

…with posters still up for the recent annual festival of humour (pic). I asked around for accommodation, found what appeared the town’s only option, handed over my $20 and clambered up the pokey, creaky stairs to my room.

Strictly, foreigners weren’t allowed to stay in the town; no paperwork was filled out for my stay. This place was Cubans-only, and they’d pay the local rate of 20 pesos. And even they were getting a bad deal.

Perhaps one day I’ll create a website called Hobson’s Guide, with details of how to survive the Only Choice in Town. This room offered comfortable, silky accommodation with complimentary snacks, but only if you were a spider exploring the cobwebs that decorated every crevice for trapped flies.

From a less arachnid and more mammalian point of view it was the worst accomm I’ve ever stayed in. And I speak as someone who stayed in Delhi’s most dismal in the 1980s.

The casa room’s walls were peeling and bare, the floors were dusty, and there was no furniture except for a grubby bed. I wouldn’t have leant my bike against the sheets for fear they soiled it, not the other way round. The window didn’t open and the door didn’t close; the bathroom tap ran dry but the shower head dribbled unstoppably.

A loudspeaker pumped a high-volume pop radio station and had no off button. To stop the din I had to disconnect the wires at the back. Before quickly reconnecting them: ah, the radio was there to drown the noise from the adjacent rooms. A noise which was either emergency dental work being conducted without anaesthetic and with pliers, or else highly energetic, and I suspected transactional, sex.

Hmm… perhaps this explained why I was asked at check-in not how many days I wanted to stay, but how many hours.

To calm down, I opened one of the bottles of water I’d bought from the street vendor outside and drank. And spat it out immediately. The water tasted vile, of rotten cabbages. How does water go off?

Rob, you said you wanted to experience the Real Cuba. Well, here it is. I felt anxious, trapped and vulnerable for a while, and thought about cycling off to take my chances elsewhere. 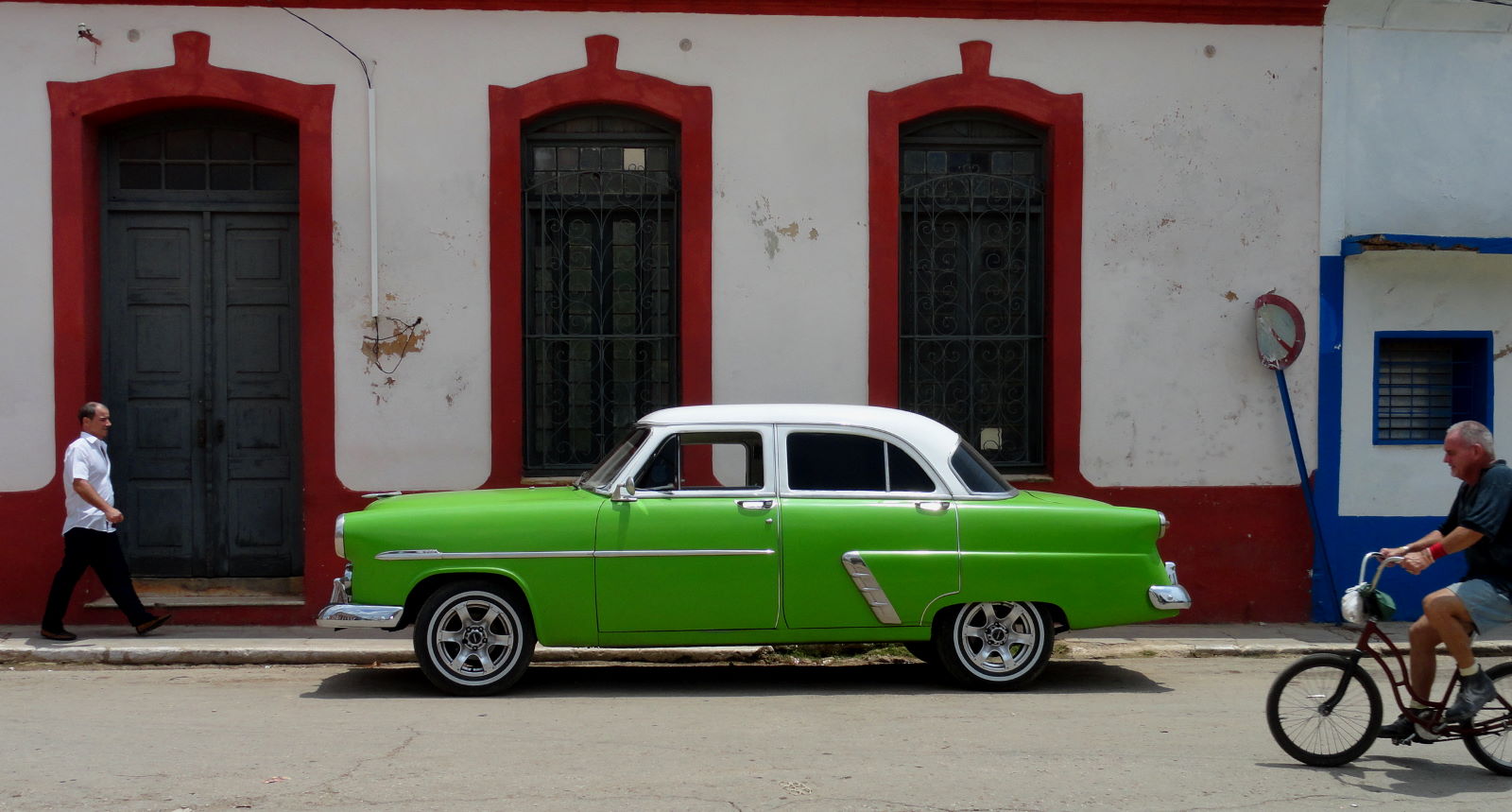 But gradually I rationalised things. I had my own padlock for the door; I had a sheet sleeping bag to laminate me from the stained bedclothes; I had pesos in my pocket and a friendly-looking town centre (pic) a short walk away.

So, without showering (I doubted that I would come out any cleaner than I went in), and having put my toxic water to good use by flushing the toilet with it, I went straight out into town to look around.

And things got better, as they always do in Cuba. The Museo del Humor was just round corner from here (pic), so just beyond earshot of my energetic fellow casa guests. The staff thought I was Cuban (I think because I seemed poor-but-happy and scruffy-but-fit, rather than for the quality of my Spanish) and so charged me only two pesos. It was basically a collection of cartoons, most clumpingly obvious in their labelled symbolism (pencils=authorial freedom, doves=peace, bombs=war etc), but I spent a happy hour or so poking around. 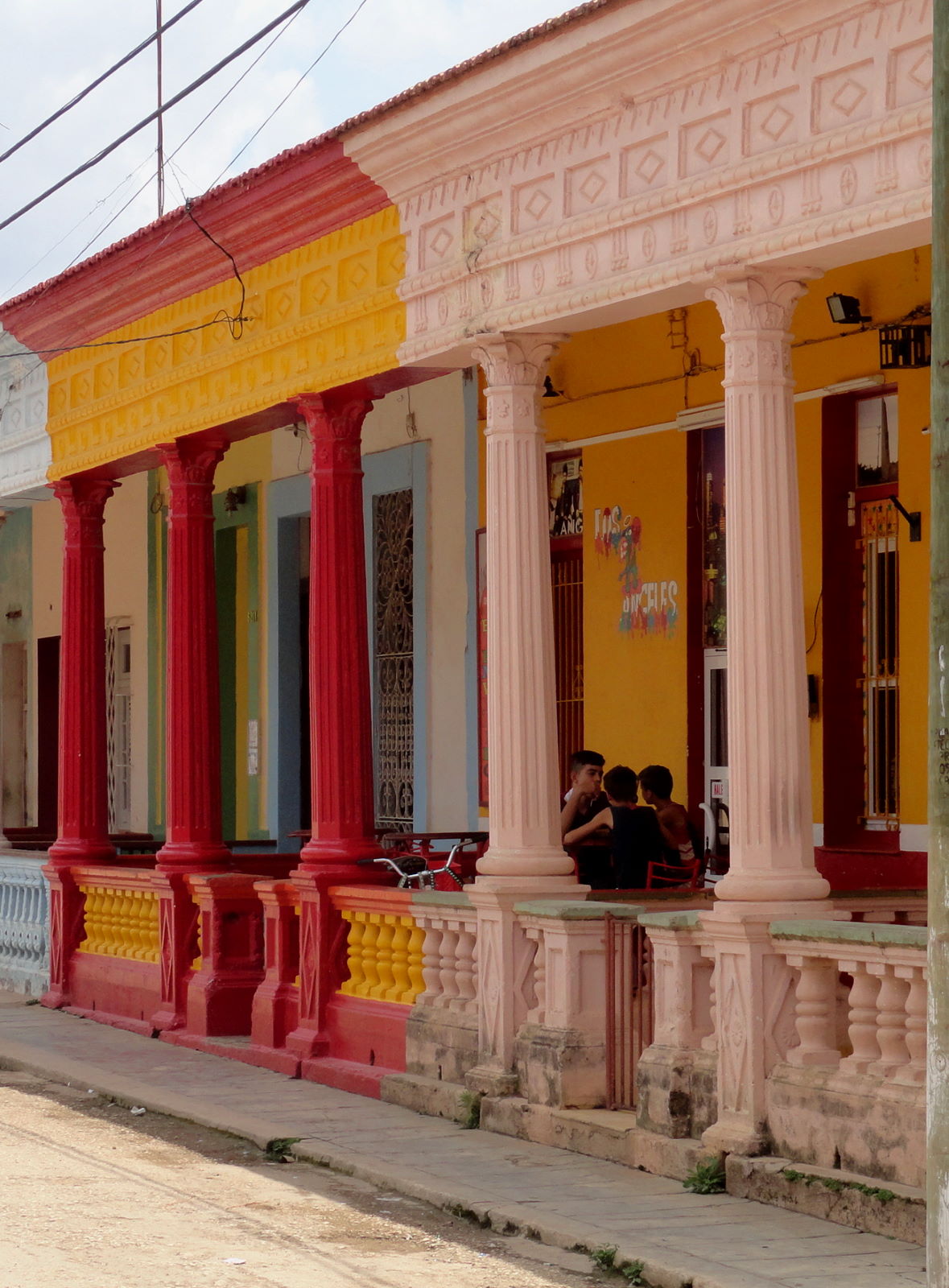 Humour, especially satire, finds it notoriously difficult to jump cultural divides. While I understood the Spanish, I usually didn’t get the jokes (though I did laugh out loud at one of a bemused Jesus being presented with the bill for the Last Supper).

Beer, on the other hand, jumps cultural divides with ease. Round the corner (pic), I had some at El Rápido, the cheapo fast-food bar chain that’s becoming a regular haunt for me. Real Madrid were playing Málaga on the telly, watched by the rapt staff. 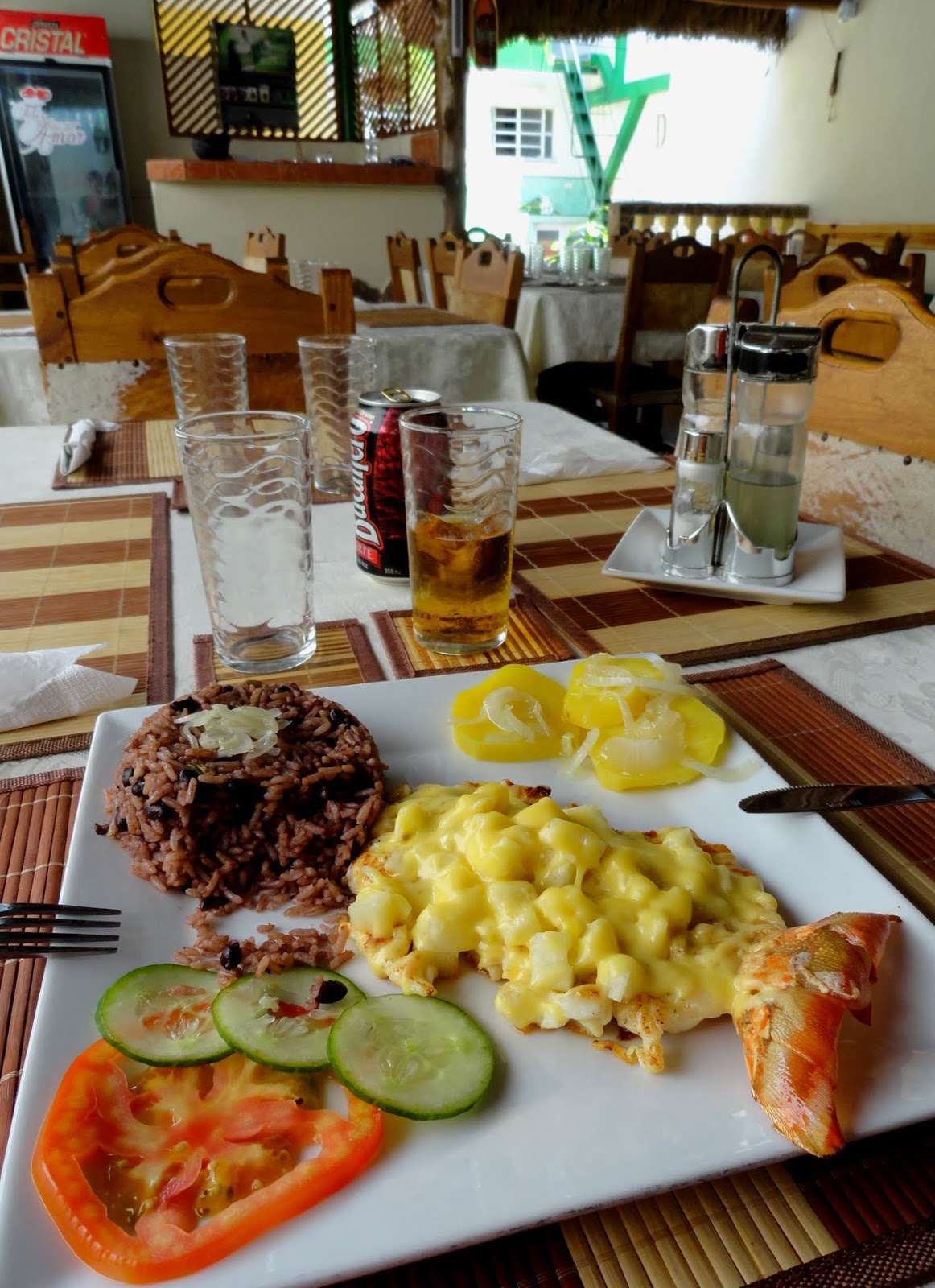 Then I wandered up to find Don Oliva, the ‘cheapest lobster in Cuba’ place recommended by the guidebook.

I wasn’t disappointed: a tail covered in cheese and pineapple cubes, with rice and salad, all perfectly tasty, for $6 (pic).

I chatted amiably to the waiter who was the right sort of chatty, developing my Spanish, and so I did something extremely rare for a Yorkshireman: I tipped him.
I staved off the horror of returning to my room with more beers at The Fast One, and trod gingerly back to my squalid little cell with a bottle of coke in a desperate attempt at hydration, and a carton of rum in a desperate attempt at sleep.

Ah well, maybe a sense of humour is necessary for a visit to San Antonio. And Cuba. But it certainly seemed a place quick to laugh: in several shops and stores I heard and saw people chortling away in good-humoured banter, and shop staff were always up for a smile and a joke. In one little refresco stop there were three guffawing local woman, generously including me in it all, laughing at anything I said. I don’t think they understood exactly what I was talking about. Neither did I.

Most enjoyably of all, there were the celebratory wall illustrations in El Rápido, cartoons and funny twists presumably on po-faced official health notices (pic):

Dicen que el alcohol mata lentamente – Yo no tengo apuro
(‘They say alcohol gradually kills you – I’m not in a hurry’).

So, you know what, I’m pleased I came to San Antonio. I laughed a lot. Once I’d escaped that room… cheers!