First, know which Derwent we’re talking – England has four of them. The other three are all quite lakey: the Cumbria Derwent supplies Derwentwater by Keswick; the Derbyshire Derwent fills the Derwent Reservoir in the Peaks; and the County Durham Derwent tops up another Derwent Reservoir up beyond Teesdale.

I’ve cycled round all those ‘Lake Derwents’, but of course there’s no such jet-skiable expanse of water on this, the longest and best river of the four, the Yorkshire Derwent. Or so I thought… 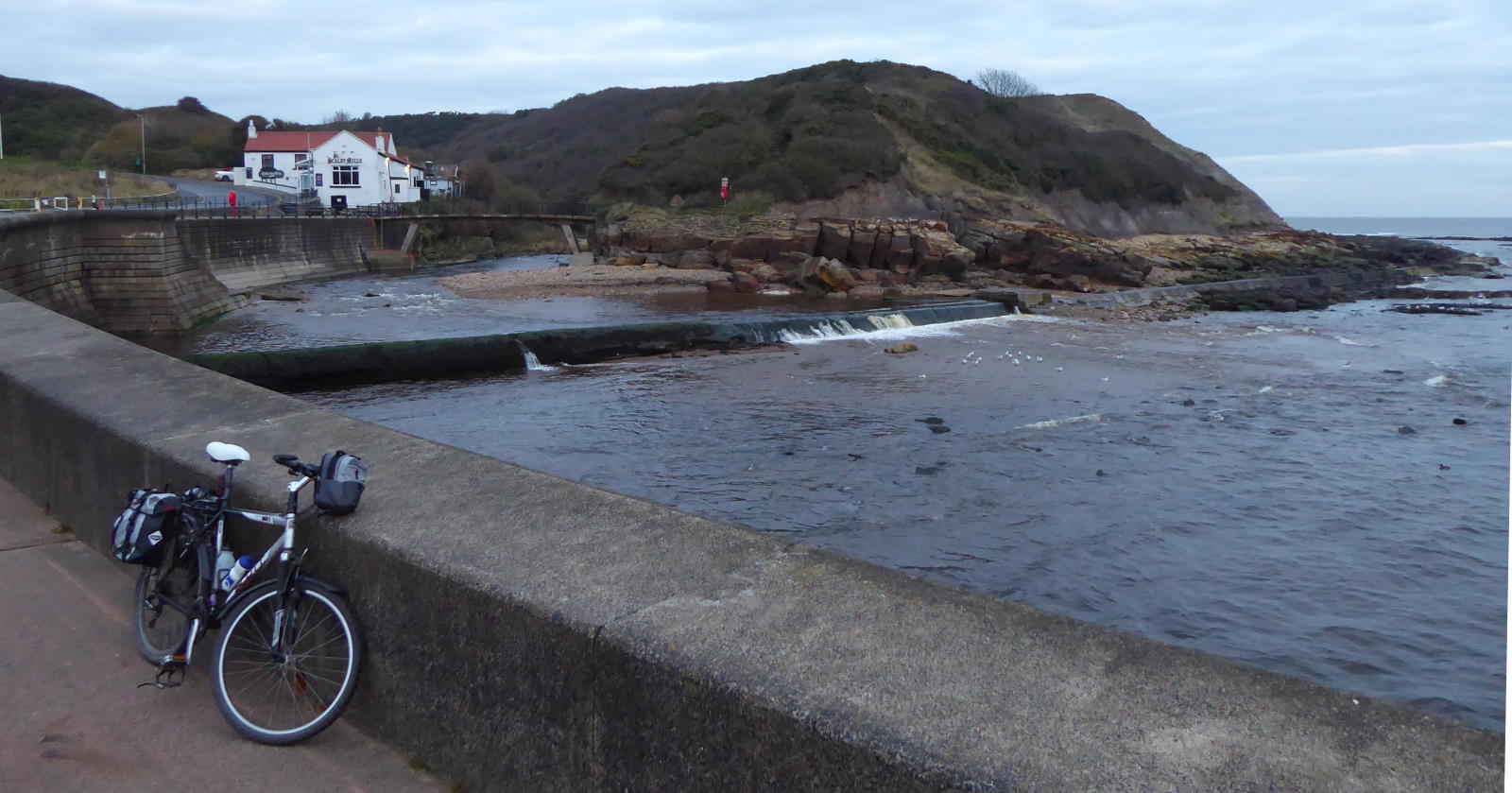 Anyway: getting to the source of my Derwent, up on the roof of the North York Moors, required a long dawn slog up from Scarborough. At the northern bay’s northern end is where the river’s pre-ice age course sloshed it out into the sea (pic). The old channel is kept on as Sea Cut, and used as a sort of overflow pipe.

The twin notions of long periods of time, and pent-up masses of water, had a special relevance to me, as my jump-start morning coffees began to work through my system. 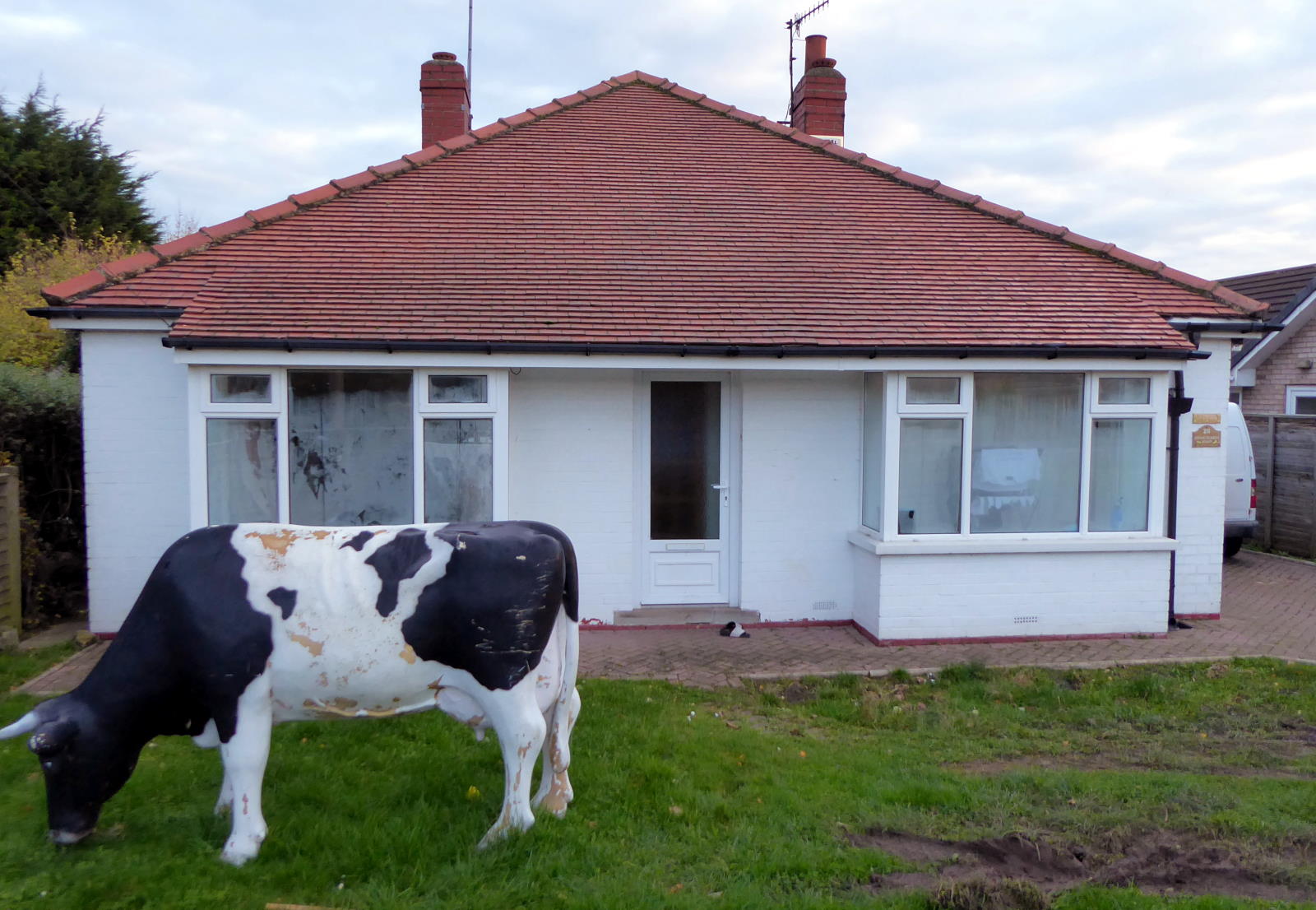 Heading up out of Scarborough I passed this plastic cow (pic). Evidently they don’t go for garden gnomes here.

You can buy such polypropylene heifers online for just over a thousand pounds – about the same as you pay for the real thing.

I plodded up a series of bridleways up into the Moors towards the slopes whose trickling waters gather to create the Derwent (pic). And, following the recent heavy rain, a lot of boggy fields and farmyard-sized puddles, too. 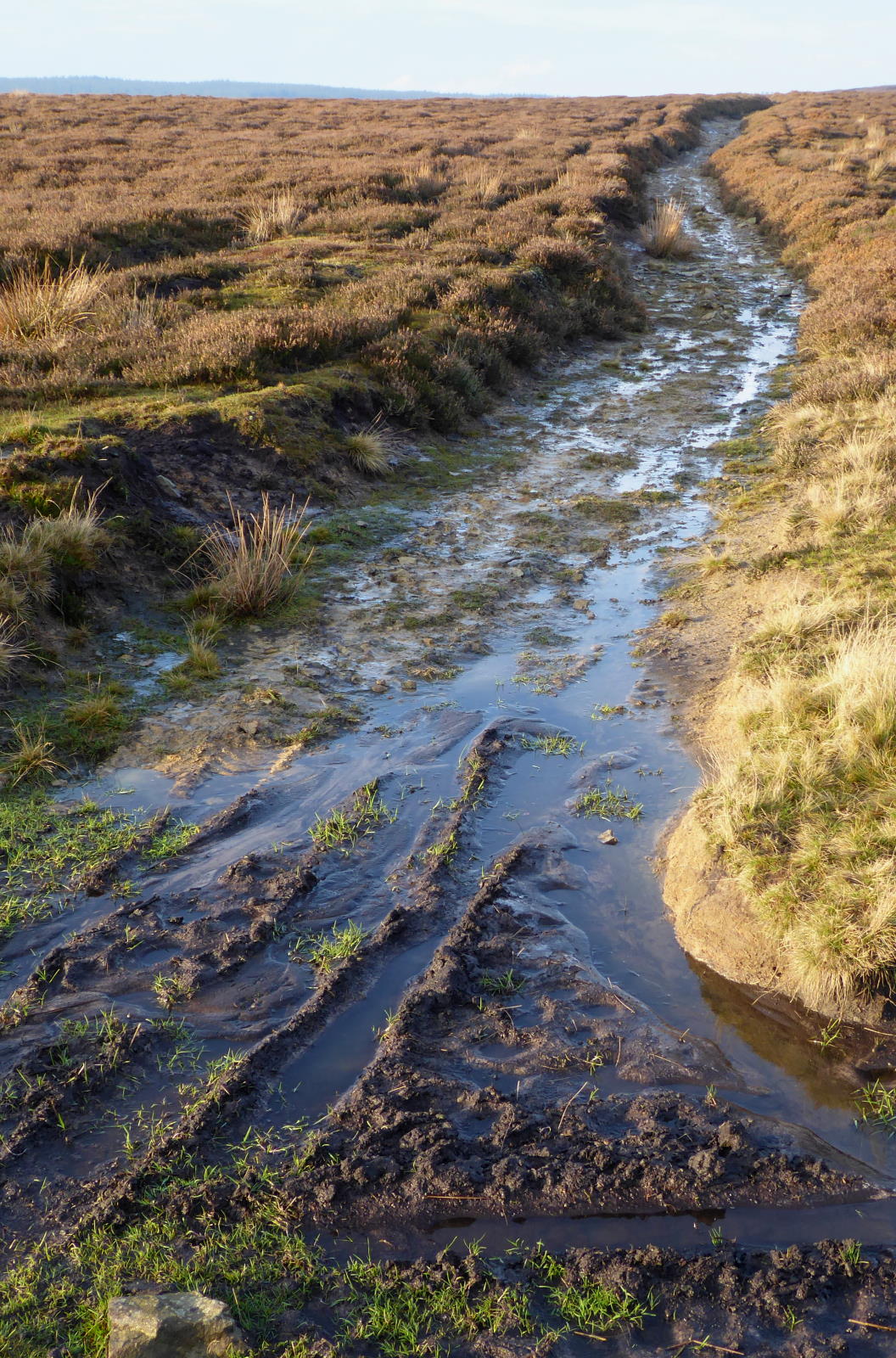 It was a bright calm morning, with not a sound to be heard.

Except that is for the squelch of my boots in the foot-deep mud (pic), and muttered swear words that paid homage to the era of the Angles and Saxons.

There was a lot of pushing and not a lot of riding here. I’m not sure I felt the heather was that lucky. 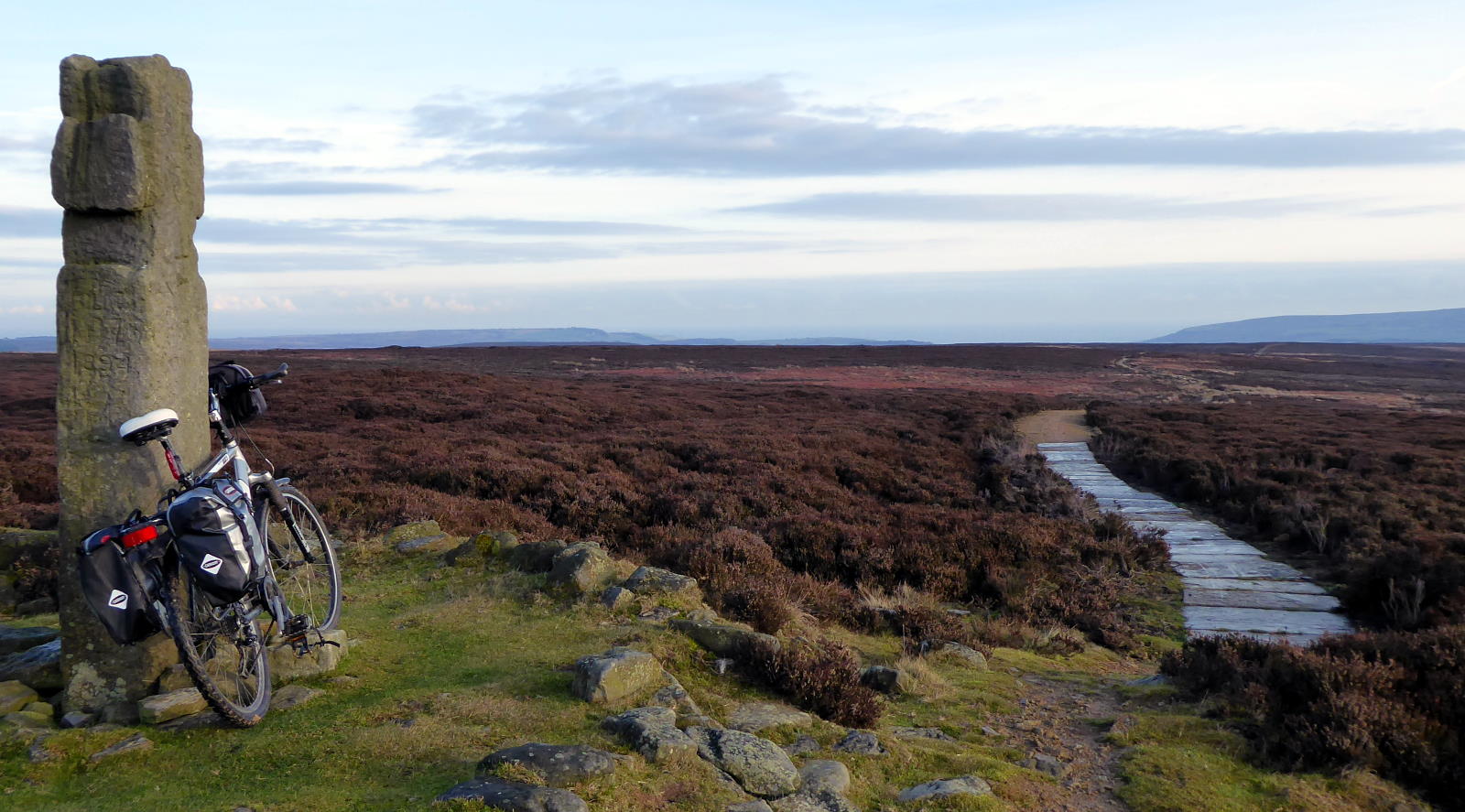 At last I got to the moortop, and the splendidly isolated Lilla Cross (pic). The monument commemorates Lilla, who died protecting King Edwin of Northumbria from an assassin here in the year 625. There are sweeping views of the North Sea to the east… 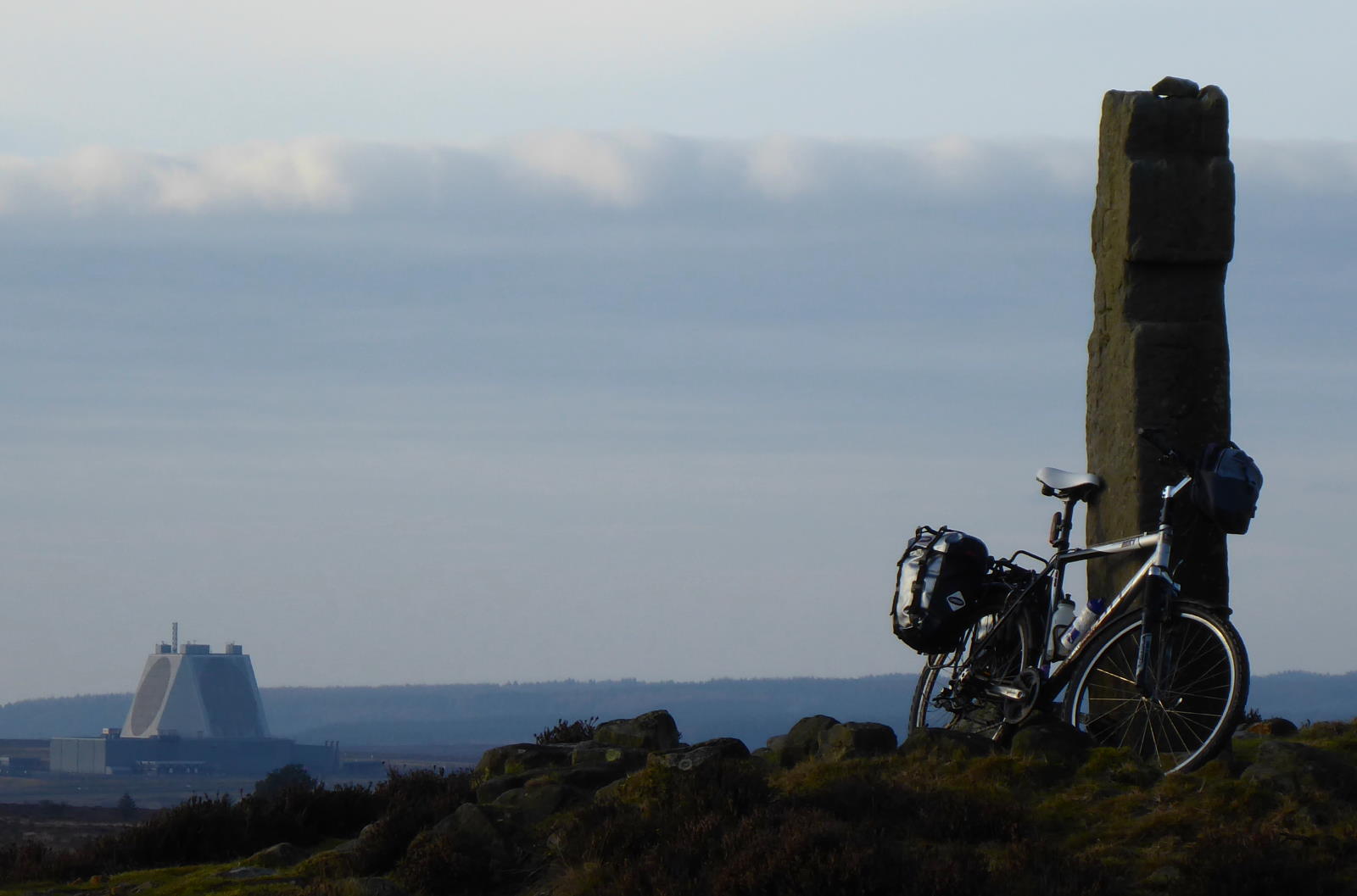 …while to the west is the strange sight of what looks like a giant loudspeaker (pic). It’s RAF Fylingdales, a radar station that watches for missile attacks on Britain.

If the nuclear button gets pressed, don’t worry. Thanks to this 24/7 monitoring, you’ll get four minutes to fulfil your bucket list before being vapourised. But at least you know it’s there to safeguard the population. Of the USA.

(From 1962 to the early 1990s, the radar installation was housed even more bizarrely, in three giant golfballs. It was a familiar sight to Moors walkers: the Crazy Golf of the Cold War.) 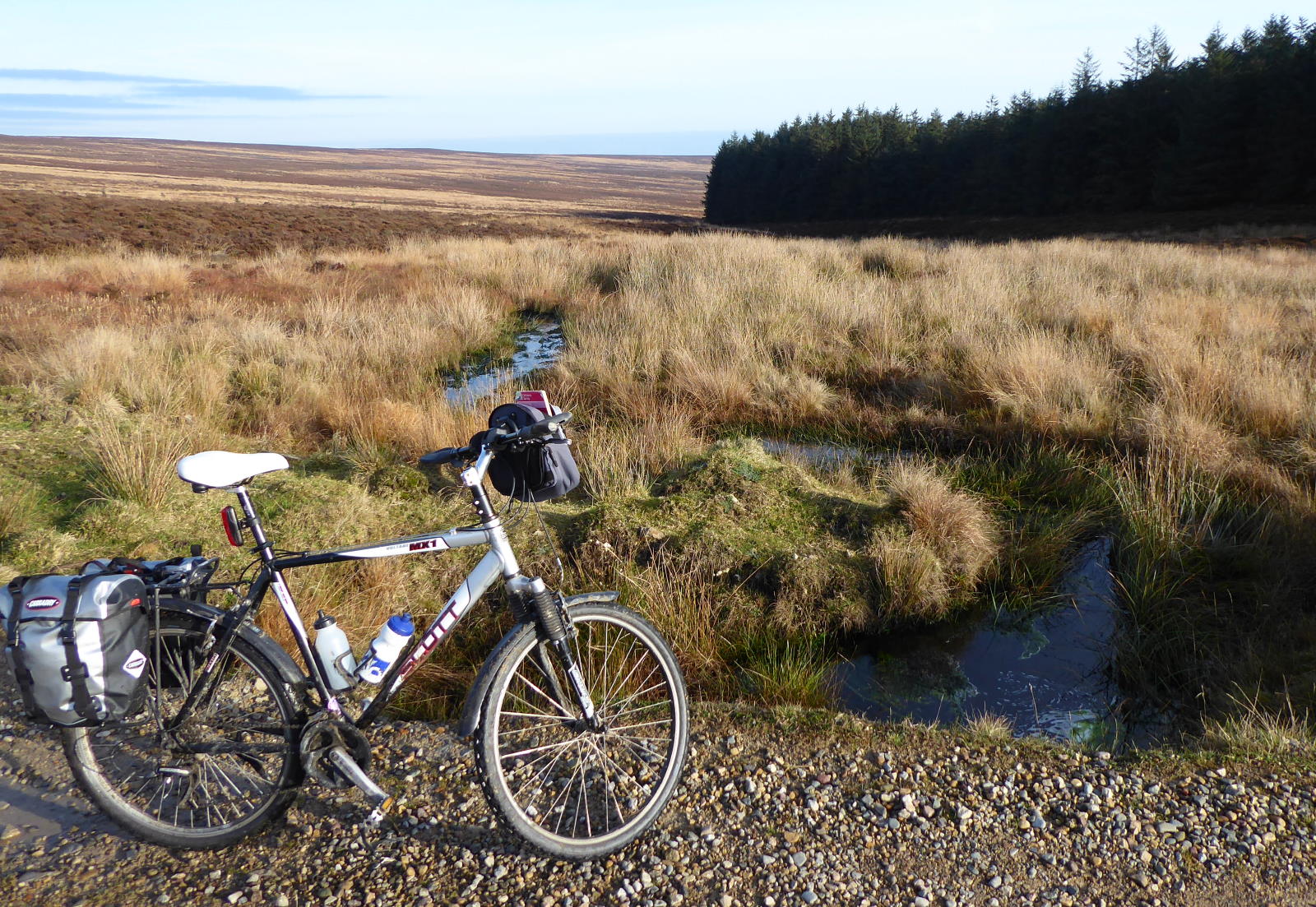 So, now on good gravel tracks at last, I was at the source of the Derwent. It’s right here (pic), where the first dribbles emerge from the spongelike heather. The sea is only a handful of miles away eastwards, the direction we’re looking in the photo, but this water will probably end up tracing a less obvious, slower and quainter, south-west-south route instead. Less exciting but quirkier.

For some reason that makes me think of my career progression, especially the idea of long gradual downhill. 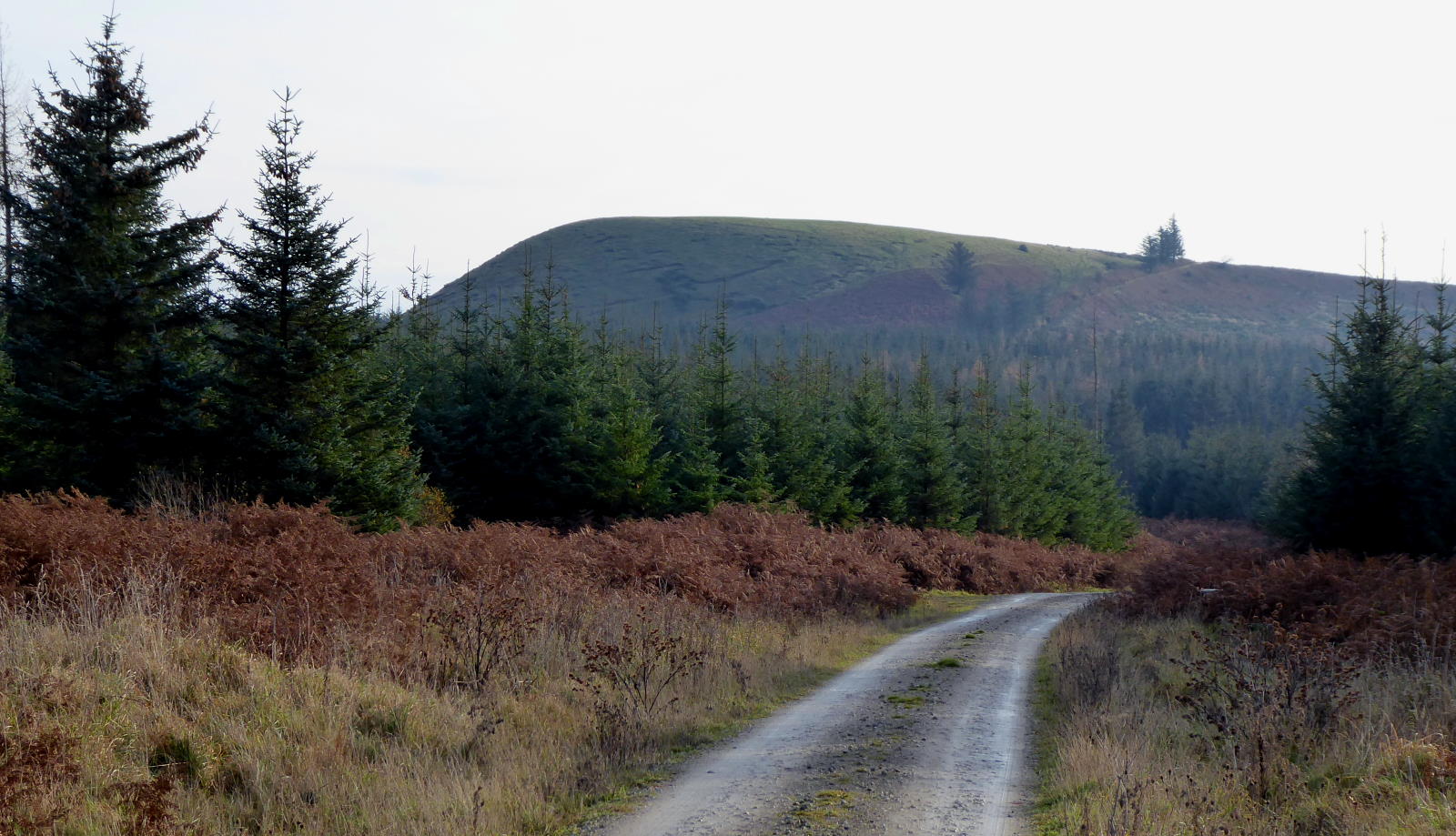 The riding from here was wonderful: an easy freewheel down well-surfaced forest roads (pic) on my trekker, exactly the right bike for the job. The Derwent was away to my left, out of sight, busily slicing its way through the moorland. 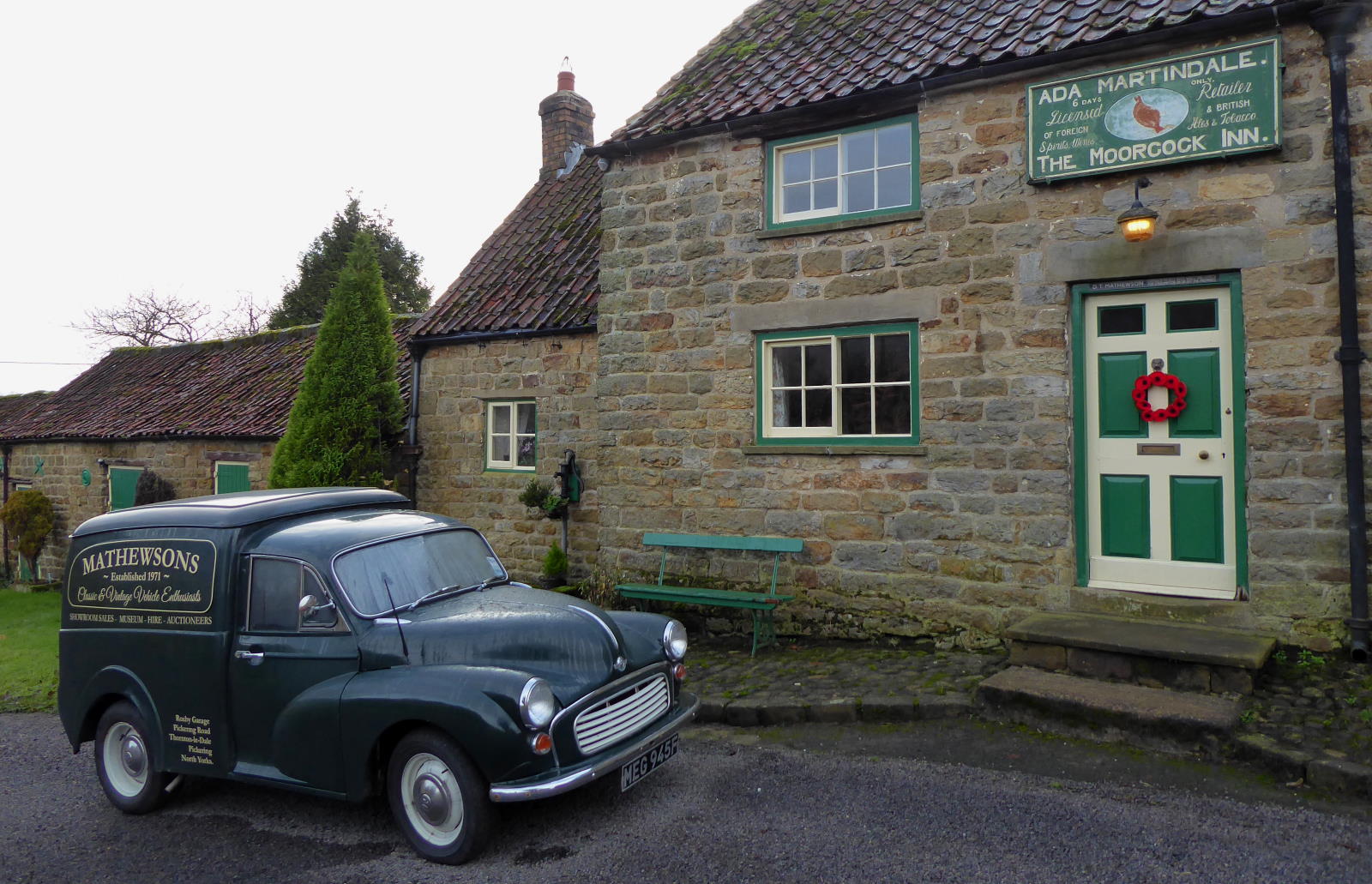 The forest roads became tarmac, and in Langdale End I passed the fine old Moorcock Inn (pic). Until recently this was one of the old traditional rural ‘parlour pubs’, effectively someone’s house where you were served beer from a jug through a hatch in one of their front rooms.

The pub has been refurbed (and is only open Thursday and Friday evenings, which was probably just as well – it would have been tempting, and I only had four hours of daylight left). Nevertheless, it still feels like it’s 1968. It often does in this part of Yorkshire. No wonder they filmed Heartbeat here.

Most families have a black sheep. Here in Yorkshire though it can be the white sheep that feels different (pic).

Round Hackness it feels like we’re in a proper river valley (pic), though one greener and rounder than the plunging limestone dramas of the Dales. But – to my delight – the quiet roads were being plied by day-riding cyclists here too. 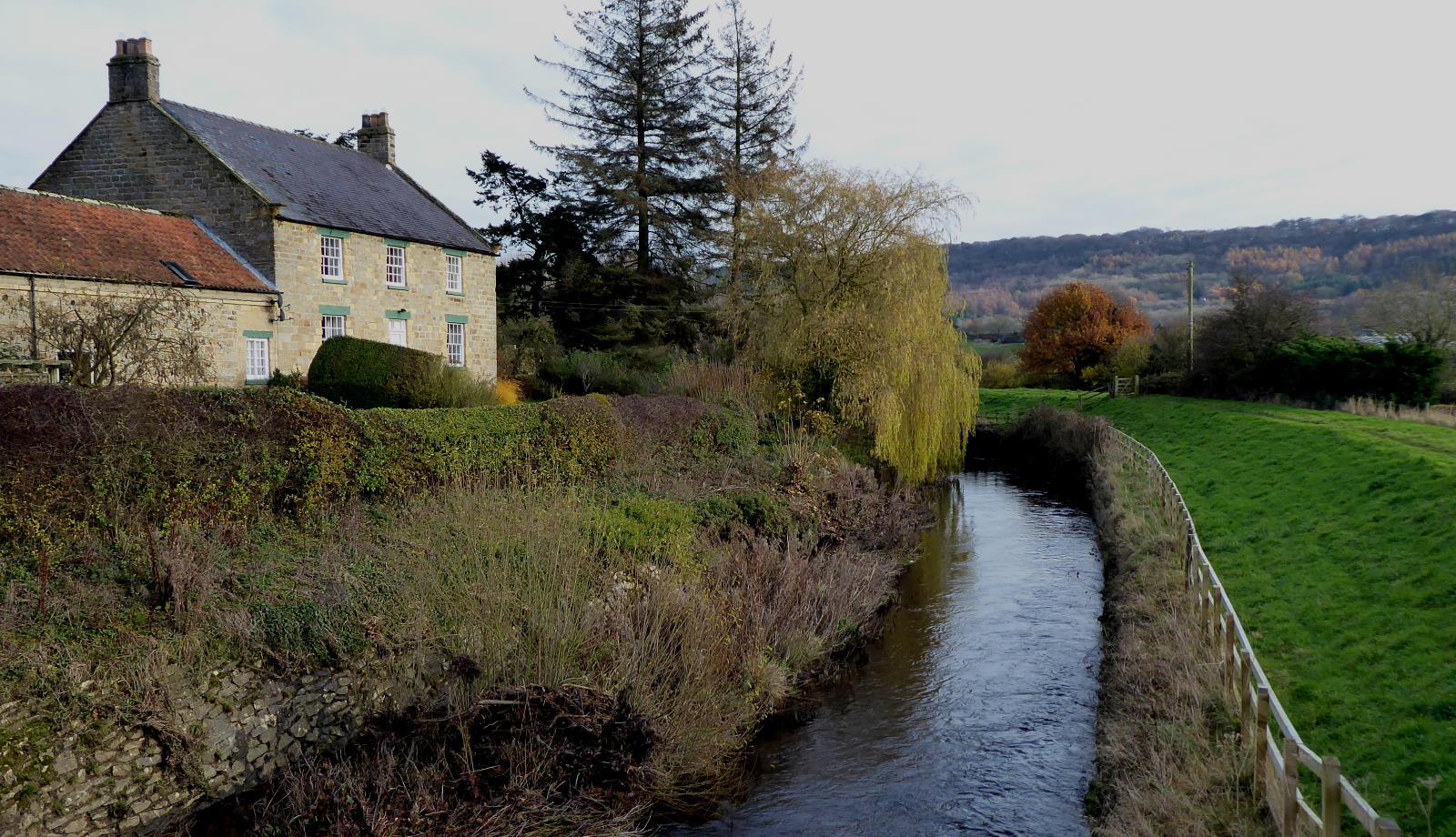 I passed over Sea Cut (pic), the artificial channel that sluices off Derwent floodwaters along the river’s old path into the North Sea, via that outlet I passed at the start of the morning.

The effect of the Sea Cut on the river is to cut its flow dramatically: having built up surging momentum, it abruptly becomes a stream once more, effectively having to start all over again. For some reason I think of my career again.

The next few miles of the Derwent, Forge Valley, are the prettiest. When glaciers blocked the old course several thousand years ago, the Derwent was forced through the hills here. There are riverside paths (pic), and information boards that list the many colourful birds encouraged by specialist feeding stations.

I spotted marsh tits, great tits, coal tits and a nuthatch, bringing my total bird species identified so far this year to four. 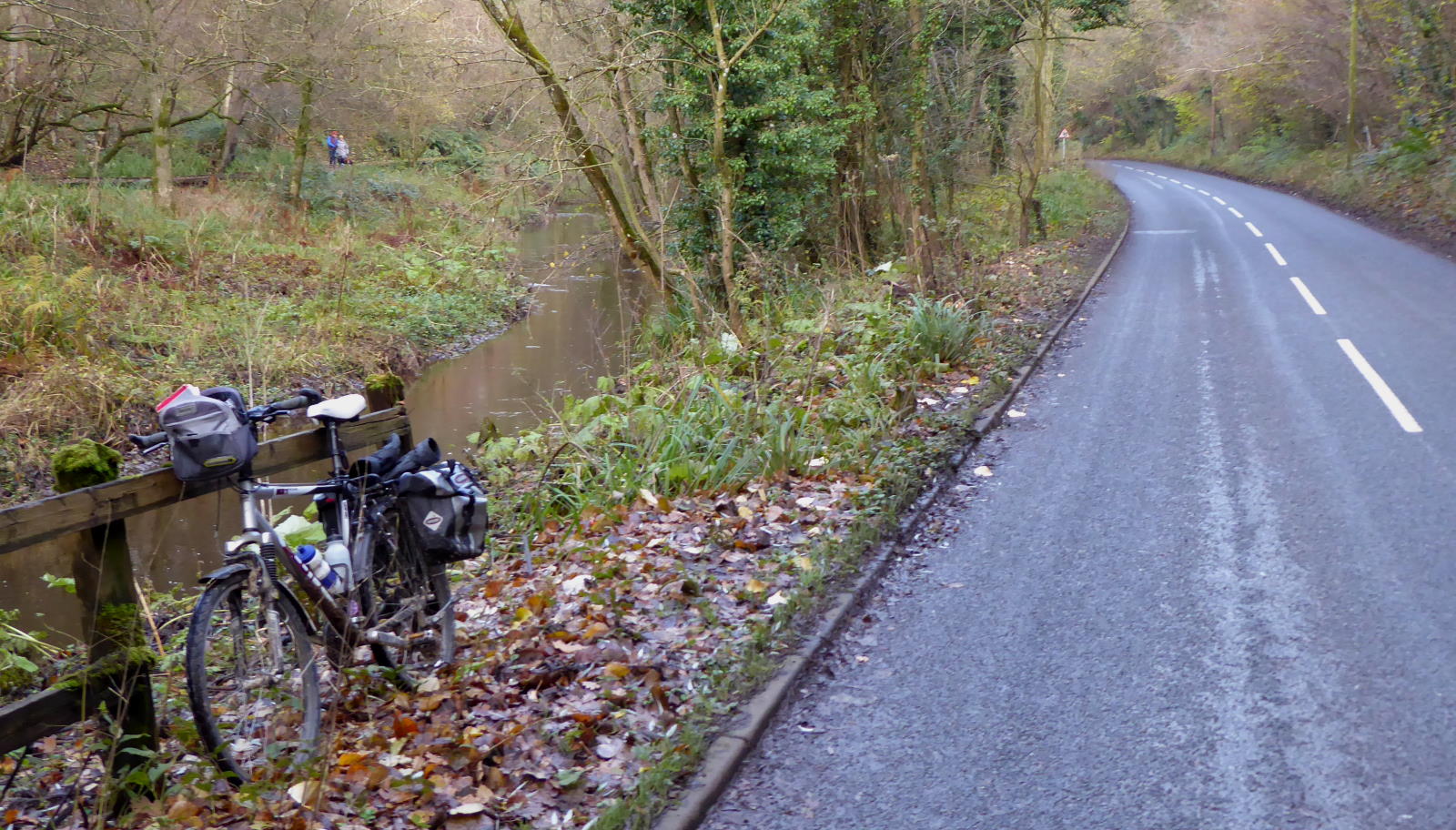 The road follows the river closely (pic). Thanks to Sea Cut, I was cycling alongside the water, not through it.

I reached the A170 at West Ayton, and turned right to head west. A couple of villages along is Brompton-by-Sawdon, announced by the village sign as the Birthplace of Aviation.

It’s thanks to local squire and engineer George Cayley (1773–1857), who not only worked out the basic physics to understand powered flight (which proved very useful to a couple of bike mechanics in Kitty Hawk later on), but tested them out with a handful of pioneering glider flights in the mid-1800s. 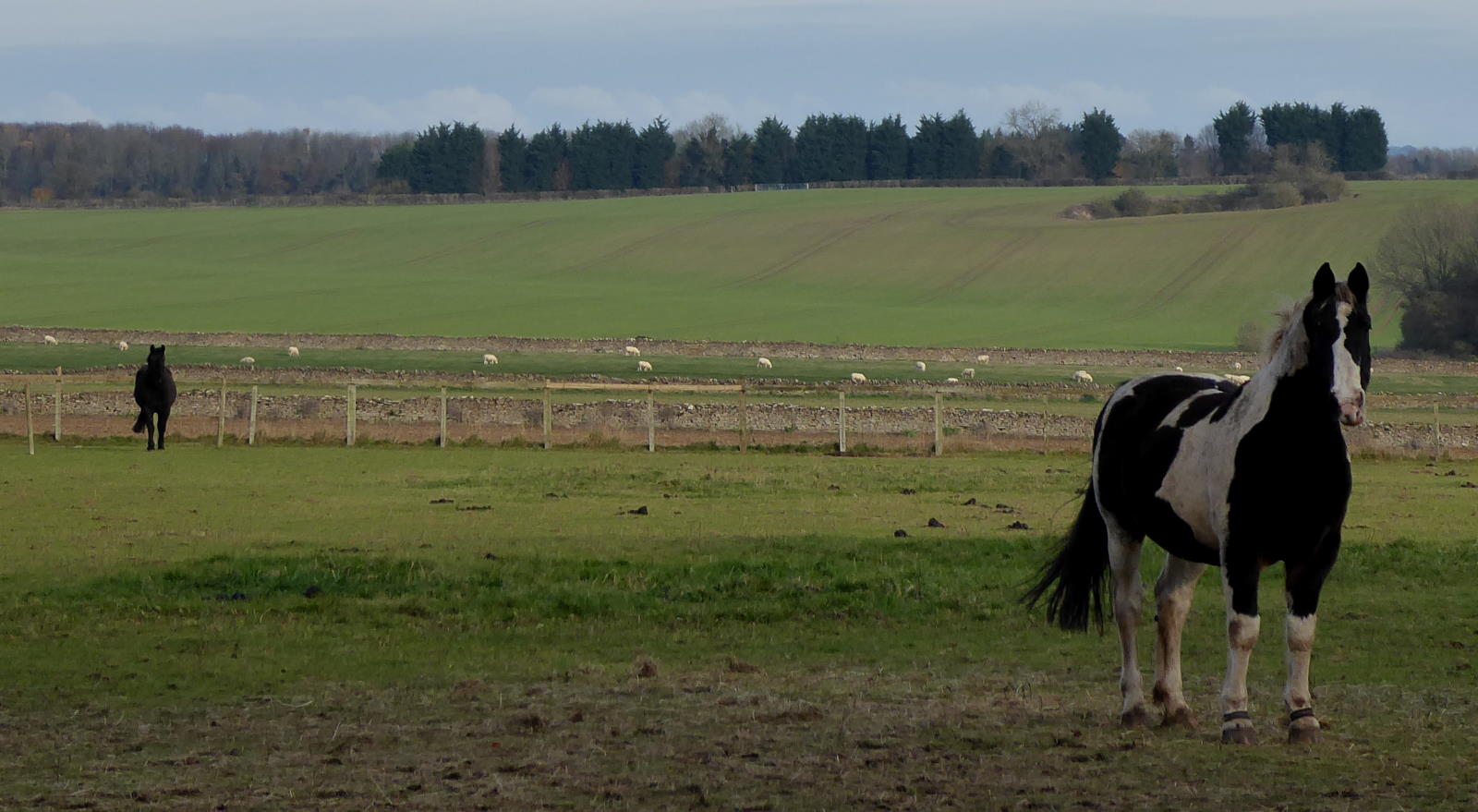 Somewhere round here (pic), within the gaze of this quizzical horse in the fields around Wydale Hall, the first heavier-than-air craft in all history took briefly to the skies. Nobody is sure who that first pilot was – we only have legend, guesswork, and the hazy childhood recollections of a 90-year-old lady. (Another Cayley fan blogs entertainingly about his homage to the site here.)

The Hall is now a retreat, but I get all the quiet time and meditation I need thanks to my bike rides. Right now, rather than finding myself, I was more intent on finding a Greggs.

The Derwent ‘Valley’ here, heading west to Malton, is a wide, flat expanse of farmland. Normally the river is virtually invisible, an obscure small channel discreetly draining the fields either side. And indeed it was invisible today, but for the opposite reason (pic): assailed by the recent rains, the area was now broad wetlands.

So Yorkshire’s Derwent, too, has its own lakes this sodden autumn. Somewhere under those well-birded meres, a small river is trying to locate the sea.

I meanwhile was trying to locate a train home. I got to Malton and missed the hourly service to York by two minutes. Excellent timing: it left me maximum opportunity to warm up in front of a pub fire before the next one…