Create Routes
or Search for a route
from millions at MapMyRide

The second of my Rivers Rides was a two-day, 58-mile trip from the Lancs border to the Aire following the River Calder. Day 1 featured a Lancashire/Yorkshire identity crisis, the Pennines’ hippie capital, and different approaches to dog muck. 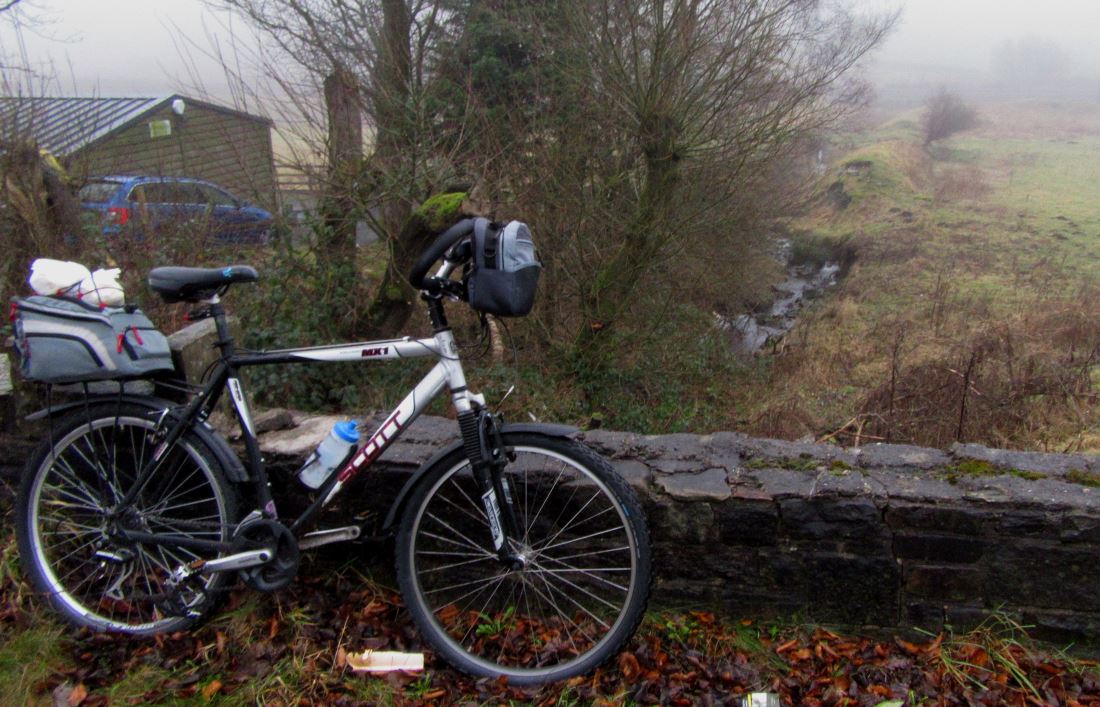 This is the source (pic) of the River Calder, at least as marked on 19th-century OS maps: Ratten Clough, which funnels all that Pennine drizzle ultimately to the North Sea. I did the trip on my Trekking Bike, a modified hardtail MTB (a Scott MX1 Voltage, which may come as a bit of a shock). Having done many stretches of the route before, I knew what sort of rocky, unreliable, treacherous surfaces I’d be facing – Sustrans National Cycle Routes, in other words.

Confusingly, there’s more than one River Calder. As well as Yorkshire’s – the longest – there’s one in Cumbria, two in Scotland, and two in Lancashire. One of the Lancashire River Calders has its source just a few hundred metres from the location above. That’s right: Yorkshire’s River Calder actually rises a kilometre or so inside Lancashire.

It’s a situation as murky as the weather I had for the start of the trip on this foggy, clammy winter morning: while riding up to the source, on the back road over the top of Todmorden Moor, I’d had zero visibility at times. 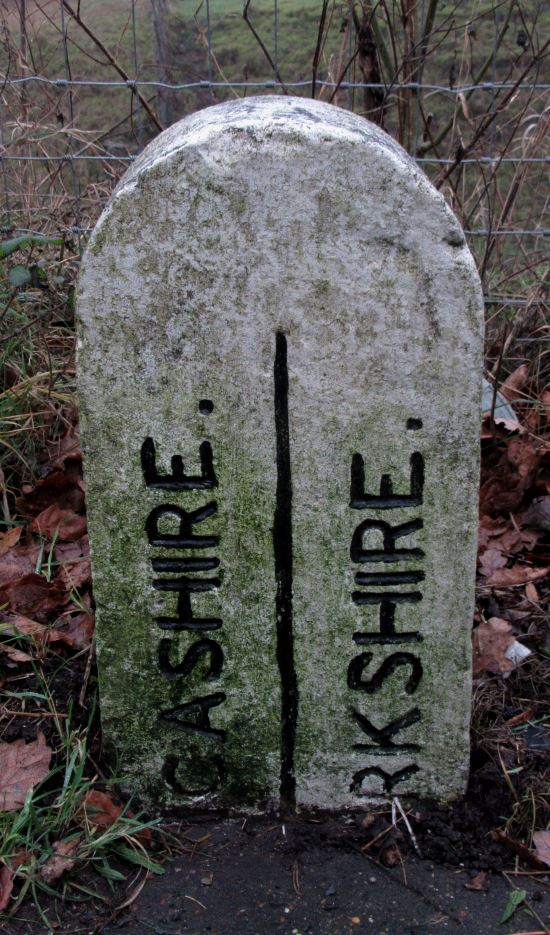 Indeed, I’d had to cross the historic border (pic) to get here. Lancashire had welcomed careful drivers; Yorkshire hadn’t, but the greeting slogan on the sign for Calderdale described it as ‘Ruggedly Sophisticated’.

As confirmation, the first pub over the line had a placard proudly announcing the availability of Yorkshire Tea. 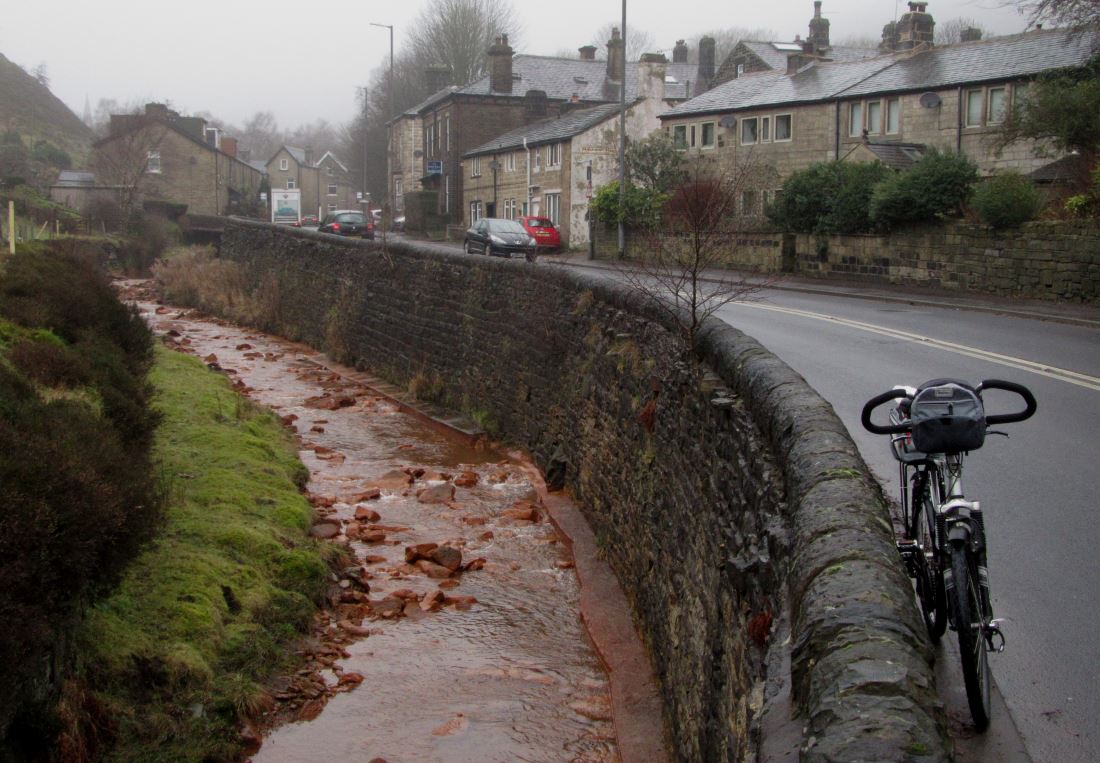 The rusty-looking Calder gets moving through the town of Cornholme (pic), as did I, freewheeling down the A646 towards Todmorden, and also feeling a bit rusty. This is a dramatic stretch of countryside, hemmed in by lumps of Pennine whose tops are shrouded in mist. 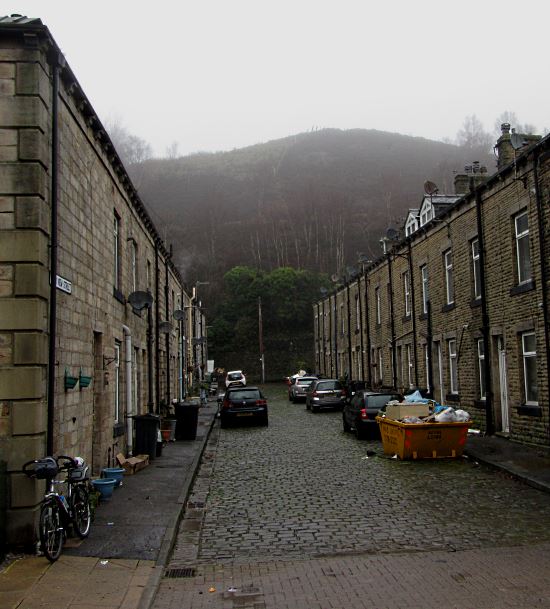 A feature of these towns is these short, cobbled side streets (pic), ending abruptly at the foot of a hill.

One of the Christmas street lights that were still adorning Cornholme’s main street featured Santa Claus riding a bike. Given the cobbles, it had better be a gravel/ adventure bike. 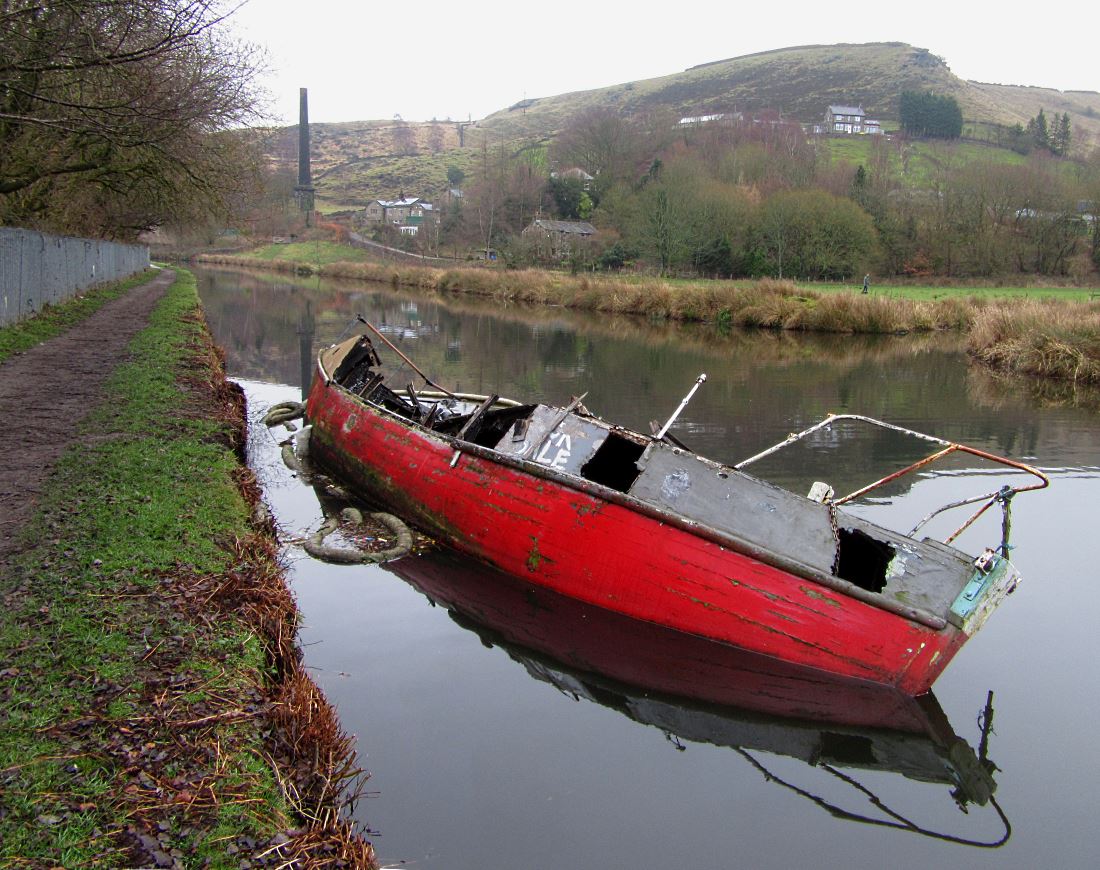 Thanks to the downhill I’d hardly pedalled when I got to Todmorden, historically a town of split red-rose/ white-rose personality: the Calder used to be the Lancs–Yorks border. Now the split is between the post-industrial decay (pic) and burgeoning hip’n’trendy: the mills and factories that used the Calder’s water power in centuries past have largely gone, but on previous trips I’ve enjoyed chic bistros and stylish cafes that floated my boat, anyway. There’s an active free-food movement that grows veg and herbs in help-yourself public beds, and there’s a Wetherspoon, where I warmed myself up with some coffee in help-yourself refills. 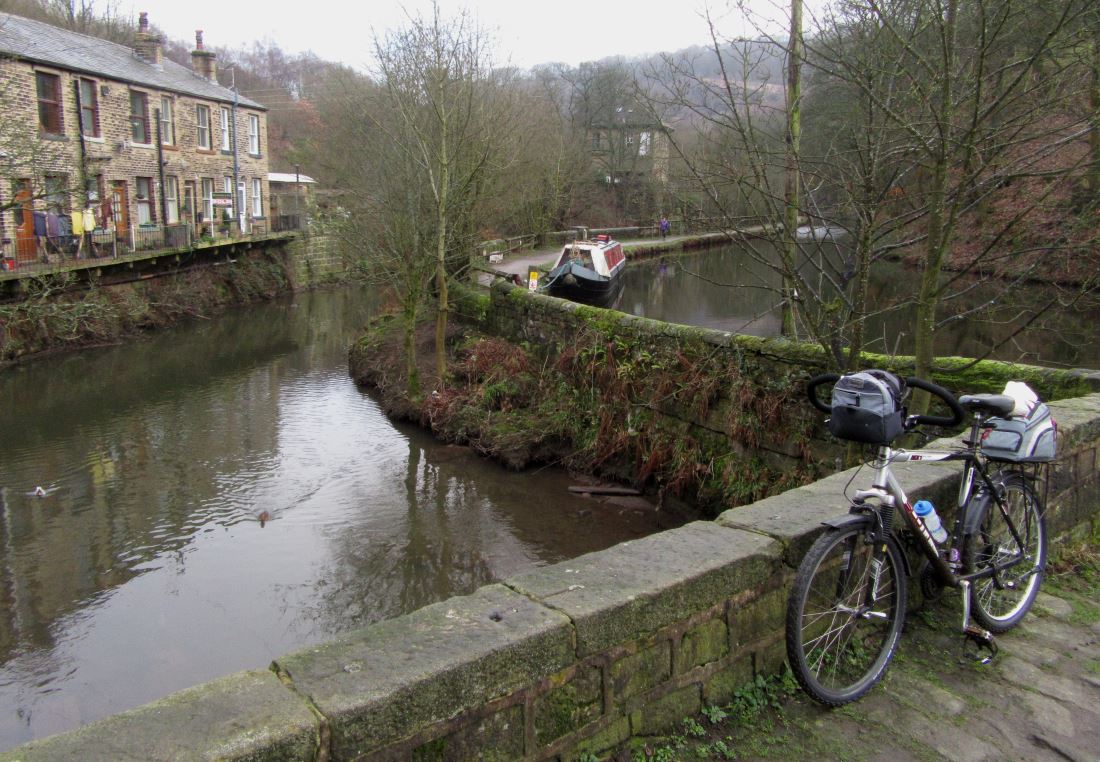 From Todmorden, the Calder is joined by a canal and railway, threading around allotments along the valley floor; the two watercourses run for long distances right next to each other (pic). Several people were out on the towpath on mountain bikes, sharpening their close-manoeuvre skills by dodging the copious dog turds (not pictured). Perhaps that’s what the sign meant by ‘rugged sophistication’.

At Luddington Foot things were a bit classier: rather than leave extruded canine faex on the towpath, dog-walkers bagged it and hung it on trees or stood it on walls. Sounds like a winner in the next Turner Prize.

Still full of the brown fluid Wetherspoons call coffee, I had no need to stop off at the canalside cycle-cafe in sophisticatedly rugged Hebden Bridge, which I’ve blogged about before. The train out this morning, from Leeds to Manchester Victoria, had been mysteriously empty until we’d got here. Then it had filled up, with all those young professionals who live here in converted mill apartments and work in Salford Quays making TV dramas set in Calderdale. Or perhaps they were just off in search of a bank: recent closures mean that, astonishingly, there are none along the Calder between Todmorden and Brighouse. 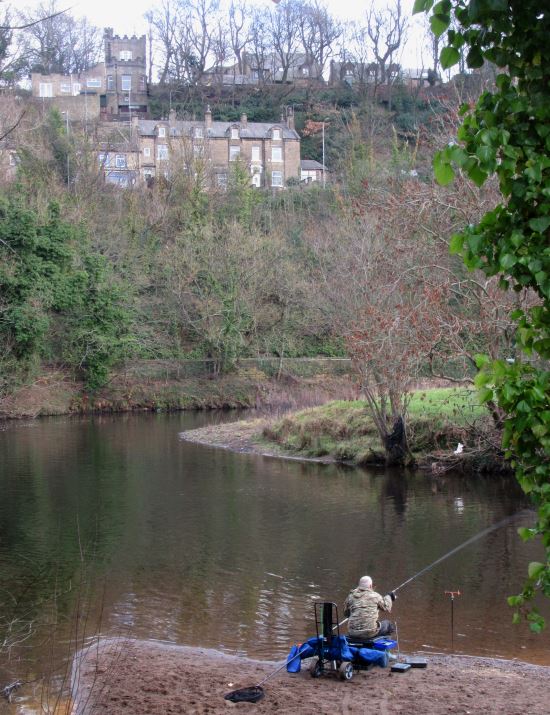 The Calder used to be a sewage outlet for the many industries that clustered up the slopes: open cast mines, chemical factories, dye works. (They say the river used to run different colours on different days, depending on factory timetables.)

Thanks to their decline, the river’s a lot cleaner than it used to be, and offers some good day fishing now (pic). Not night fishing, as the fish don’t glow in the dark an more. 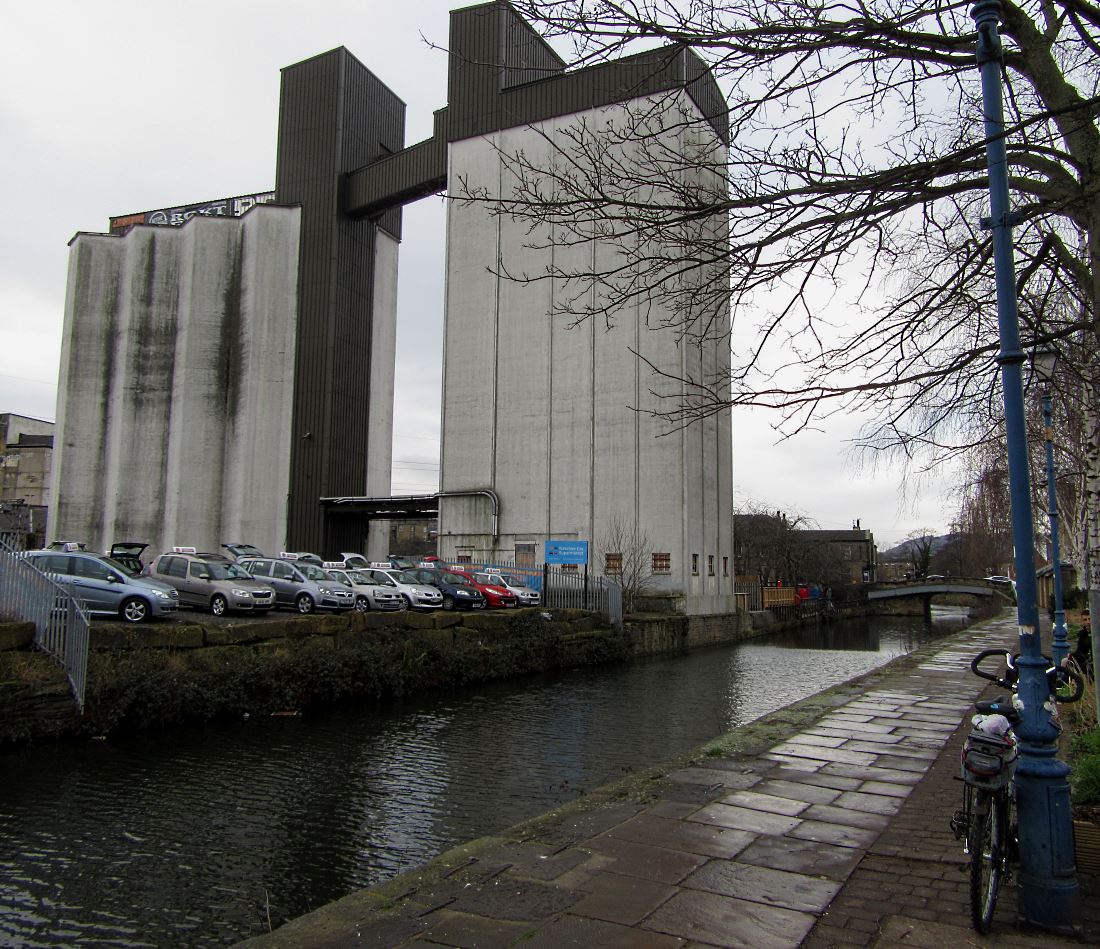 I cycled past Brighouse’s answer to the Taj Mahal (pic). The town’s most iconic building, a spectacularly ugly former flour mill, was driving everyone up the wall, so it has been imaginatively repurposed as a climbing centre that also does Escape Rooms, Pilates, and Nerf. And if you don’t know what that is, you’ll have to look it up yourself, because I’ve done plenty already, and a nerf is a nerf.

Two honorary members of the Calder Valley club are Halifax (actually on the Hebble) and Huddersfield (actually on the Colne). From Brighouse I took the train the Halifax that evening to meet up with fellow cycling author Andrew Sykes; I’ve blogged about that in a separate post.

Back in Brighouse later that night, I cycled along dreary roads to my bolthole for the evening in Dewsbury (missing none of the Calder: there’s no riverside routes in that stretch). There I had a pint in the quietest Wetherspoon I’ve ever seen – with three staff and three customers including me at one point, we each had our own personal bar attendant.

I fancied a spot of light reading with my beer but had no book with me, thanks to travelling saddlebag-light. Luckily, the bar staff were comprehensively tattooed.