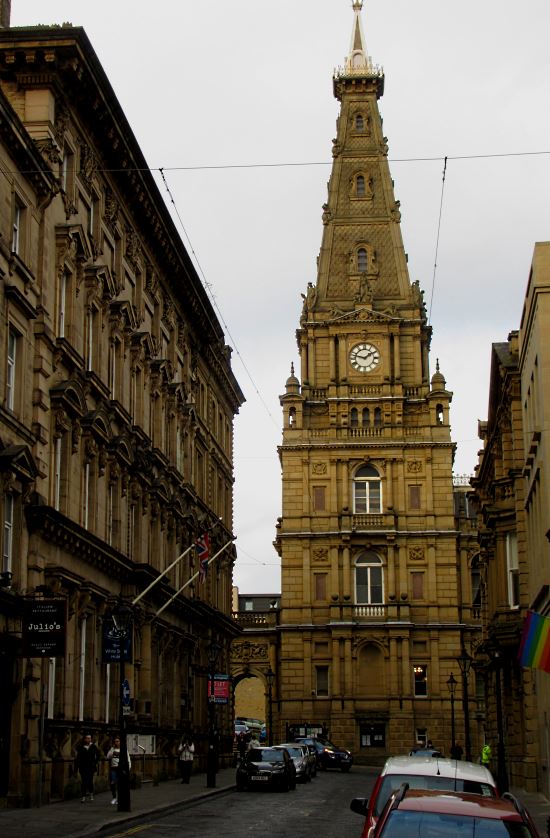 Halifax (pic), home to almost half Calderdale’s 190,000 folk, is not short of associations. Cat’s-eyes; Quality Street; the eponymous bank; the Eureka family attraction; victim of gratuitously infernal slander along with Hull.

For telly viewers it’s the setting of comedy-drama Last Tango in Halifax, while for cyclists it’s the venue of Shibden Wall, a famously tough climb up ferocious West Yorkshire cobbles. I thought about doing that ascent again when I visited this time. That is to say, I thought about doing it last time, too.
I’d come here in the middle of my River Calder ride. Halifax isn’t actually on the Calder – it’s on the Hebble – but then neither is there a Quality Street here: the confection, one of many products of the Mackintosh sweetie empire that grew here, was named after a play by JM Barrie. 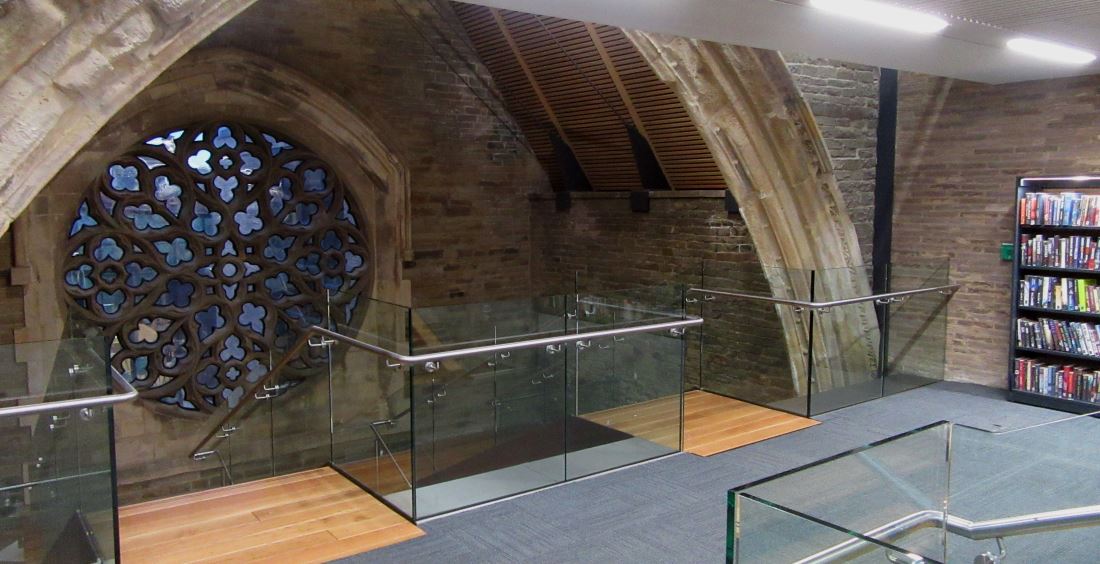 I had an appointment to meet up with Andrew Sykes, author of the ‘Reggie’ cycling travelogues – but first I had a wander round the centre. The library is in an old church, and the splendid rose window (pic) greets you up the stairs as you search in vain for a copy of Bluff Your Way in Cycling. The staff painted an enthusiastic portrait of their town: friendly, lively, rejuvenated. Maybe some of that might rub off on me. 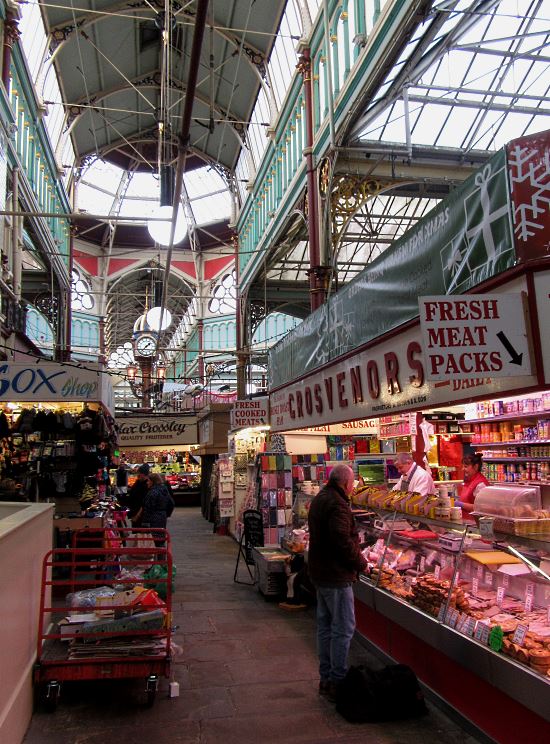 Halifax has a fine selection of Victorian buildings, many of which are being renovated: the market (pic) for instance is having its 1980s modifications stripped out and returned to its original features. Mid-20th century economic doldrums meant that Halifax was not ‘redeveloped’ as brutal concrete blocks, Andrew told me – a benefit, as I know from my time in Bath, which lost more Georgian terraces to the council than it did to the Luftwaffe. It’s meant that those old factory buildings and handsome streetscapes are still there, unrazed, and able to be rescued. The area between the library, station and (blackened and gloomy) Minster is next, apparently.

The most obvious example of Halifax’s citybreak-friendly reboot is the Piece Hall (pic), recently spruced up and now one of the most awesome large public squares in England. It’s a similar size and feel to Salamanca, Andrew and I agreed, though perhaps without the pavement cafes, tapas bars, bell tower, T-shirt weather, and availability of house wine for under a fiver. The Hall’s galleries are home to dozens of boutiques and shoppes. If you’re after artisan jewellery, bespoke gin or fine art this is the place, though on a chilly January weekday afternoon it was very quiet, each unit having a sole occupant at the till who looked up hopefully from their mobile phone as I walked past.

The busiest attraction in the Hall was an Autism Experience van, which offered to give you an insight into what it’s like to be on the spectrum by subjecting you to flashing lights, loud noises and sensory overstimulation. It surprised me how many people were queueing to undergo such an unpleasant experience, but then people queue to get into York’s lagery central pubs of a Saturday evening too. 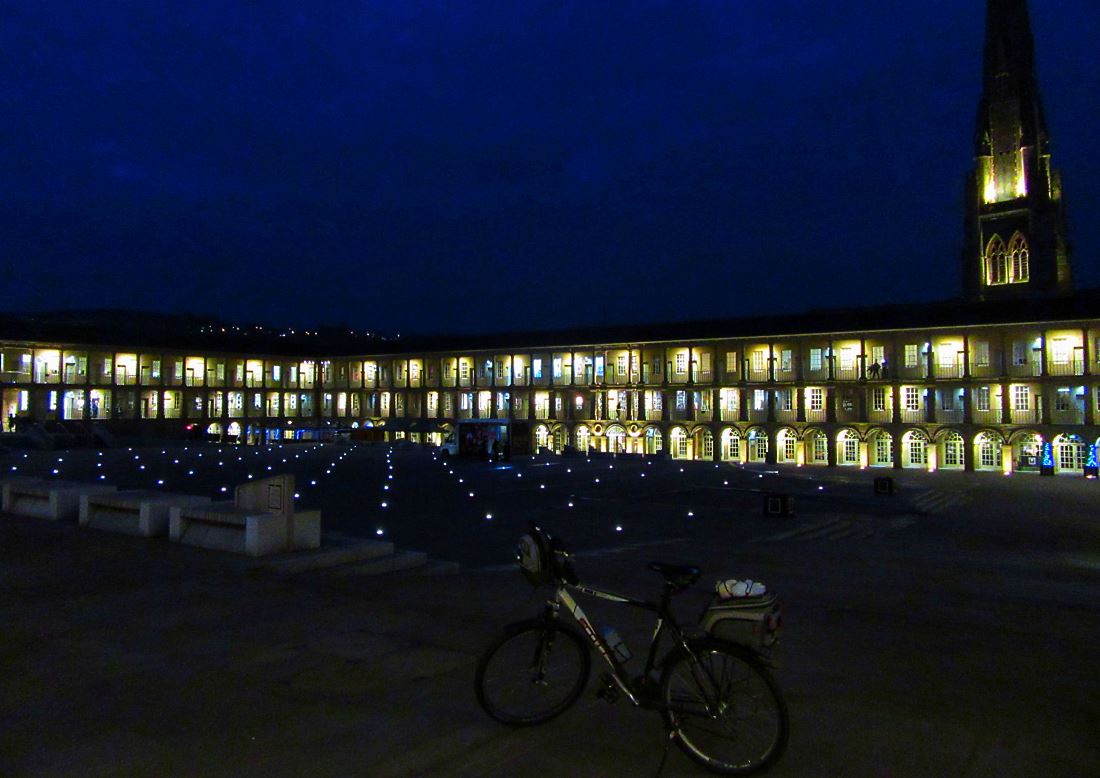 Piece Hall looked lovely in the evening, I must say (pic). Andrew and I adjourned for a coffee in the Square Chapel next door, and talked cycle-touring most enjoyably. There was a local company function there, with free drinks. Tempting as it was, I didn’t try to pose as an employee. The lycra tights, muddy shorts and tatty mitts might have given me away as an impostor.

Since the 1600s Halifax has been a place to pray for deliverance from, along with Hull (another place benefiting from regeneration) and Hell (which would not qualify for redevelopment funding, being outside the EU). Percy Shaw, the inventor of those cat’s-eyes, might have been the face of Halifax last century – he lived in a house with no carpets or furnishings, just crates of beer and crisps for his pals, and televisions permanently on and tuned to all channels then available. In the eyes of contemporary newspapers this made him an ‘eccentric’. In the eyes of my dad this made him a role model.

But Halifax is changing agreeably. It’s investing a lot of money, and however well it’s working out economically, it certainly makes the place delightful to visit. And yes, there are Wetherspoons here, one of which is called The Percy Shaw. My dad would have approved.