Day 3 of the seventh of my Yorkshire Compass Rides involved the westernmost limit of historic Yorkshire, Little Copenhagen, a surprising notice about cats, and the very centre point of Great Britain.

Reeking of kerosene, and fearful of any encounters with cigarette smokers, I set off the few miles from Slaidburn youth hostel to Dunsop Bridge (pic). The hilltops here, looking west, are the westernmost in historic Yorkshire. 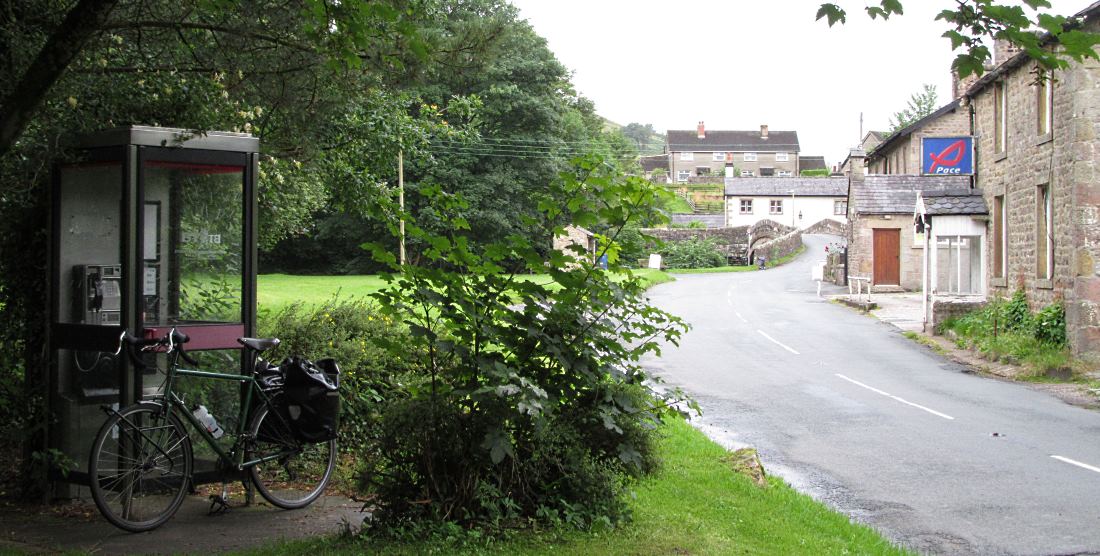 Dunsop Bridge – another village that used to be in Yorks and is now Lancs – is the settlement nearest the point determined by the Ordnance Survery as the centre of Great Britain. The nearest you get to a monument or marker is this phone box (pic), which is inscribed as Britain’s most central phone box (which it is) and 100,000th in the UK (which is probably isn’t, now that most of the rural ones have been turned into libraries or greenhouses).

The actual central point is four miles north of Dunsop Bridge, along the Dunsop Valley (pic). There’s a flat tarmac bridleway, not open to non-residential traffic, that makes a real gem of a family-friendly trail through some good scenery. You could be in Wales or Scotland, especially when you try to get a mobile signal. 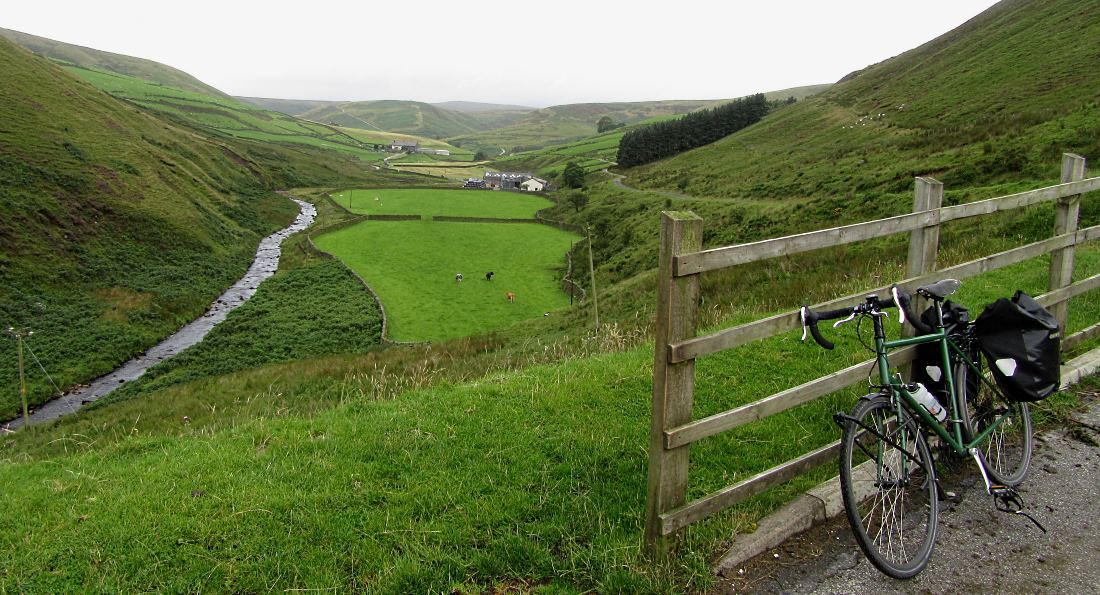 The nearest you can get by bike to the centre is Brennand Farm (pic), just visible at the top of the picture here. To get to the actual origin, Whitendale Hanging Stones – the location at which Great Britain could be balanced on the point of a pencil, if you had one that hadn’t been chewed by a nephew – you have to walk a mile or so along a footpath behind the farm, and it was starting to rain, so I didn’t. Instead I went back to Dunsop Bridge to the Puddleduck Cafe, Britain’s most central, which conveniently had good bike parking, free use of a track pump, and most important coffee and cake.

I still had the find the westernmost cyclable point, and headed out from Dunsop Bridge. Evidently it’s a perilous place for inattentive cats (pic). Perhaps they’re too busy chasing red squirrels. 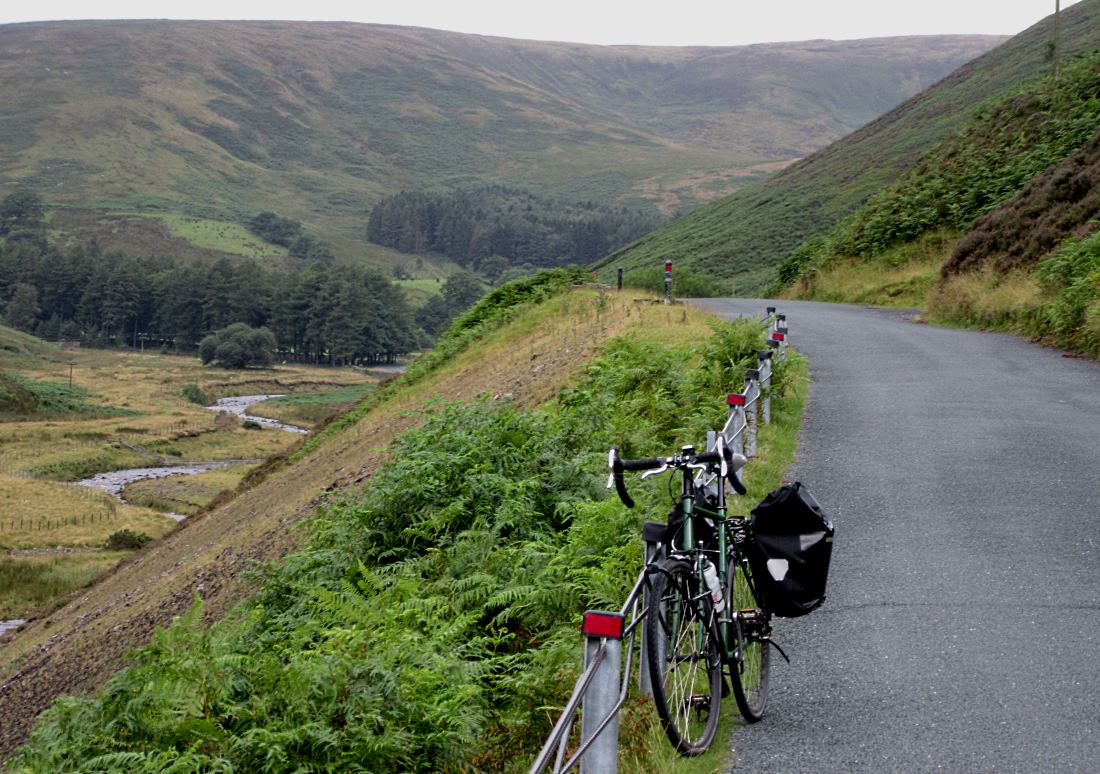 It’s fine scenery round here, as the road heads through the Trough of Bowland (pic), still in modern Lancashire but historic Yorkshire. Many of the rivers round here have provided drinking water for Preston since the late 1800s. Given how much it has rained in the last two days, I don’t think they’ll be going thirsty. 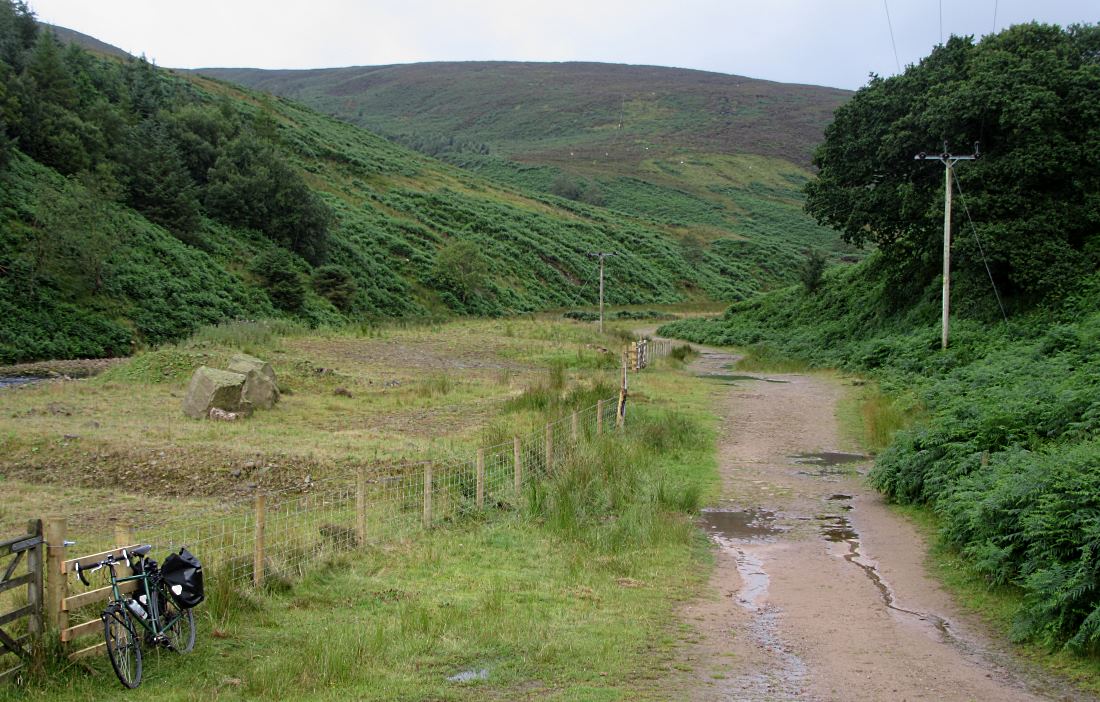 A track leads west from off this road to the very westernmost point in historic Yorkshire, a watershed up in the hills by Hawthornthwaite Fell. On the map it’s amazingly far left, only eight miles from the Irish Sea. You can cycle some of it, on tarmac up to the water works, but beyond (pic) is a bumpy walkers-only track that goes to Longden Castle – despite the name, a shabby little hut for grouse shooters. It’s possible to cycle on tarmac in historic Yorkshire and be further west (up by Sedbergh, at Beck Foot near Lowgill). But as part of my Compass Rides, my line westwards out of York finished here. 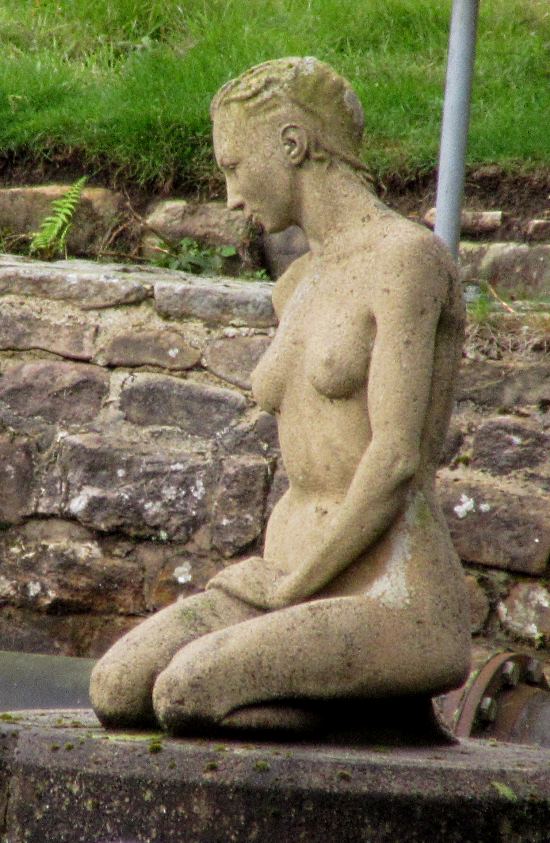 I paused briefly to admire Miranda, a statue of the guardian nymph of the waters here (pic) which is the reason why this part of Yorkshire isn’t called ‘Little Copenhagen’.

Then it was down to Clitheroe for the train home, and the completion of another delightful Compass Ride. I had soaked up lots of atmosphere, though perhaps a bit too literally.
Miles today: 25
Miles York to Dunsop Bridge: 89