A very short riding day, as planned – in fact I spent more time having breakfast than I did cycling. My fabulous little casa did me proud, serving up lots of fresh local mango juice (the surplus of which I diverted into my water bottles), omelette, bread, local honey and local coffee. Then, a local swim: my room was right on the lake shore (pic), and I hadn’t lugged my trunks three-quarters of the way across Cuba as ballast. 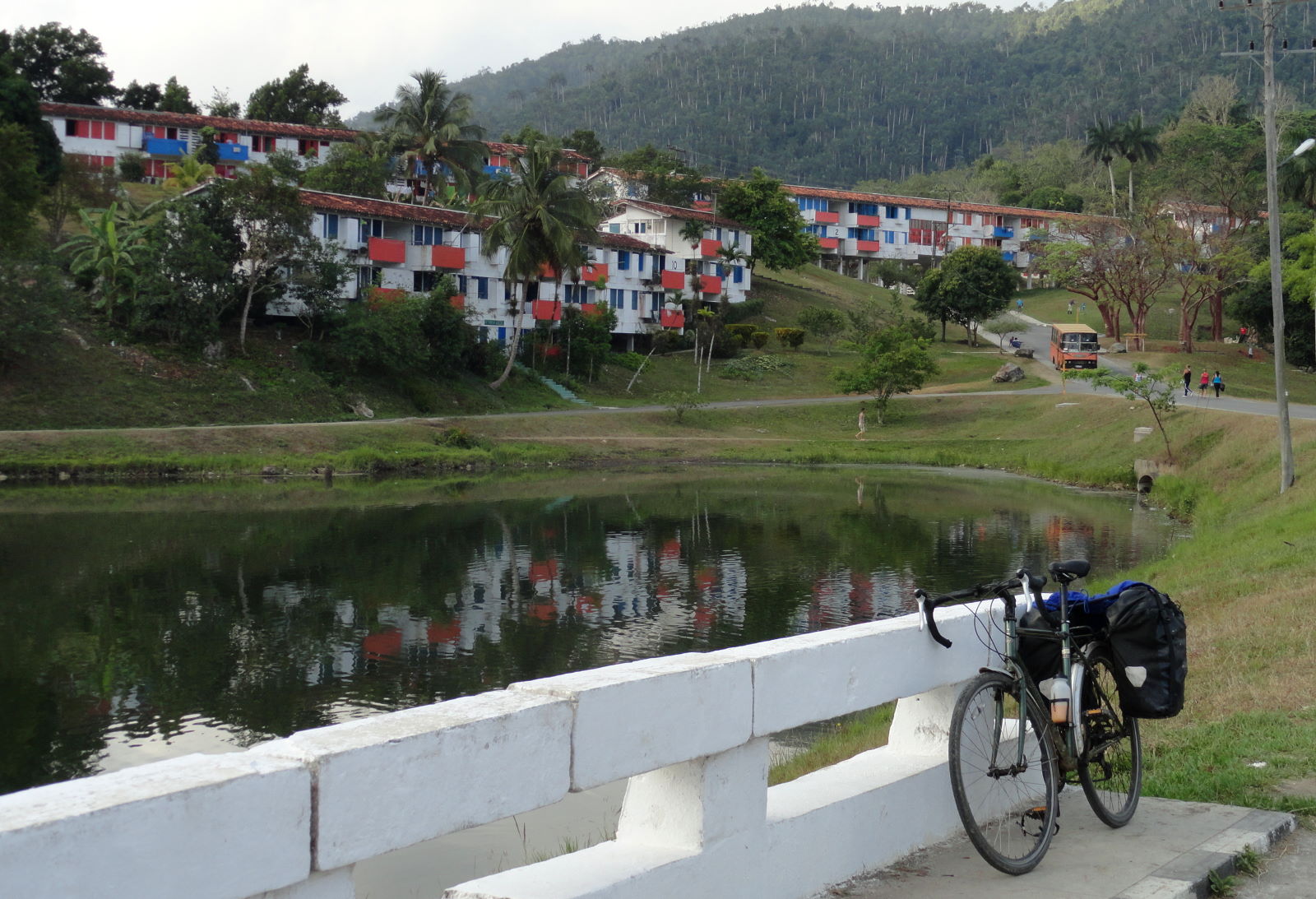 I headed out of Las Terrazas back across the lake (pic) and thinking of how much it resembled Stevenage, which wasn’t perhaps as much as I suggested yesterday. 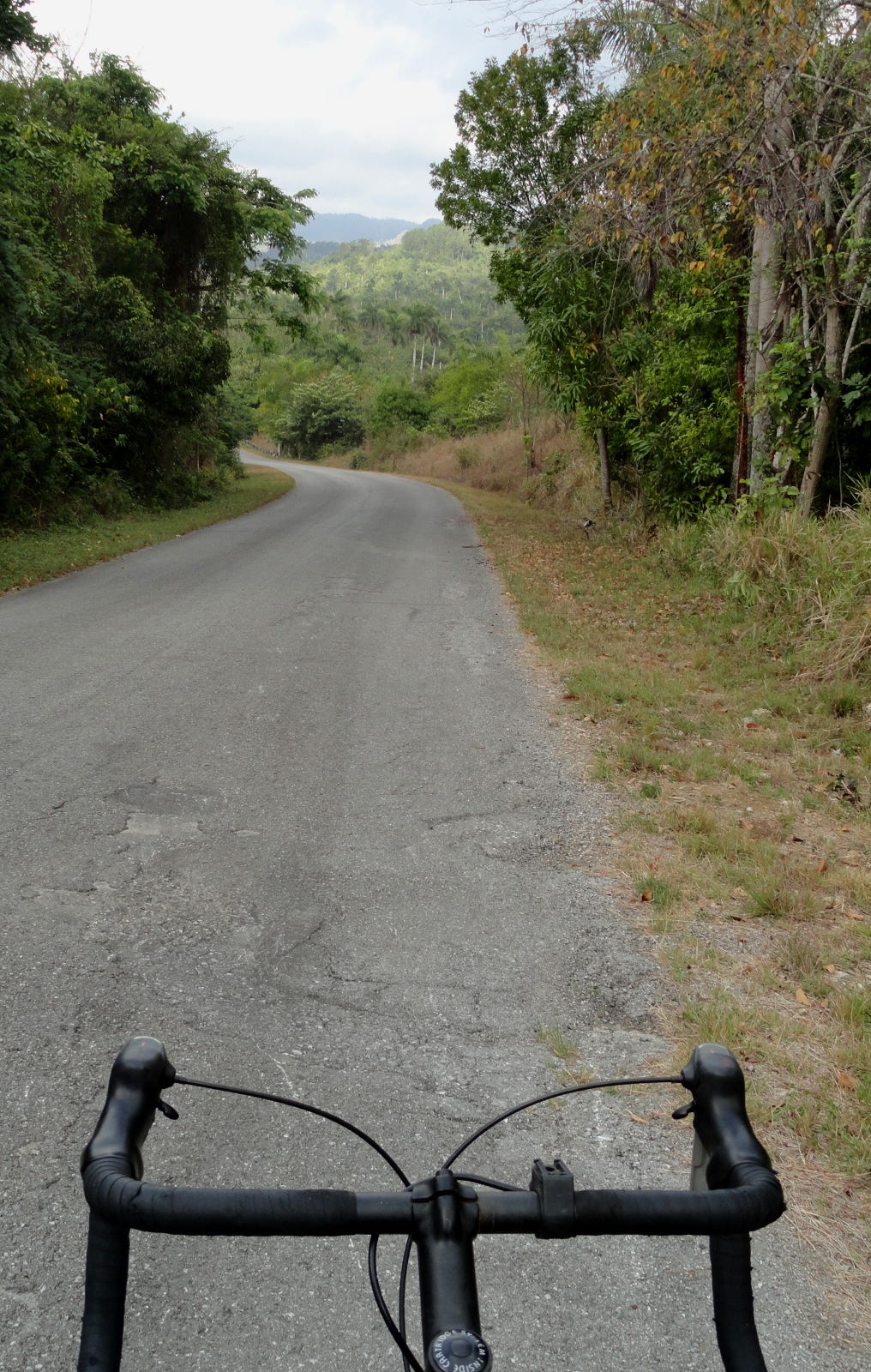 There was zero traffic on the twelve-mile country-lane trip through lush scenery and rolling hills to my target town, the nature haven of Soroa.

I was taking my time, stopping to admire the scenery, and trying to match up the map’s inventiveness with reality: the ‘village’ of ‘Mango Bonito’, for instance, consisted solely of a derelict bus shelter.

I had a stiff pass to overcome, some of it on dirt road, but then a beautiful downhill freewheel (pic) into the headwind to arrive in Soroa by tenish. 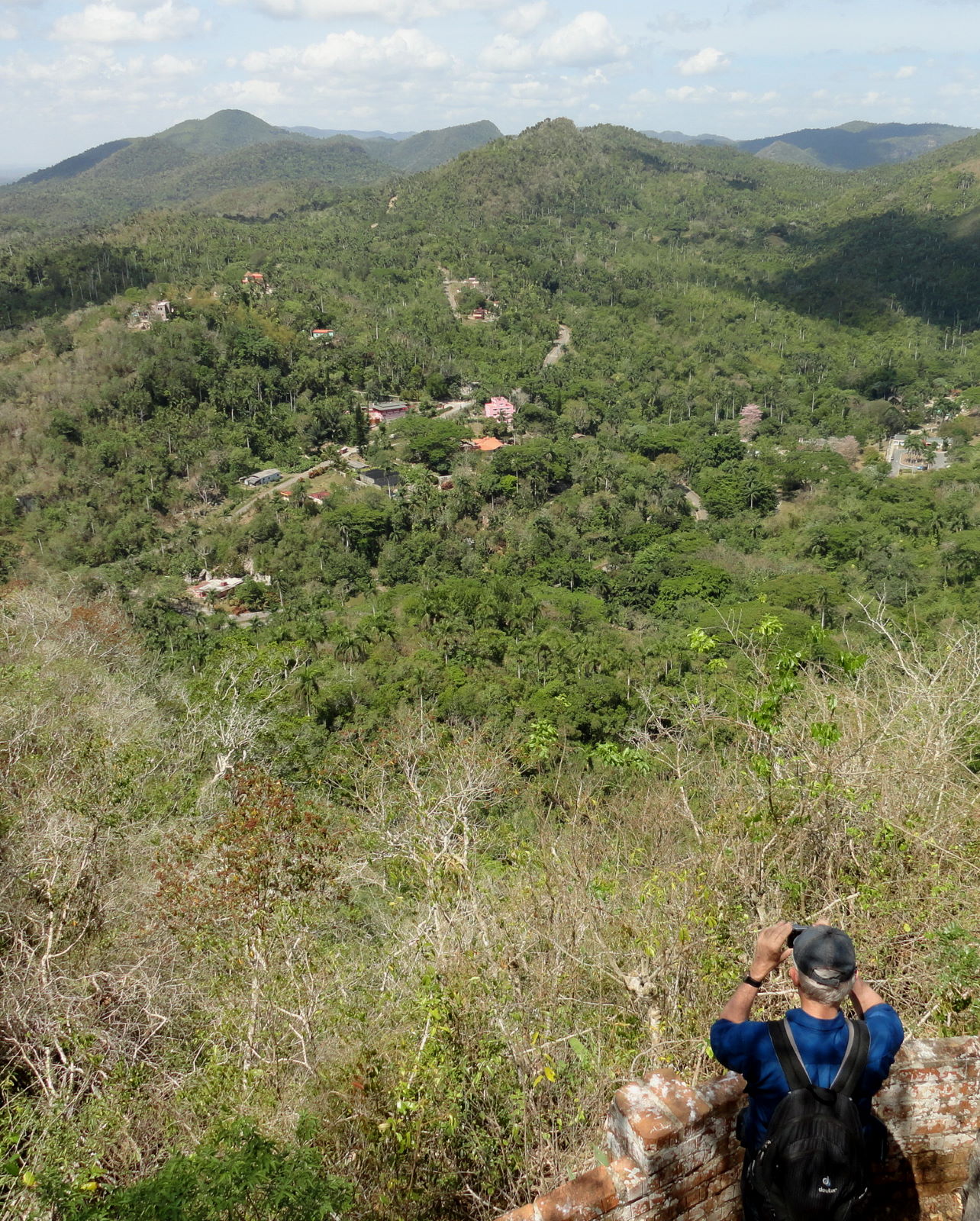 Another guidebook-recommended casa proved a cracker, comfy and stylish and right in the centre. I walked up to El Mirador (pic) for the sweeping panorama of the surrounding mountains and the plains to the south and west (where I’m headed tomorrow).

Soroa is known for its birdwatching opportunities, and I invested $15 in a personal tour of the forests by local expert Yoanni.

I doubt I could identify any of them now, though, so if I’m called as a witness for some avian court case, I’m in trouble.

Yoanni’s expertise was impressive. But just as he was patiently explaining to me that the little blue heron was the little, blue, heron-shaped thing over there, and not the cat I was training my binoculars on, his mobile went off and brought worrying news: his distraught wife told him that their daughter had just downed a bottle of perfume under the impression it was fruit juice.

He apologised profusely for breaking off the tour, but quite understandably had more important things to do than instruct a gormless cyclist in how to distinguish a Great Antillean grackle from a plastic bag, and he scurried off for a bus home refusing any payment for the half-tour he’d given. 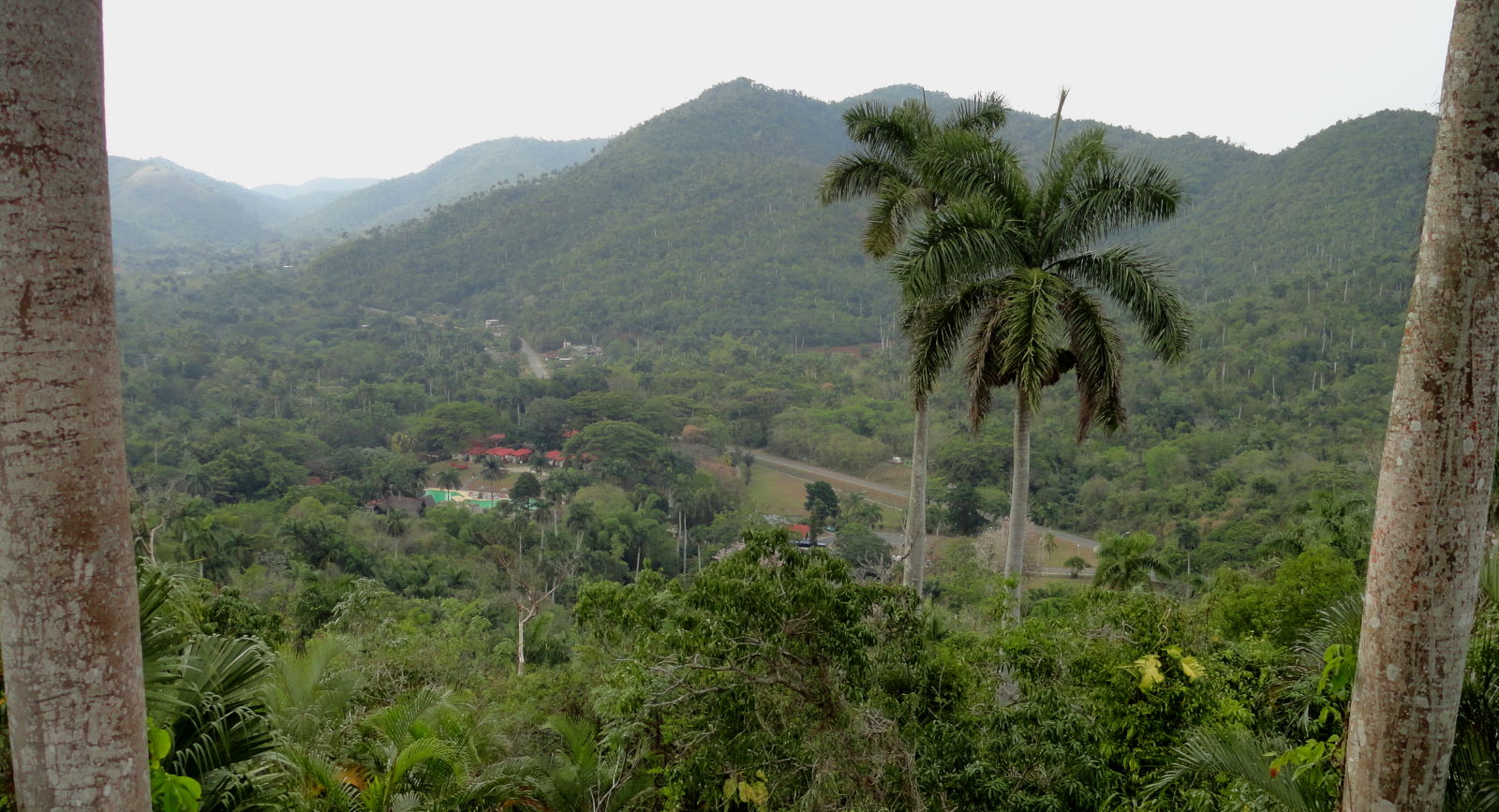 For my pre-dinner stroll I walked up to the Castello de las Nubes to enjoy the view back down over Soroa (pic). Back at the casa I enjoyed a whopping spread for $8: home made chicken soup, two lobster tails with veg, salad and trimmings, fresh fruit for pudding.

It had taken plenty of prep: the hostess started in the kitchen at lunchtime, and had coped with a two-hour power cut at the end, using emergency lights. 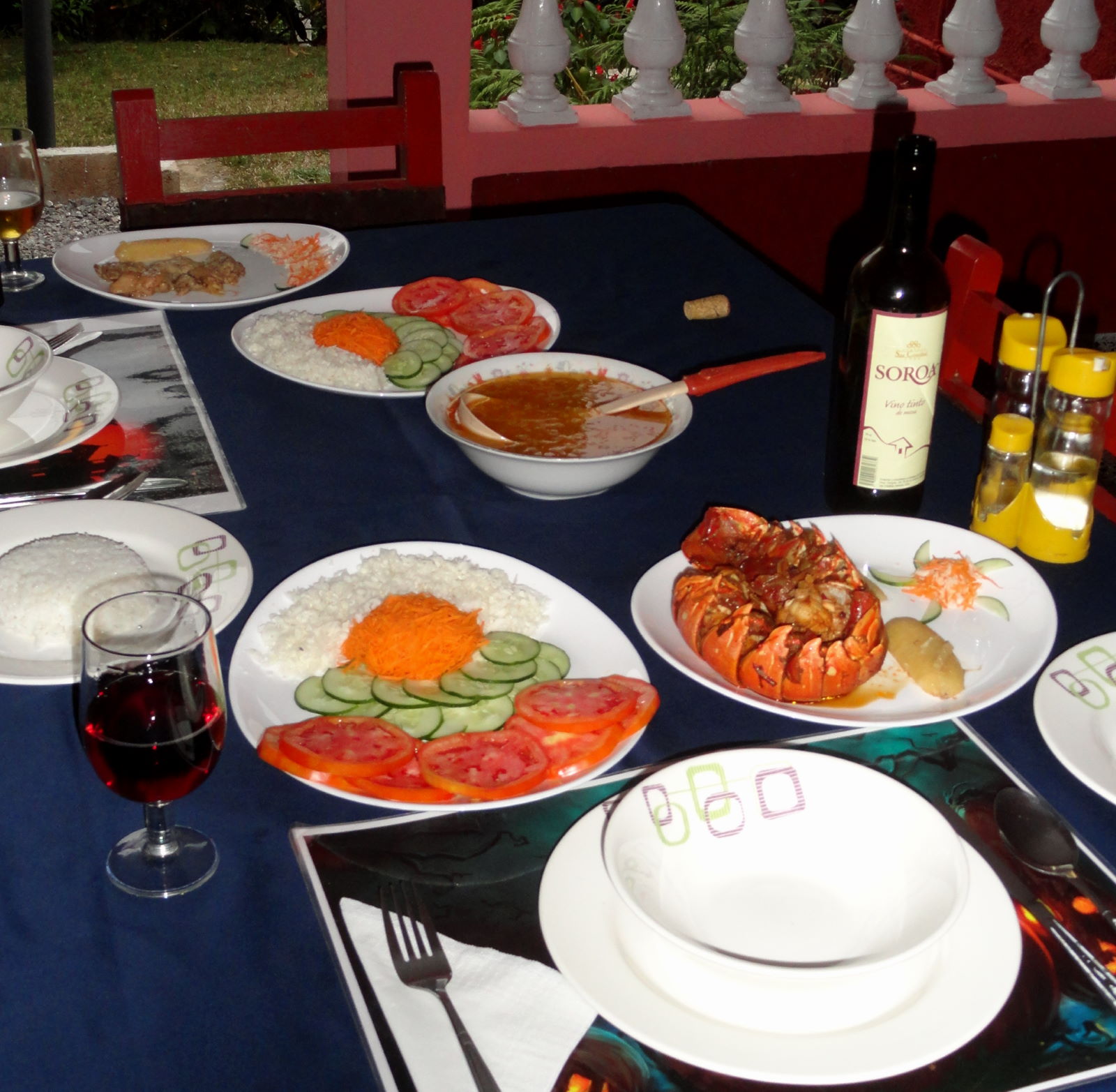 Without a trace of guilt – knowing that anything I bought from her was money going direct into the local economy – I also indulged in a bottle of local wine: Soroa red (pic), made at San Cristobal just a few kilometres away.

And it provided some welcome relief from my fellow guest tonight, a German who had come here for two reasons. First, for birdwatching; second, to rant to English cyclists about how much better South Africa had been under apartheid, quelling any demur by shouting ‘Listen! I have been there! You have not! I know this!’.

I agreed with him on one thing: that one has to have been to a place to be able to comment on it. So I suggested that he visit the real world sometime.

Or at least I would have done, if the fourth glass of Soroa hadn’t made my brilliant rejoinder totally unintelligible. Which was probably just as well.

Then Yoanni called the casa to let me know his daughter was fine, following swift drainage work at the local hospital – which was thoughtful of him; I had genuinely been worried, and he was a decent guy who cared for his family – and that she had decided to stick to real fruit juice in future.

Bird images swirled round my mind as I went up to bed very happy. Emerald hummingbirds; warbling vireos; common ground doves, crapping on the safari suit of a pompous German holidaymaker.

I slept the sleep of the righteous, after perhaps the most enjoyable two days of the trip so far.