After a 15-hour bus journey from Havana, during which the driver had entertainingly run the air conditioner settings through every climate type from tropics to permafrost, I enjoyed a couple of days in the laid-back port of Baracoa. It was a lovely sunny day when I arrived (pic), with locals and tourists out strolling the centre… 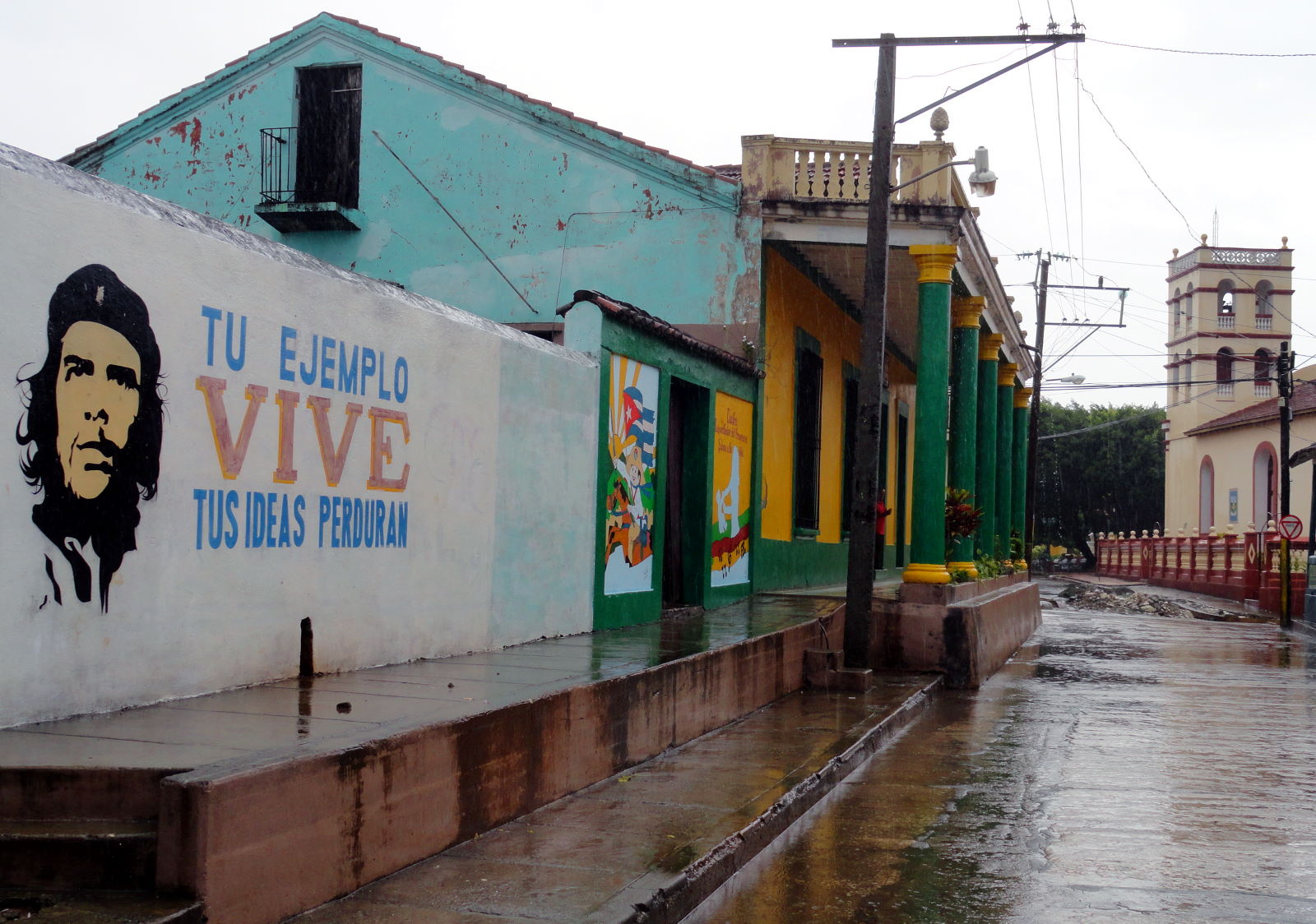 …but tropical rains came to empty the streets (pic)… 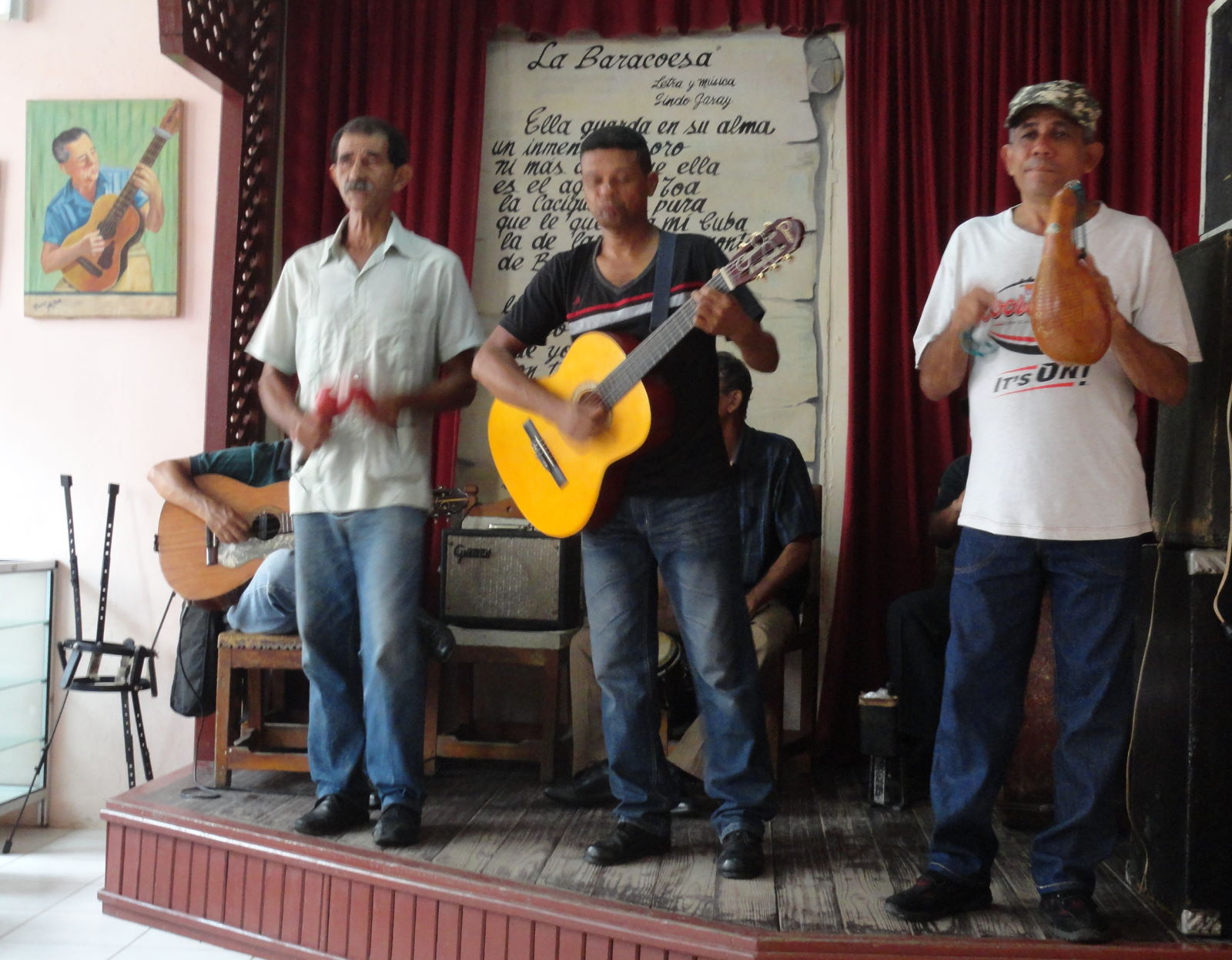 …and confined me to my guesthouse, the town’s internet cafe, and nearby music salons (pic). The local-tourist balance felt much more agreeable here than back in Havana, by which I mean cheap beer.

But today was the start of my trip proper. I slipped through town at dawn – mostly one-handed, thanks to a bump the size of a egg on my right elbow, the legacy of a tumble in York the day before I left. It was all very atmospheric: horse-drawn carts taking kids to school, cyclists riding cheap Chinese clunkers, the odd smoke-factory car, lots of walkers… a gentle human tide on this cool damp morning. Leaving town I saw three pigs on the road, one tugging some roadkill off the tarmac. 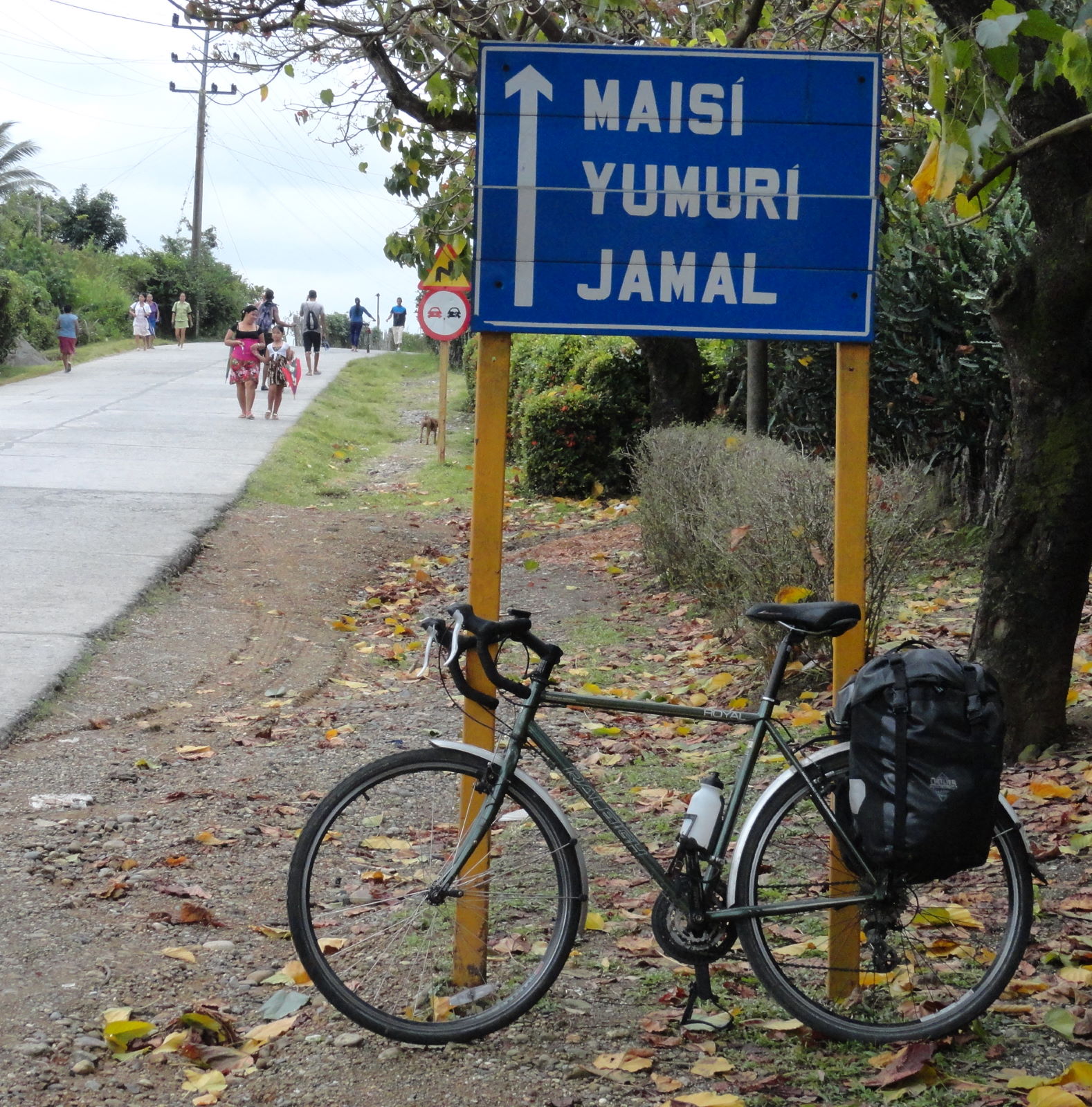 I’d been quite keen to start my End to End at the easternmost point, the tiny Punta del Maisi, 60km away. But the weather, wind, and cost of a taxi to get me there, seemed a high investment of resources for a photo of a lighthouse.

This junction (pic) was as near as I got to the extremity proper, though I did feel a bit guilty that a lot of people were evidently walking there. 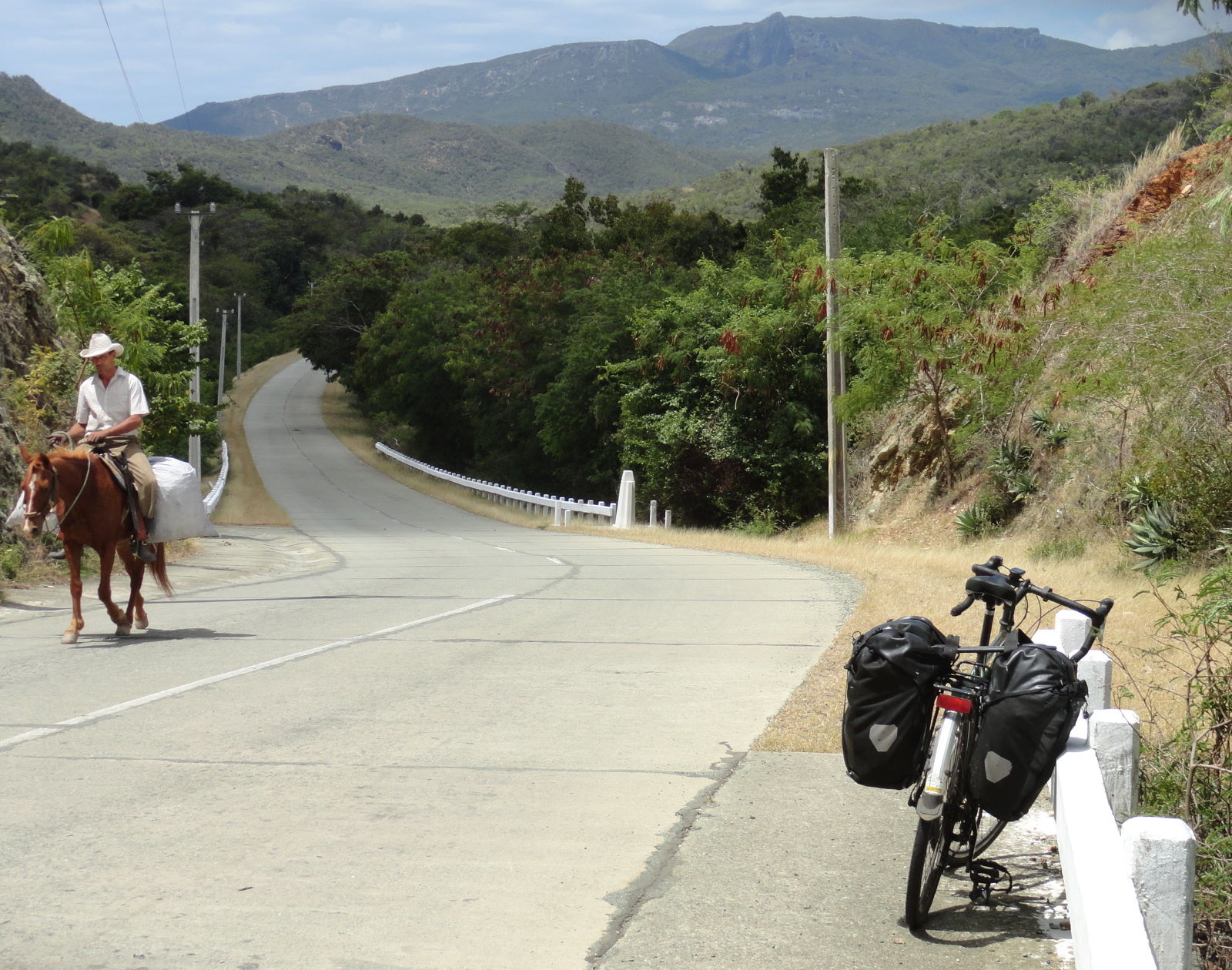 I climbed La Farola, a dramatic road-on-stilts that vaults the mountains between north and south coasts. It was a long long ascent, all gentle and enjoyable (pic). Four hours flew by, and I loved it all. 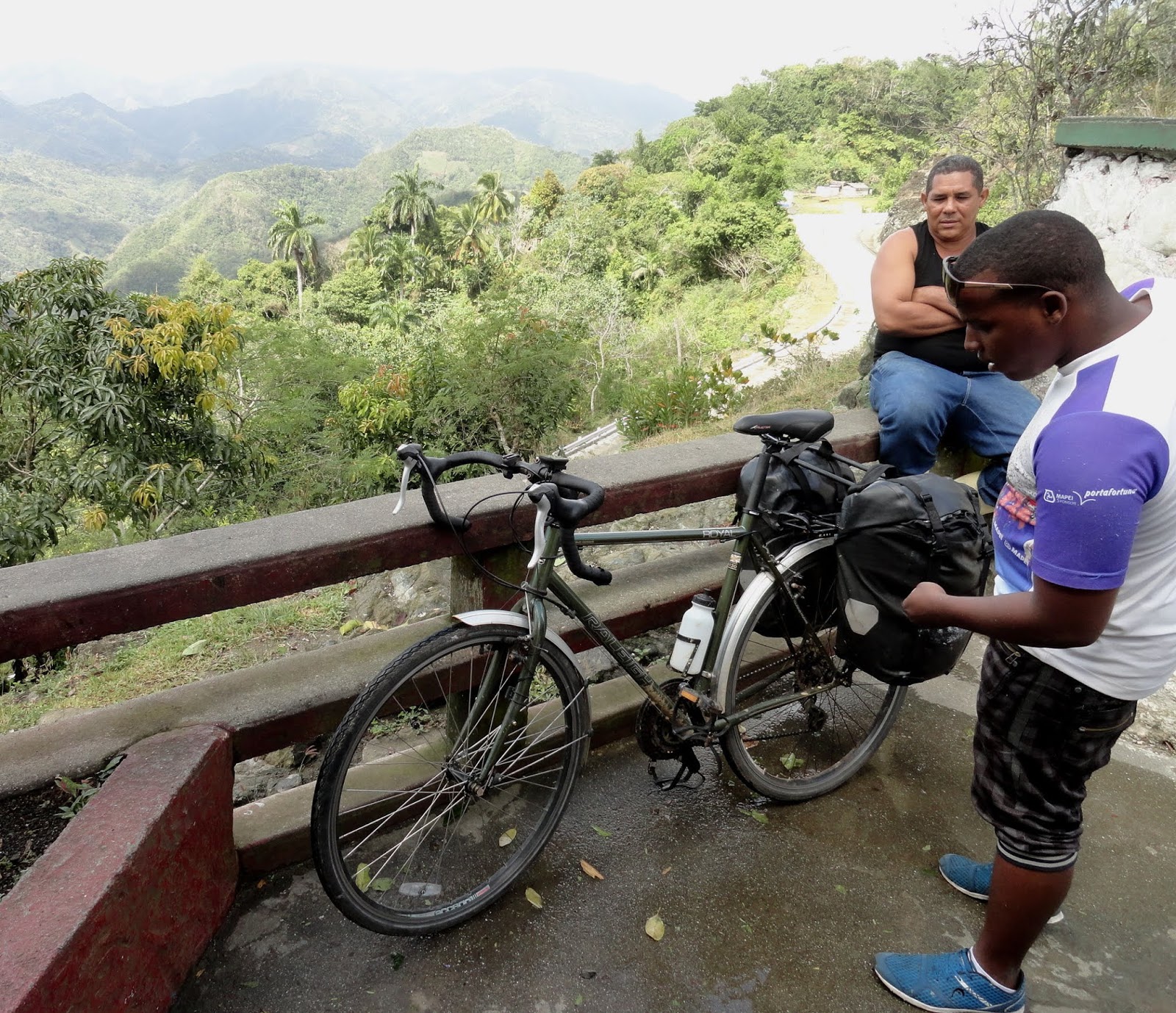 The scenery was grand, Cuba-green forest all round, the road worming and snaking and serpenting its way up into the hillsides. I stopped briefly at a kiosk at a summit and got chatted to by three guys interested in my bike (pic) and wondering why I wasn’t chasing women if my wife wasn’t here.

The long descent after the summit was almost all delightful, with no traffic, decent sight lines and safe barriers, though I stopped a couple of times to let my rims cool. I finally got to the south coast and the flat seaside road, the ocean looking improbably blue and lovely. A fine tailwind blew me easily the 15km or so into Imías (pic), a little town which – I knew from internet research yesterday – had unofficial hosting possibilities. (Officially, you’re not allowed to stay there as a foreigner.)

I asked at a kiosk in town where I had a two-peso batido (smoothie) and – via a few other intermediaries – soon found J—, a bike enthusiast and tour guide who puts up cyclists in his house, attic flat, dinner, breakfast and all, all totally free. Though I did, of course, give him a peso or two in return for some bike repairs he kindly did for me. Obviously I wouldn’t pay him for accomm. That would be illegal.

Imías is a one-street town with a dribble of shops and kiosks that don’t have much even when they do. I spent less than 20 pesos (under $1 US) in all, squeezing out just about every snacking possiblity, none more than two pesos – an ice cream; a pan con tomate; two guarapis, whatever they were; two batidos frios; two refrescos; two small croquetas de cerdo, clearly the Spanish for tasteless ‘grey sludge’.

There were no beers available, which was just as well. And I couldn’t fancy rum just yet. Back at J—’s I was humbled to be served with a dinner: the Cuban staple of rice’n’beans, plus real-tasting chicken legs, tomato salad, and plenty of much-needed water. I was tired, my elbow was throbbing, and I needed bed. I was asleep by eight.