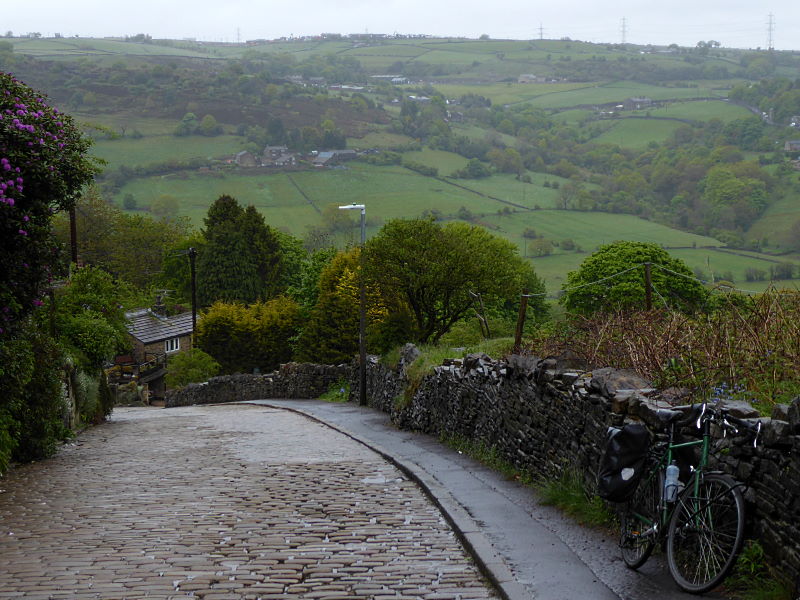 My rather confusing morning tick-list consisted of Shibden Hall, Shibden Wall, and Shibden Great Wall, but not Shibden Great Hall.

Shibden Hall is a fine centuries-old manor house on the outskirts of Halifax. Getting there was an irritating push round a spaghetti-junction-like tangle of bike- and ped-hostile arterial road footways.

The Hall is famous as the home of 19th-century gender pioneer Anne Lister. A hard-nosed businesswoman and industrious lesbian (whose diaries record her conquests in code, detail and enthusiasm), she was self-confident enough to arrange a wedding with her lover Ann Walker at Holy Trinity Church, York, in 1834. The remarkable Mrs L – clearly a woman centuries ahead of her time – is celebrated by a plaque at that church, and at the Hall.

Shibden Great Wall is an installation the Hall grounds which highlights techniques and regional styles of drystone walling. (It called to mind the Pam Ayres lines: I am a drystone waller./ All day I drystone wall./ Of all appalling callings,/ Drystone walling’s/ Worst of all.) It’s a terrific (and free) thing to wander round, and I was very taken with the access holes set in the walls for animals of selected sizes to be able to cross. Larger ones (eg for sheep) are called lunkies, while smaller ones (eg for mice or model zebras) are called smoots.

Shibden Wall is one of Britain’s most notorious bike climbs (No 40 in Simon Warren’s Top 100). Getting there from the Hall was an atmospheric little ride – through the grounds on a track, along a secret cobbled lane, up a ridgetop road, then plunging down to the valley bottom for the start of the Wall (‘Lee Lane’ as it’s called on maps, or ‘expletive deleted’ as it’s called by some cyclists).

It’s a bit of a monster: a kilometre of 15%, all but the beginning on bumpy biscuit-coloured brick cobbles. The most dramatic bit is the zigzag in the middle, which must be 25%-35%. With a laden touring bike, in drizzle, and with only a banana inside me for breakfast, I was inevitably going to push the whole thing.

Zebras can run at up to 40mph / 60km/h and escape predators by zigging and zagging. Their stripes are sometimes said to throw off chasing animals, but the best current theories suggest they actually protect against biting flies, who get confused when trying to land.

Up on the top I took a series of ridgetop roads with commanding views of the industrial scenery all round. I passed through Queensbury. It was, the sign informed me, the home of the legendary Black Dyke (Mills) brass band, one of my dad’s favourites, and part of the soundtrack of my Yorkshire youth.

I know Queensbury mainly as the location of an old railway tunnel that Highways England (boo! hiss!) wants to fill in, saying it’s uneconomic (Oh no it isn’t!) in contrast to local cycling groups who say it’s actually cheaper to preserve it and use it as a part of a Halifax to Keighley railtrail (Oh yes it is!).

I rode through the small hamlet of Egypt, which sadly didn’t have a sign, so I couldn’t pose in front of it for Twitter with a jokey caption along the lines of ‘Haha not the REAL Egypt obvs becuz rain drizzle & freezing cold, or as we call it in Yorkshire, May lol!!?!?!!’.

More grand civil engineering came in the form of Cullingworth Viaduct, which has been restored as a railtrail, part of that potential Halifax to Keighley route. I rode over it and back but carried on north of it, along a lovely ridgetop back lane round and down to Harden, and then down a fast downhill B road to Bingley.

And yet more grand civil engineering. The stretch of the Leeds–Liverpool canal at Bingley has one of the most famous bits on the waterways: Five Rise Locks, whose staircase steepness makes the path alongside an extraordinary 20% gradient. There can be few canal towpaths in the world that can double as a ski-slope.

I followed the towpath west for a mile or two and then peeled off towards a Yorkshire icon: Ilkley Moor, celebrated in our unofficial ‘national anthem’ On Ilkley Moor baht ’at. I’d been here before, in 2018. Then, as now, I was intrigued to learn that the tune was originally a hymn setting for While shepherds watched – I can’t think of those words now in the same way as I used to.

The jokey song is a cautionary tale about roaming the moor without appropriate clothing. I had a woolly hat, several warm layers and a waterproof breathable jacket, but in today’s bitter winds and heavy rain I only just avoided catchin’ me death o’ cold.

The word ‘zebra’ comes from Latin equiferus, which became (it’s conjectured) *eciferus, which went into Old Portuguese as ezebrario, then modern Portuguese zebra, and thence into English via Italian.

Ilkley Moor is not crossable in a car: the lane from the south runs out at the top, but the mildly bumpy track it continues as can be cycled. I clunked my way down to where it becomes tarmac on the other side, with Ilkley and Wharfedale splendidly laid out below.

At least, it would have been if it hadn’t been thick cloud and squally showers.

Nevertheless, I pushed on east to see the Cow and Calf rocks and Tarn, one of Ilkley’s postcard sights. There were few visitors in this weather, so I had the magnificent rocky auditorium to myself.

I warmed up with a coffee at The Commute, the town’s natty cycle-cafe. Ilkley is a well-to-do place, boasting a Booth’s, and you can see why it’s such a byword for classy-West-Yorkshire, and the sort of people who run successful businesses in Leeds and ride a five-grand road bike at weekends. Or even cycle bloggers who ride an eighty-quid old MTB.

I’ve ridden Wharfedale several times, so knew what it looked like, which was just as well as the weather was now horrible. My gaze was taken up with watching for 4x4s potentially soaking me even more by speeding past through the vast puddles. I passed Bolton Abbey, stopped briefly at Burnsall’s green to snack on crisps and a banana, and negotiated a monster puddle outside Threshfield big enough to have ducks swimming on it.

I stayed at a B&B by the bridge in Grassington, swopped a few tales with a lively fellow cycle-tourer who was a fellow guest, had a shower, beer and pie, and snuggled up gratefully in my little room that overlooked the rapidly-flowing Wharfe close outside.

I just hoped that, despite the rain, it wouldn’t get too much closer.