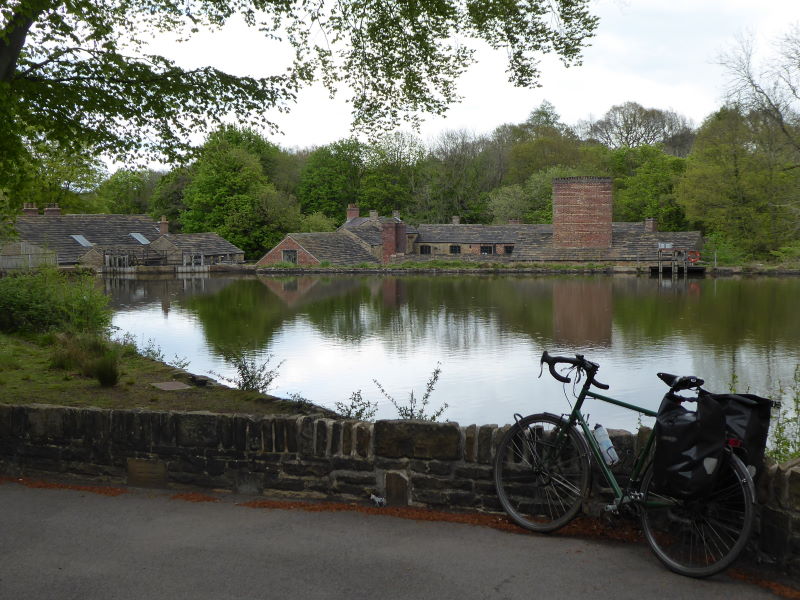 Yorkshire is a country in its own right. Sort of. So, with my international End to End collection on hold, I was happy enough to ride it from bottom to top.

But this trip had a twist. I started in Abbeydale, down on the Derbyshire border south of Sheffield, and cycled the length of the historic county up to the northern border on the Tees at Piercebridge – via the nearby spot of Zebra Hill.

Abbeydale to Zebra Hill: the first and last places you’ll find marked on the Ordnance Survey maps. A Yorkshire A to Z. An End to End in every sense. ‘Zebra Hill’? Yes, it’s there, on Explorer OL30 (Wensleydale & Swaledale), in black and white.

Zebras are equids (horselike animals) but are closer to mules than horses. They have a reputation for being stubborn and difficult, and aren’t suitable for domestication – Queen Charlotte had one in 1800s England but gave it away as it was troublesome. The animal ended up stuffed and on display in a York pub, the Blue Boar, which is still there on Castlegate, though the zebra has long since disappered. You can meet a zebra at Equine Dreams of Bawtry, who claim to have the only publicly accessible one in Yorkshire. His name is Ziggy

Today was all about Abbeydale, attained via a clanky, two-carriage Northern service down to Sheffield. Steely central roads and haphazard cycle lanes took me past the Grand Mosque and a rather inviting area of ethnic restaurants and shops, and indie boutiques, bars and cafes.

There was even a snooker cue shop, a reminder that Sheffield – Britain’s fourth-largest city – is the home of snooker’s world championships.

I was pleased to see a cycle-cafe, Amici e bici. One day I’ll open an Italian-style bike cafe by the seaside in a wooden shack and call it Bici Hut.

My Yorkshire End to End A to Z started right here on the border, where Derbyshire finishes and Abbeydale, Yorkshire, begins. The sign may only be for ‘Sheffield’, but the historic county boundary – the one that matters – is here too.

My first personal encounter of the trip was a very pleasant one. The chap who lives in the first house in Yorkshire was curious to see me taking pictures of a zebra and we got chatting. I’d suspected, by the way he was hanging around outside his house, that he might be lonely, keen to engage even with scruffy passing cyclists doing improbable photo-shoots with replica animals.

In fact he was waiting for a few friends for a judiciously-distanced teatime meetup in his garden. He lost his wife four years ago but has got into dancing, and has made plenty of new ‘friends who happen to be ladies’, he said respectfully, some of whom he holidays with. As an exemplar of the ‘cheerful West Yorkshire senior citizen looking on the bright side’ he came right out of central casting. I salute you, sir.

My trip began. From here, a decent bridleway runs downhill past the golf course to Beauchief Abbey, after which Abbeydale is named. There’s not much of it left now, and the area’s main attraction is actually Abbeydale Industrial Hamlet. The former scythe-making works was one of the significant early movers, shakers and smelters in the Industrial Revolution: mass-produced steel started right here. It’s now a lively museum, with period buildings picturesquely sited by a lake: picturesque enough for me to take a picture, with zebra smuggled in, a theme for the trip.

Abbeydale is a pleasant, leafy part of Sheffield, with woods and that lake – in fact, Ecclesall Woods is said to be the largest urban wooded area in Europe.

But I wasn’t staying here tonight. I took the train to nearby Hathersage to stay with my friends Mark and Jennifer, and we toasted the start of my trip at the Plough, Grindleford, in the most appropriate way possible: a pint of Moonshine, the flagship pale ale from Abbeydale Brewery.