The sixth of my Rivers Rides was a varied two-day, 80-mile trip from remote moortop to muddy estuary along the River Nidd. Day 1 featured monster chess pieces, alpine views, snow and sun, unusual pork pies, a little bit of Italy, and a taste of the World’s End. 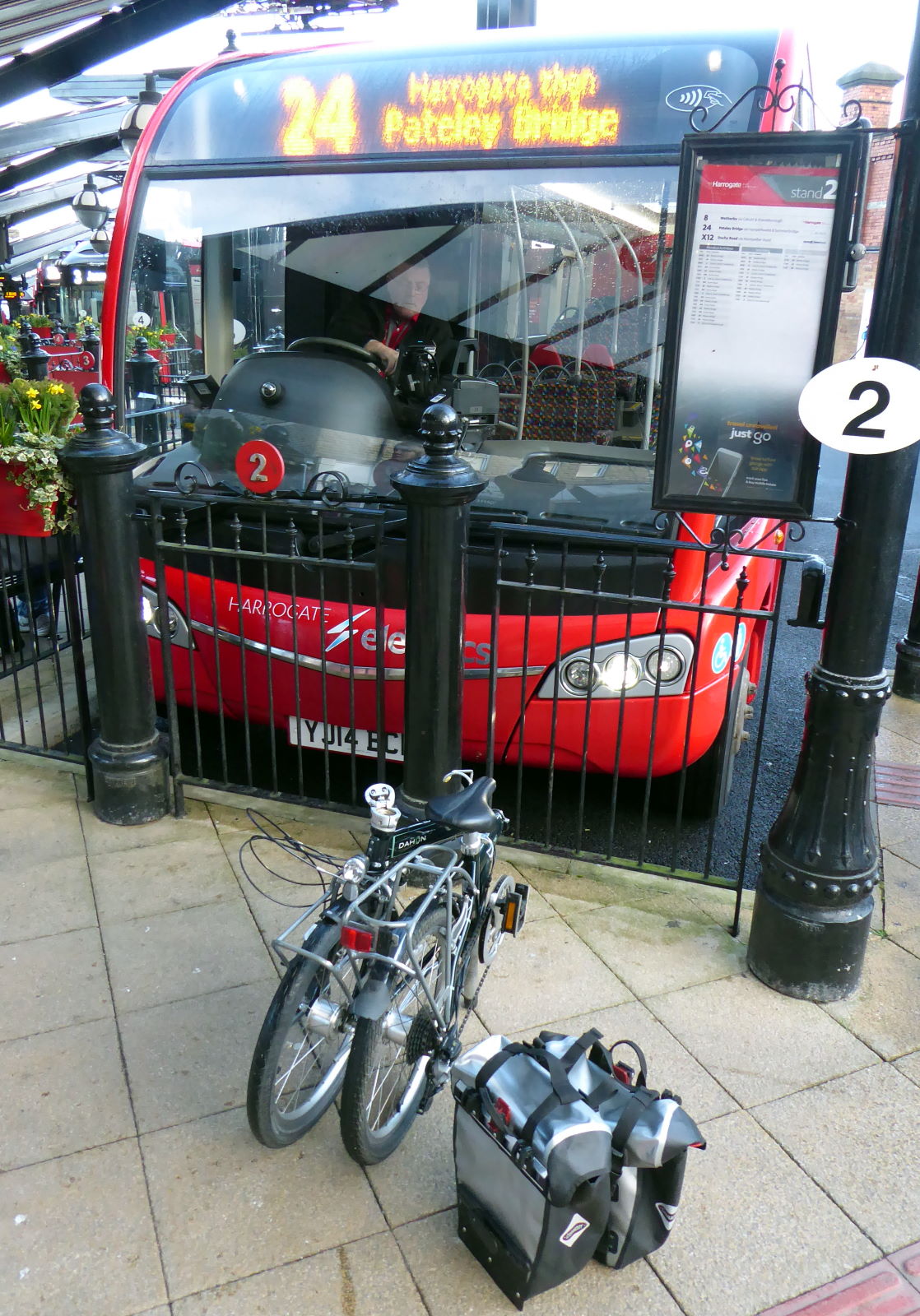 Getting near the source needed a bus (pic) which meant the maiden trip for my new (third-hand) folding tourer, or possibly touring folder: a Dahon Speed TR.

I was the only passenger on the 24 from Harrogate to Pateley Bridge, and the only user of the back roads from there northwest up along the Nidd to its source.

No identity problems with this river. There may be impostor Derwents, Calders and Ouses, but there’s only one River Nidd.

Less celebrated than the bigger dales, Nidderdale is a real cracker, an underrated gem, a connoisseur’s delight. And great for pork pies.

The nearest you can get to the origin of the Nidd on a bike is the topmost of the three reservoirs in Upper Nidderdale: Anagram (pic). 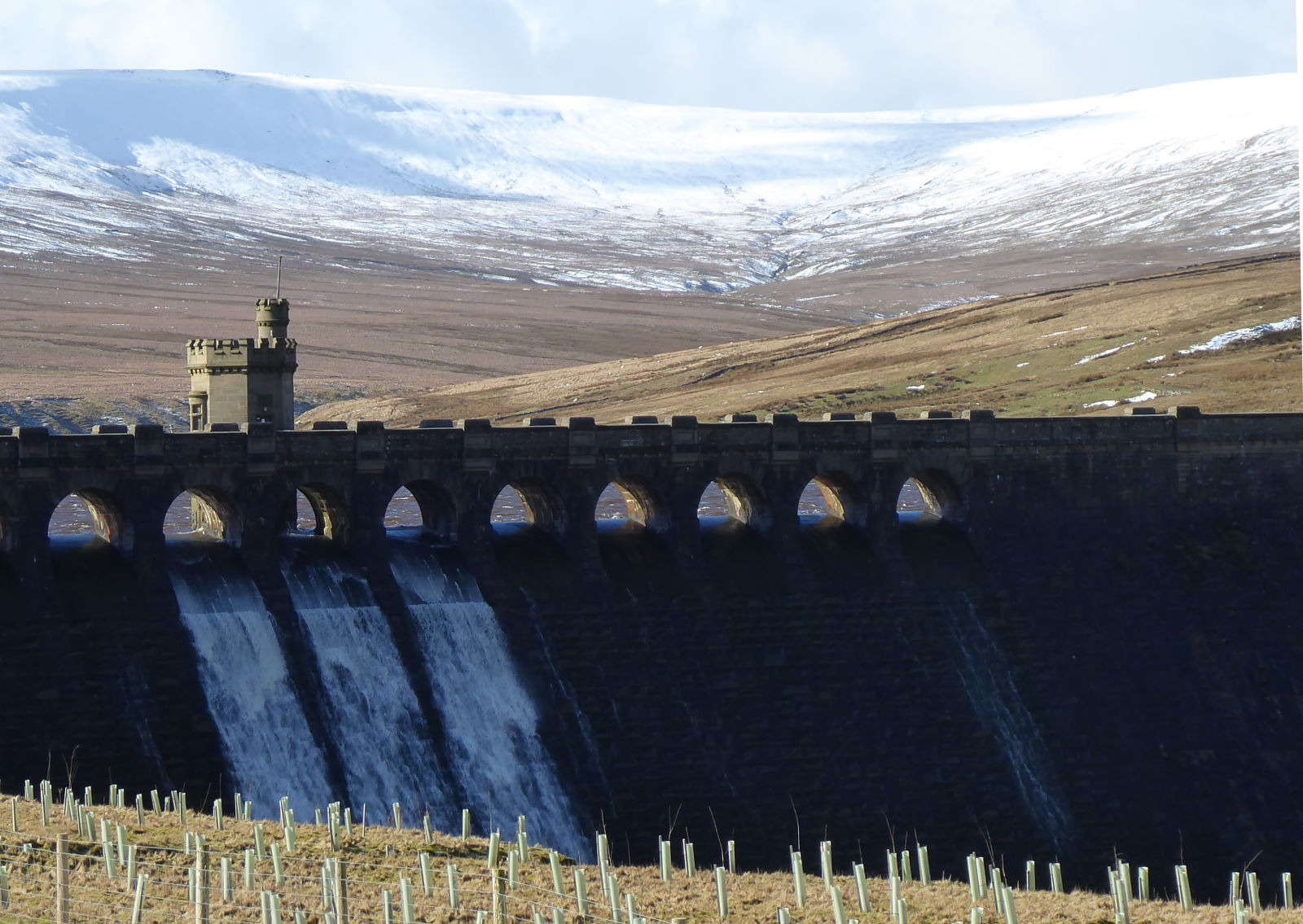 Oh, sorry, Angram. An anagram of ‘reservoir’ is ‘river rose’, though, which is appropriate. The Nidd rose to fill Angram in the early 1900s when this mighty retaining dam (pic) was built, along with Scar House’s even bigger one slightly further down, and Gouthwaite towards Pateley Bridge.

I was astonished to learn that their waters supply the parched population of Bradford, via a pipe that runs almost all underground for 30 miles, working purely on gravity. I’ll remember that next time I quench a curry there.

It was a glorious cold but sunny morning, and there was fresh snow on the tops (pic). That’s Great Whernside in the distance (not to be confused with the confusingly higher Whernside, of Yorkshire Three Peaks fame). The Nidd coalesces there, on its slopes.

Unfortunately this giant rook was the only one of the chess pieces left from the dam’s original design. 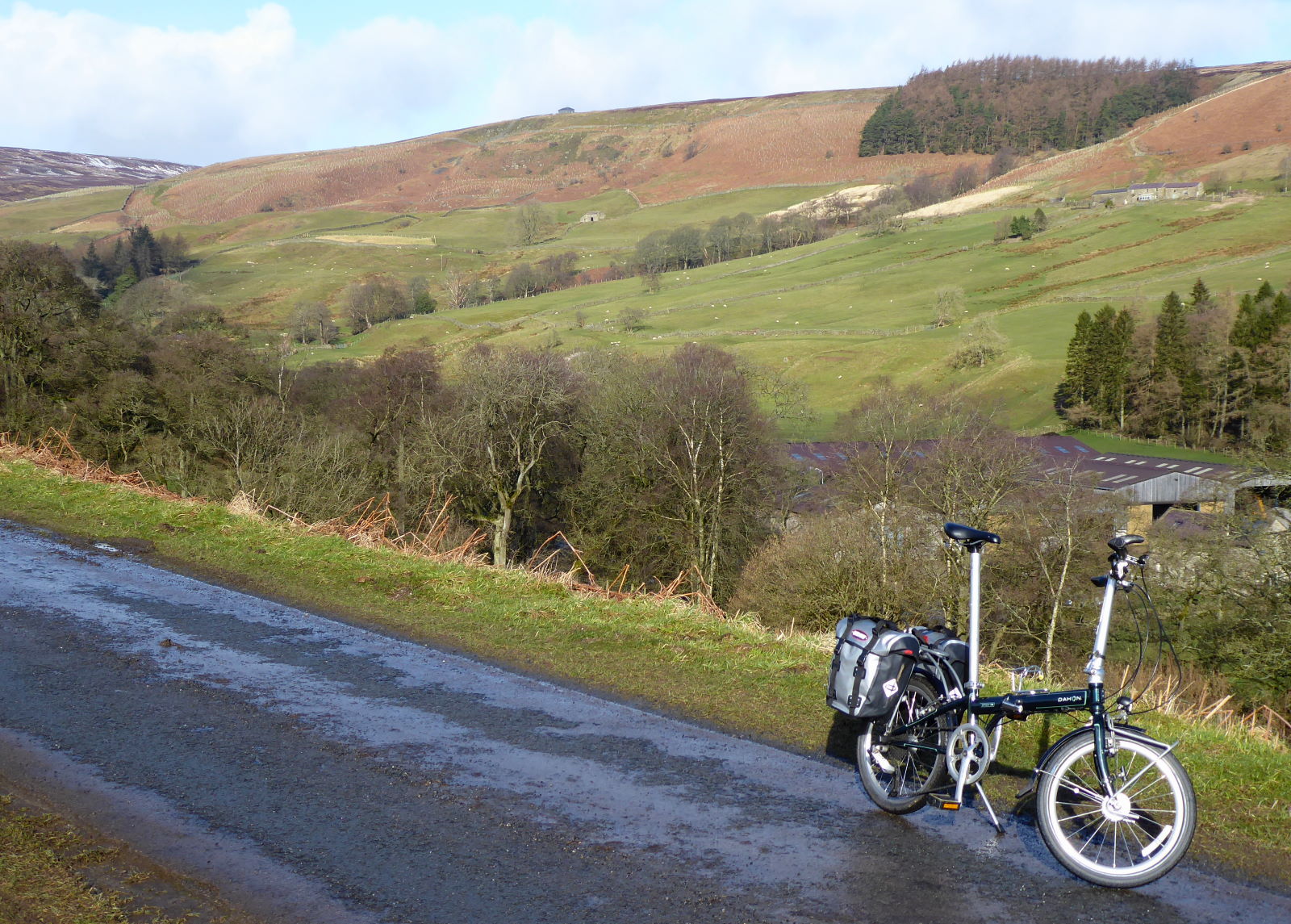 I’d slogged twelve miles uphill into the wind from Pateley Bridge, so now I could enjoy freewheeling the same distance back down the lovely upper dale (pic).

The four miles of smooth tarmac up to the reservoirs from Lofthouse is a private road belonging to Yorkshire Water, but you’re allowed to cycle it. I wasn’t the only one doing so this fine morning, but I was probably the slowest. 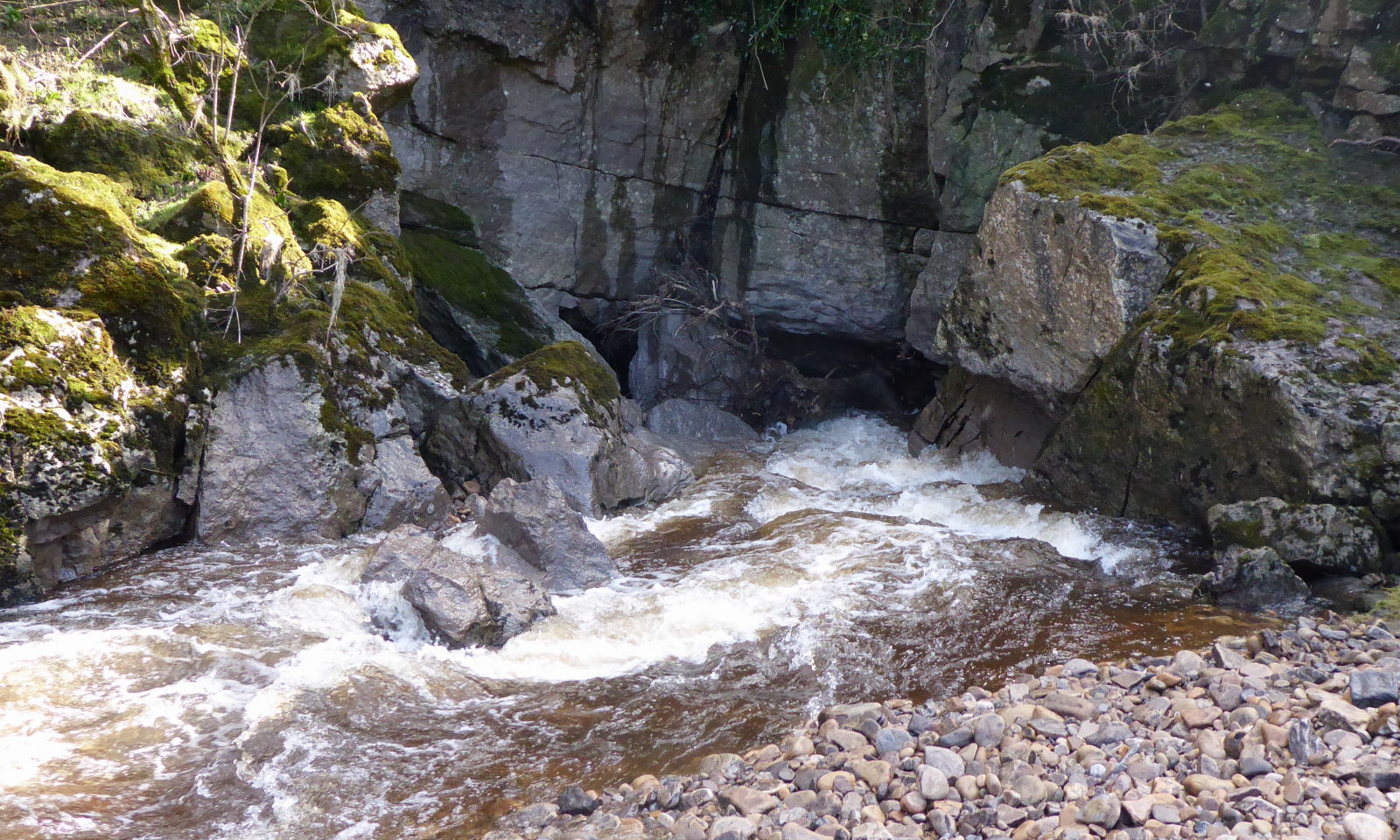 At Goyden Pot, a couple of miles down from Anagram River Rose, the river – like a Prime Minister avoiding scrutiny from an expert TV interrogator – does a disappearing act, ducking down into a hole (pic). 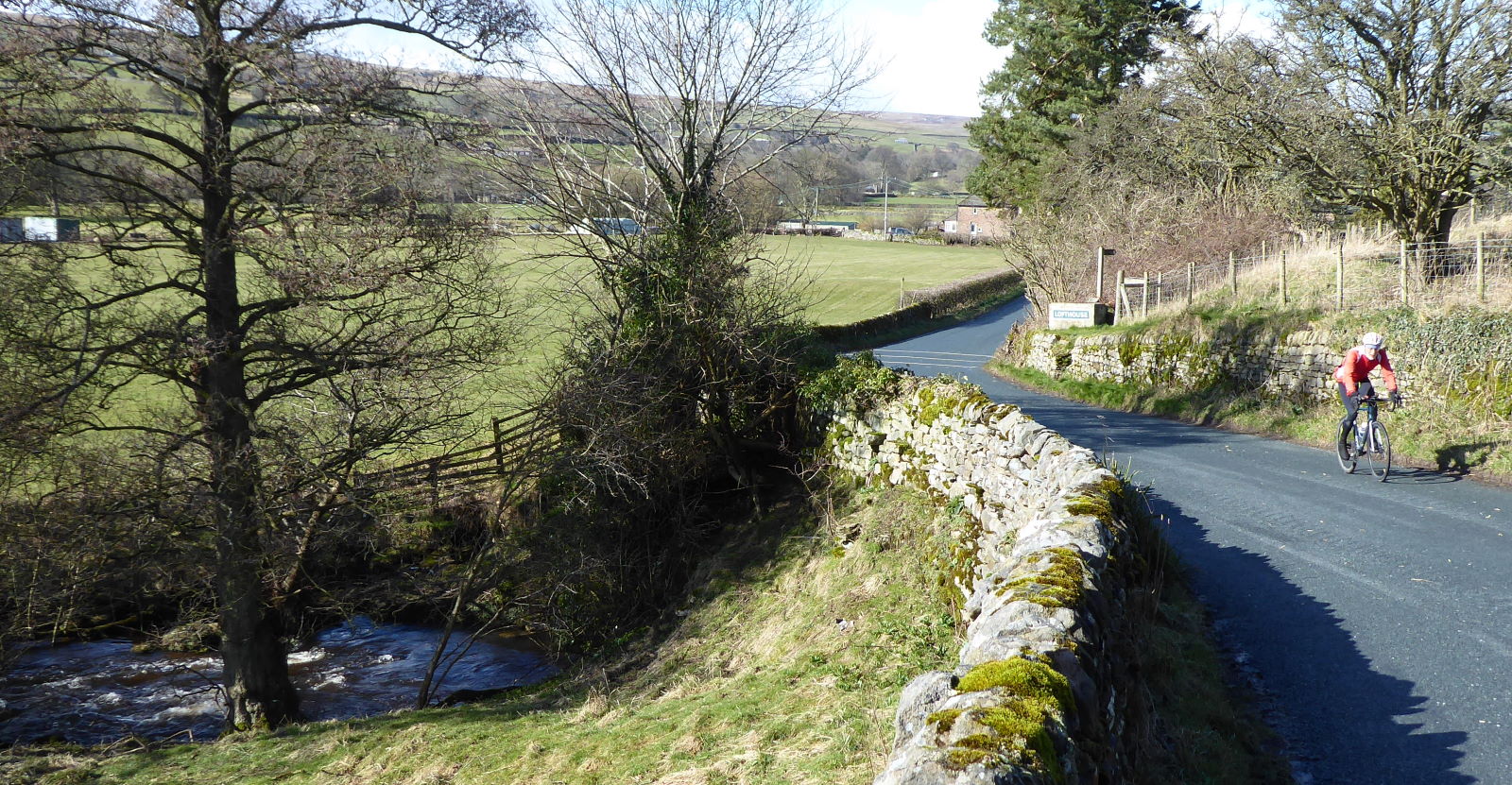 The course of the Nidd when in spate continues dry for a few hundred metres. It gathers a few springs and restarts, and just outside Lofthouse it’s rejoined by the Goyden Pot branch, which appears out the side of a hill (pic) like a Prime Minister popping up to make some simplistic, populist, unbudgeted pledge in an impromptu press conference. 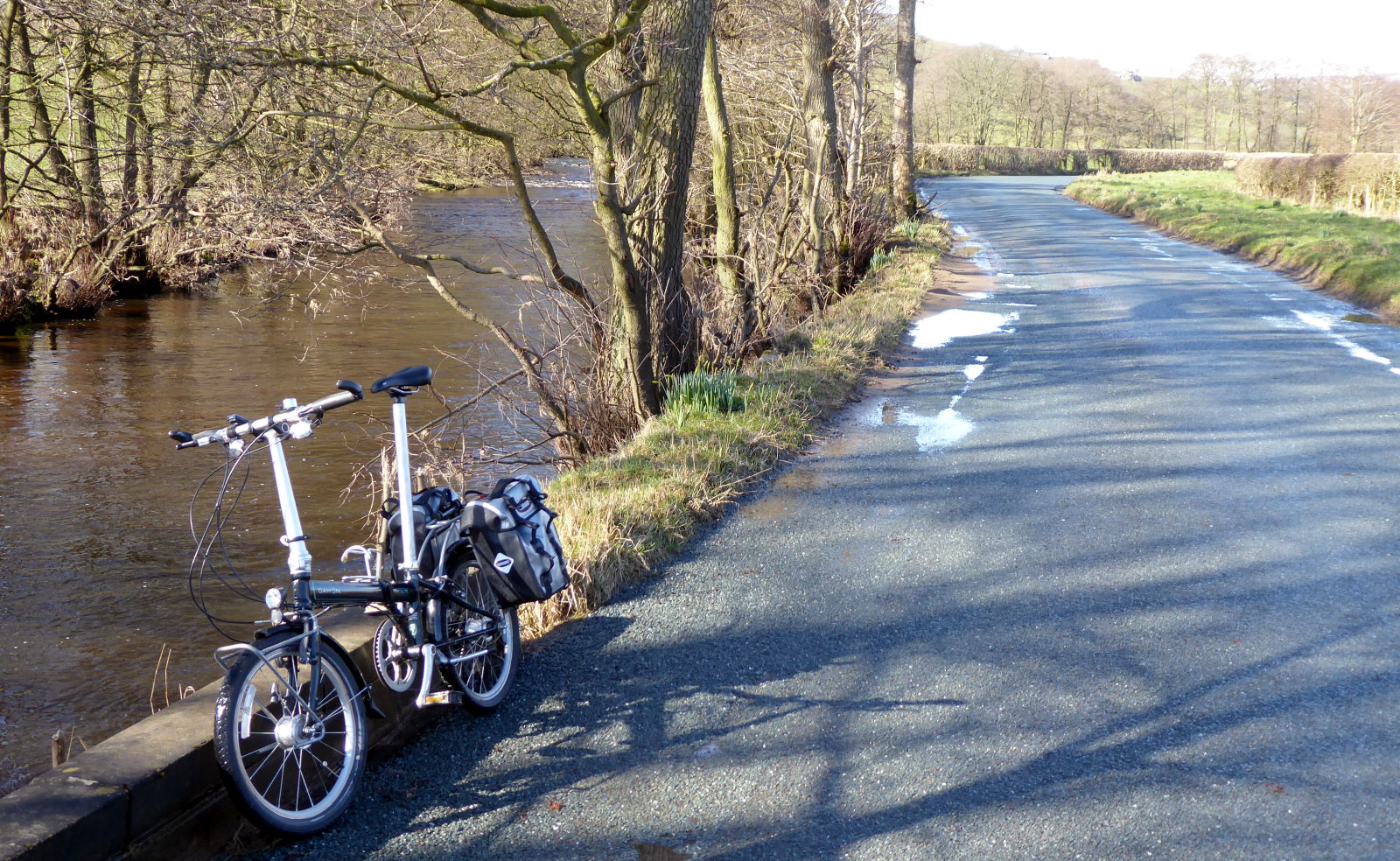 Anyway, the road continues alongside the Nidd… 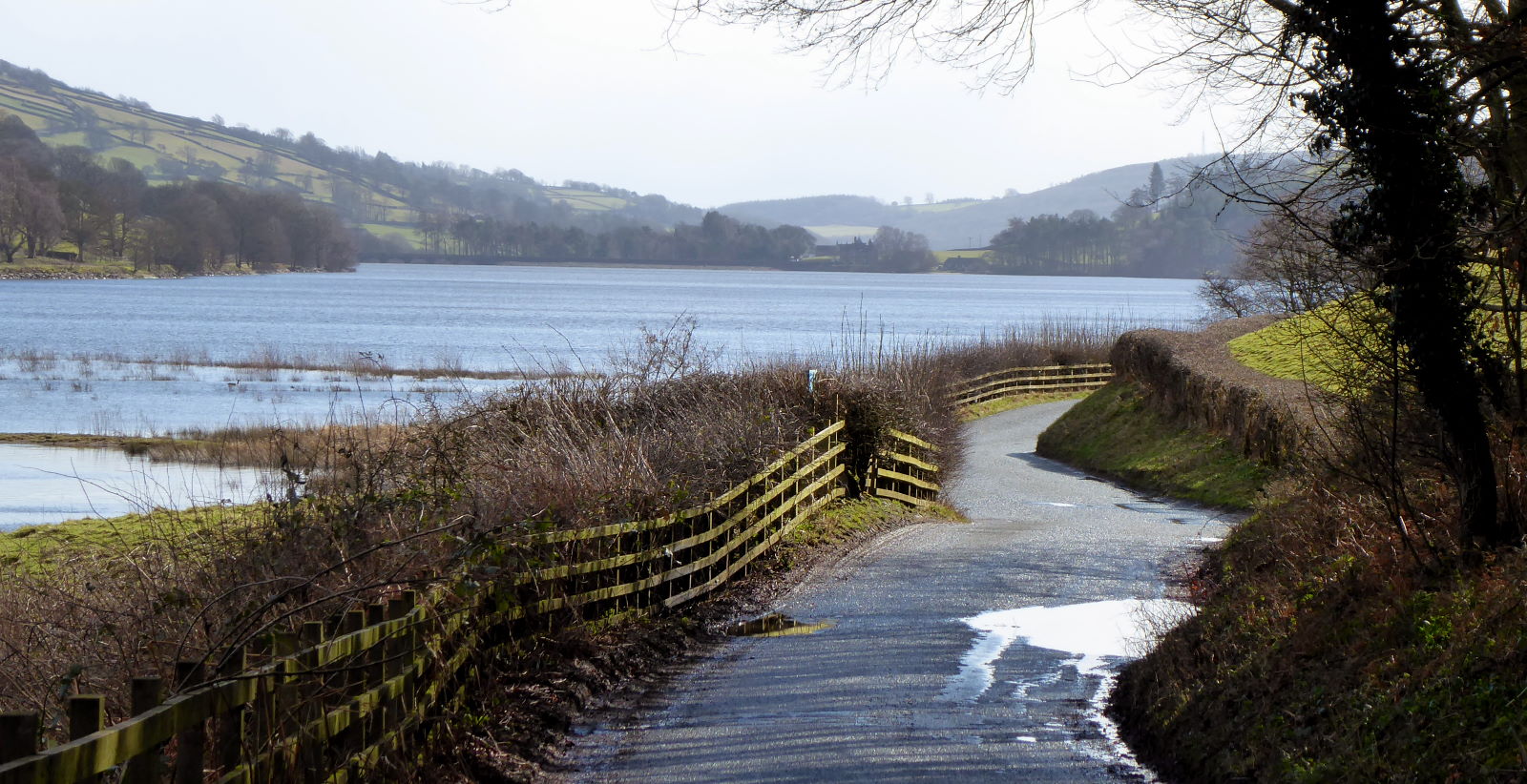 …and alongside Gouthwaite, the last of the reservoir chain (pic). 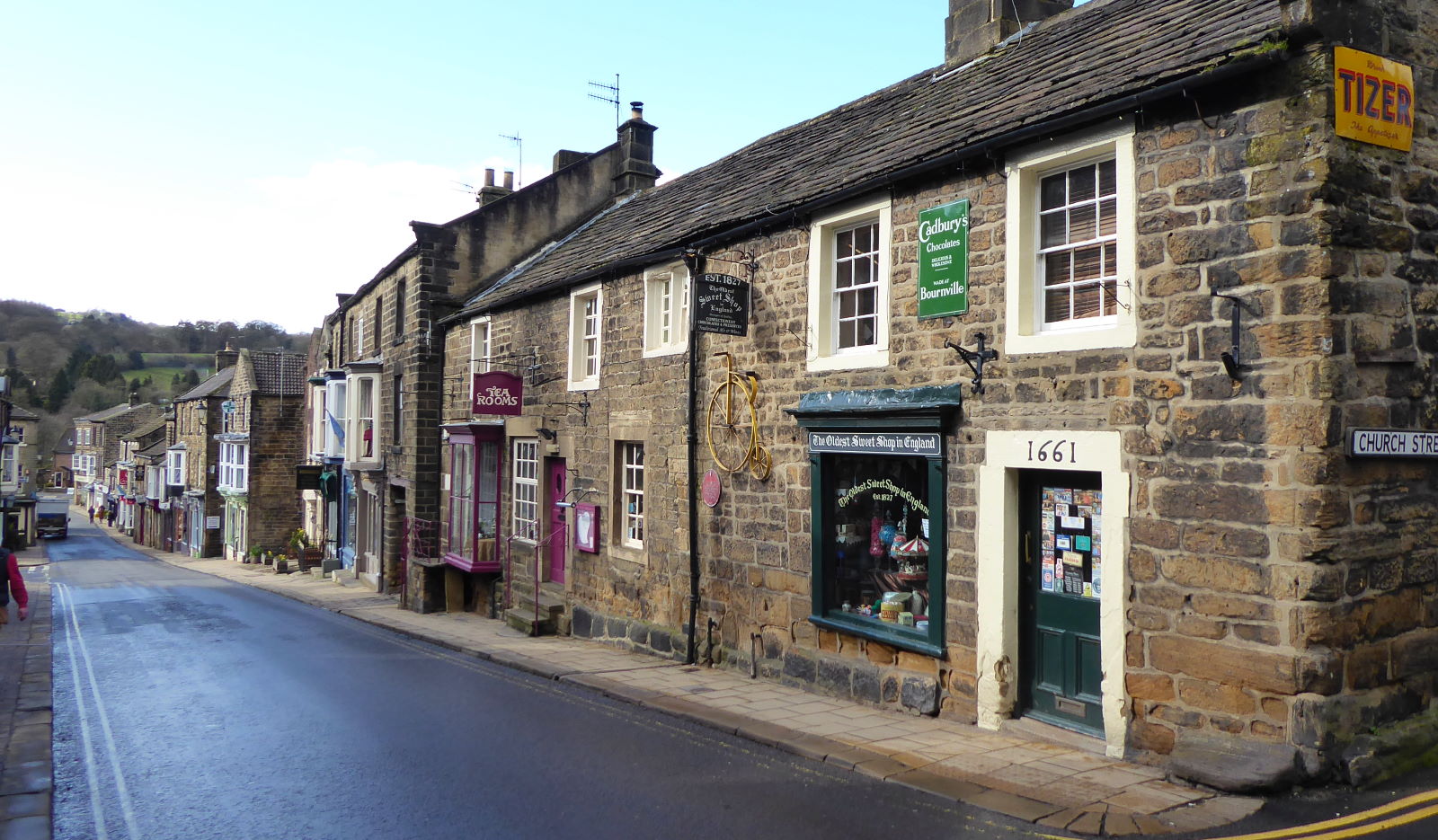 Back in Pateley Bridge, where my bus had decanted me and bike earlier in the day, I ambled up the High St and stopped to admire the yellow ‘penny-farthing’ on the wall of the Oldest Sweatshop in Britain (pic), dating back to 1661. Oh, sorry, sweetshop. 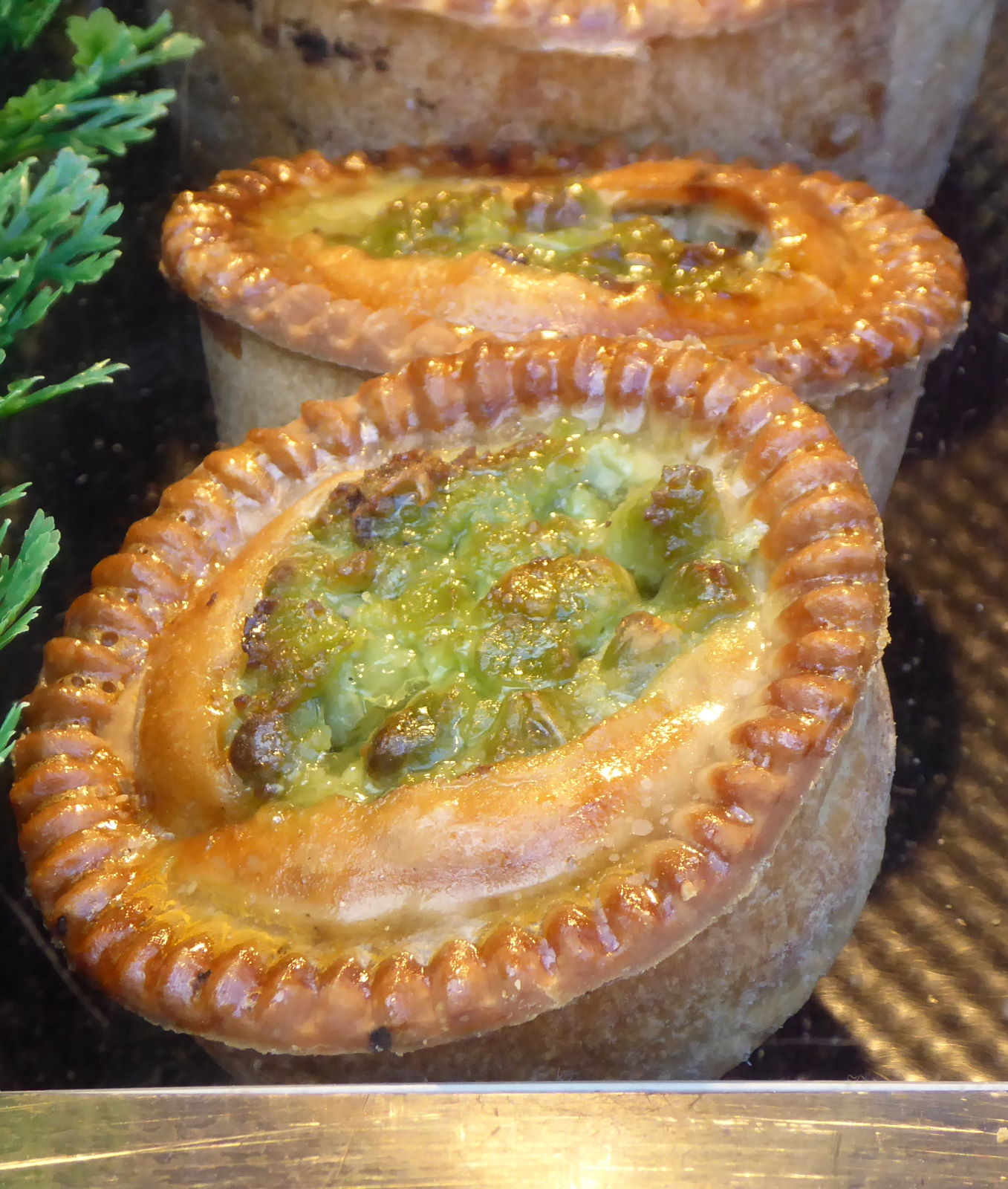 I also snacked on a fine piece of fusion cuisine – the fusion being Yorkshire–Yorkshire – from Kendall’s the Farm Butcher: a pork pie with mushy peas (pic).

Mindful of floods on the south bank road alongside the Nidd – the bus had waded through them on my way out – I took the higher alternative on the north bank to Summerbridge, and past a place entertainingly called New York. Alas, no amusing signpost photo opportunities: it’s an industrial estate.

The sun was out, the fields were a glistening emerald, and I was happy. Perhaps it was the mushy peas. 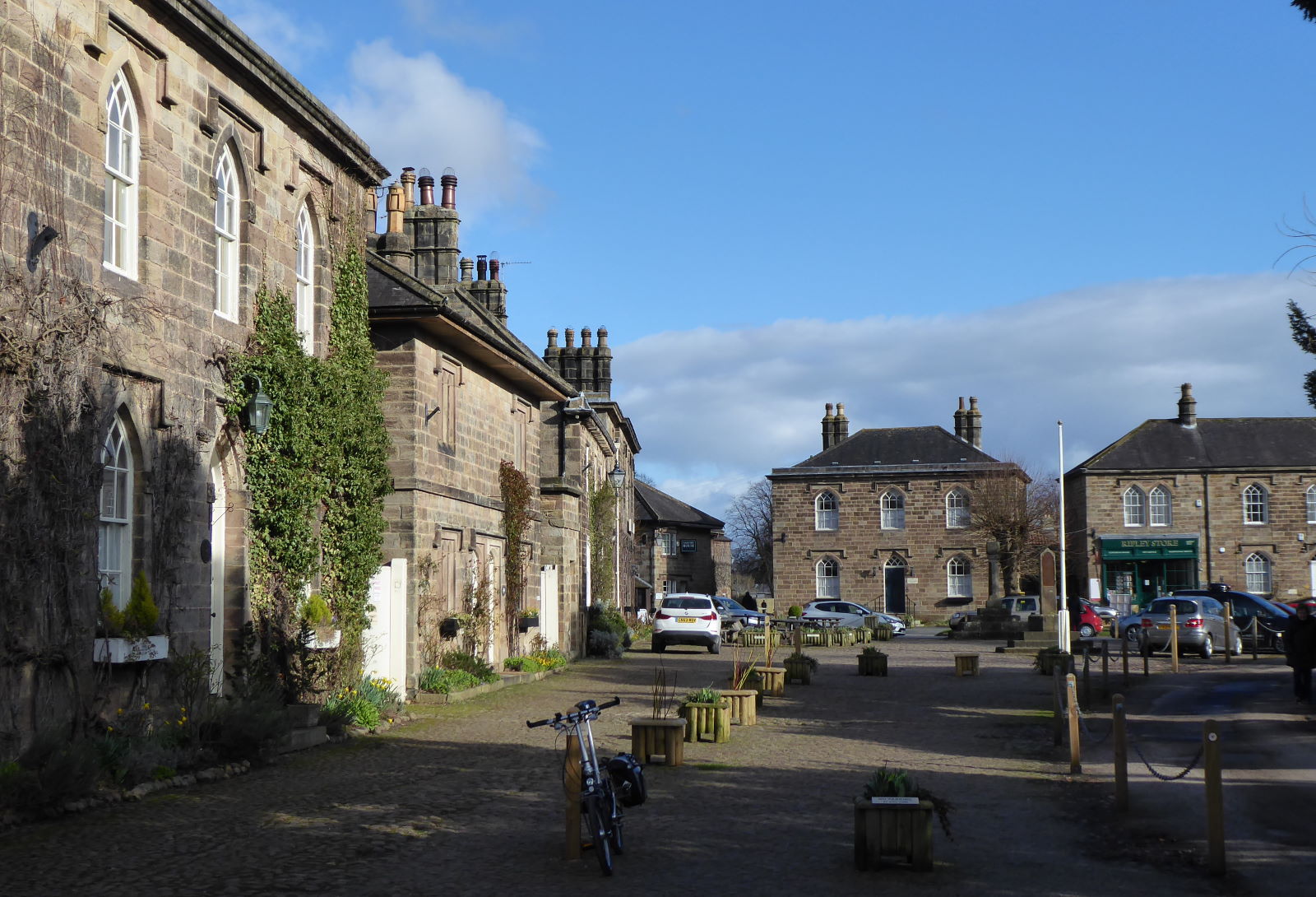 I rode over the toll bridge at Hartwith Mill (cars 35p, bikes free) and went through Clint along the Sustrans route to lovely Ripley, with its castle and Italianate village (pic). So Italianate that it’s famous for its ice cream, but it was too cold for ice cream today. I didn’t want raspberry ripple all over my gloves. 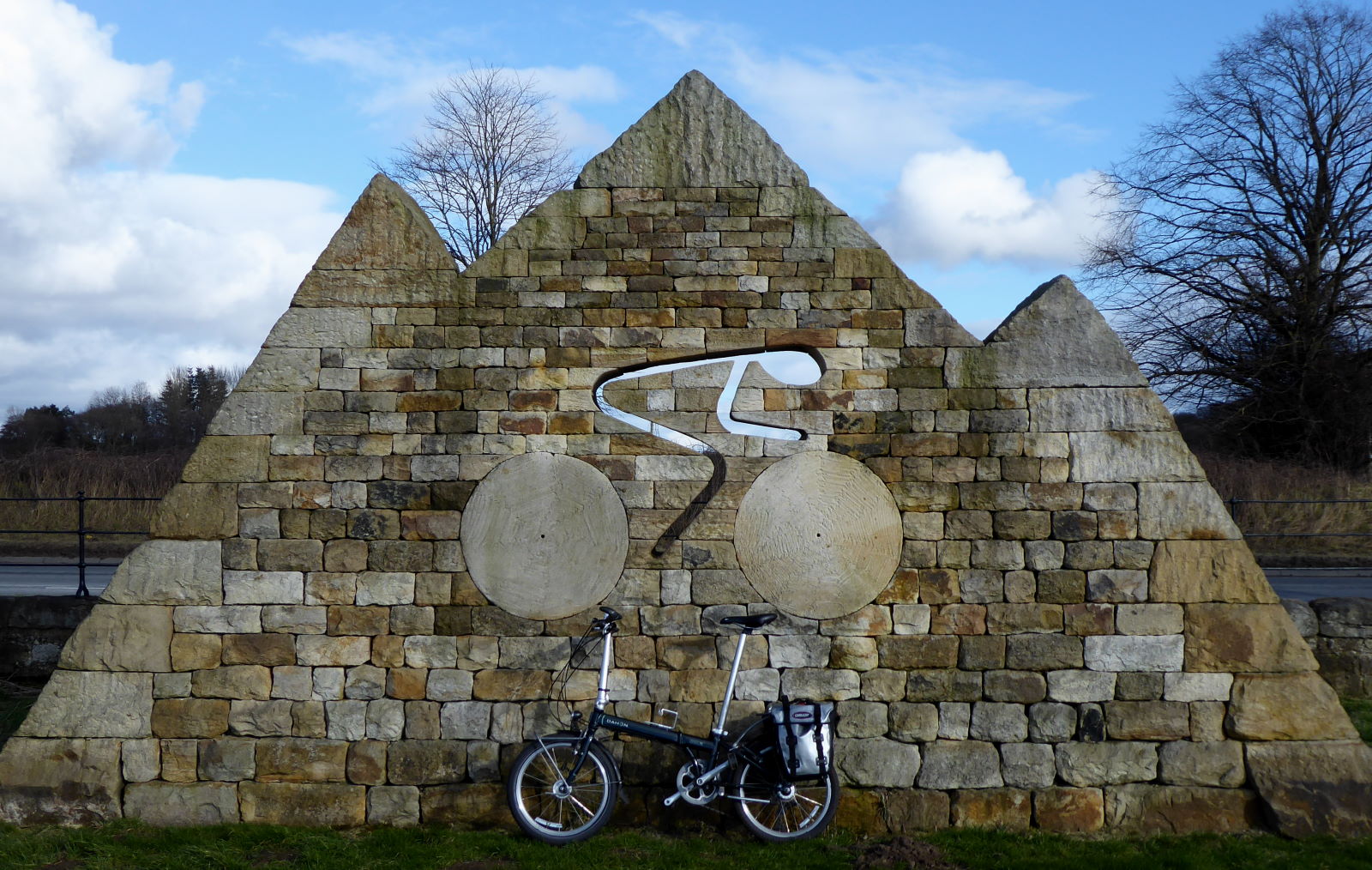 Just outside Ripley is this monument (pic) commemorating the Tour de France 2014, which came past here. Not on the Sustrans path, I presume: the cattle grids would outrattle any stretch of Paris-Roubaix. 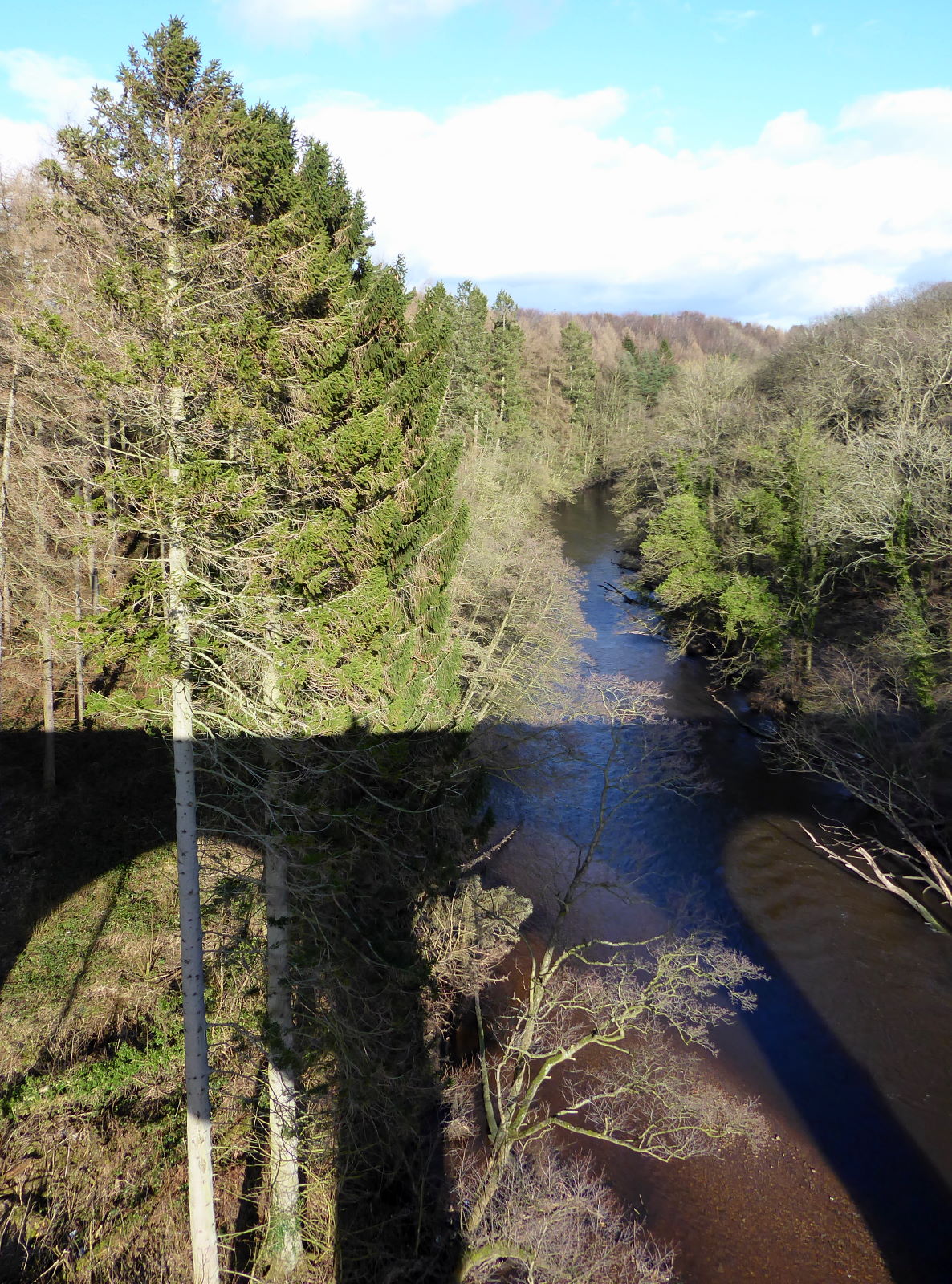 Then it was the delightful railtrail towards Harrogate, which culminates in the splendid viaduct over the Nidd (pic).

It’s a grand view this way, with the shadow helpfully hinting at the grandeur of the viaduct itself.

The other way is less impressive. It’s a sewage farm. 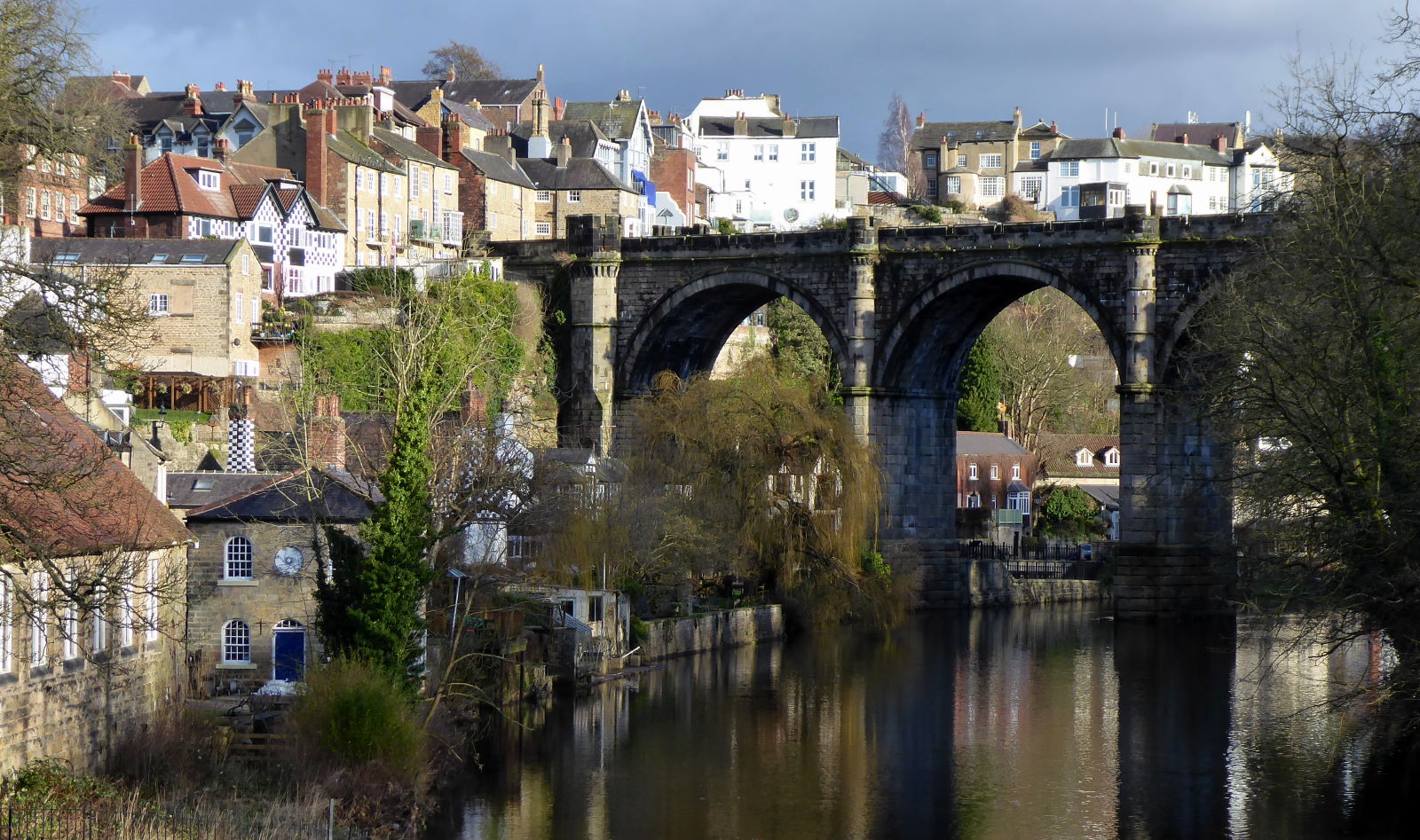 Journey’s end today was at Knaresborough, its houses stacked up on the gorge side in a rather non-English way (pic).

The town’s most famous daughter is Mother Shipton, the legendary 16th-century seer who predicted the End of the World, according to fanciful 19th-century fabrications, for for 1881. Clearly nonsense. Now, 2020 on the other hand, I could believe. 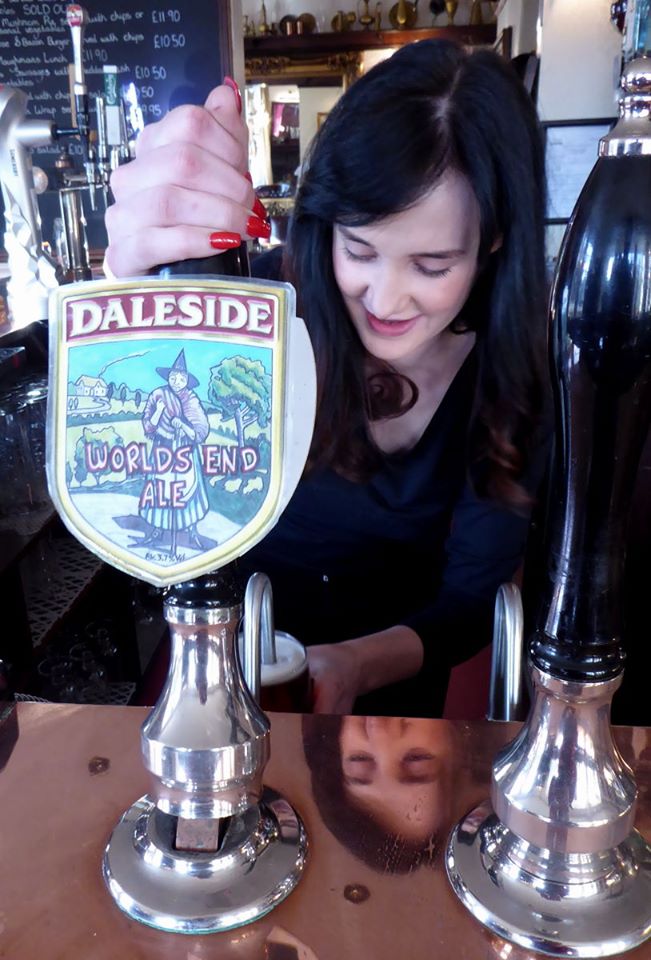 To celebrate her gloomy soothsayings I dropped into the friendly World’s End pub by the riverside, and enjoyed a pint of Daleside World’s End (pic) to round off the day.

A refreshing light session beer with hints of viral apocalypse, notes of irreversible climate change, and a long aftertaste of nuclear fallout.