Day 2 of the River Don ride featured a lot of weirs, a lot of town centre, a lot of drab flatland, and glimpses of the Netherlands.

I stayed in an EasyHotel last night: £20 for a clean, modern, ensuite room right in the centre of Sheffield. No windows – an advantage, as I couldn’t hear partying students leaving Wetherspoons next door – and no telly unless I stumped up £5, which was another advantage. The room was minimally small, but just big enough to get my bike in, and almost big enough to get past the bike to the bed. 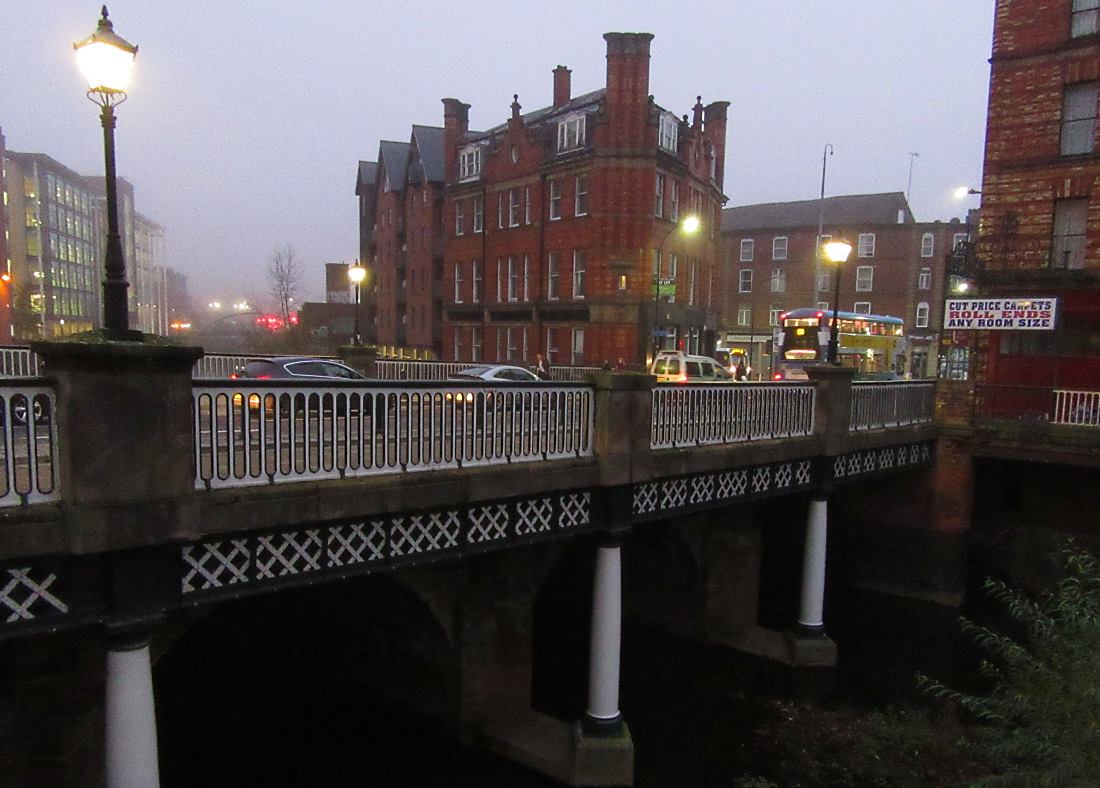 It was only a few yards to Lady’s Bridge (pic), the centre of Old Sheffield, and the start of the Five Weirs walk and bike route which follows the Don. 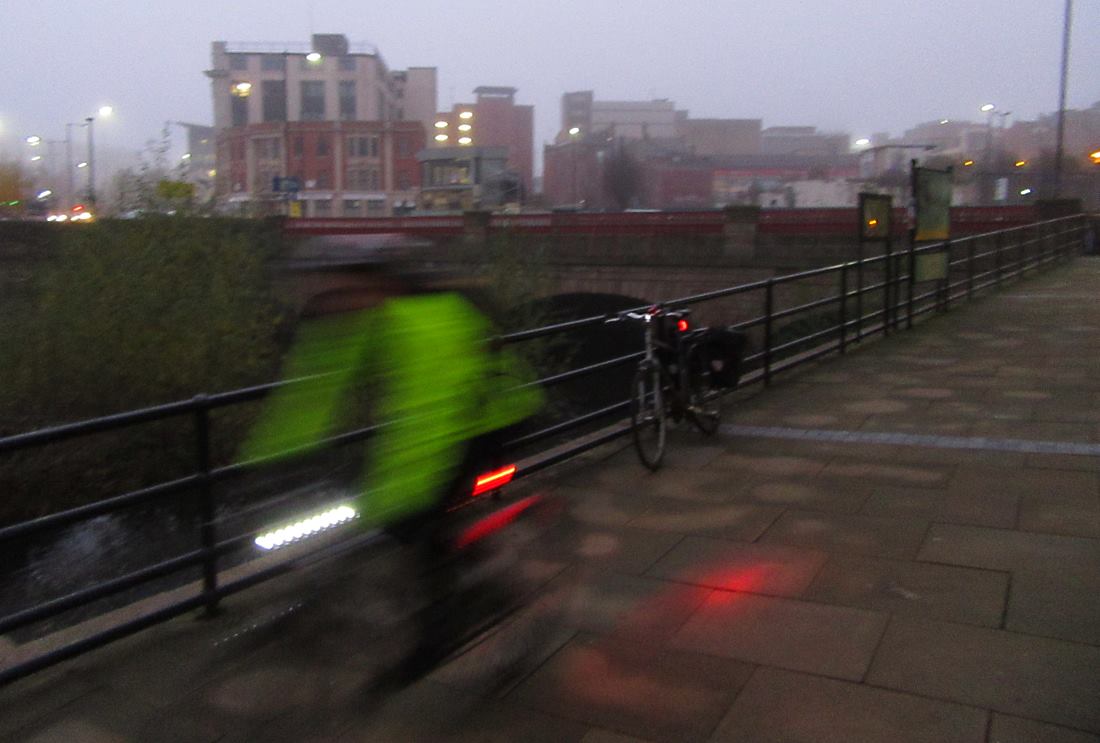 The route gives a real feel for the industrial character of the city; good surfaces and decent signage mean fast progress (pic), which was handy when getting away from the various louche young men in hoodies hanging around at bridges, smoking and sizing up passers-by. 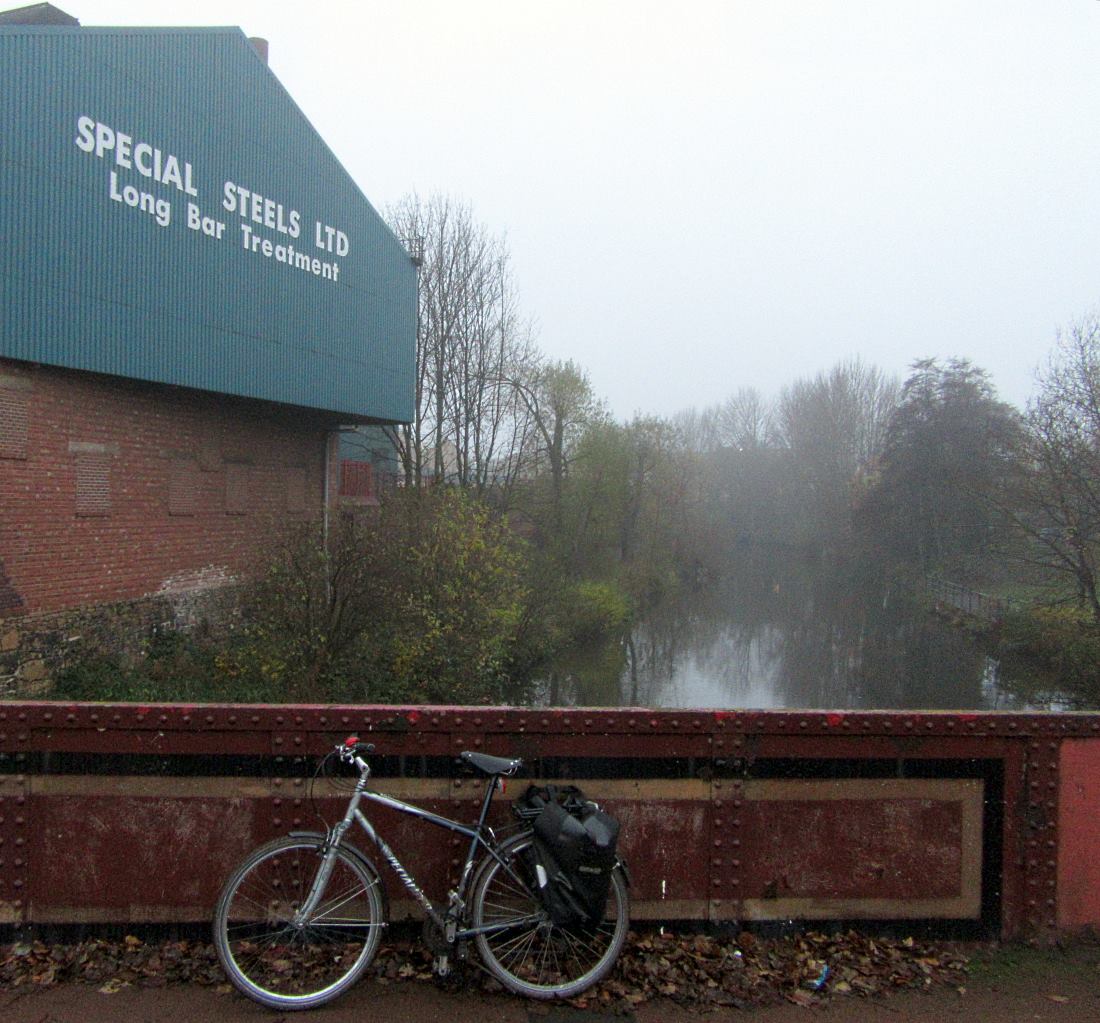 It’s not always a pretty landscape alongside this bit of the Don (pic), but it’s good to see that steel is still real. What would a self-respecting touring cyclist do with an aluminium or carbon frame?

The Don winds round Meadowhall’s enormous shopping centre (pic), where the cycle path improves markedly. I resisted the temptation to browse the 280 stores. But it was chilly and I needed breakfast and a bottomless coffee, and there was a Wetherspoon’s right there, so obviously I couldn’t resist that. 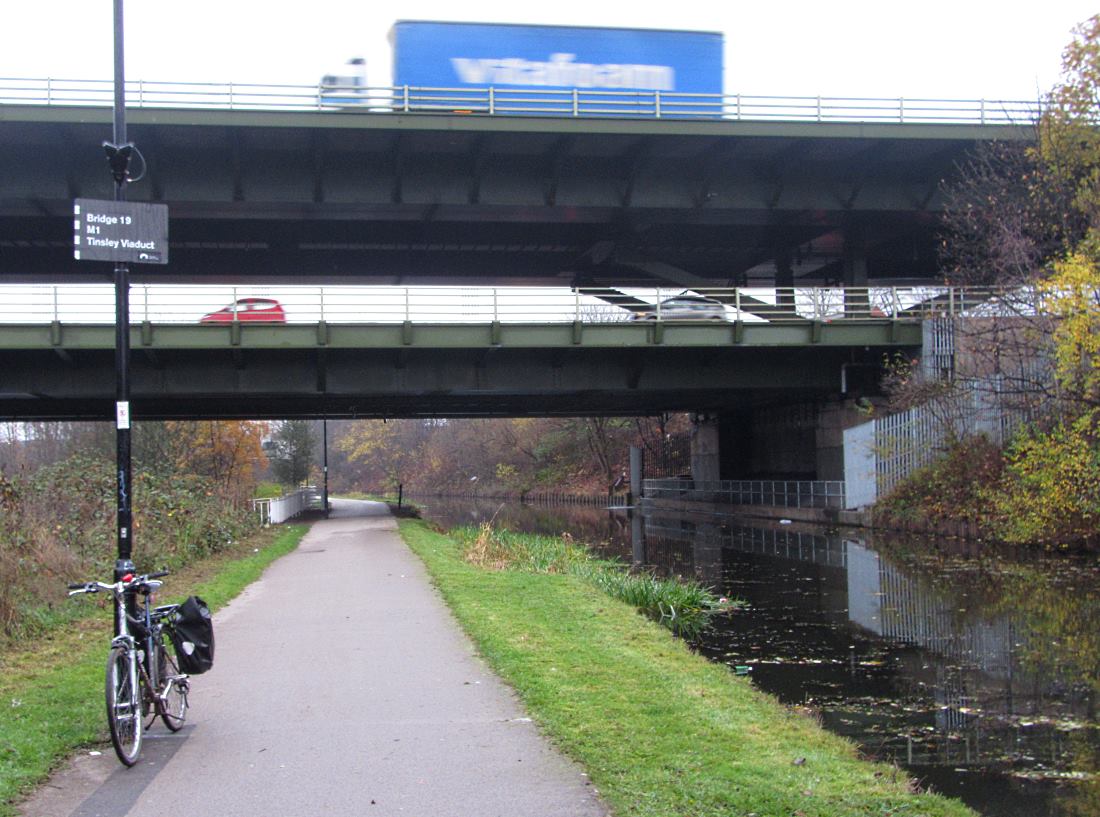 From Meadowhall to Rotherham I took the towpath of the canal that roughly parallels the Don (pic). It took me past another Donside football stadium, named the New York Stadium (after the district), which looks the basis of an epic satnav fail for someone careless. What do you mean, Rotherham United? I wanted the New York Yankees…

Rotherham town centre didn’t have much to detain me. Or so I thought until, on a back road through an industrial area, I passed JE James, which claims to be England’s biggest bike shop (pic). Passed, stopped, turned back, went in.

The staff, I must say, were friendly, proactive and positive (hello Tez and the guys): bike shops have raised their customer-service game massively in the last few years. Next to their range of shiny new road bikes, my bike looked old, cheapskate, shabby and lumbering. Next to the staff, so did I.

From Rotherham the towpath alongside the Don was muddy and drab, so I took the simple option to Doncaster, along the drab but unmuddy main road, past Conisborough Castle and into Donny itself. Despite giving its name to the place, the Don is little in evidence: no waterside esplanades or chic developments, just the odd bridge and glimpses of shrubby banks. 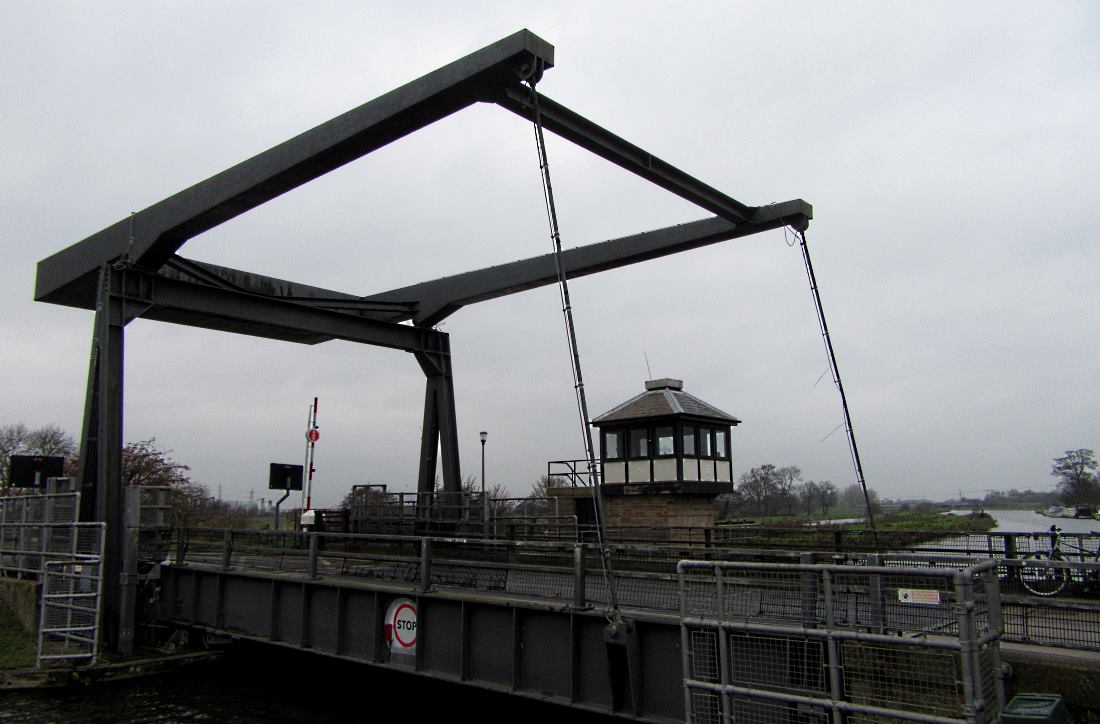 I followed the main road out through the endless retail and industrial fringes to the village of Barnby Dun where the river reappeared for virtually the first time since Rotherham. It’s all rather Dutch-looking round here (pic), with long straight drainage channels, barges, lifting bridges and flat, flat farmland. You could almost be in some nightmare parallel-universe version of Holland, in which all the cycle infrastructure was missing. 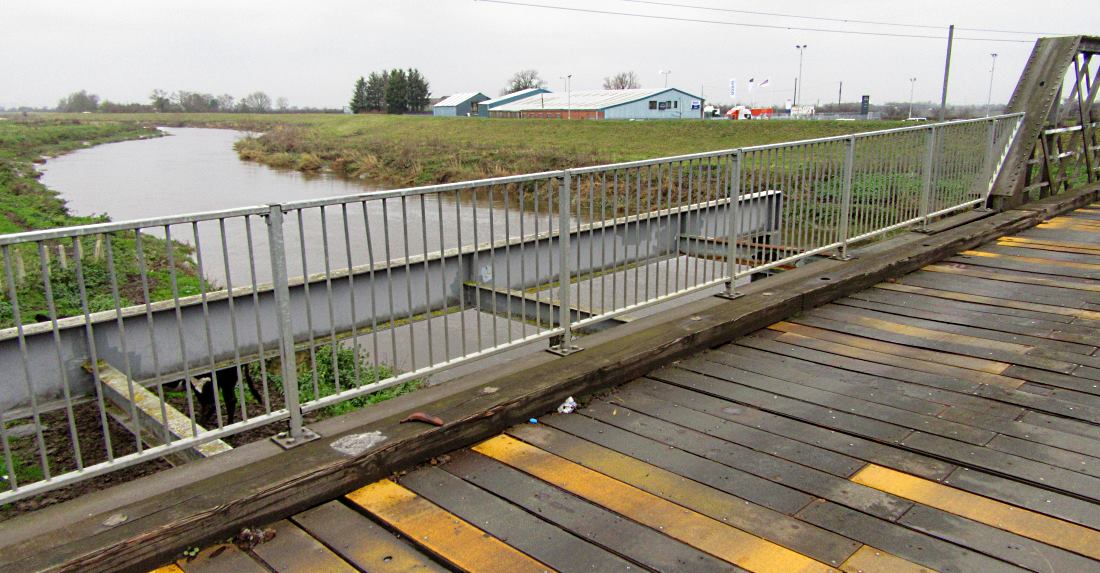 An entertainingly clanky bridge (pic) took me to the main road that goes all alongside the Don in its final stretch up towards Goole, first north, and then – turning abruptly right, as if suddenly realising it was going in the wrong direction – east.

The Don originally wiggled north-east from Barnby Dun to drain into the Trent, and formed the historic boundary between Yorkshire and Lincolnshire. However, in the 1600s, the great Dutch engineer Cornelius Vermuyden drained huge areas of eastern England and managed to divert the Don to its present course, ending in Goole. Sadly he wasn’t in charge of cycle infrastructure. 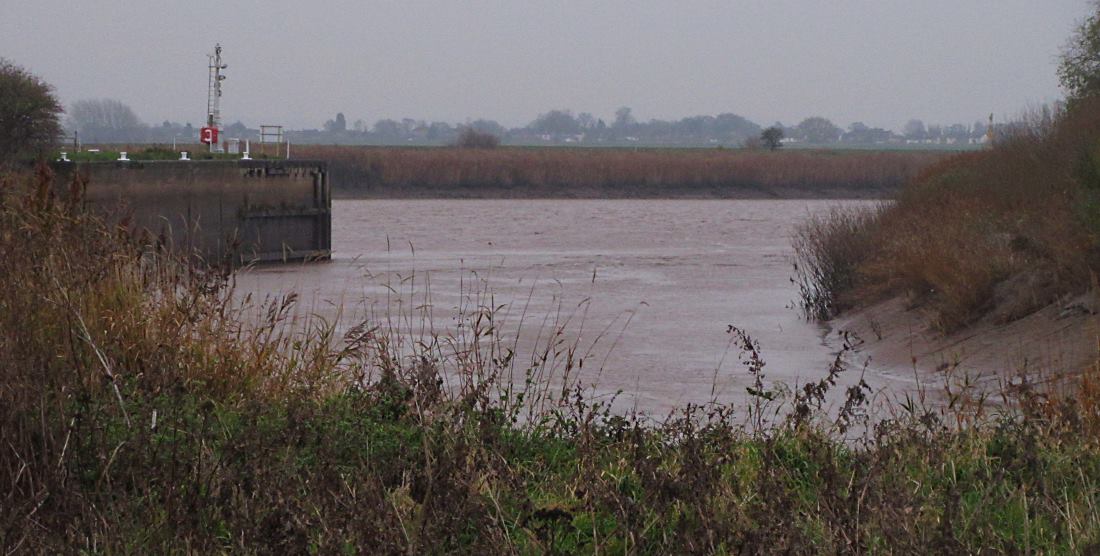 Finally – after a long push along the grassy strip between the Aire and Calder Navigation and the parallel Don, both of which empty in to the Ouse at Goole – I got to the mouth of the Don, and the end of my journey. After miles of nondescript channelling, the muddy, slimy river finishes in Goole docks (pic), the oddity of a port town that’s fifty miles inland. The pub by the mouth is named the Vermuyden. No, I didn’t have a pint there to celebrate.

The Don is probably the most workaday, least glamorous of the rivers I’ll be riding along. But the upper reaches are pleasant and nicely railtrailed, Sheffield is a buzzing city, and overall it’s certainly more convenient from York than Scotland’s Don, which is a tad longer.

Or indeed Russia’s Don, the thousand-mile waterway emptying into the Sea of Azov at Rostov, celebrated in the blockbusting Sholokhov novel Quiet Flows the Don. (And, surprisingly, the more modest English Don actually starts at a higher altitude.)

Goole was twinned, bewilderingly, with Gibraltar in the 1960s; perhaps it could look at twinning with Rostov?