English scenery doesn’t really do spectacular, but some bits of Yorkshire come close. In a country of modest geography, the theatrical surprises of Malham Cove and Gordale Scar feel as vast as anything in Norway or Chile. Relatively, anyway; and the beer’s much better. No wonder author Bill Bryson chose to live here, in the village of Kirkby Malham, for several years. 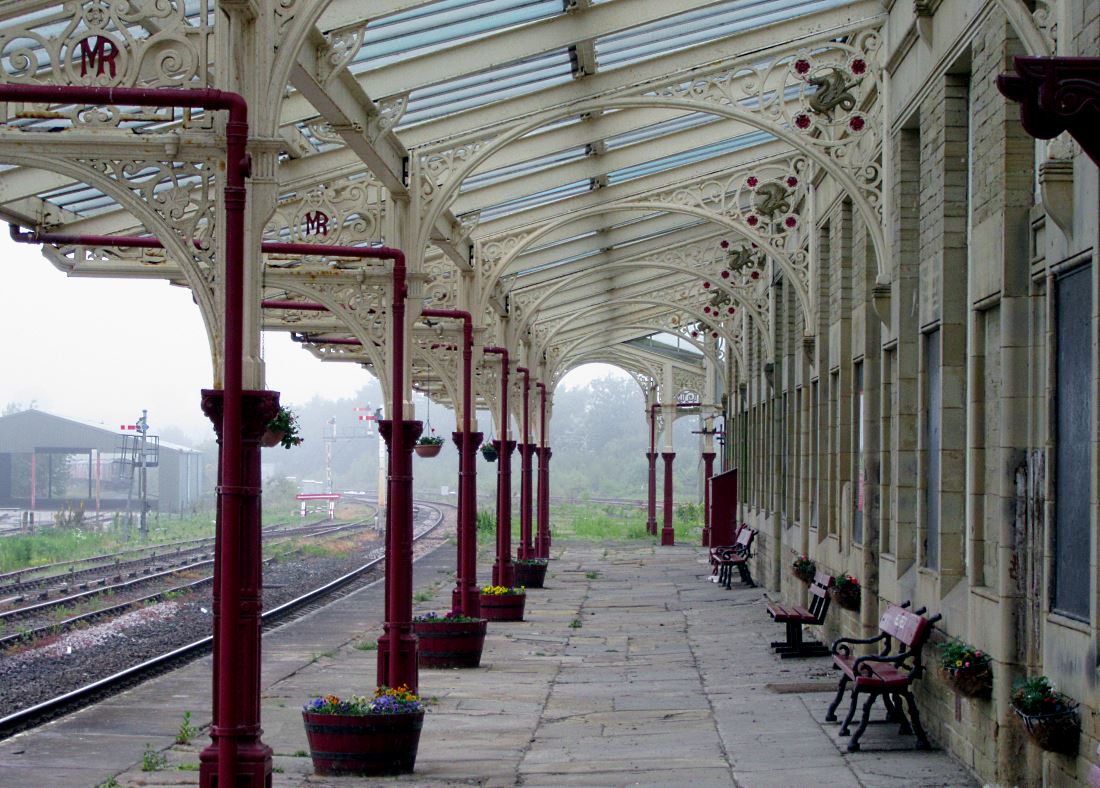 Getting to Malham by bike involved a morning train to Hellifield, on the Carlisle-Settle line. I was the only person alighting amid the station’s splendid Victorian ironwork (pic), a cross between an empty greenhouse and a deserted garden centre. 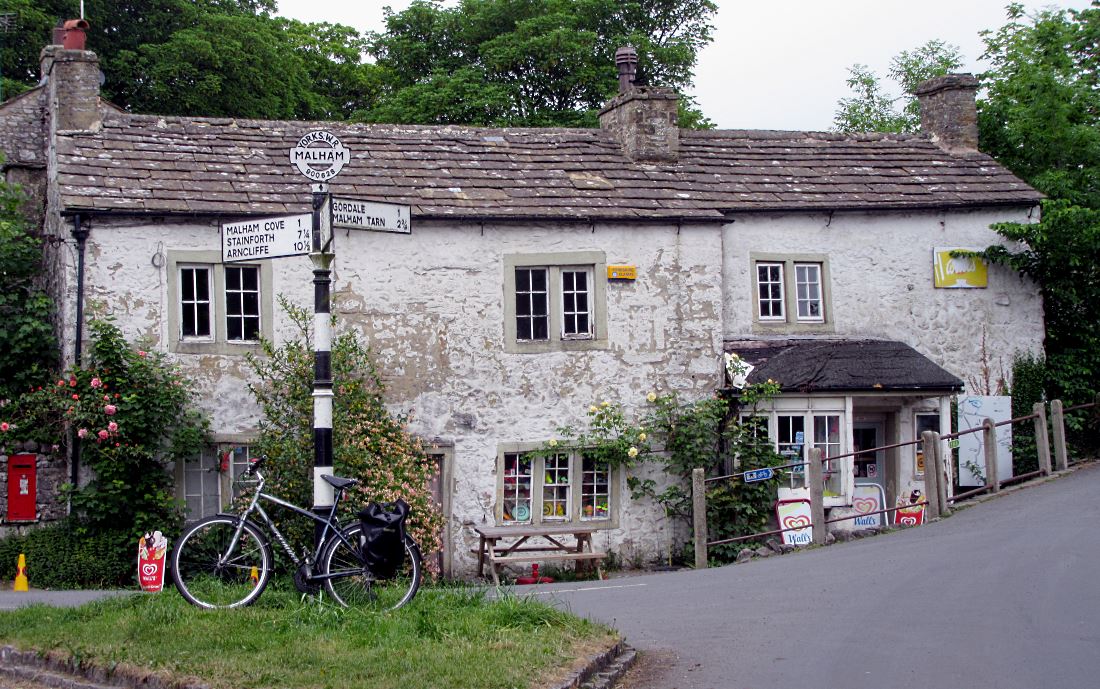 The village of Malham (pic), at the foot of Cove and Scar, was a few rolling country miles up the road. I’ve stayed at the hostel here in the past, and enjoyed hearty pub meals with fine pints of supra-Chilean quality and sub-Norwegian prices at the Lister Arms. 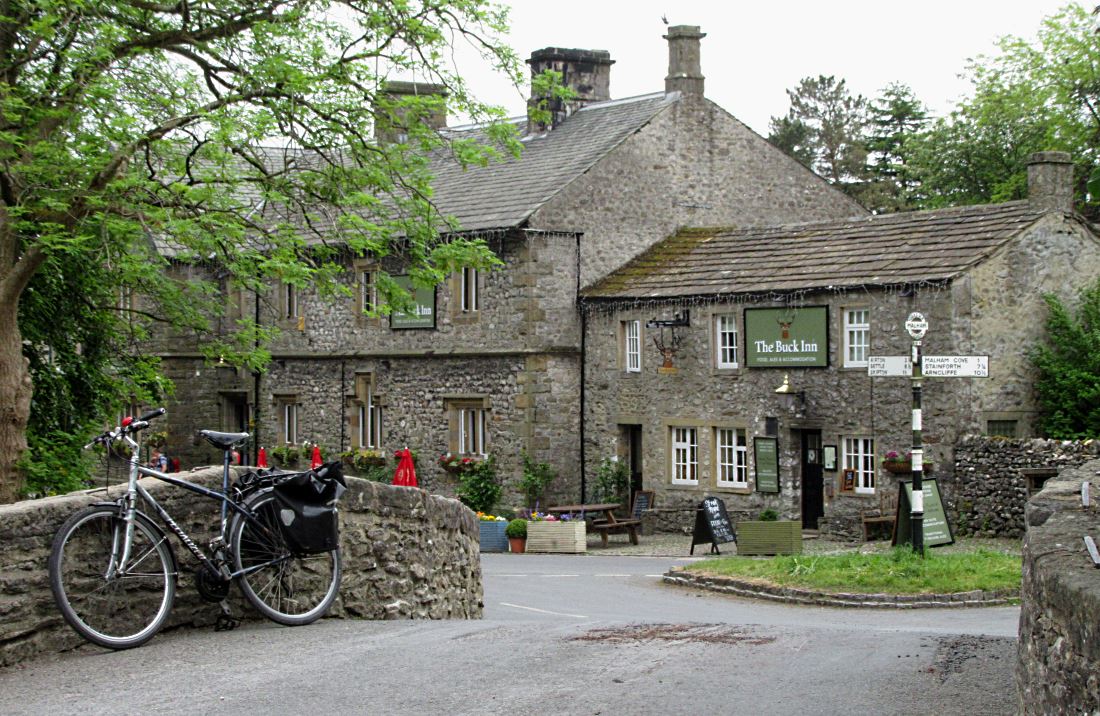 It was before nine when I arrived (pic), before the weekend road cyclists pitched up in need of coffee and cake, and all was very quiet. 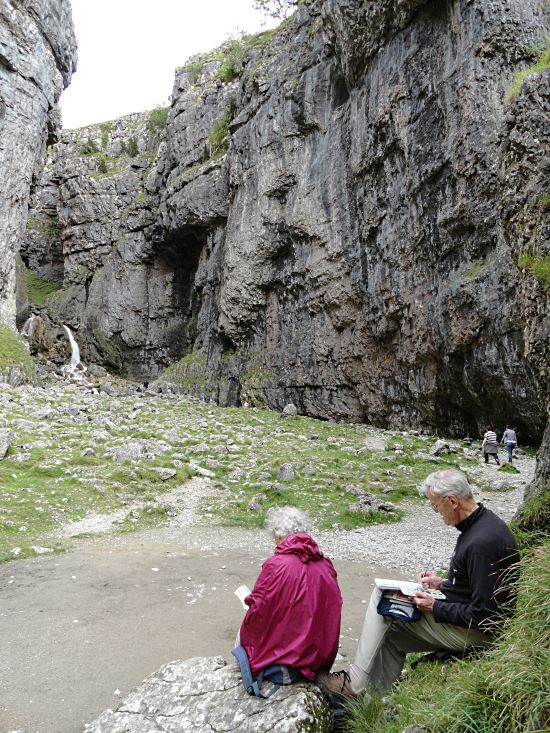 Gordale Scar (pic), a tourist attraction ever since poet Thomas Gray raved about it in 1769, is a short ride and then walk up the lane, all waterfalls and startlingly high overhanging cliffs. Wordsworth called it ‘terrific’ in his sonnet Gordale, so he was obviously more enthusiastic about it than Gray, who called it ‘dreadful’.

Yeah, I know, they didn’t mean it that way. No such misunderstandings with proto-impressionist JMW Turner’s 1808 painting of it, at least – it’s in Tate Britain – though he apparently was low on every colour except beige when he did so. 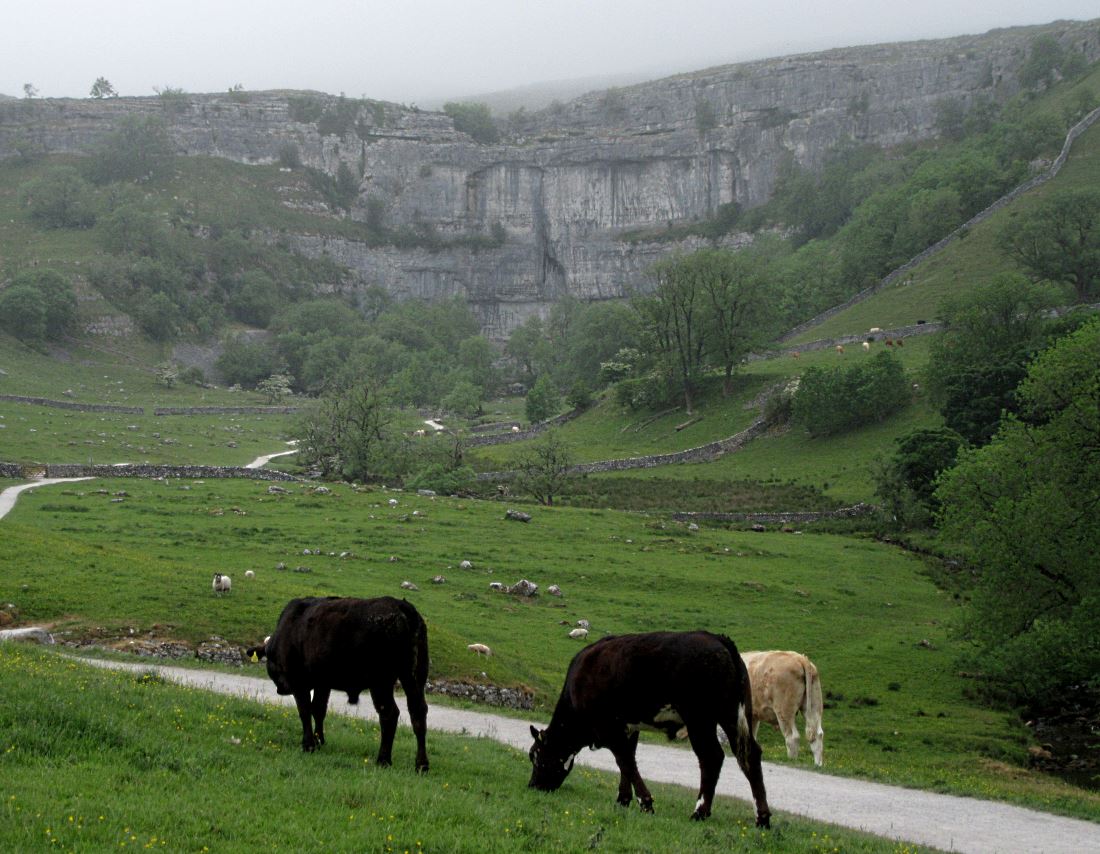 A short distance north – and what feels a long distance vertically – is the grand glacial amphitheatre of Malham Cove (pic). The cows here must have failed their meteorology exams, because they were ambling around happily instead of sitting down and forecasting the fog, sleet and rain that hit me immediately afterwards. Not quite enough rain, though, to turn the Cove into Britain’s highest waterfall, which it was on 6 Dec 2015 after Storm Desmond.. 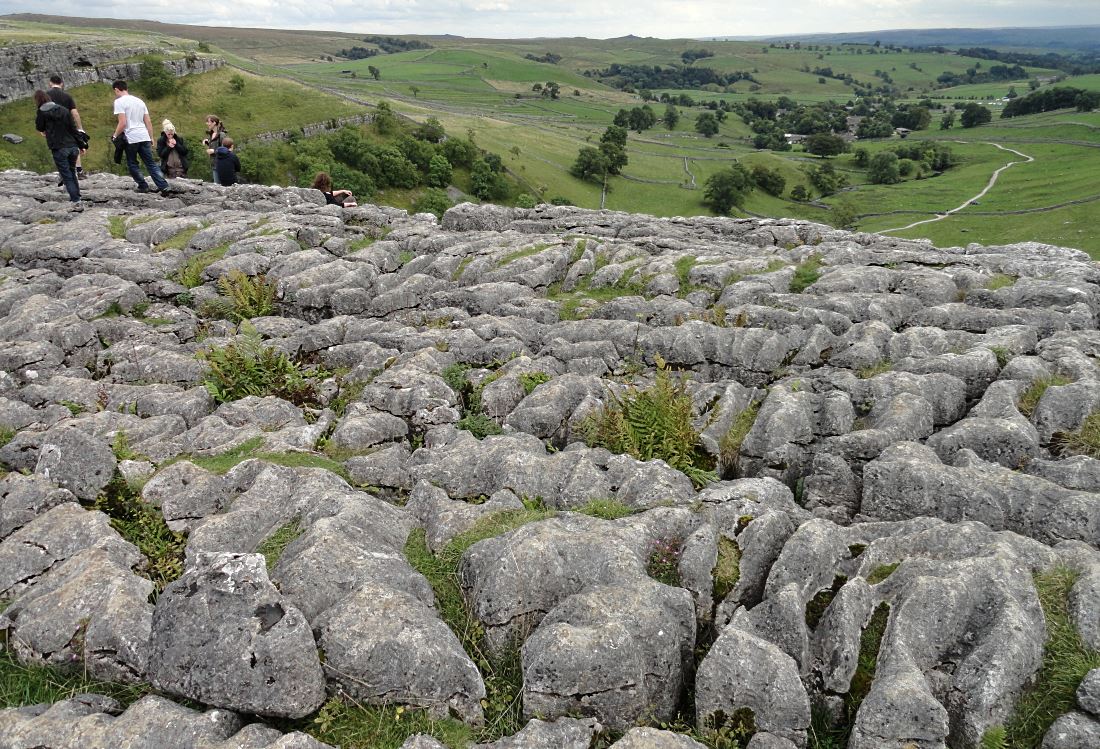 At the top of Malham Cove is this remarkable limestone pavement (pic, from a previous trip, when it wasn’t torrential rain). I can’t hear the 1975 song Rhinestone Cowboy without substituting those words for the title. All very well to sing ‘No compromisin’ / on my horizon‘, but it was too misty to see that far today. 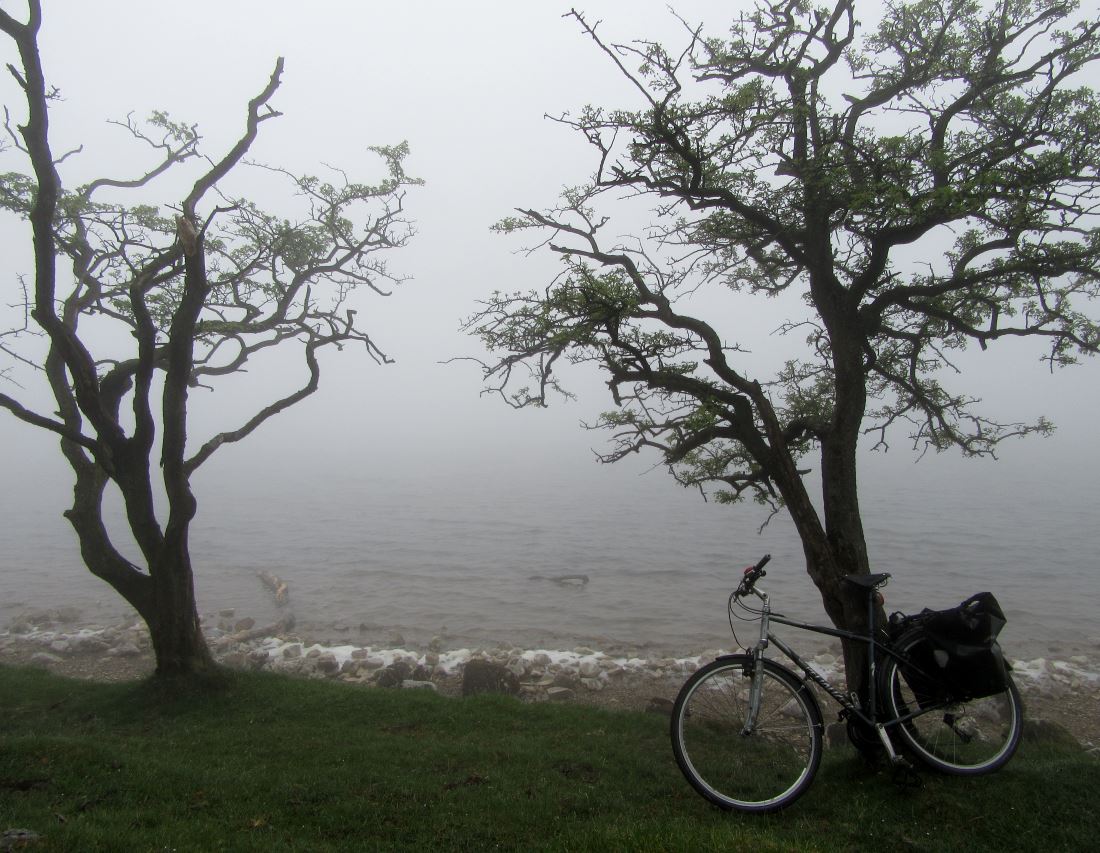 Carry on further north, up onto what feels like remotely high moorland, and you get to Malham Tarn (pic), a glacial lake that inspired Charles Kingsley to write The Water-Babies, and me to cycle round it. The visibility wasn’t great in the mist and drizzle, though the effect was quite thrilling: with the far shore invisible, it felt like I was by some vast Asiatic lake in a remote part of the world ending in ‘-stan’. 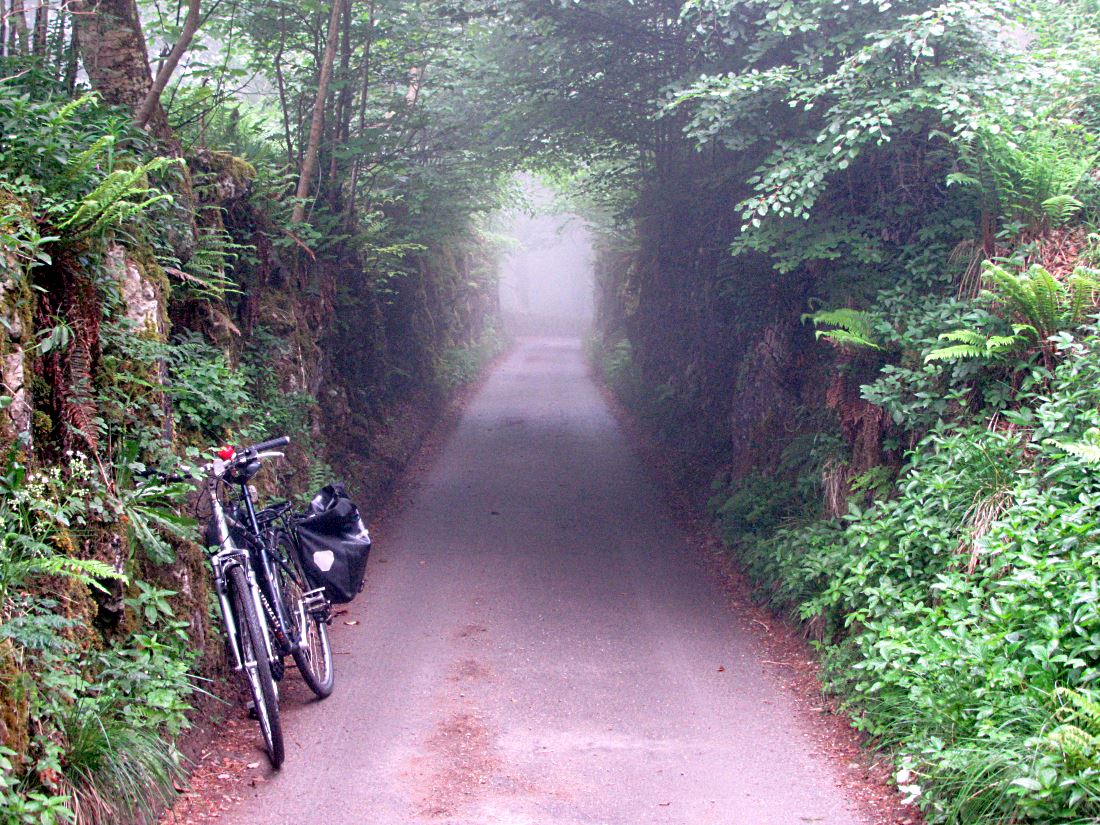 And then, this (pic): a rather magical narrow lane just to the north of the Tarn, perhaps the haunt of pixies and elves, but definitely the haunt of bored students glumly going through the motions of their Duke of Edinburgh at the field centre. 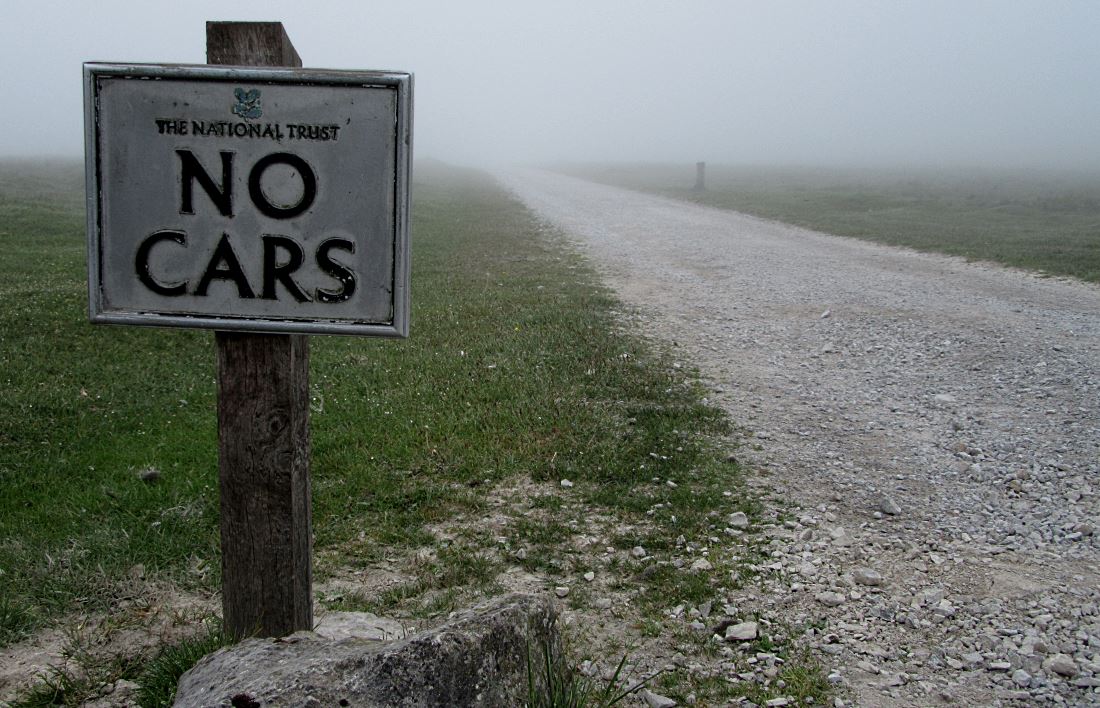 And then, this (pic): the lane down the east side of the Tarn, with one of my favourite road signs. 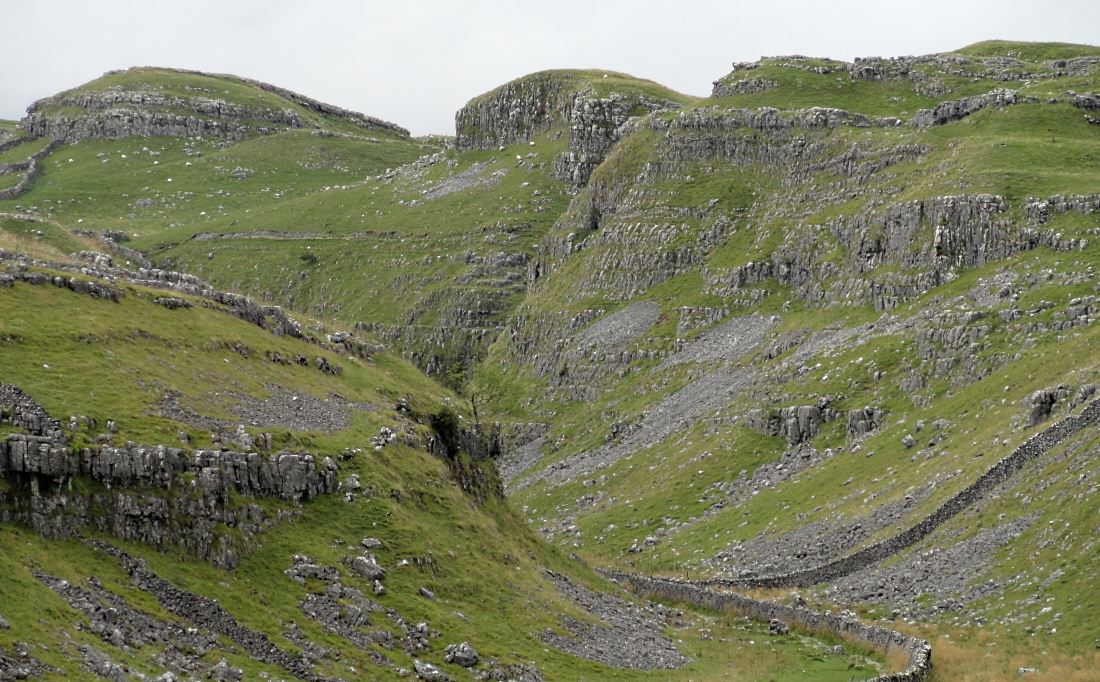 It’s all rather grand round here (pic). You might even say spectacular. But I left just as the brightly-clothed road cyclists were descending on the village for their lunch break: I had an appointment in Skipton to cadge a lift from a narrowboat piloted by my brother and well stocked with food and drink. Scenery’s all very well, but in Yorkshire we have our priorities right.