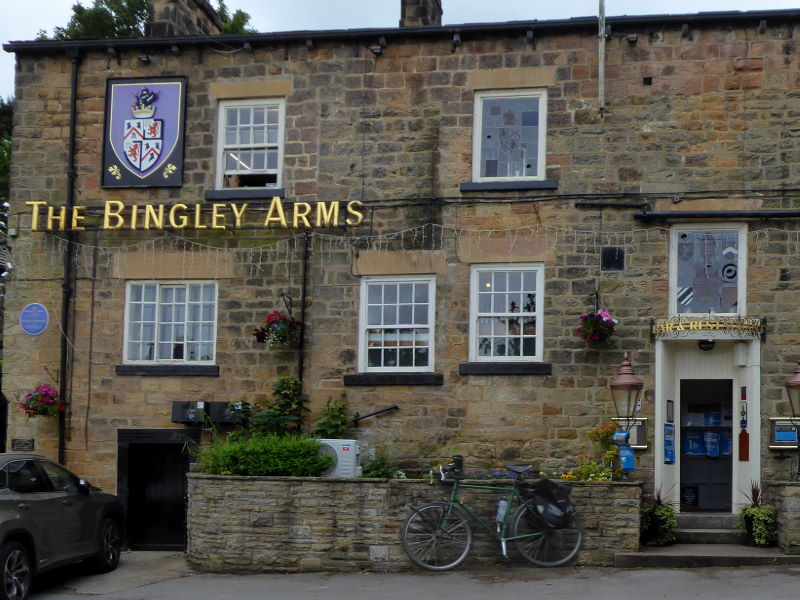 There are many claimants (this site lists 15) but the Bingley Arms in Bardsey, a pleasant village a few miles northeast of Leeds and a couple of hours ride from my house, is (according to Guinness, or perhaps not) Britain’s most ancient local. So on a sunny day, how could I resist cycling there to investigate…?

The Bingley Arms was already pulling pints in the year 905, for thirsty monks shuttling between the Abbeys of Kirkstall in Leeds and St Mary’s in York. It’s doing the same today, over 1100 years on, for thirsty cycle bloggers also travelling between the cities, albeit with smoother roads and a wider range of gears than in those monks’ most ambitious prayers.

I cycled west from York, along the noisy but smooth and separate cycle path alongside the A64, through Tadcaster, and along country lanes to Bardsey-cum-Rigton. As well as the pub, the village has some other historic buildings, such as a Norman motte’n’bailey castle, and a red phone box, now repurposed as a miniature library.

There’s not much left of the castle now, just twin mounds of earth, whereas the pub – which is more than a century older – is still going strong. As is the yew tree in its beer garden, which – for something reckoned to be over a thousand years old – is looking pretty youthful. Wish I could say the same about me.

Before being renamed in 1780 after Lord Bingley, it was the Priests Inn, and served as a refuge for Catholic clergy in Henry VIII’s purges. There are two priest holes (installed in 1539) visible today, one up inside the main bar’s inglenook fireplace. It barely looks big enough for a dog kennel, never mind a hidey hole for a grown man in a gown and big hat, but it’s larger than it seems.

In fact, at Christmas, Father Christmas – or rather, his locally-sourced stunt double – descends from the nook, with a sack full of gifts. No doubt these days children can track the delivery of their expected parcel via an app.

The other priest hole, upstairs, is evident from a narrow window and a Buddha statue in the bricked-up ledge that used to be its entrance. The figure was put there in its recent history as a Thai restaurant to keep away evil spirits, but with debatable efficacy: locals claim to see ghosts regularly.

As the pub’s handy information leaflet puts it, ‘Objects have moved or disappeared, pans of water have boiled on stoves which weren’t on and candles have been known to light on their own… A Cavalier, known as a practical joker… has been seen by staff dressed in fine clothes with a large hat. A young Girl is said to have been responsible for strange activity and a mysterious Dog has been seen walking around by visitors!’

It sounds like a lot of things get blamed on the ghosts. My two pints of Ossett Yorkshire Blonde certainly disappeared with mysterious speed. Though of course the task is made easier in these days of enforced table service, because you always get served a bit less than a pint.

Most of the pub is ‘modern’ – in other words, 17th century or later – but there are lots of intriguing historical details. In the spidery old basement, as the amiable and helpful Karen from the pub kindly showed me, is a tunnel leading off to the church, presumably once vital for furtive clerics.

There’s also a full suit of armour on display, which I presume doesn’t have anyone inside it. Another telling period feature is the historically accurate lack of any cycle parking.

And in the tap room, another inglenook fireplace, rediscovered in recent building works (by ‘recently’ we mean the 1700s) has a fully functioning period Dutch oven, still used for baking bread.

From here I took a few back lanes to Weeton station and the train back home, via the grounds of Harewood House – aka the home of TV soap Emmerdale – which I describe in a separate post.

It gave me quite a thrill, as I sat sipping my ale, to think that I was part of a long history of meditative travellers enjoying a refreshment stop here. Here’s to the next thousand years.

Maybe by that time the promised replacement rear cassette for my bike will have finally arrived from the Far East.