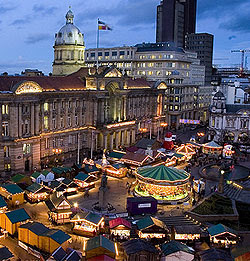 German Christmas Markets seem to be everywhere these days. We’ve been visiting a few – Leeds, Sheffield, York, Birmingham – in the echt German way.

That is, on bikes, and not spending more than we can afford.

Which means not spending anything, when they want four quid for a sausage. 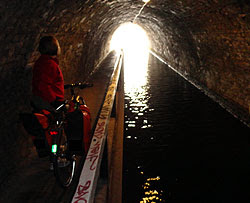 The Birmingham trip was an excuse to cycle the canal network, with its exciting tunnels (right) and quaint bridges. 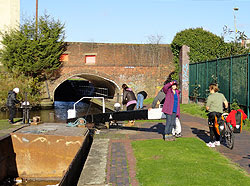 So the handwritten warnings on the scruffy underpasses and abandoned-factory walls imply, anyway.

I had no idea Birmingham was so liberal these days. First it’s latte cafes in Gas St Basin, next it’ll be naked saunas in Selly Oak. Now that would be authentic German. 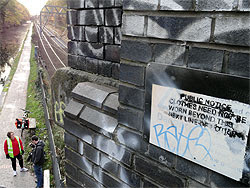 Obviously we didn’t, out of consideration for the camera-toting trainspotter in the picture (right) awaiting the flypast of a goods train from Immingham.

Canals apart, Birmingham is a horrible city centre to cycle in, with fast heavy traffic ripping along the dual carriageways, and virtually non-existent provision for cyclists.

The odd Sustrans route, such as NCN5 which passes through the Rea ‘Valley’ and a park by Edgbaston cricket ground, can’t really make up for it.

German visitors might at least politely recognise some elements of the Christmas Market; I doubt they’d be as complimentary about the cycle facilities.