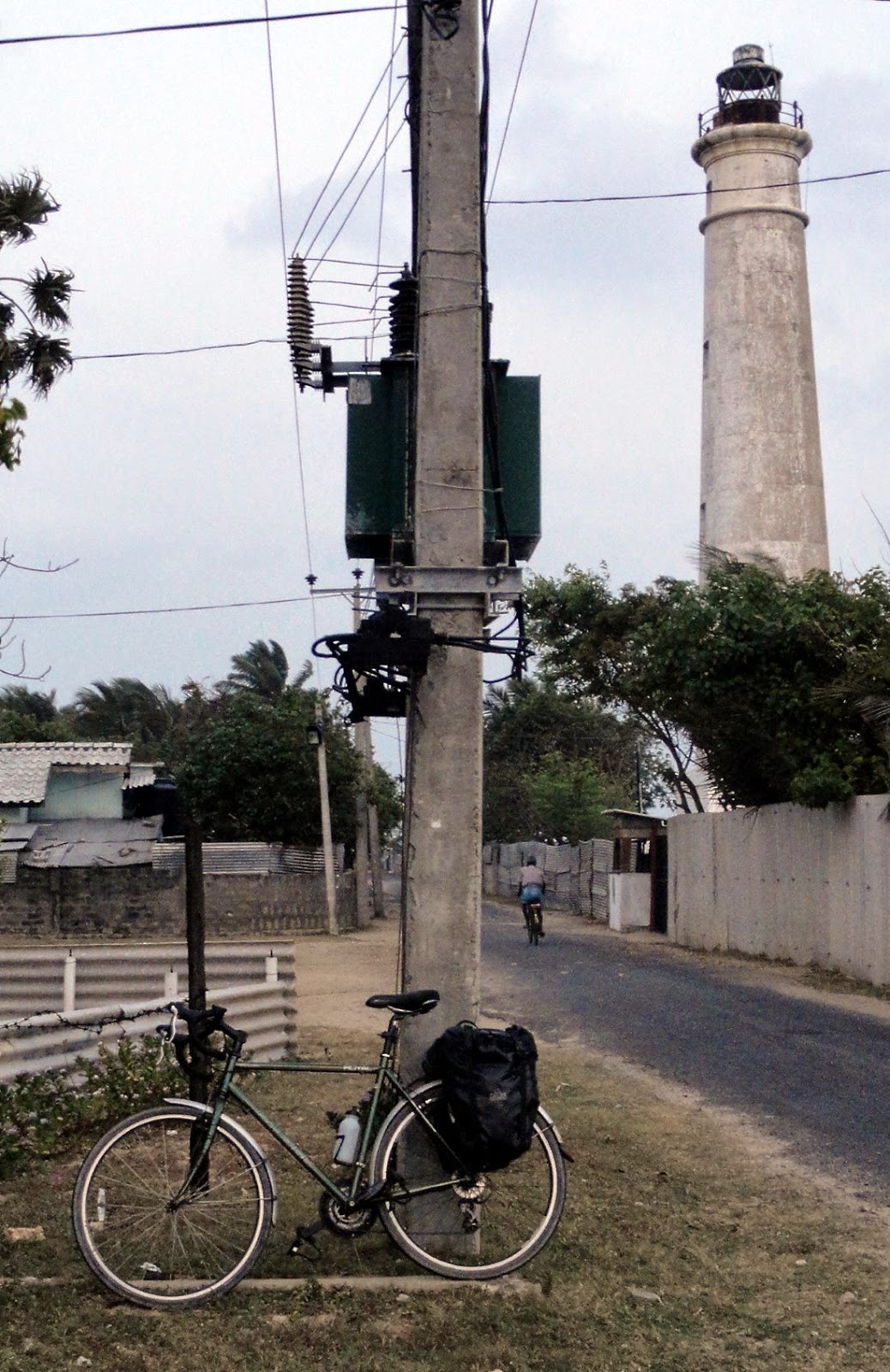 First I had to visit Point Pedro lighthouse to complement my ceremonial start back at Dondra Head lighthouse. Unlike that one, it’s cordoned off and watched over by a (very friendly, actually) guard.

Photographs are not allowed (pic).

Point Pedro itself is marked in traditional extreme-point fashion with a signpost (Madagascar 4760km, Thailand 2349km etc), plus a tableau-map (pic). A small quay juts out with, presumably, the most extreme point. A group of young guys were there having motored up from Kandy, taking pictures and having a great laugh, and we had a very pleasant chat. 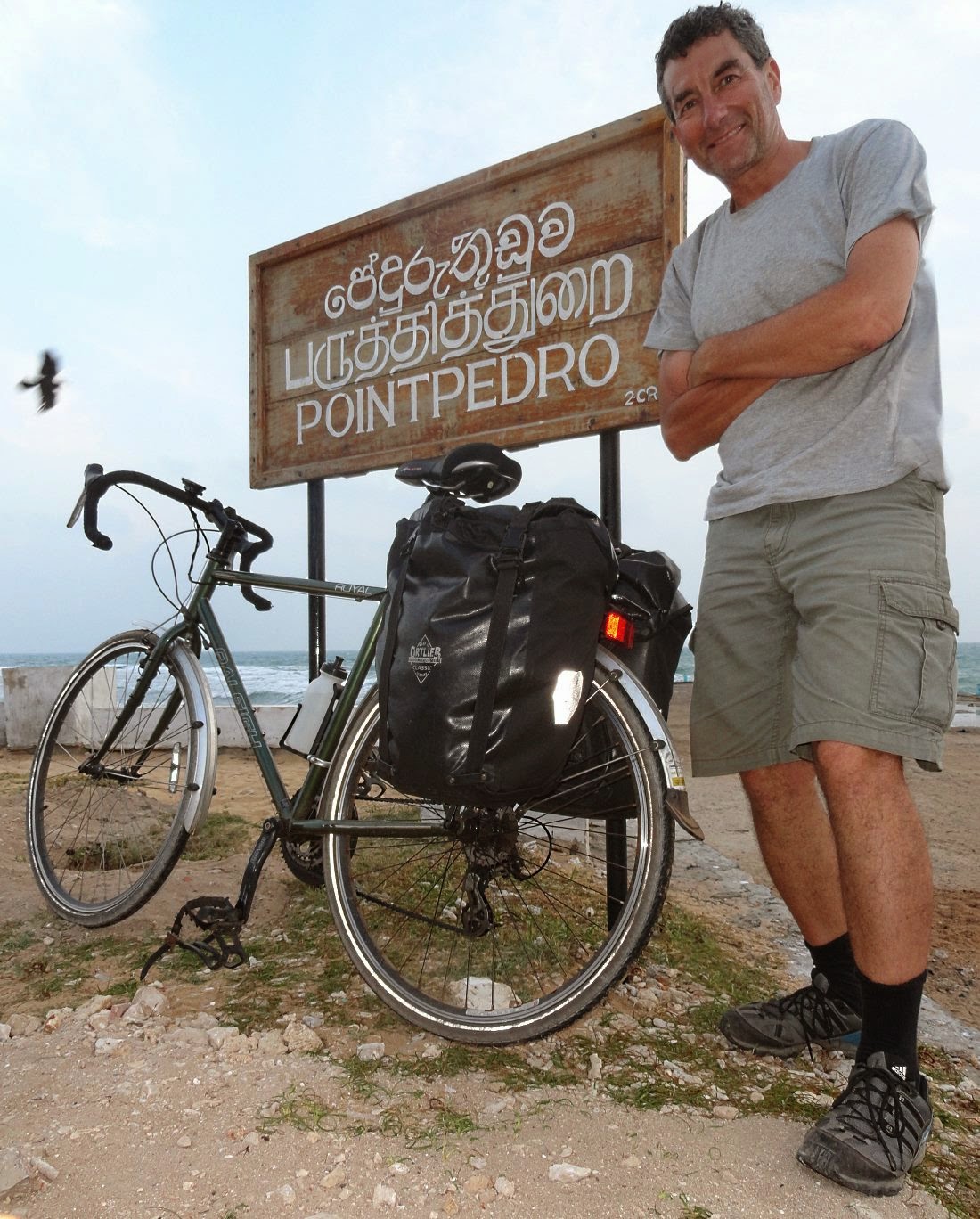 Anyway, here’s the publicity shot: me with bike at Point Pedro (pic). The End to End aspect of this particular trip is done: 470 miles from south to north, an (almost all) delightful and trouble-free ride through a fascinating, friendly country. But a cyclist is never finished, as anyone knows who’s heard one in a pub talking about rubbish local facilities. There was more biking to be done… 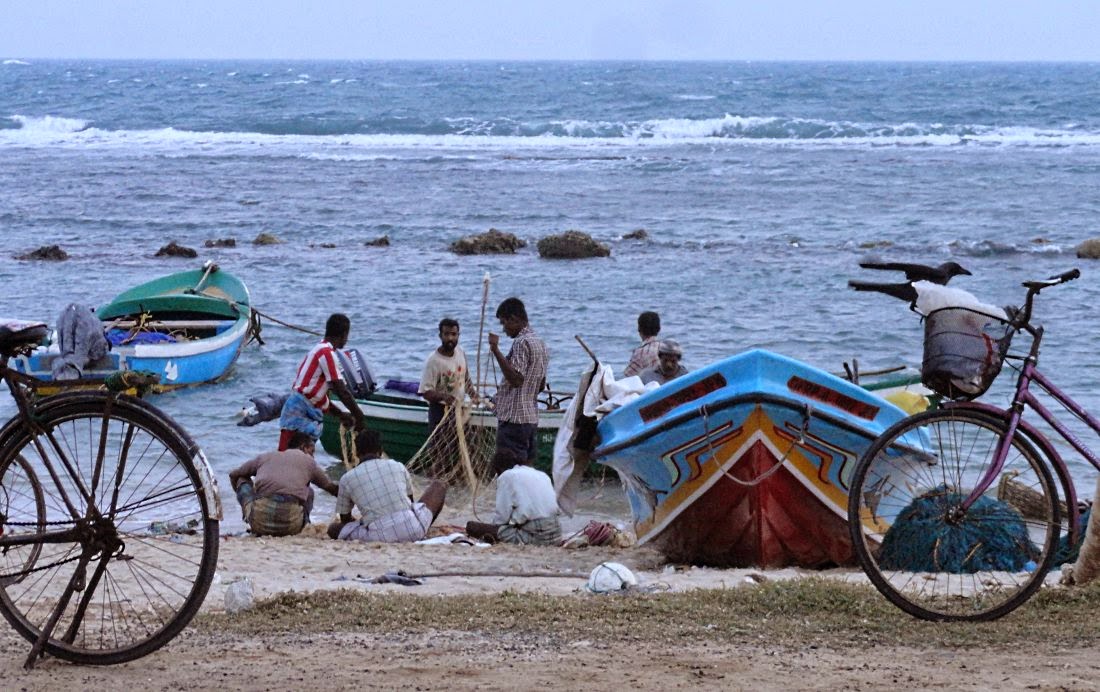 It was still only half seven, and the beaches were full of fishing boats returning with their catch (pic). They were also full of bikes, the standard mode of transport round here. For £62.50 from one Jaffna’s many cycle shops, a shiny new Lumala town model (28 inch wheels, rod brakes, single speed, weight approx. three tons, indestructible) is all yours. I’d be tempted to buy one and take it back with me, bar the fact that the excess baggage would outstrip the cost of the flight. 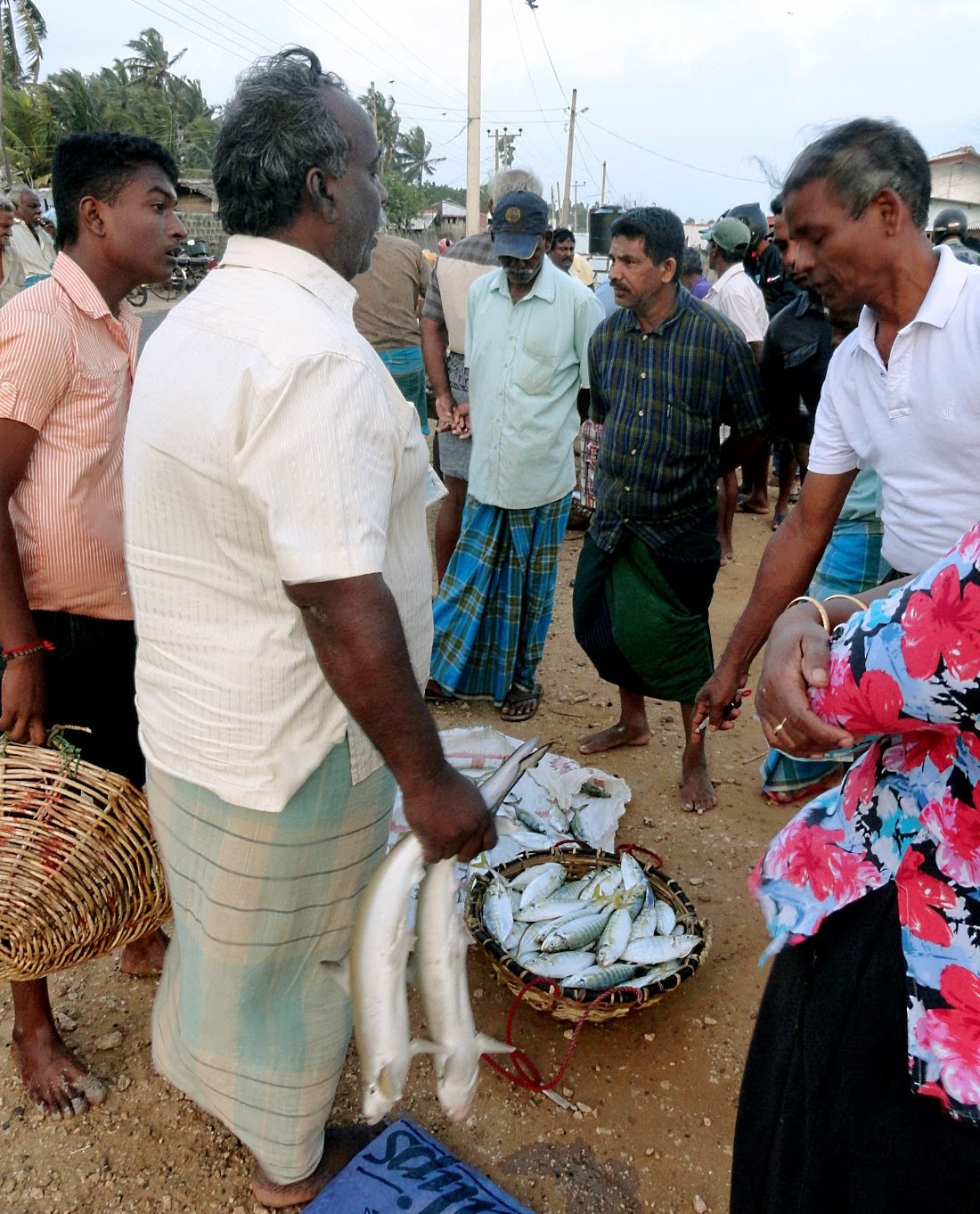 There are also fish markets along the coast, selling the catch straight off the boat (pic). In a hot climate like this, speed is of the essence. 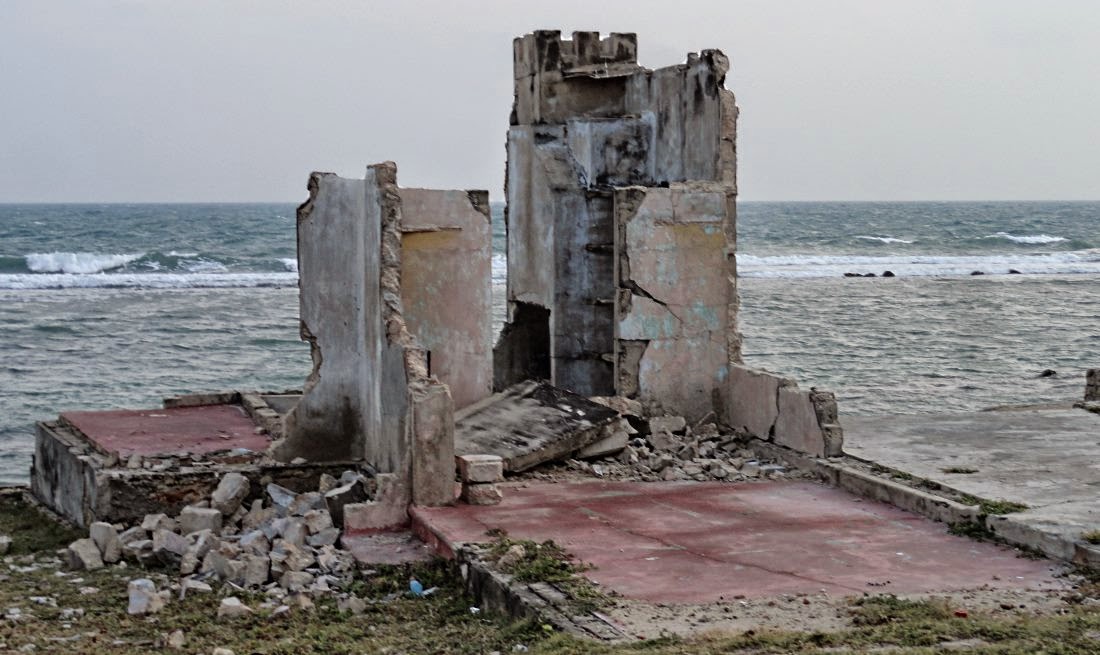 The area has suffered a lot recently. Not only was it ravaged by civil war for a generation until 2009, but the 2004 tsunami caused widespread destruction. It was very sobering to see ruins of houses such as this up and down the coast. 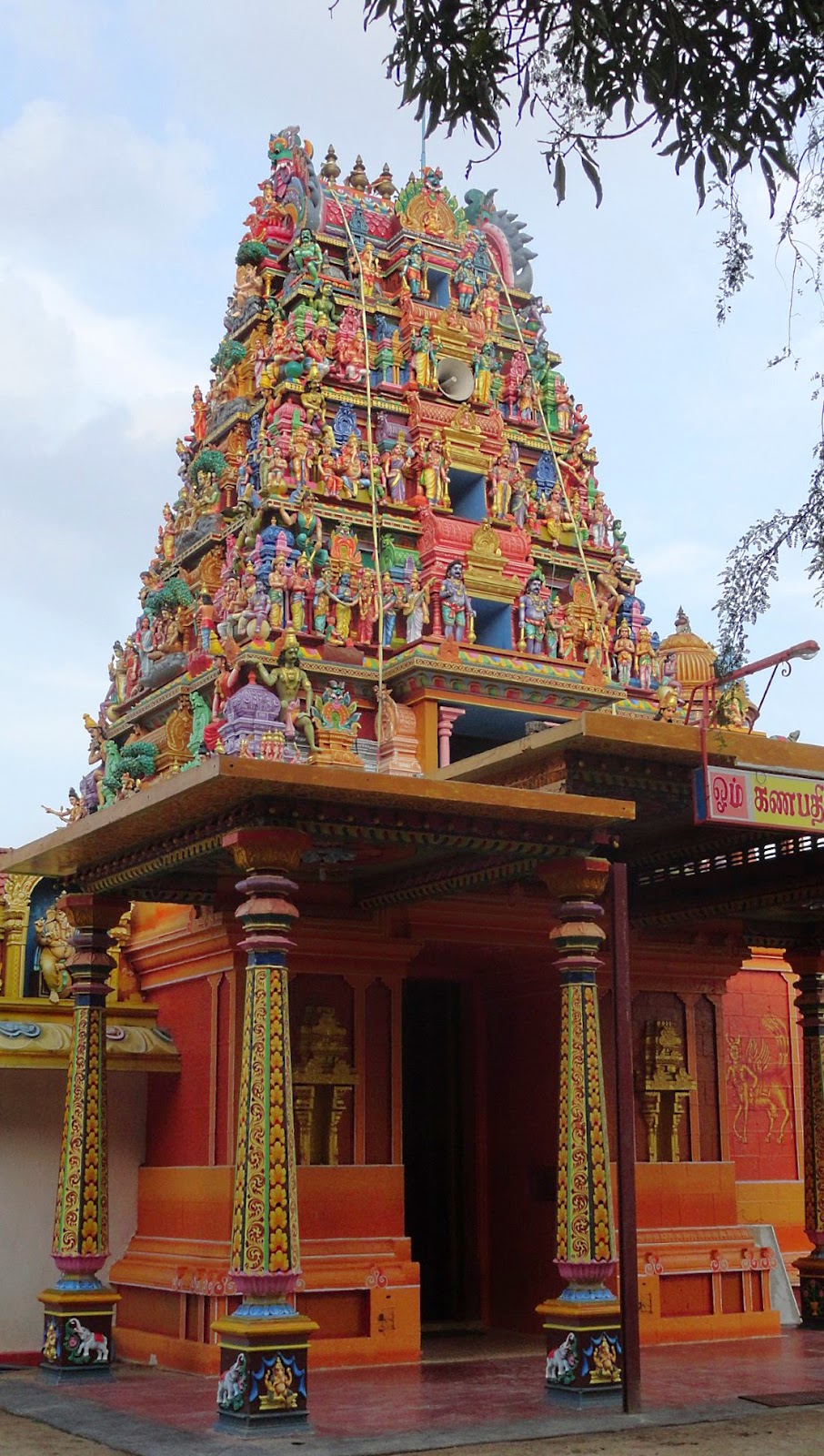 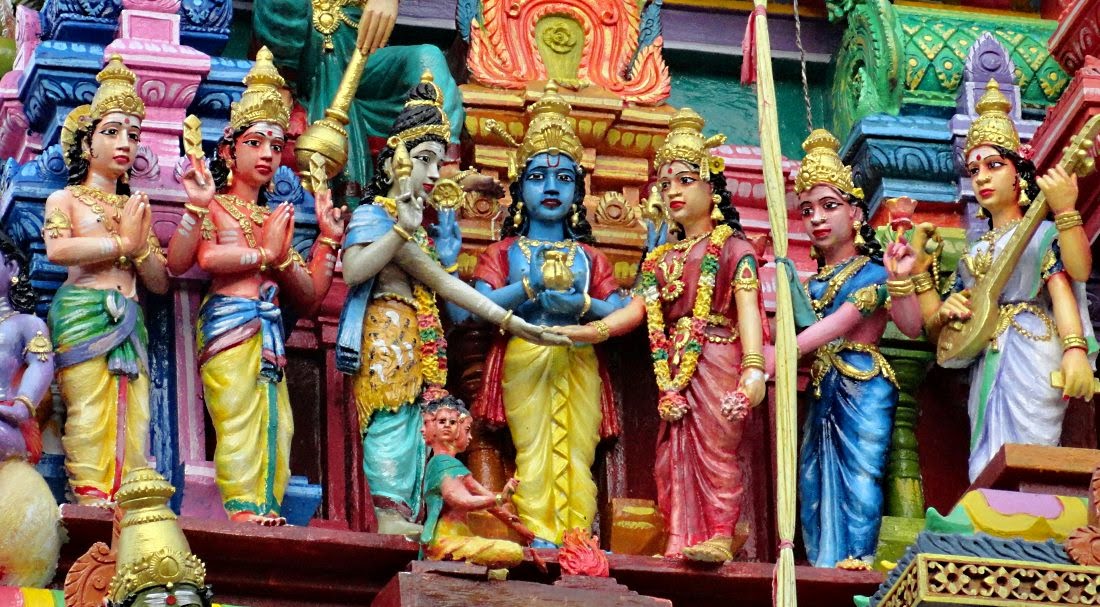 …with towers exuberantly colourful and detailed, extravagantly decorated with images of the Hindu gods (pic). I wonder which one I should pray to in order to clear up my gippy tummy? Dhanvantari, the god of Ayurvedic medicine, I expect. 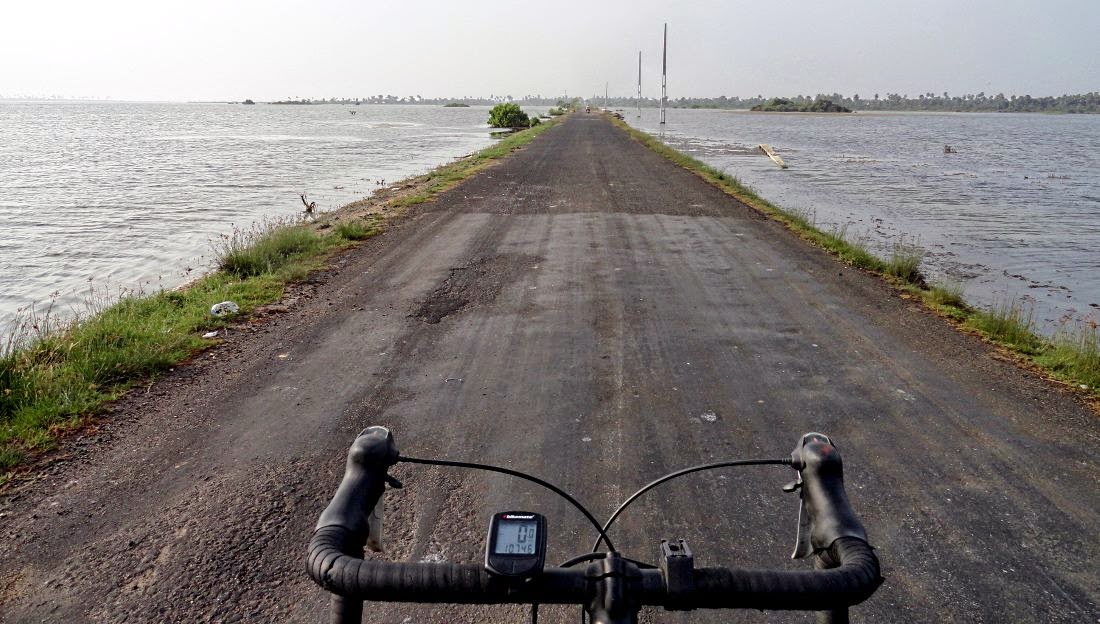 After that beautiful coast road, I headed inland through little villages and across causeways over the much-lagooned landscape (pic) to Jaffna. Direction signs are virtually non-existent on Sri Lankan roads, so it meant a lot of asking locals the way. Reassuringly, they always agreed with each other. Sri Lanka is a different country from India, you know. 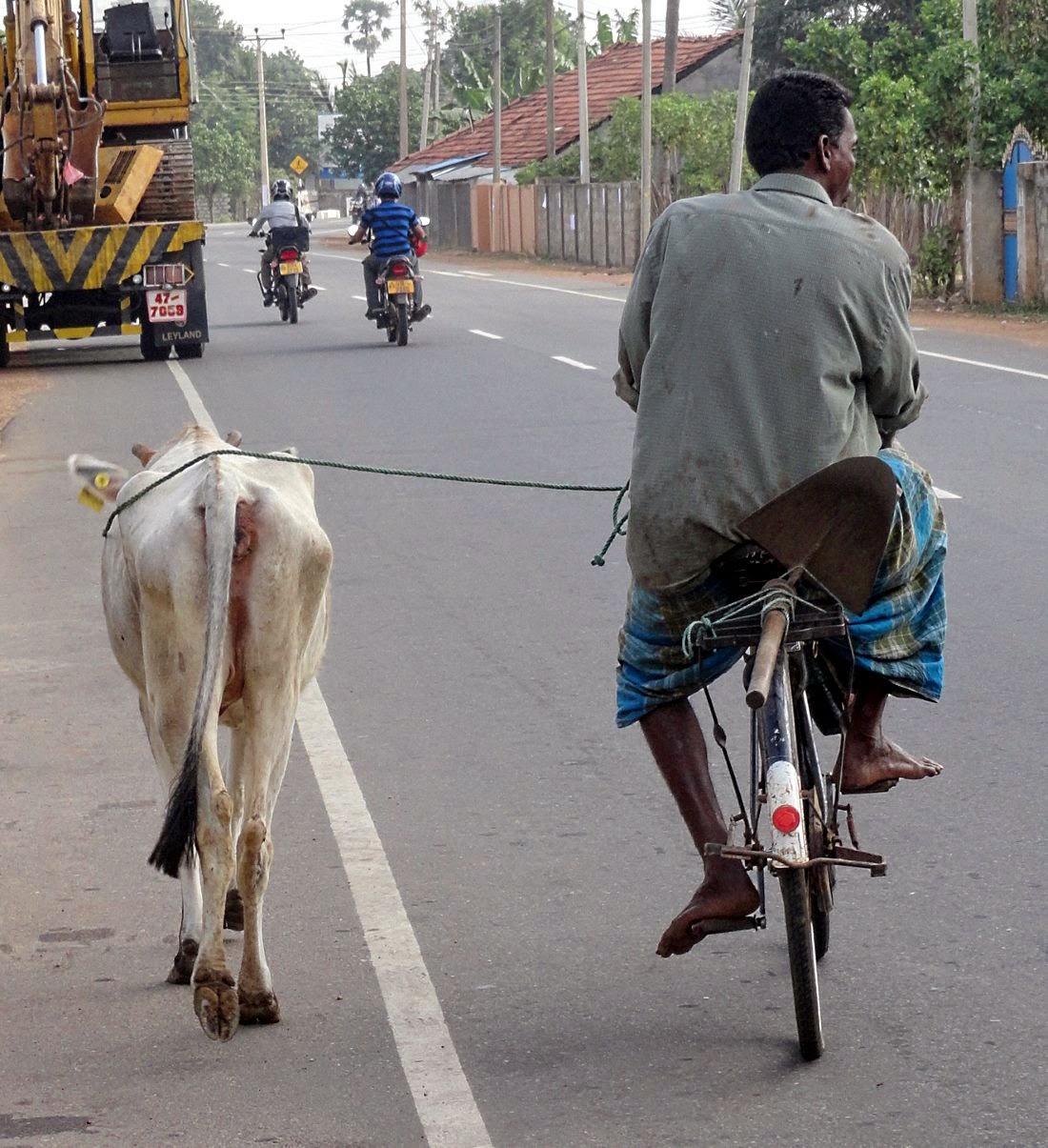 Finally, as I came into Jaffna, I saw this man on a bike taking his cow for a walk. As you do.