[This was my second go at riding from Barmouth to Yarmouth. My previous attempt, in August 2010, was aborted when rain stopped play at Shrewsbury.] 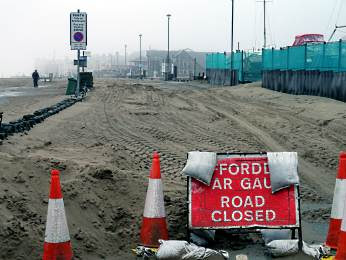 So here we go again. After four changes of train from York, I rolled into Barmouth at noon today.

The weather wasn’t promising: low cloud meant nothing was visible, not even the cloud, and recent storms had blown sand over everything.

The council have given up trying to clear it until March, I was told in the convivial Last Inn, which has its own internal wishing well.

I used to wish for fame and fortune. Now I just wish for a new bike. Worth a 2p punt, I suppose. 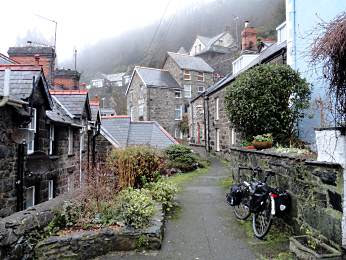 Still, I poked around the picturesque back lanes that clamber up the hillside, and didn’t get too wet. 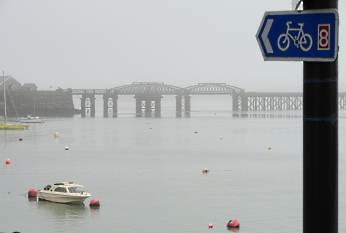 Then I rode across the famous Barmouth Bridge, aka Britain’s biggest cyclable marimba. 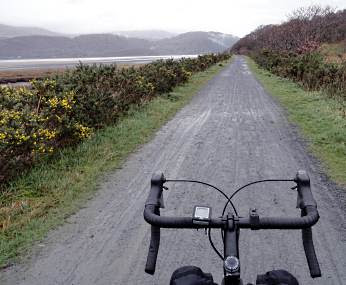 The Mawddach Trail runs east along the estuary to Dolgellau. Last time I did it it was the Mawddach Monsoon and I didn’t see a thing.

This time the cloud lifted just enough to enjoy the scenery. It was all rather wonderful.

John Ruskin is quoted in the info panels along the trails as saying there was no better walk “in the world” than Barmouth to Dolgellau, except for Dolgellau to Barmouth.

Which proves either that Ruskin should have got out more, or that the info panel people have bigged his quote up somewhat. 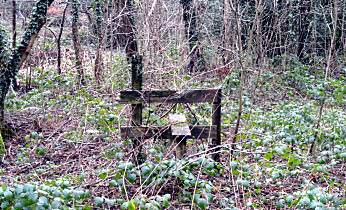 There was this stile just outside Dolgellau. It doesn’t look especially helpful to me. Maybe TfL installed it.