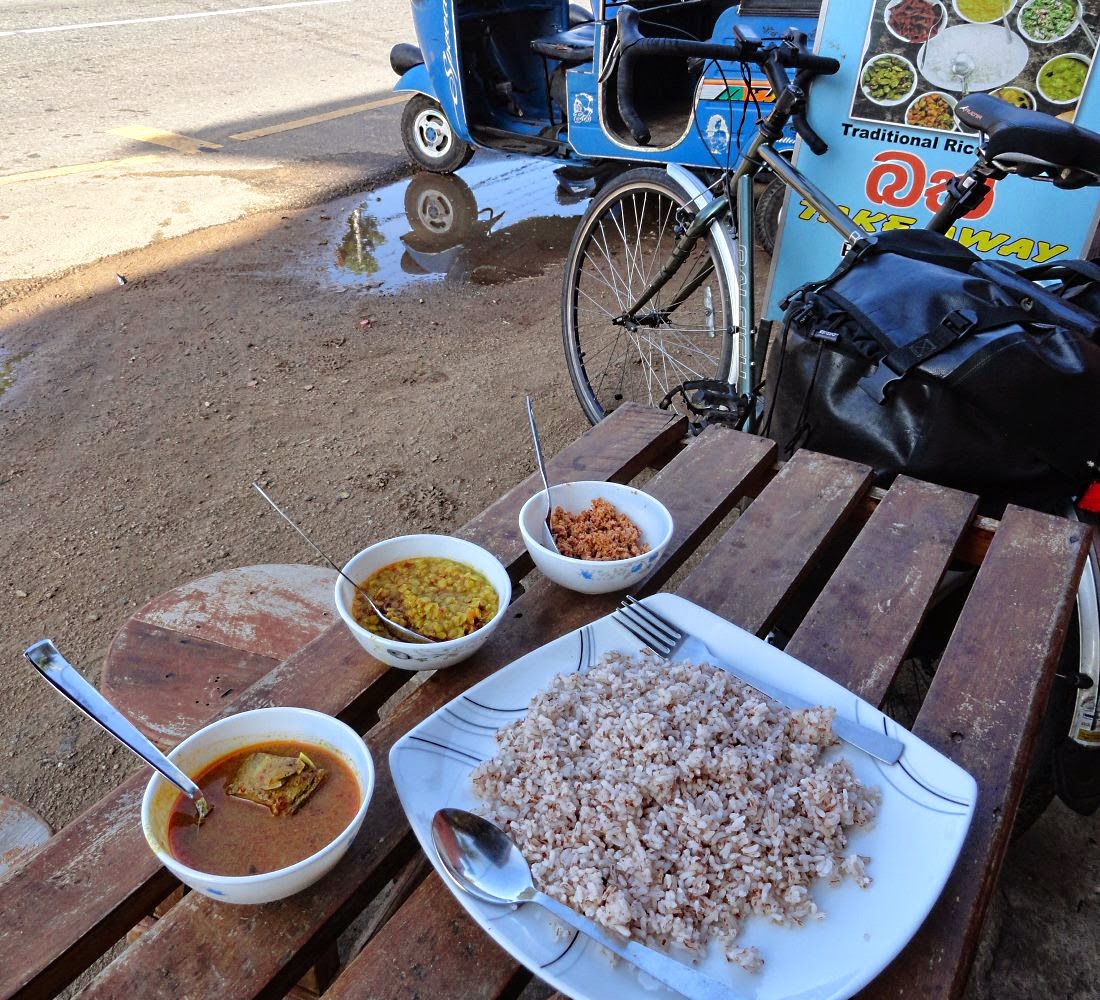 At last I got cycling today, starting from Galle at 6am with only the sound of birdsong, and of my rattling mudguard that was trashed by Etihad’s baggage handlers. I followed the A2 south, stopping off for a typical Sri Lankan breakfast en route (pic): rice; fish curry; dhal; and something evidently consisting of coconut, chillis, and nitric acid. It was brilliant. And all for 250 rupees (£1.25). 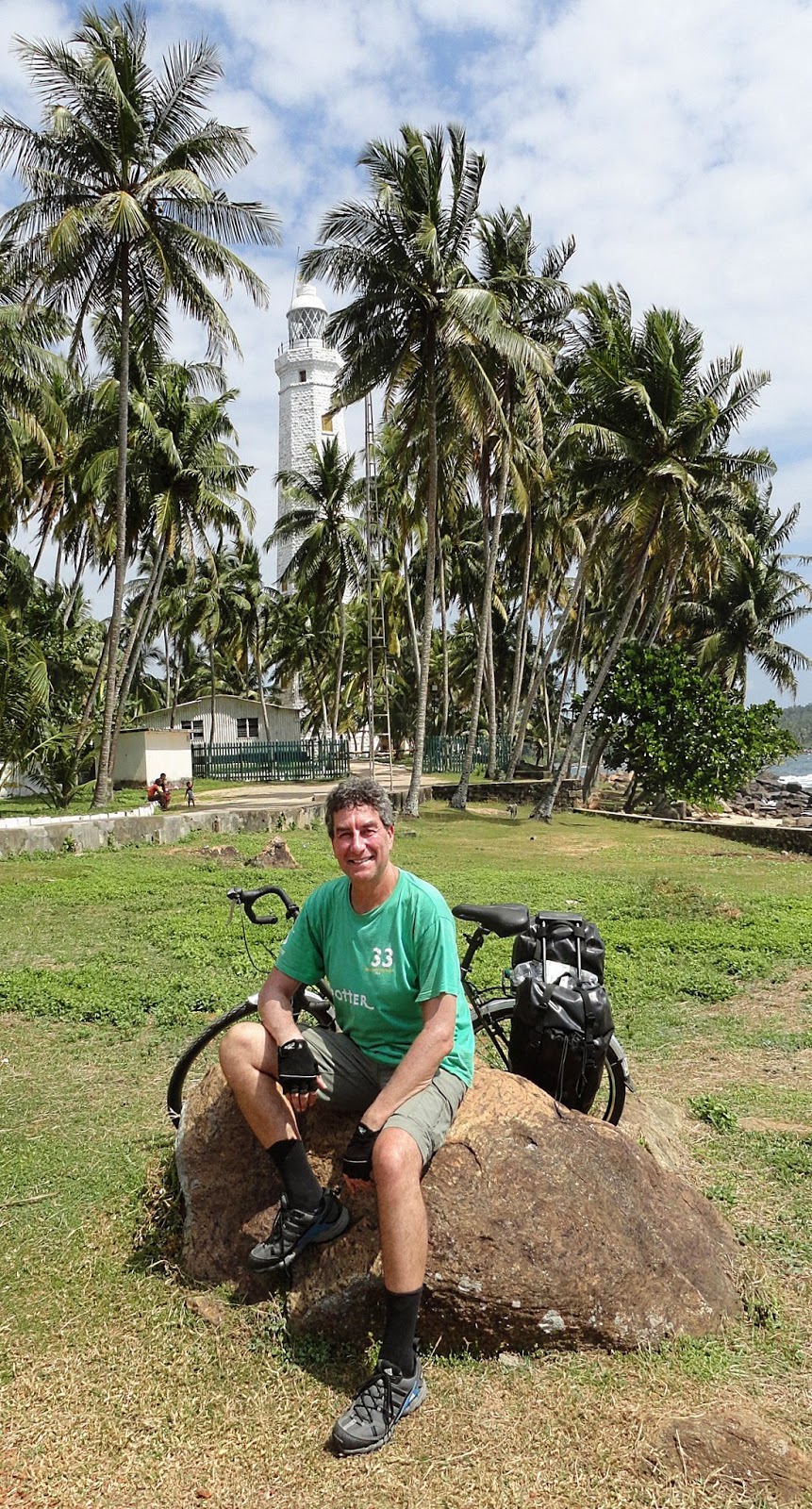 Thirty-odd miles of lovely, flat, waterside cycling later I was at Dondra Head, Sri Lanka’s southernmost point, marked by a lighthouse. This is where the End to End starts in earnest. Here’s a picture of me, partly by popular request, partly to prove I actually went there, and didn’t just snaffle an image off Flickr.

You can climb to the top of the lighthouse for spectacular views of the Head itself, and the island’s vibrant green interior (pic). All the kids outside were trying to cadge a cigarette off me. Perhaps this is what they always do to tourists in this touristy spot. Or perhaps my wheezing and puffing, after all those stairs, made them think I was a smoker. 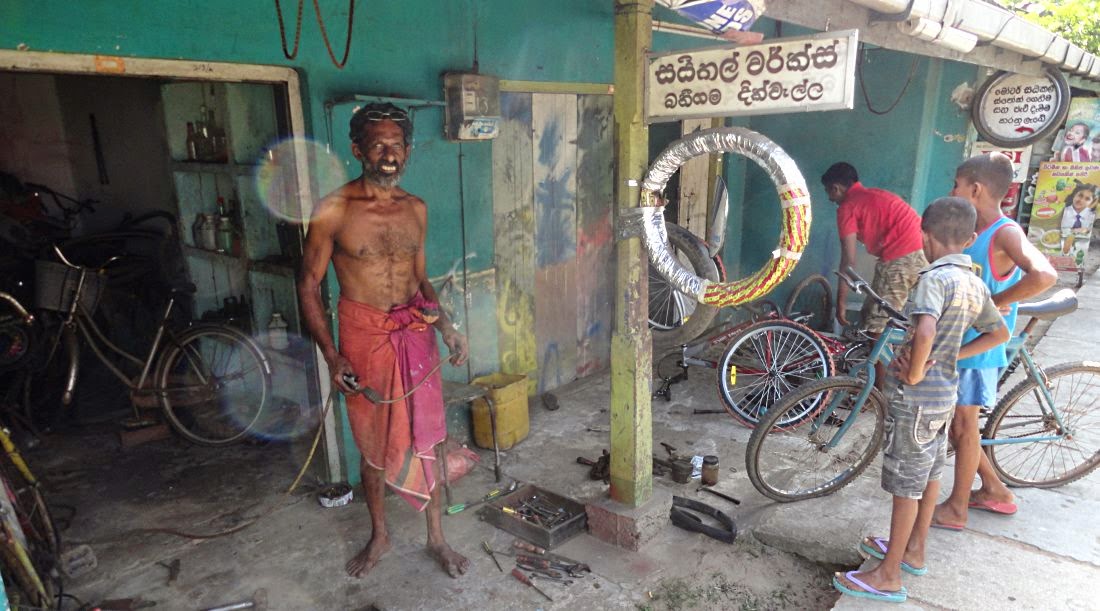 I passed a local bike shop not long after (pic). All the kids inside were trying to cadge a cigarette off me. Perhaps this is what they always do to tourists in this non-touristy spot. Or perhaps my wheezing and puffing, after cycling into a brisk headwind, made them think I was a smoker. 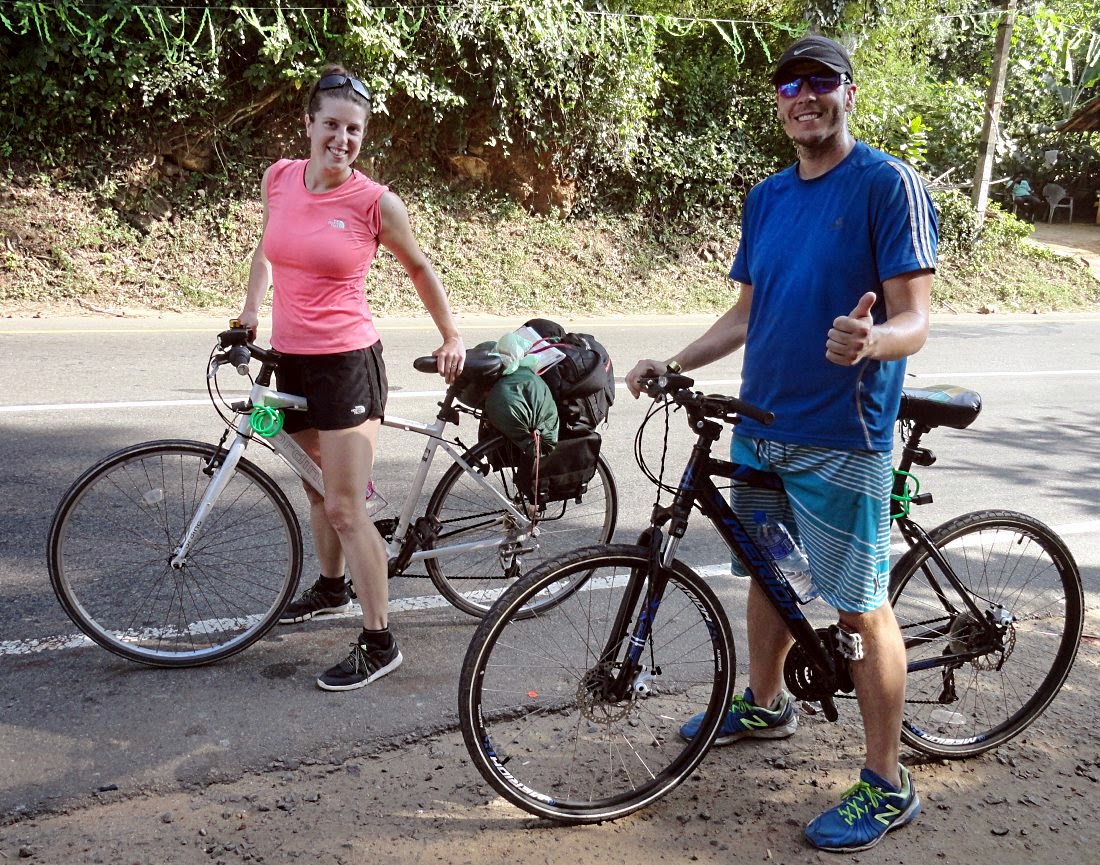 Cycle-tourists are very few, but I saw two touring couples today. Dominique and Vivianne from Canada (pic) are cycle-camping round the island, with rather less luggage than I could manage. 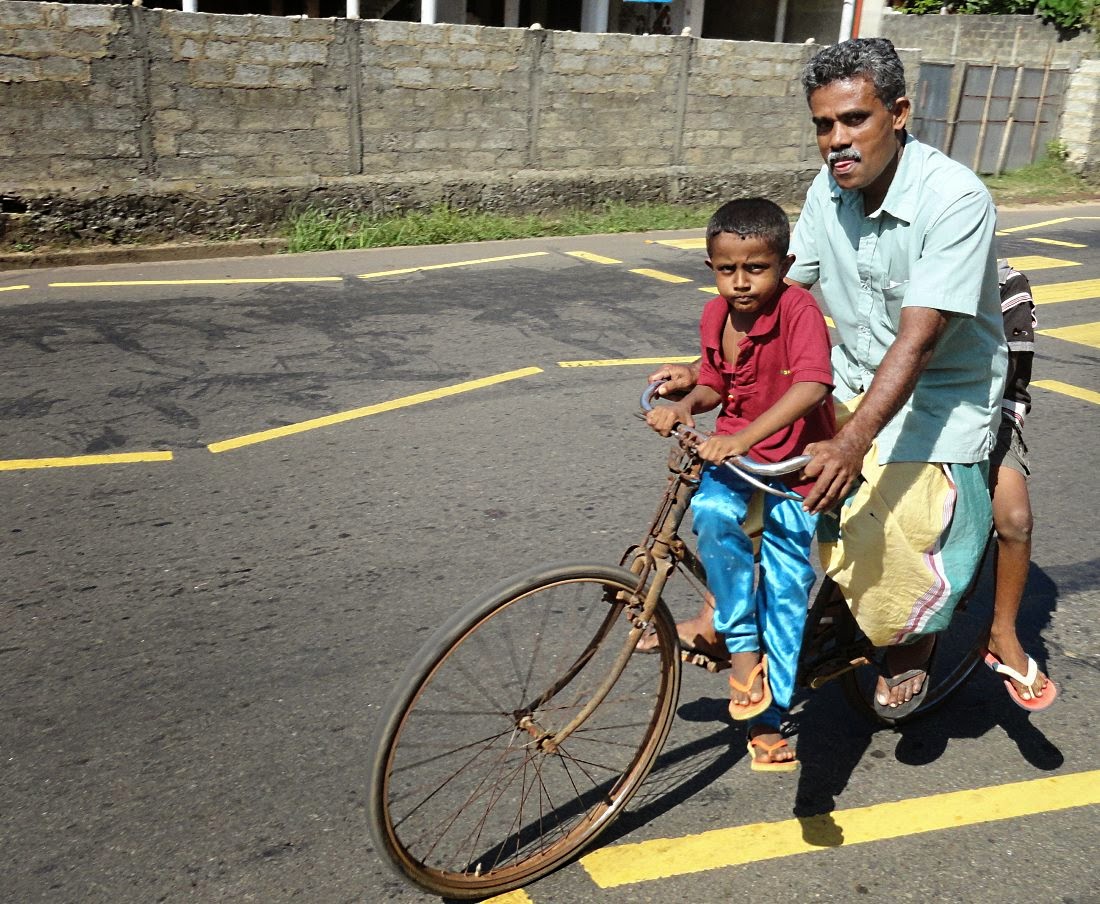 There are plenty of local cyclists on the roads, though, usually chugging along on clunky, rusted old single-speed jobs. Sometimes they are ferrying cargo (jumbo boxes of fish or fruit are a favourite), other times various family members (pic). 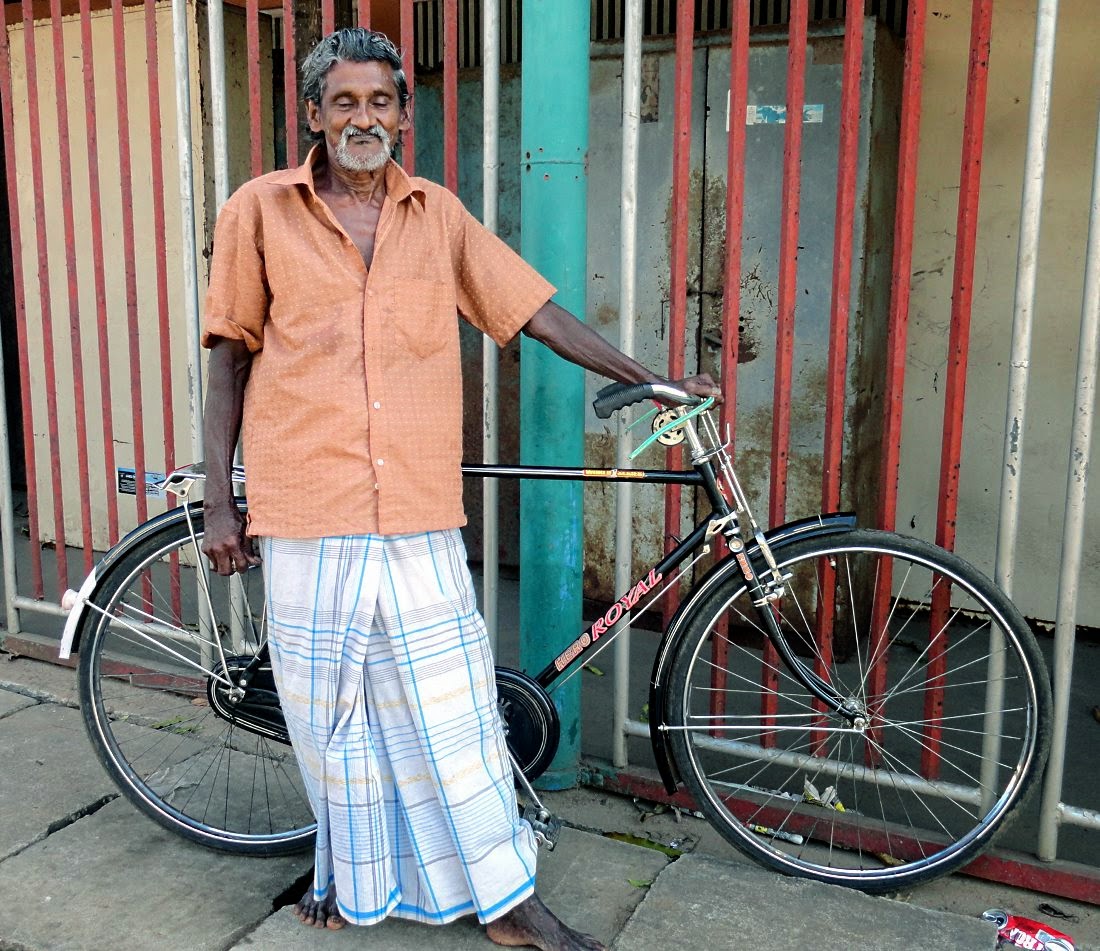 One of the most common bike brands you see is the basic and robust (ie built like a tank, and handles like one, but infinitely repairable) Indian-made Hero. I couldn’t resist snapping this bloke who was very proud of his newish model. 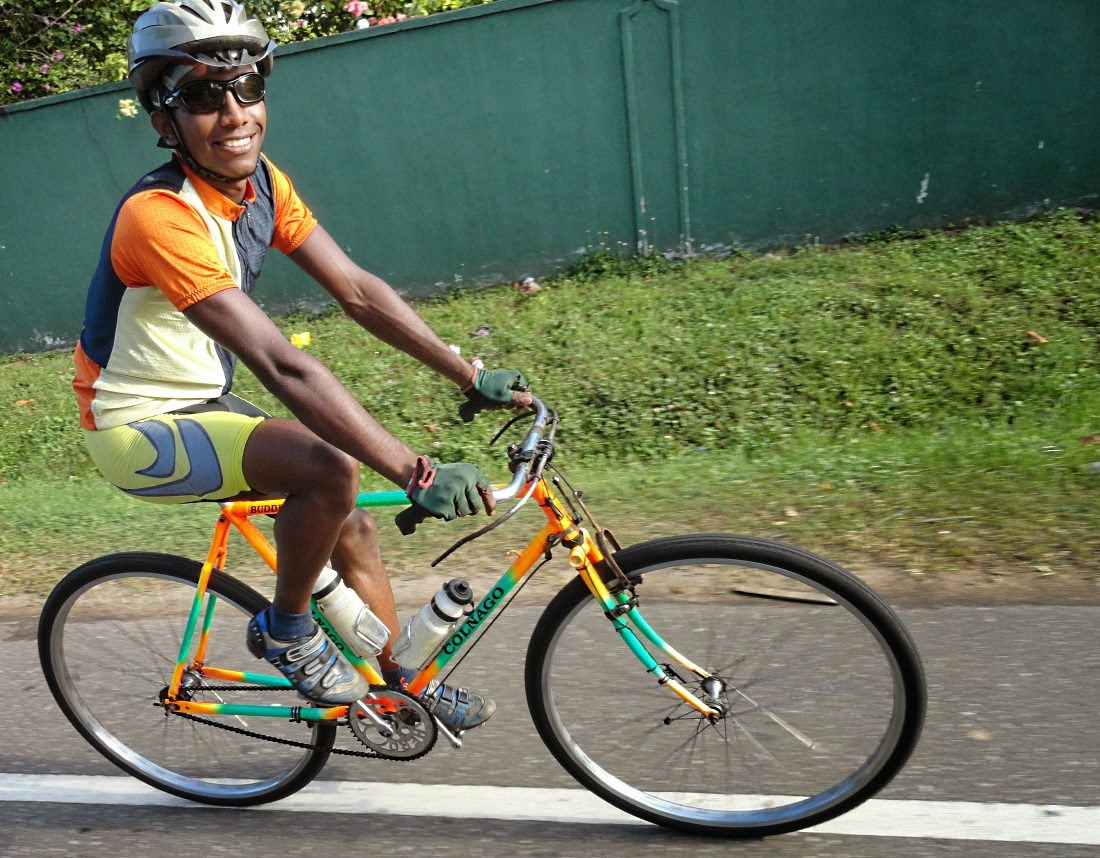 Lycra is rare, but there was the odd road cyclist out. This chap (pic), like the entire population of Sri Lanka, was friendly and curious and wanted to know where I was going and whether I was married and whether I thought Kumar Sangakkara or Sanath Jayasuriya was the greatest batsman. 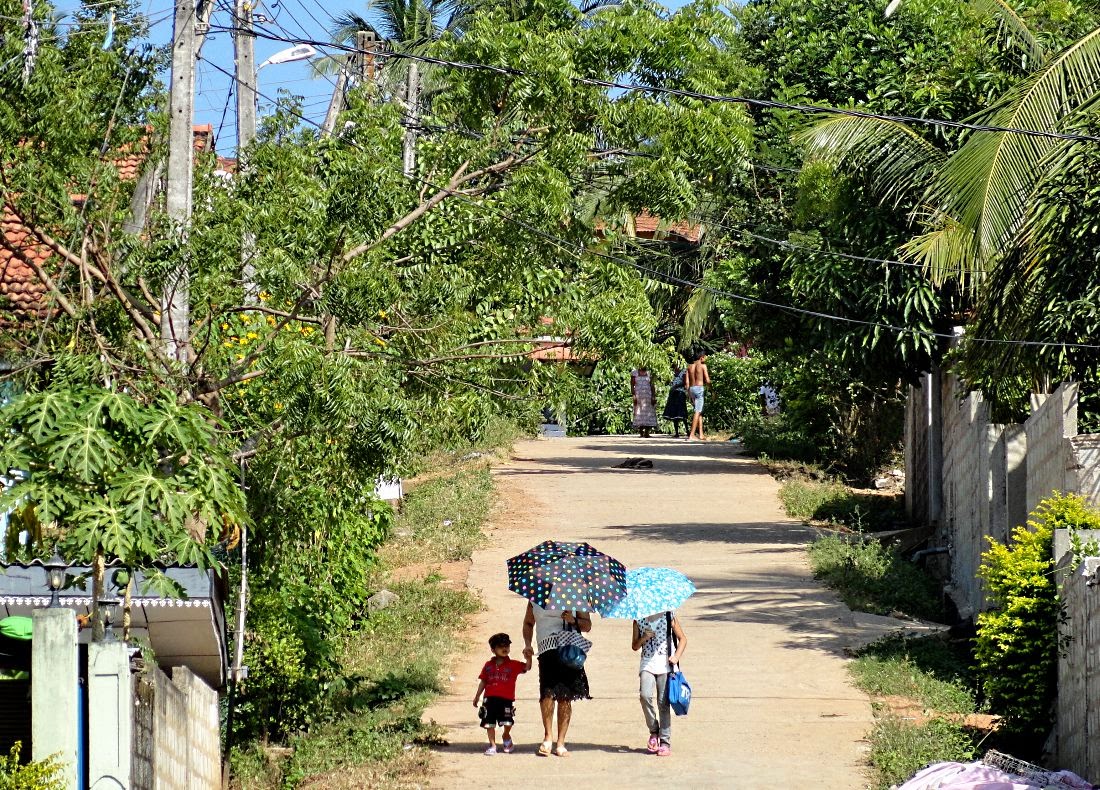 As it happened, later on I saw a sign pointing to ‘Sanath Jayasuriyagama’ (‘gama’ means ‘village’). It’s one of two villages set up by cricketers (the other being Mavan Atapattu) that provided homes for 100 families whose houses were destroyed in the 2004 tsunami. Having a bike meant I could detour to visit the village (pic), whose streets are all named after cricketers. 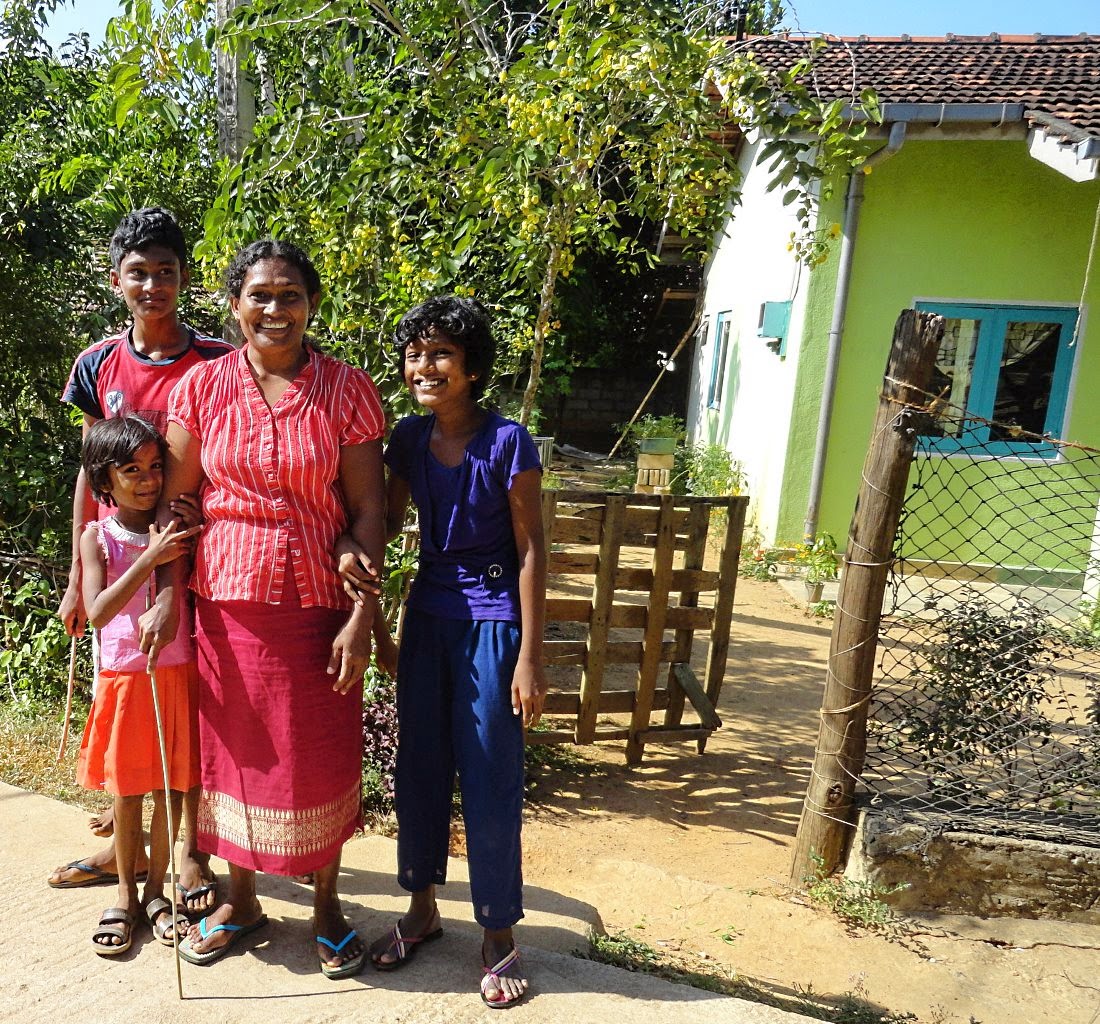 Sri Lankans are a friendly, smiley people, and keep waving to me and saying hello as I pass them on the road. This lovely family in Sanath Jayasuriyagama (who must have lost their house in the tsunami) were no exception. The children were gigglingly delighted to ask me questions about my trip, and they asked me in for coffee. There was no question in their mind who was Sri Lanka’s greatest batsman.

In the evening, outside my beachfront hostel in Tangalla, there was an informal cricket match going on with a tennis ball and a chair for the wicket between some Australian backpackers and Sri Lankan locals. I was corralled into batting for the Australians. I wasn’t as good as Sanath Jayasuriya, but I did show the Sri Lankans something they very rarely see: a forward defensive.