I enjoyed my morning shower in the hostel just as much as I enjoyed the one last night. Not at all, in other words, as there was still no hot water. But warmed up by an Aldi pastry on the outskirts of town, I headed north out of Częstochowa along the busy 483 for the first half of the day.

Websites on cycling in Poland reckon the standard of driving isn’t very good, but I found it very skilful indeed. Vehicle after vehicle could pass within six inches of me and yet not quite make contact. 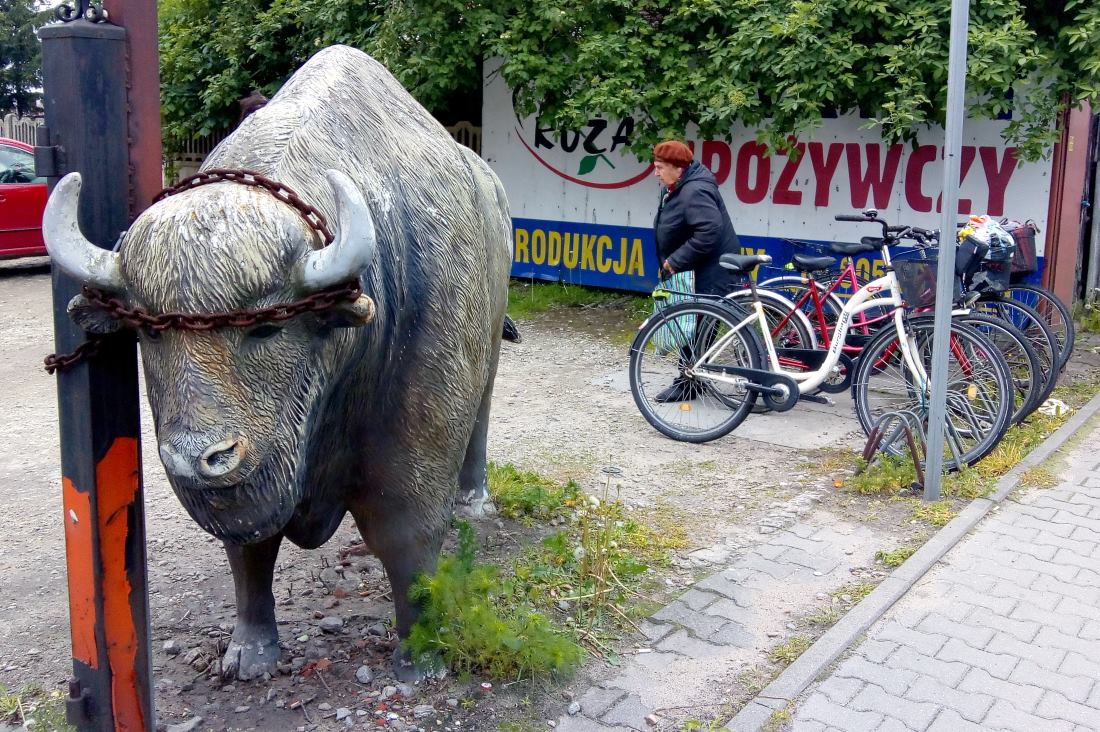 More mystery animal sculptures, after the elephants and dinosaurs of Day 2: this bison (pic), outside a supermarket in Nowa Brzeźnica, guarding the bike racks. There was another bison outside the rival supermarket opposite guarding their bike racks. A subliminal advertising ploy by the brewery Żubr (‘bison’), perhaps? In which case it didn’t work. I got cherry Coke. 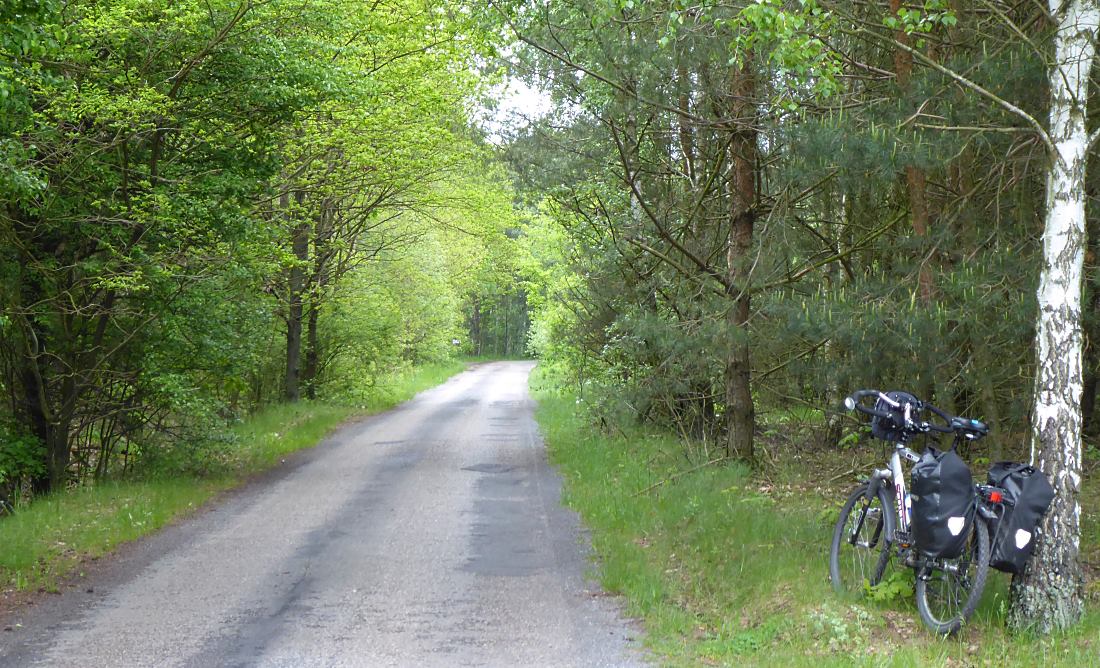 The second half of the day was on tranquil, almost untrafficked back lanes threading through woods (pic), farmland and backwater villages. Each would have a handful of houses, a church, a roadside shrine or two, a little grocery store, and a few old locals making stately progress on bikes, toting shopping bags, heading who knows where. They no doubt thought I was one of them. 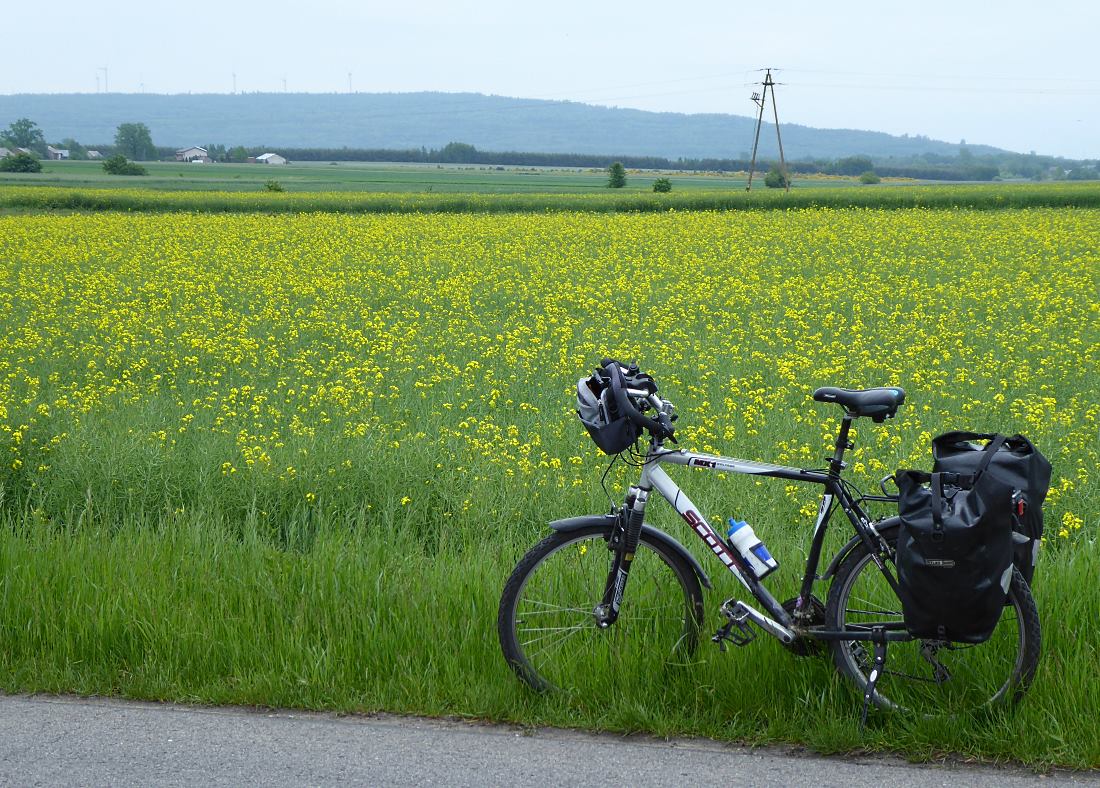 At times the gentle, flat scenery (pic) reminded me very much of my regular ride between York and Hull to see my mum. Though while I’ve seen many a red kite in East Yorkshire, I’ve never seen an eagle, which I did rather thrillingly today, flying about 50m in front of me and very low to the ground. 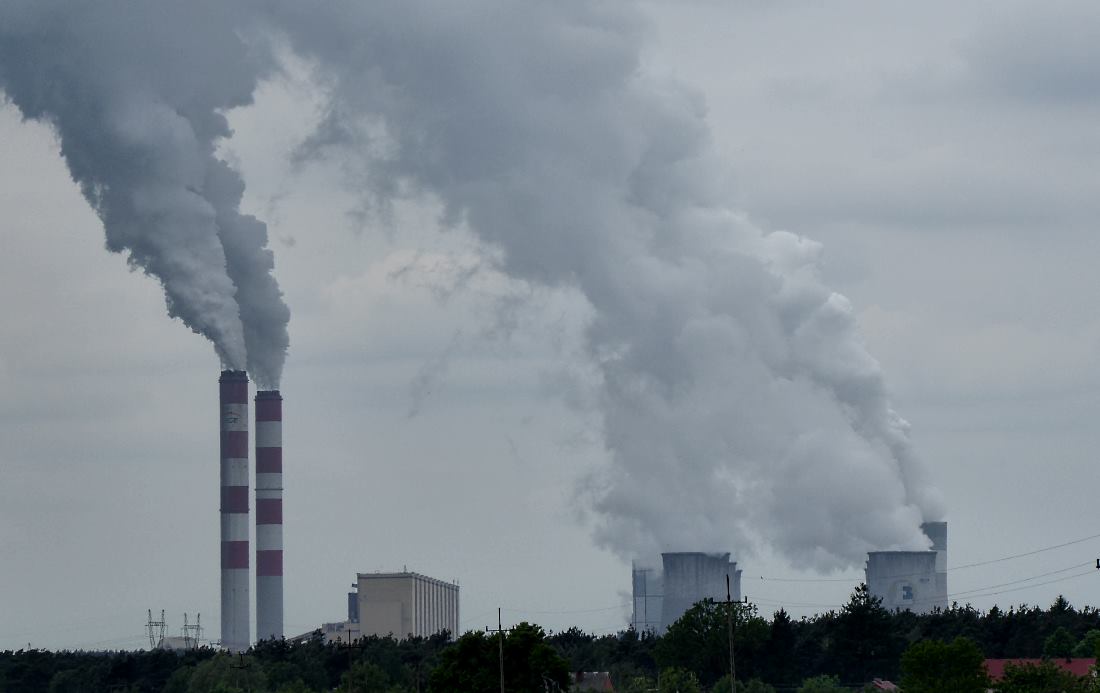 Indeed, a feature of the view west from anywhere between York and Hull is the power station at Drax. Well, this part of Poland can beat that. The power station outside Bełchatów, visible for miles around (pic), is quite a record breaker.

The largest coal-fired power station in the world, it produces 20% of the country’s entire electricity supply, produces more CO2 than any other European entity, and is the most climate-damaging power plant in the EU, according to the European Commission. Nationalist far-right Poles, on the rise here, must be very proud of it.

I checked into my rural accomm in a lovely villa house in the village of Janów in mid-afternoon, and enjoyed a soak in the feature bathtub. Unlike my morning shower, there was plenty of hot water. I can see the power station that helped produce it from my window, and I’m feeling a little guilty.