On a lovely sunny day, a delightful, easy, flat ride through gentle countryside ending in one of Poland’s most vibrantly rebooted, and confusingly pronounced, cities. From woods to, well, Łódź. (Granted, that doesn’t really work if you don’t know Polish orthography.) I’m on my trekking bike for this trip. It was a clanky, heavy old Scott MX1 mountain bike, before I heavily modified it for touring. Making it clankier and heavier in the process, in other words. But it meant I could cycle easily through a series of short-cuts through woods on tracks and paths (pic) saving myself around twenty km of road.

These bits were lovely, with the only sounds being birdsong echoing around the trees. This was thanks to my drivetrain no longer squealing, the result of my having begged some lube from the friendly hosts of my fabulous guesthouse last night. 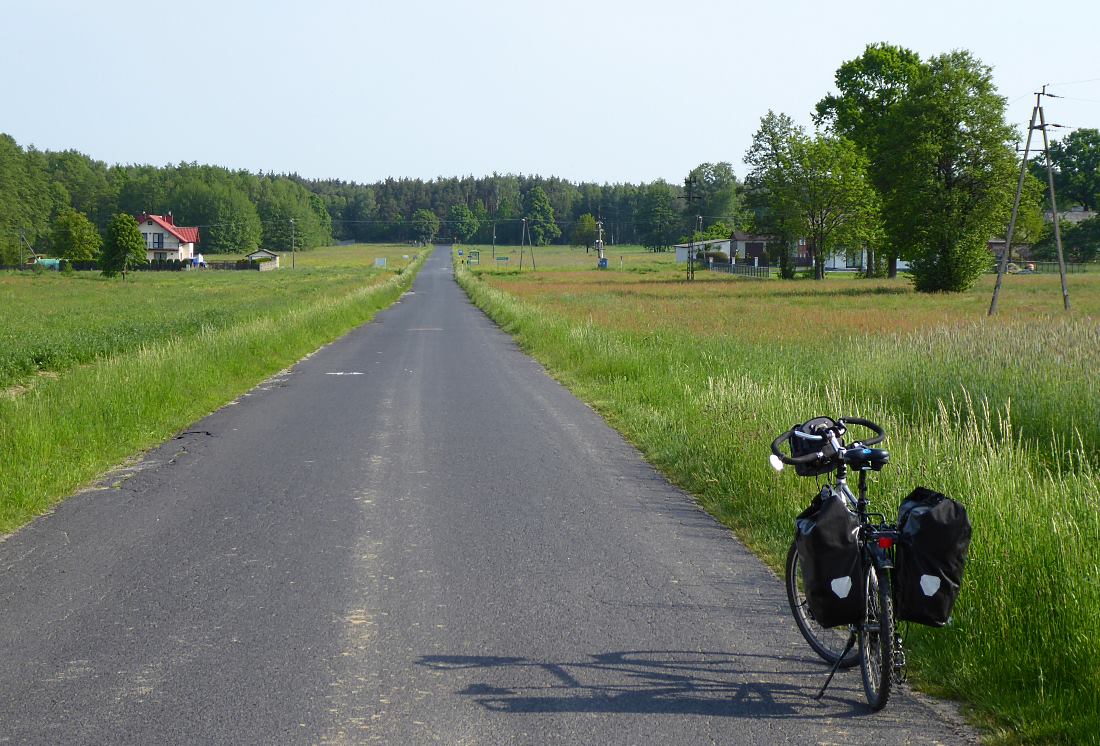 Most of the day was like this (pic): tranquil riding on virtually empty country lanes. Polish villages and hamlets are not picture-postcard pretty, I have to admit. Like I say, it reminds me of East Yorkshire’s featureless Holderness plains, so presumably Philip Larkin would have written loads of poems celebrating the gentle, quiet mundanity of these places.

Not sure what he’d get to rhyme with sklep spożywczy (‘grocery store’), przystanek autobusowy (‘bus stop’) or uwaga! ciągniki! (‘beware! tractors!’) though. 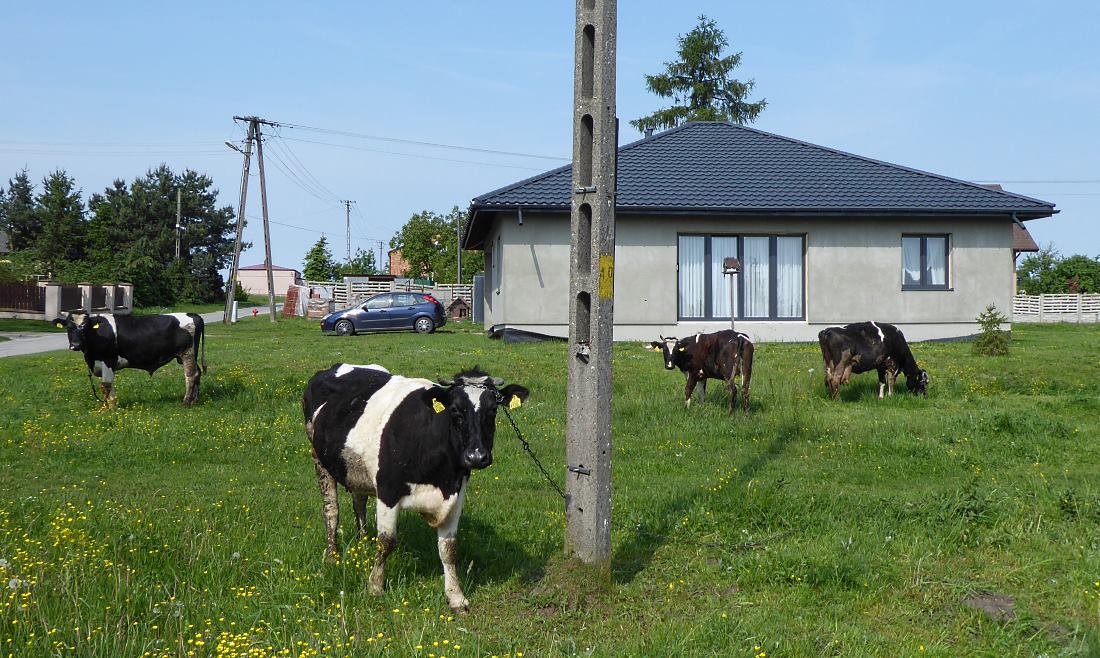 In several villages you see cows grazing in people’s gardens (pic). These ones are auditioning for a cover shoot on the remix of Pink Floyd’s Atom Heart Mother.

And so to lively Łódź, pronounced ‘woodge’, hence the joke in the first paragraph. Once a byword for dull grey postwar decline and a place even bears would avoid, Łódź has reinvented itself as a thriving city of street art, commerce and pavement cafe-bars. 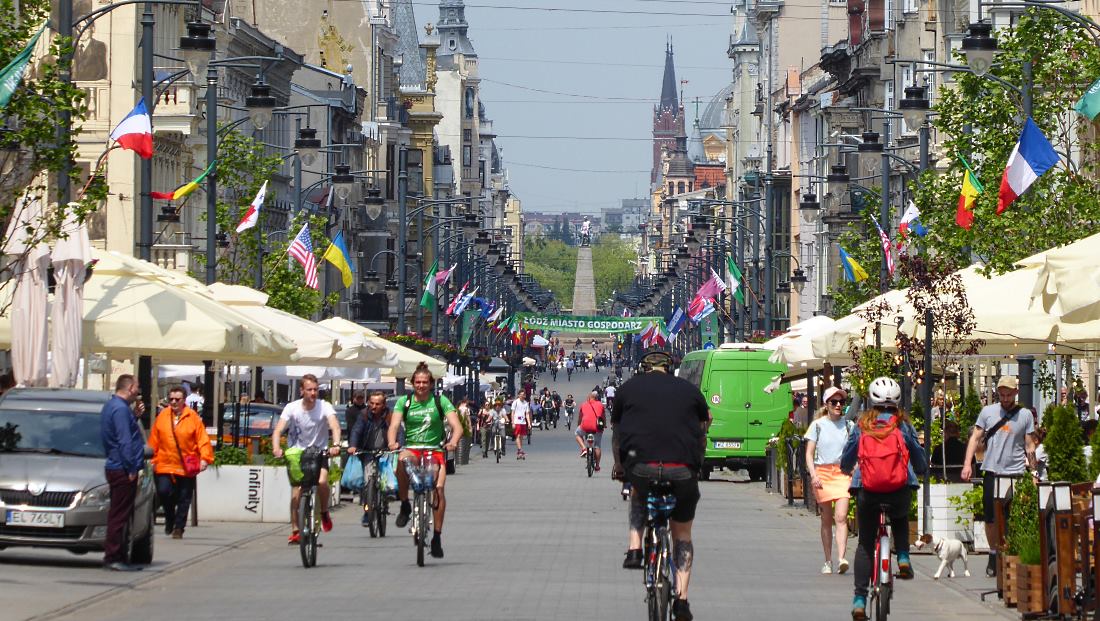 Old textile factories are now cultural and shopping centres, and the main drag, Piotrkowska Street, has a mile-long pedestrianised centre buzzing with bars, restos, cafes, artisan shops and street art. And it’s bike-friendly, making it easy and pleasant for all to get around (pic).

Taxis are allowed, but thanks to being heavily outnumbered by pedestrians and cyclists, they can only be slightly impatient and annoying, instead of very.

Łódź is a big, sprawling place – it’s nicknamed ‘the Manchester of Poland’, for industrial history rather than footballing reasons – and when I visited last time in 2015 I found it too big to walk around, ambling between bars rather than hiking out to its various architectural attractions, parks and museums. 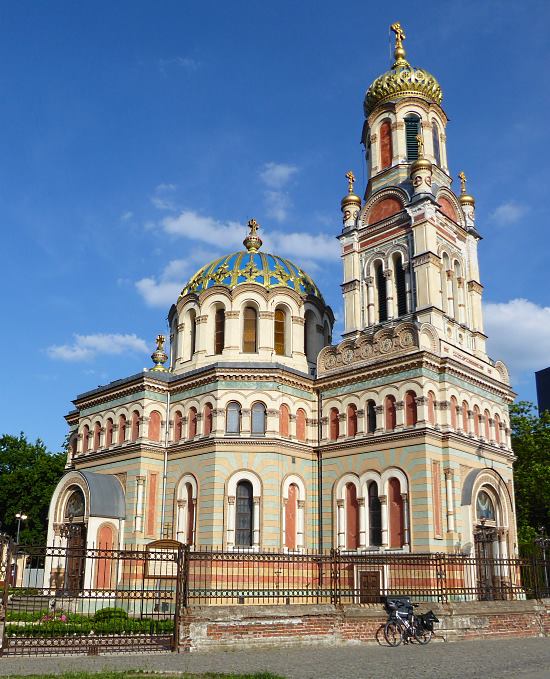 But if you have a bike there’s plenty to see, and so as this is the halfway point in the End to End ride, I’m taking a day off tomorrow to roam the city.

This, for example, is St Alexander Nevsky (pic), a fine Orthodox church that I stumbled on while riding round in the evening.

Mind you, I was looking urgently for a toilet at the time, so wasn’t in the best frame of mind to appreciate the design.

As I sat enjoying a £1 pint with my burger at one of Piotrkowska’s patio bistros, there was a stark reminder of the rise of right-wing nationalism that’s here in Poland as much as in Britain and elsewhere in Europe: a small but vociferous demo (pic) of a local ‘traditional values’ party (translation: no minorities).

But compare their turnout to the number of people who ran, jogged, glided, scurried, walked or shuffled past my table at the climax of the 10km ‘Rossmann Run’, which finished along the same stretch of street a couple of hours later (pic). It seems that far more of the city is up for a bit of celebratory, benignly competitive fun running together than being far-right reactionary nutters. So I was happy.

Until I realised my hostel was the other side of the runners, so I’d have to wait twenty minutes before I could cross and head for my shower.

Poland is one of the most homogenous-white countries in the world, and you rarely see a black or brown face. At least we did this evening – they were the ones way out in front, finishing first, being roundly cheered.