The third of my Rivers Rides was a beautiful two-day, 102-mile trip from Dales highlands to York flatlands along the River Wharfe. Day 1 featured England’s most awesome viaduct, a Roman road, thrilling scenery, beer for dogs, an unpronounceable village, a superbly ruined Abbey, and the world’s most dangerous river. Allegedly. 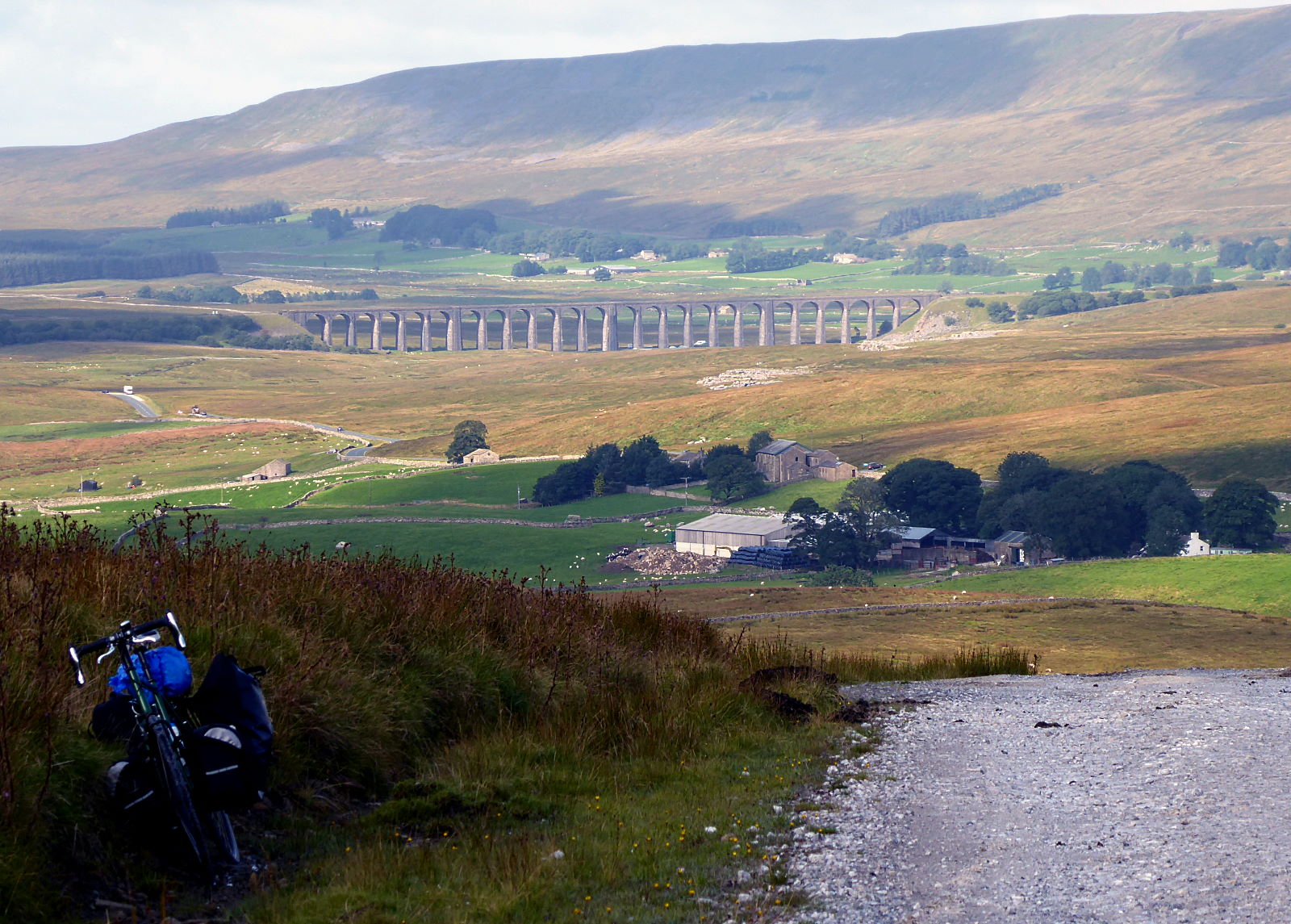 Yorkshire’s — and therefore England’s — most awesome viaduct is, of course, Ribblehead (pic). Every time I come here, it’s different. Sometimes it’s heavy rain; sometimes it’s only light rain. Today was a light-rain day. It looks a bit sunnier on those ‘A Yorkshire Year’ calendars. Clearly the photographers have access to more accurate weather forecasts than the BBC website’s pack of lies.

From Ribblehead I climbed steadily up the track to Cam Fell (pic), with Pen-y-Ghent moving strangely around behind me like a hitman in the rear-view mirror. The Wharfe starts out on these slopes, as rain trickling down to Oughtershaw Beck on its long journey to the Vale of York. In the middle of nowhere, the track mysteriously becomes a smooth tarmac road (a Roman road, indeed) which takes you up to Fleet Moss — a legendarily tough climb for cyclists who, unlike me, don’t keep stopping to take pictures and eat sandwiches.

The Wharfe proper starts here (pic): the confluence of Green Field Beck and Oughtershaw Beck — ‘Ottershaw’? ‘Ortershaw’? ‘Outershaw’? There was nobody around to ask, except Dales Way walkers with better rainproofs but no more idea of local pronunciation. 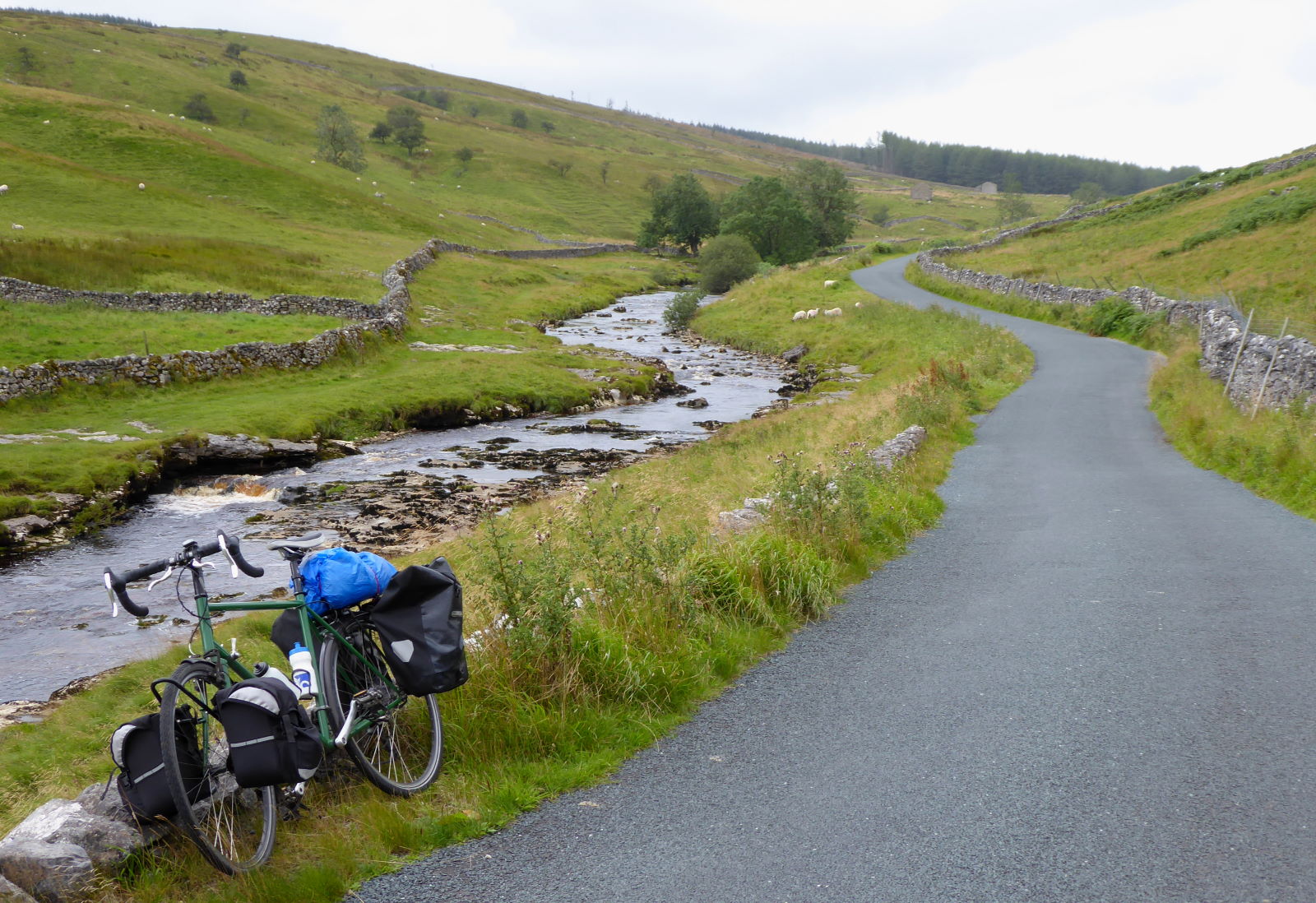 The sun gradually came out, and Upper Wharfedale looked lovely (pic). I had it to myself apart from anglers and sheep bleating. The bleating of the anglers was worse.

Wharfedale’s upper villages are postcard-pic staples. Buckden (pic) could almost be in Scotland. Obviously you can’t get haggis in the chip shops here, but on the other hand the nearest bagpiping busker is 123 miles away at Carter Bar, so swings and roundabouts. 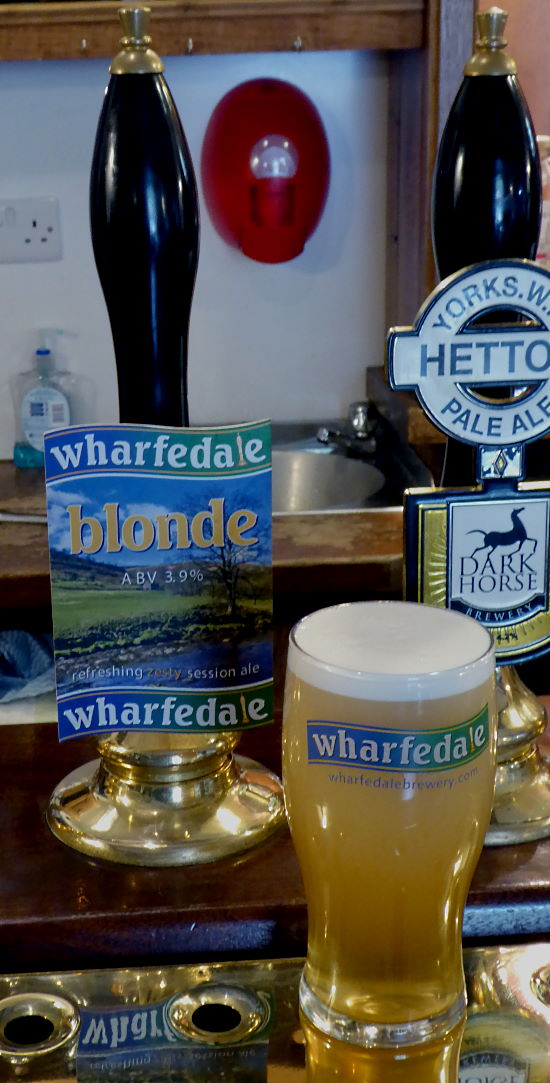 Kettlewell is well-known to cyclists for its position at the foot of Park Rash, a notoriously steep climb, but there’s no better way enjoy Wharfedale.

Except perhaps to do what I did: dodge a rain shower by sheltering in the Blue Bell, and having a pint of the stuff (pic).

A barrel outside offered dog beer of sorts: ‘Pooch Brew (0%)’ on tap into a bowl. Non-alcoholic, as of course they probably have work rounding up sheep later on.

Grassington is a popular tourist village (pic), thanks to its pleasant cobbled centre which would be a lot more pleasant if there weren’t so many damn cars parked there. And ones trying to. Splendid Linton Falls are nearby; I found them rather underwhelming, and only later realised I’d gone to the mundane hydroelectric plant upstream by mistake. It pays to do your research. That’s probably why I’m skint. 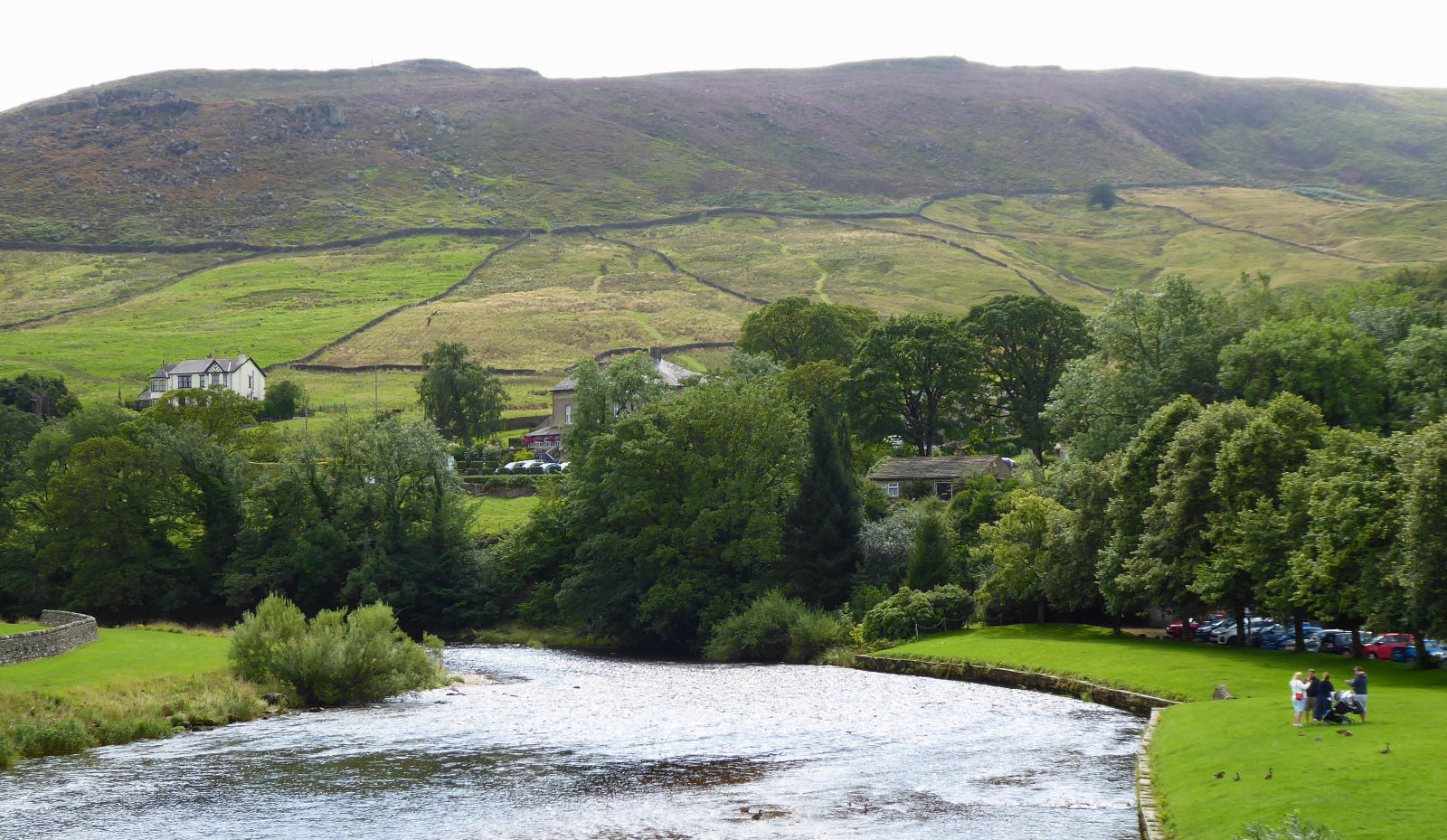 Further down, the village of Burnsall looked delightful in the sun, with visitors picnicking and strolling its Wharfeside green (pic). A little further on is Appletreewick, pronounced by the locals ‘Aptrick’. Or, after a pint in the gloriously olde-worlde, cruck-barned Craven Arms (‘Gateway to the Ales’), ‘Appick’. Or, after a well-kept pint of Theakston’s Old Peculier, ‘Apshk’. 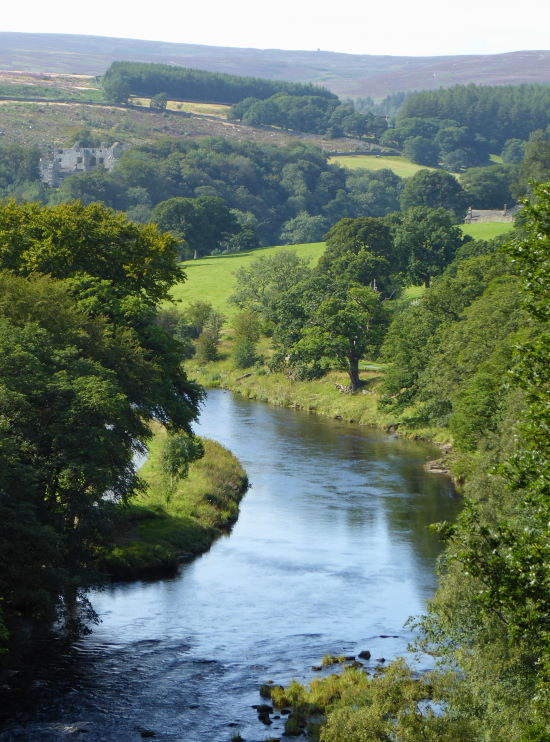 South of Appletreewick, I followed the riverside path — pushing, in accordance with the wishes of the signs — through Bolton Abbey park.

This view of Barden Tower, the ruin in the distance, inspired a JMW Turner painting.

He travelled around here in 1808, making many sketches and watercolours. Art lovers and cartographers alike have been amazed at how geographically accurate they are: in short, not very much. 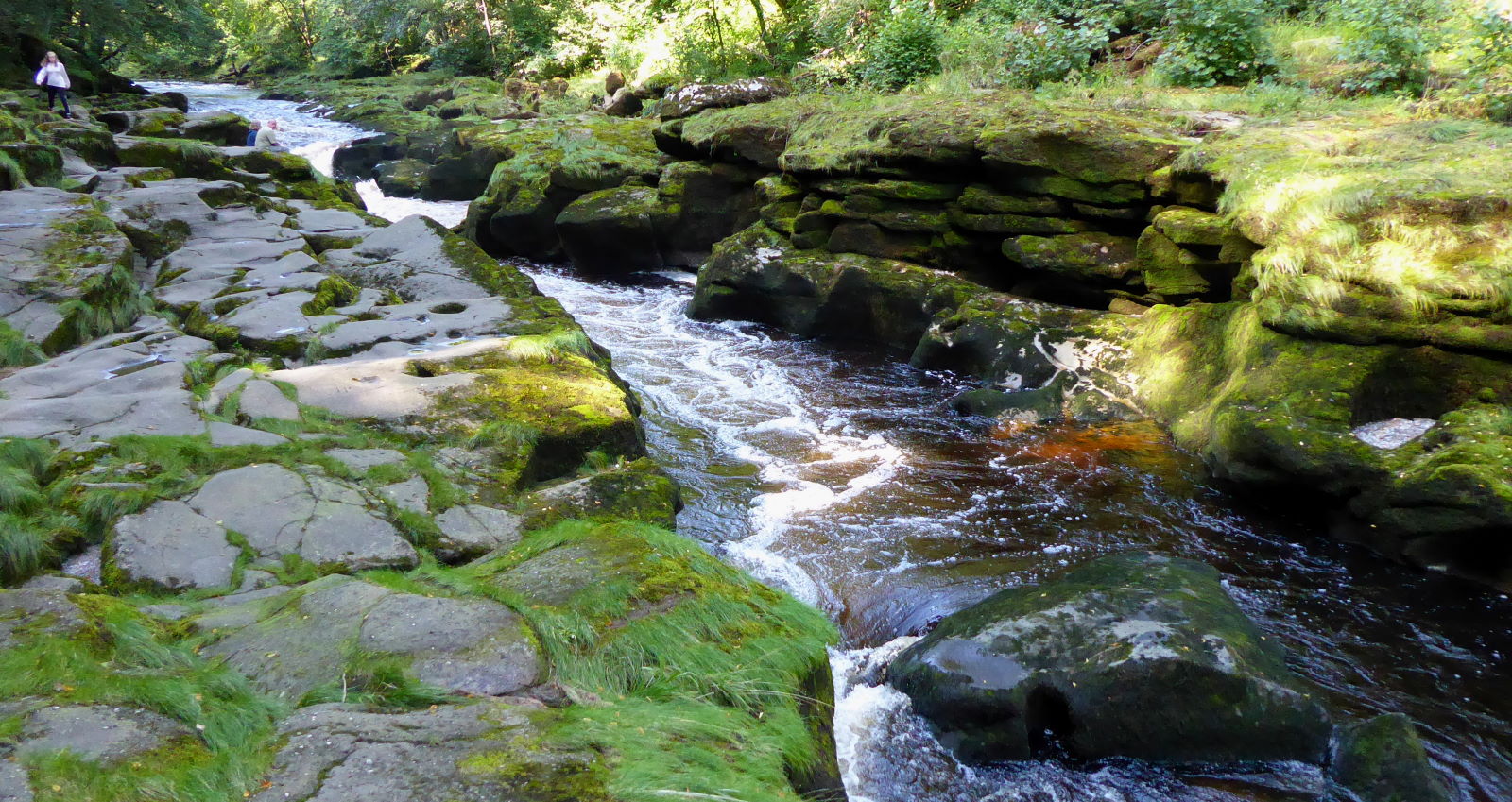 A little north of Bolton Abbey is the world’s most dangerous stretch of water. No, really. According to some. (Though according to some, leaving the European Union was going to be the easiest deal in human history.) The Strid (pic) is where the placid, wide Wharfe turns angry, and sideways, as it forces its way through some jagged limestone rocks.

Many, many people have been tempted to do something foolish here, such as write articles about the thousands of lives the Strid has claimed, only to find to their horror that there’s only evidence for a dozen or so. Compared to the danger of crossing roads, say, which do claim thousands of lives, a year, but which tend to be overlooked by our deluded car-centric society. That said, I wouldn’t try jumping across here if I were you.

My glorious day ride finished at Bolton Abbey (pic), where many hundreds of visitors, having miraculously cheated death at the Strid, were strolling round the ruins’ pleasant grounds. I spent a very sociable evening camping round the corner here along with my sister-in-law and her boys, meeting lots of new people. Because we were playing cricket, and I had a lot of big hits to retrieve that had rolled into people’s tents.