York’s a Viking City: indeed, it’s twinned, uniquely, with itself. With its past incarnation, Jorvik, the place thus rebranded by those non-horned-helmet-wearing Danes in 866.

But York is also a Roman City, and today I was cycling in search of its Latin past. The Romans set it up as a garrison town in 71, utilising the location of a defendable ridgetop (the river was a few metres lower then), the proximity of rich and fertile level farmland, and the handy river access via the Ouse to the Humber, North Sea, and rest of the world – not that you think there’s much need for that, if you’re from Yorkshire. 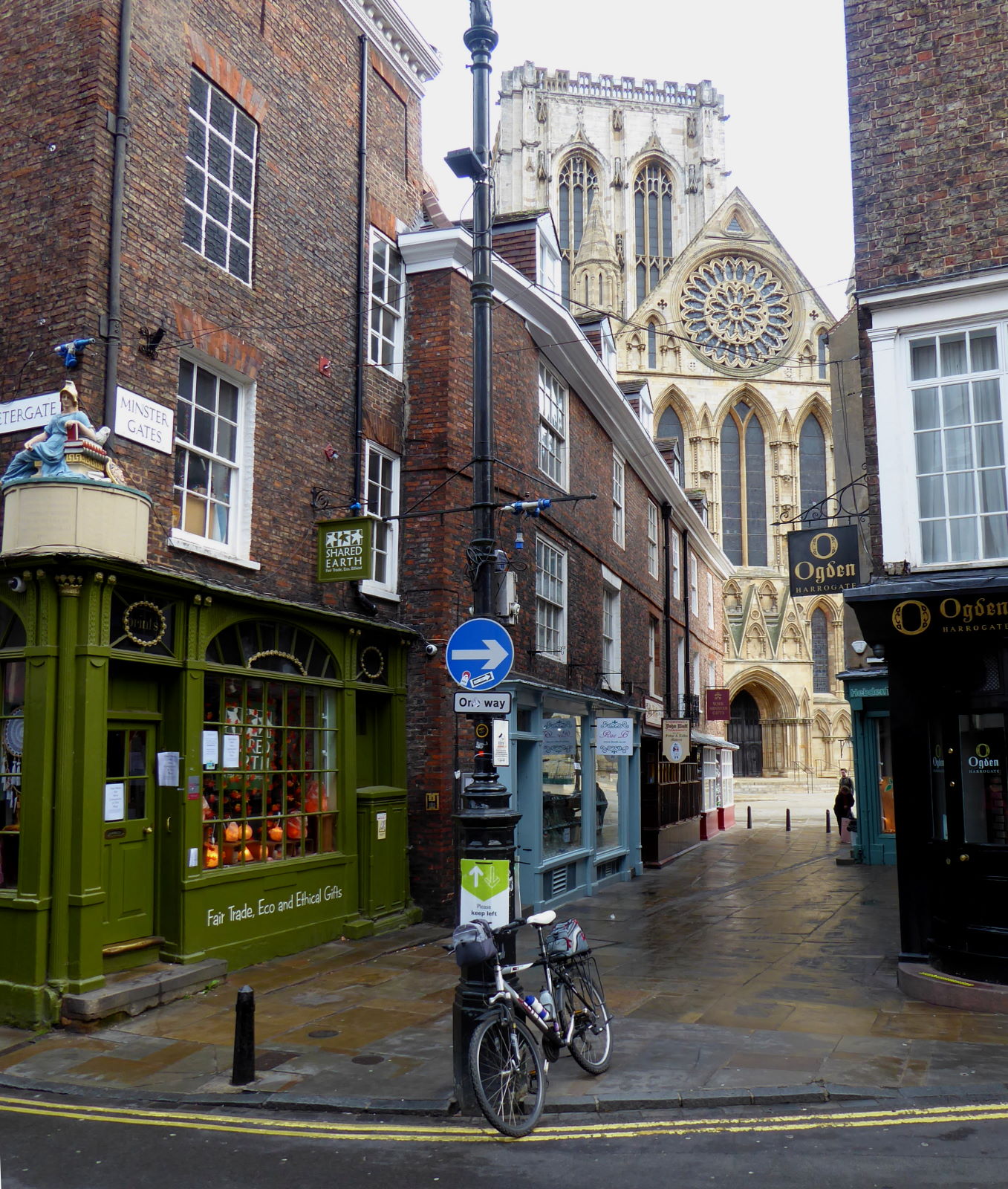 Over the next three centuries, Eboracum (as they called it, and as I call it for the purposes of indexing this post) grew into a thriving imperial town and administrative centre, before the empire – and the city – collapsed. But there are many reminders of the era, celebrated in many a walking tour of the centre.

The centre of Roman York was right here, at the junction of Stonegate and Petergate (pic); the site of their equivalent of the city hall is now occupied by a religious building.

There are several relics of the period – often, in a way characteristic of York, in an almost throwaway manner: history, yeah, we’ve got loads of that. The remains of the old bath-house are in the cellar of the Bath House pub in the centre; the Multangular Tower, a chunky part of the original fortress, is a backdrop for picnickers in the riverside museum gardens; and part of the old city wall is in a council staff car park (pic), opposite the Theatre Royal. 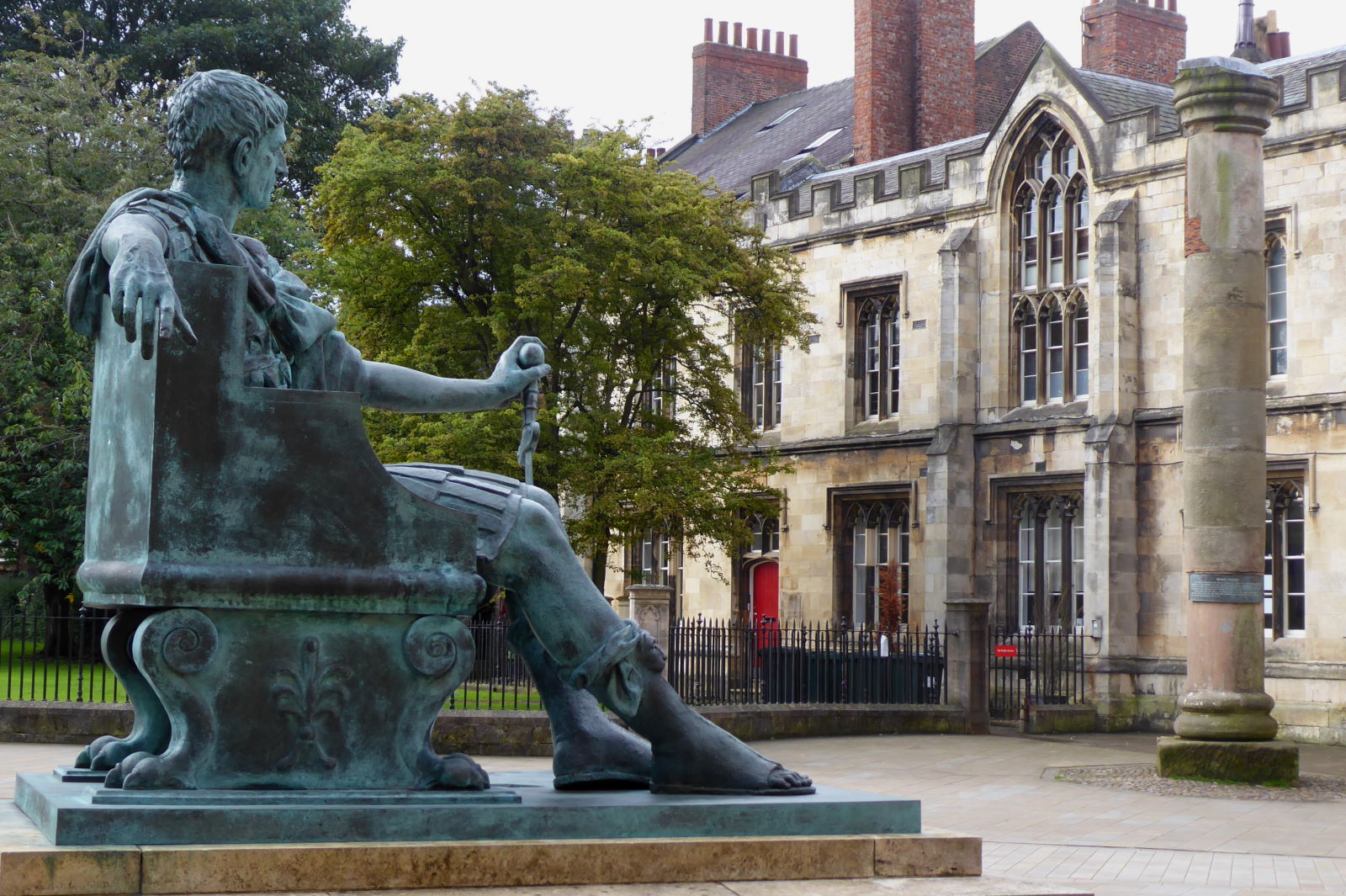 That ‘religious building’ is the Minster, of course. Minster Yard now sports a statue of Constantine (pic), who happened to be here in 306 when he succeeded his father to become emperor. The current Tory government may be known for their U-turns, but Constantine effected a spectacular one of his own: Christianity went from being illegal to being made, under his watch, the state religion.

That column in the background was found in pieces under the Minster during works, and reassembled as a monument to York’s founders. Unfortunately it was installed upside down. 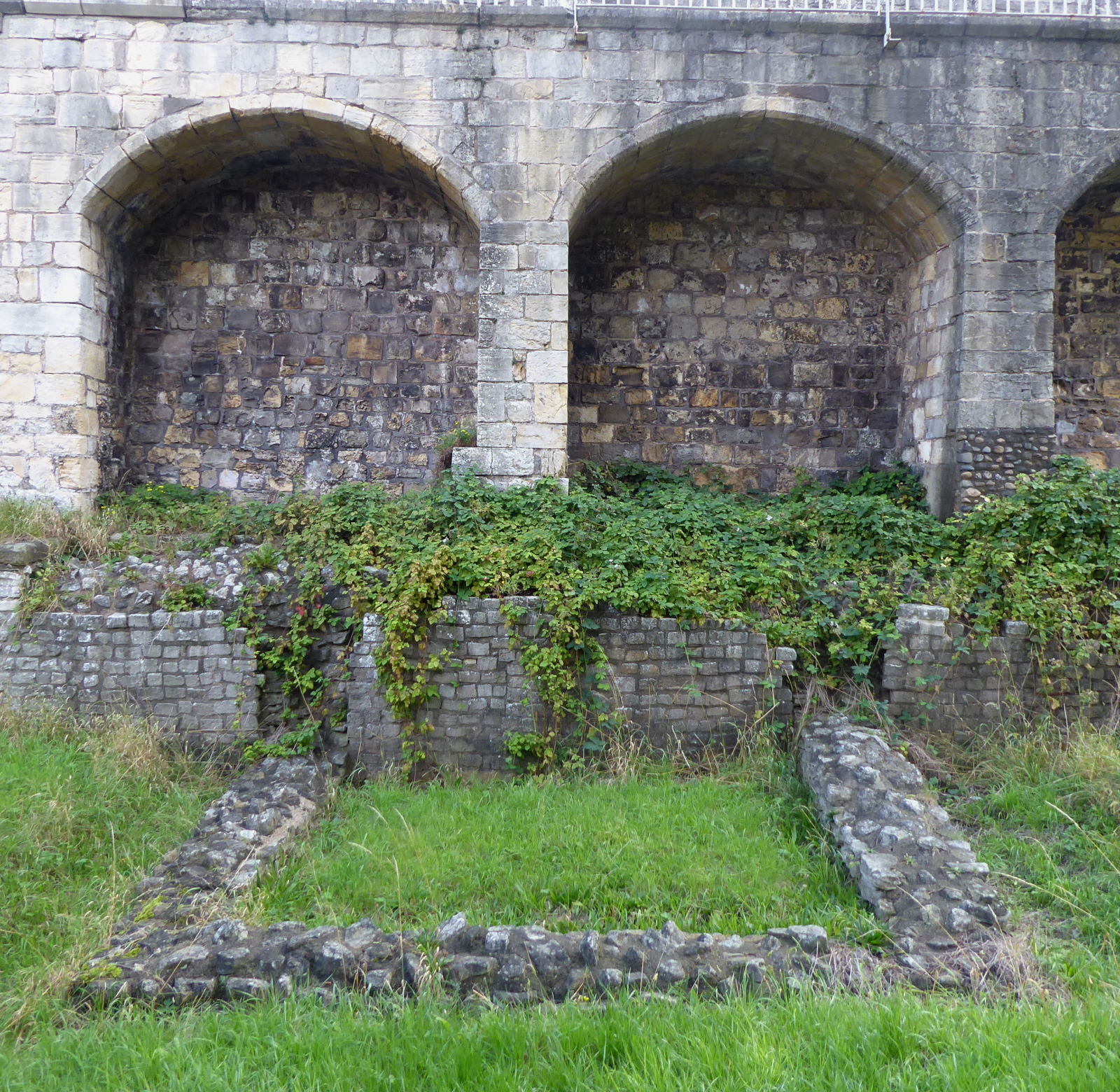 My last look at bits of third-century masonry was off Aldwark (pic). The square visible at ground level is the ancient foundations of a Roman Wall watchtower.

From here I biked out along the old Roman Road to Bridlington. The seaside town was a big deal to them, not for bracing swims or ice-cream, but for its harbour and significance as a shipping hazard (they put a lighthouse there, but nobody knows exactly where).

Hence the need for a transport artery to the town, which then left York’s walls on what is now Monkgate, over the Foss to Heworth Green.
That road to Bridlington is known to historians as Roman Road 810. According to local researcher Mike Haken, while there’s no evidence of the exact course of the road, everyone agrees there must have been one. 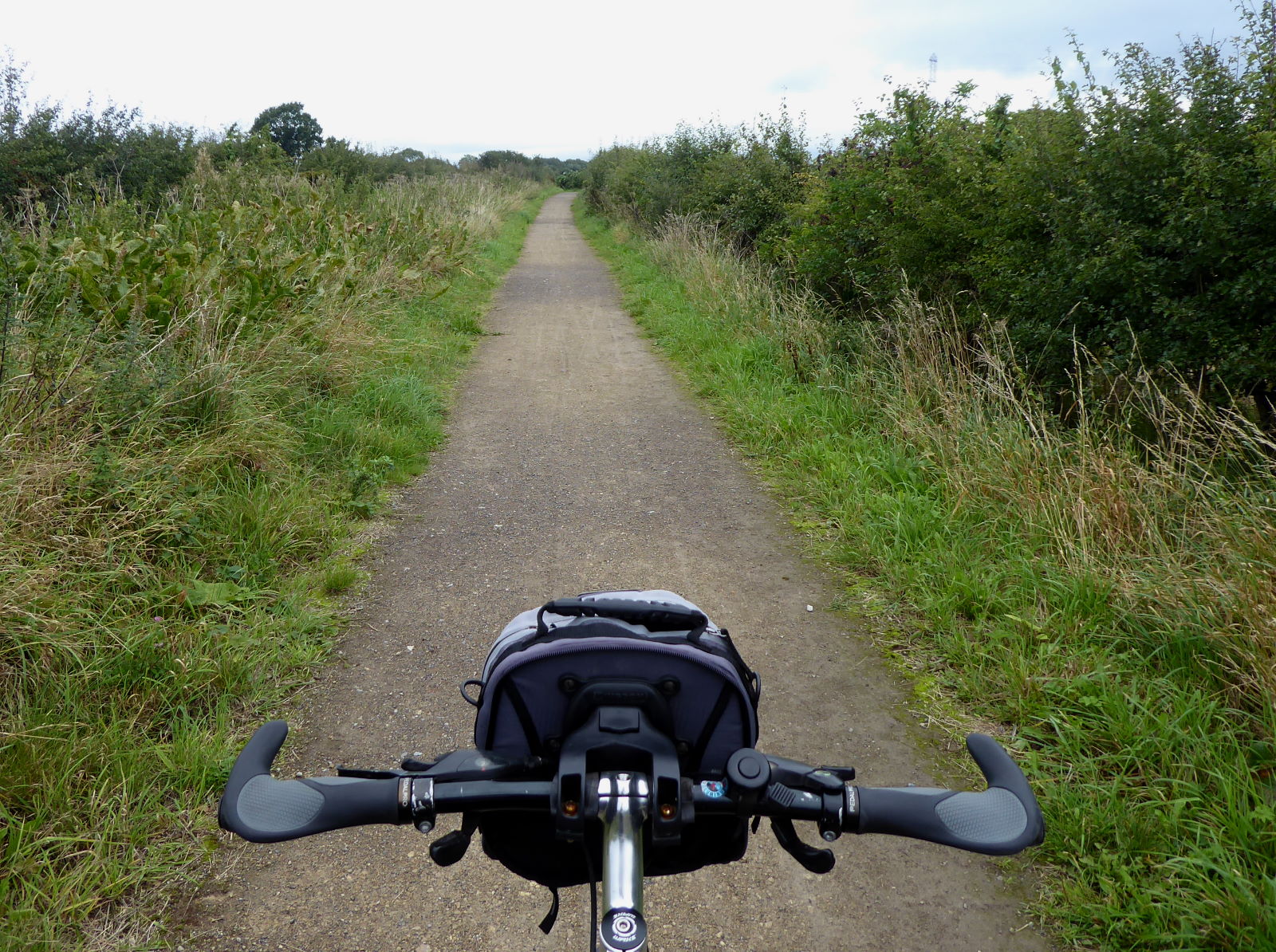 After Heworth we don’t know quite which direction it headed, but at some point it must have slanted across today’s bridleway called Bad Bargain Lane (pic), which I cycled along for the nearest-feeling thing we’ll get to the old road out of town.

The ‘Roman Road’ markings on Ordnance Survey maps, Haken reckons, aren’t entirely to be trusted. They suggest that RR810 exactly followed today’s definitely non-rectilinear A166 to Stamford Bridge and beyond, but he thinks the actual course of the road was more probably nearer Full Sutton and Youlthorpe to the south. 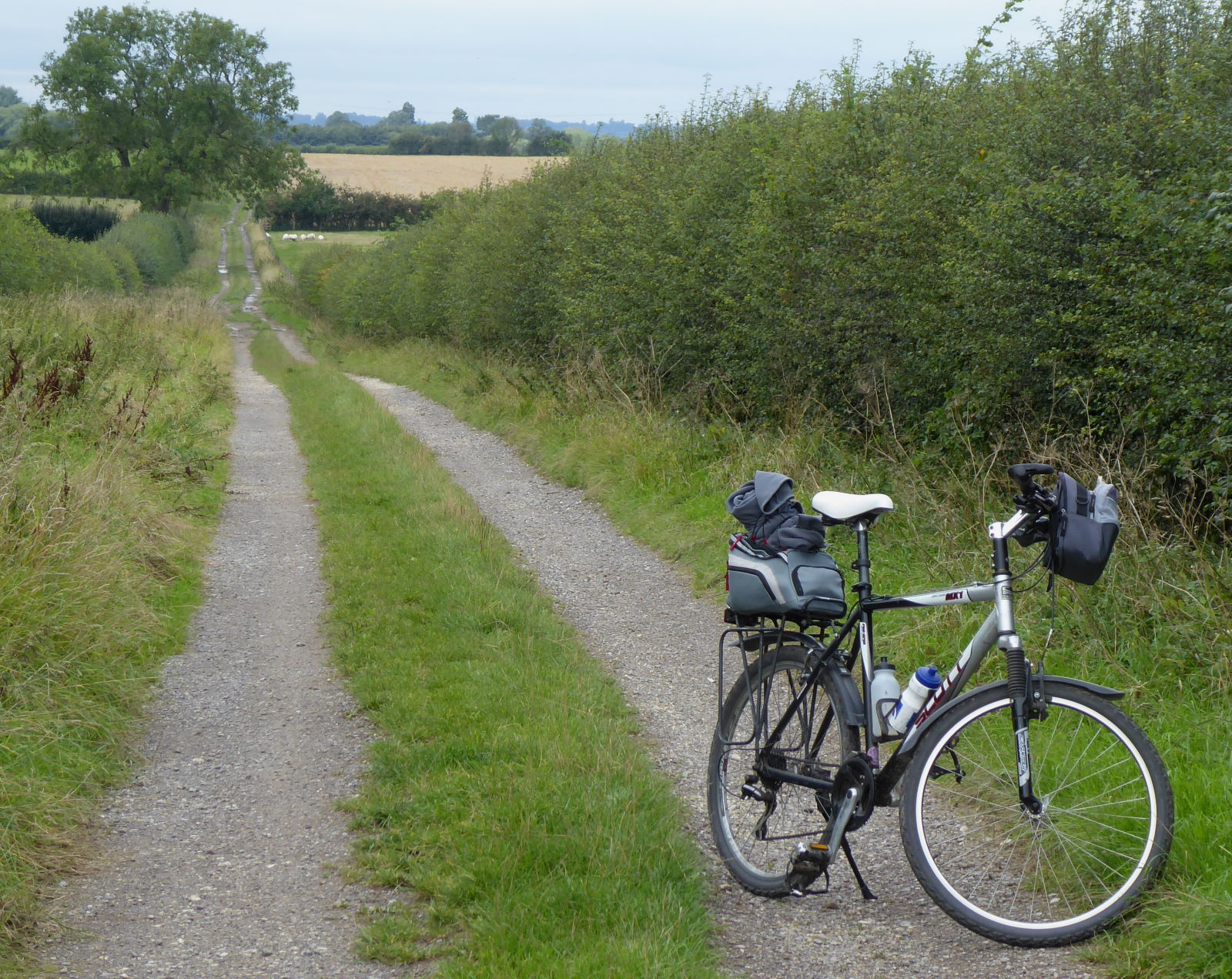 Could it have been this bridleway, just north of Youlthorpe (pic)? Maybe. It looks straight enough, doesn’t it? But then again…

…there are lots of straight-enough, Roman-ish lanes splintered around the map. Like this one, heading for Bishop Wilton (pic). The problem is, none of them join up sensibly. The more immediate problem for me, albeit a pleasant one, was cycling up that hill beyond and out of the village: Worsendale Road, it’s called, but I’ve ridden plenty of worse dales than this. 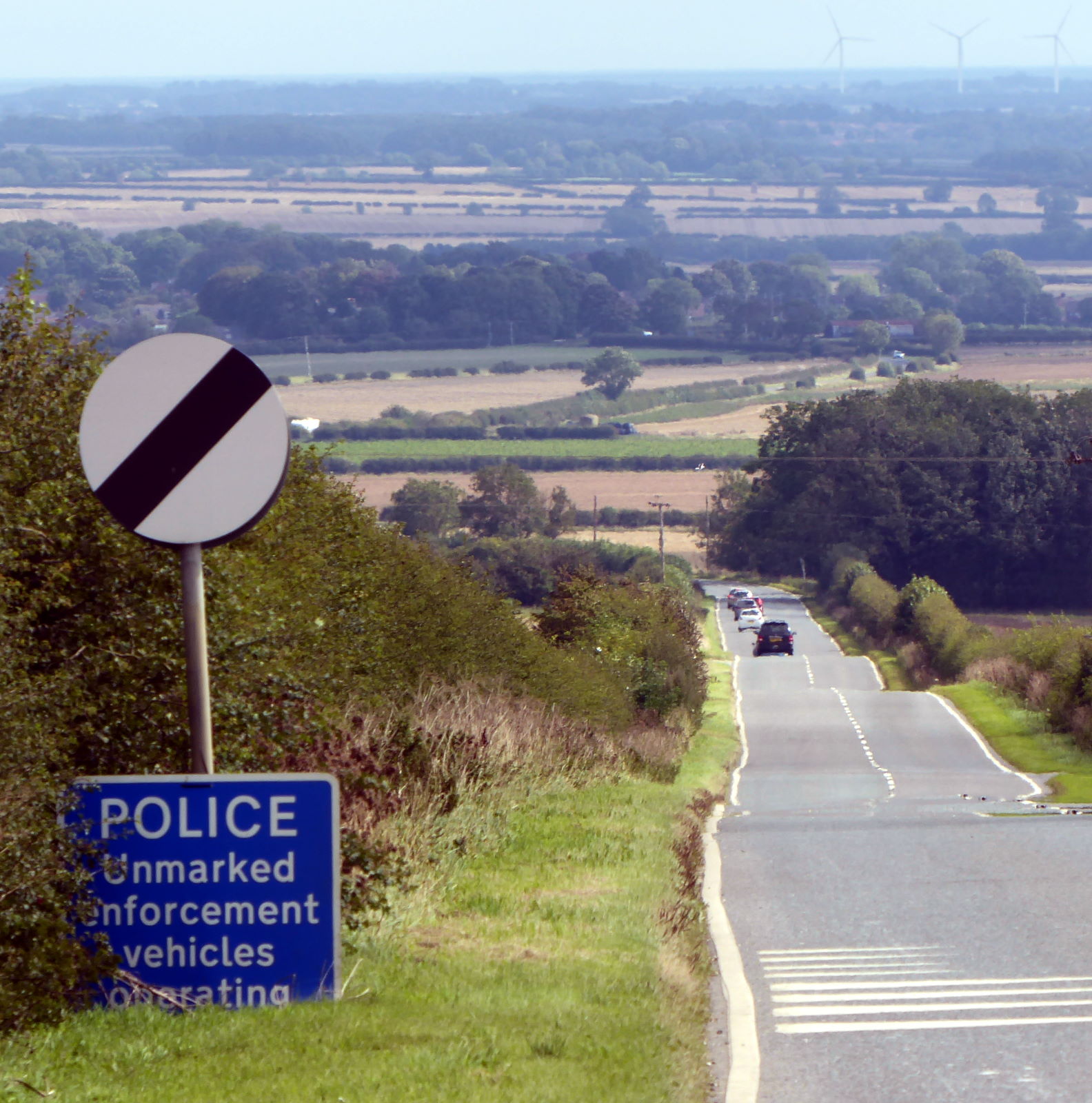 That climb took me to the top of the Wolds, with splendid views back down to the ironing-board flatness of the Vale of York from where I’d come.

The gentle descent down the A166 down the other side (pic) was delightful, with little traffic and a wide road whose straightness does suggest Roman use. 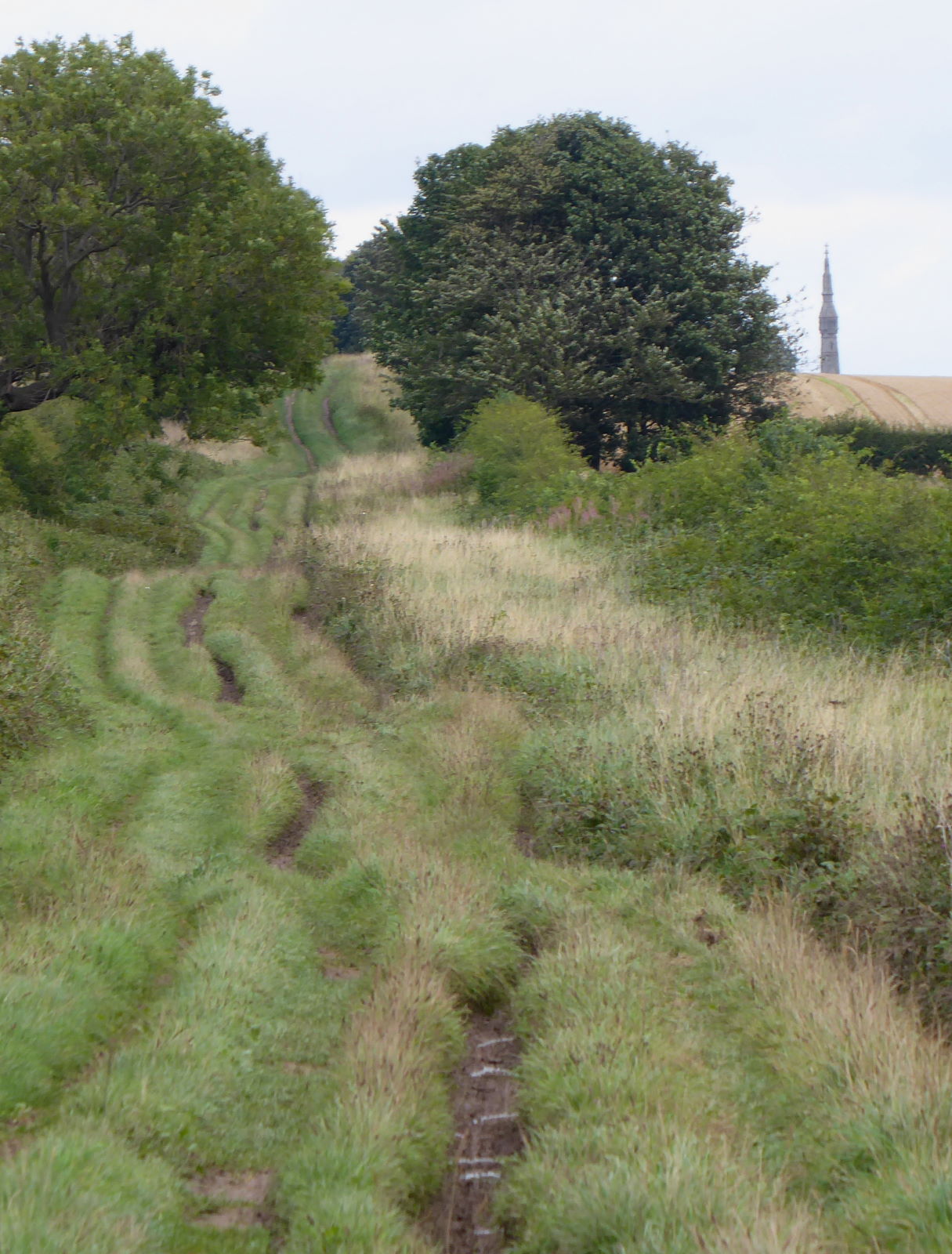 From somewhere round about Fridaythorpe, the course of RR810 becomes clear, arrowing pretty directly to Brid over the hills. Now it’s mostly bridleways for several miles as far as Kilham, and this was the best and the worst bit of the ride.

Best, because it was rugged and authentic and away from traffic. Worst, because it’s often muddy and rutted, churned up by tractors and motorcyclists. On the long ascent up to the monument-cum-folly commemorating decent old toff Sir Tatton Sykes (pic) I did a lot of pushing.
And eating. Because today, in accord with my Roman theme, I ate only food that the Romans would have recognised. It proved less restrictive than I expected: no New-World or Age-of-Exploration stuff like tomatoes, aubergines, peppers, courgettes, chilli, potato or avocado, of course; but plenty else. 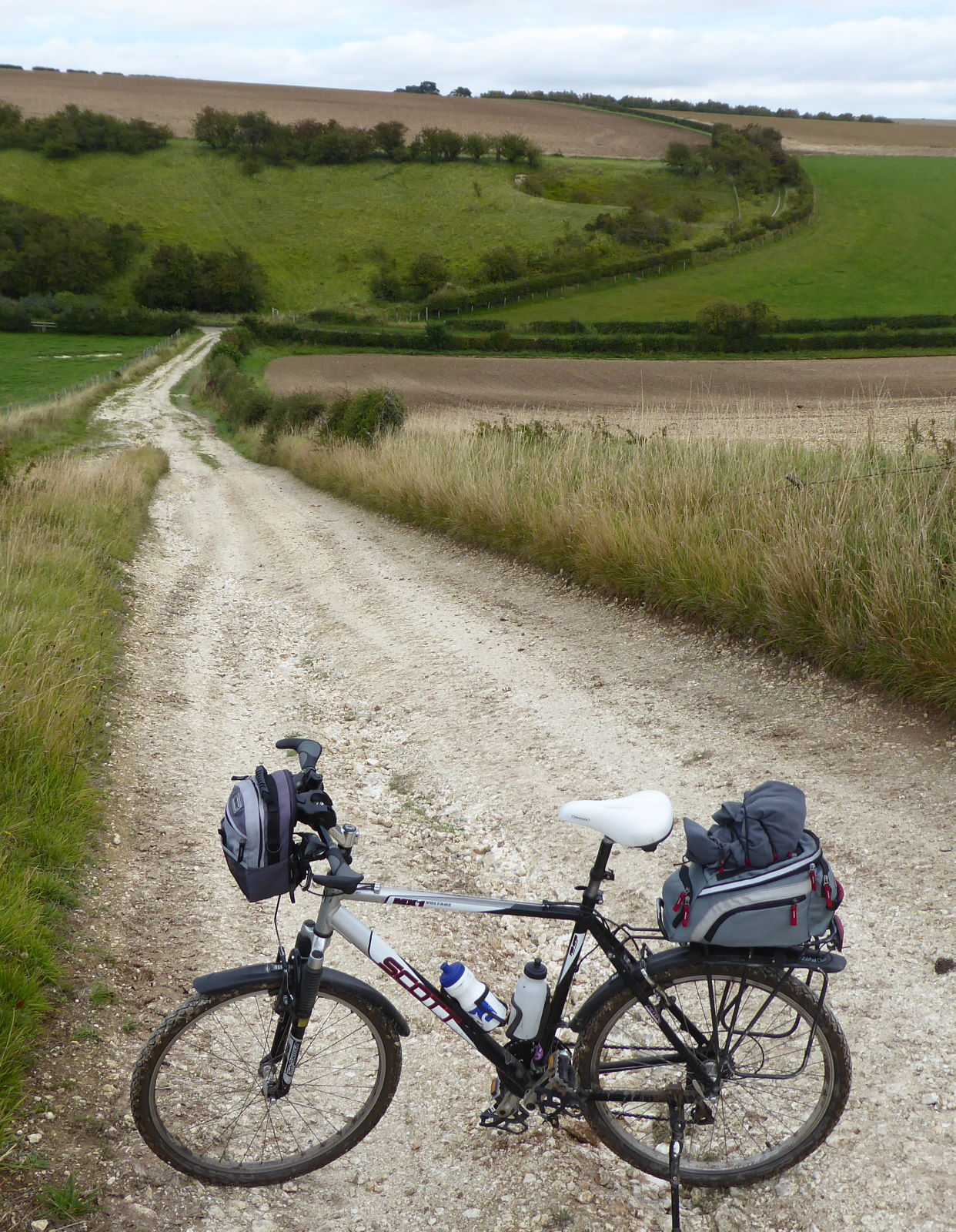 So, for breakfast I’d had the reasonably authentic porridge (they’d have had wheat rather than oats, though) with figs, dates, eggs and cheese.

I did have white bread too, though I didn’t dip it in wine like they’d have done; I had 50 miles to cycle.

And for lunch, as I plodded up to Sir Tat’s rocket-like memorial and then clattered down the chalk track on the other side (pic), I enjoyed decent cyclist’s picnic fare that was authentically Latin: bread, fish, slices of pork, interesting salad, grapes and pears.
I washed it down with water, rather than wine – even if I’d had it watered-down, as they would have had it, that might not have been the cleverest drink in the middle of a bike ride involving some tricky offroad descents. 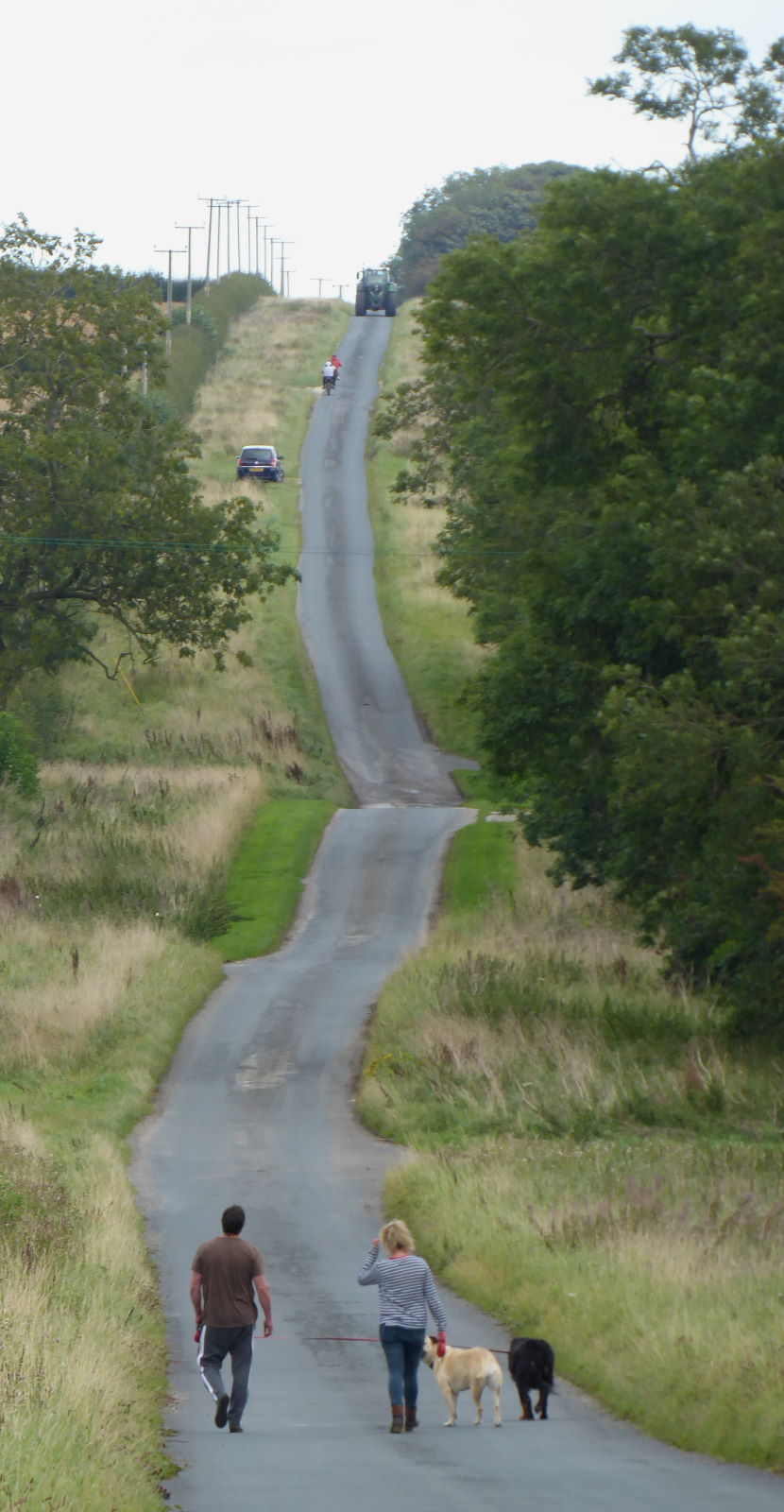 The final few miles to Bridlington was joy: the straight, and clearly Roman, road, now tarmacked and called Woldgate, smooth and virtually car-free (pic) and, thanks to a tailwind, fast and easy.

I waited for my train home in a Wetherspoon and grappled with my final authenticity challenge. Wine or beer?

Both existed in the Roman world, but beer – apparently cerevisia, which explained the origin of one of my favourite Spanish words – was the drink of barbarians, of the grubby unsophisticated, of tattooed native Brits.

So, the decision made itself. I had two pints of IPA.

Back home, dinner was sadly not very Roman. I had a look in Aldi, even Waitrose, but I couldn’t find giraffe steaks, flamingo breast, chaffinch or dormice. Next time I’ll try Booth’s.