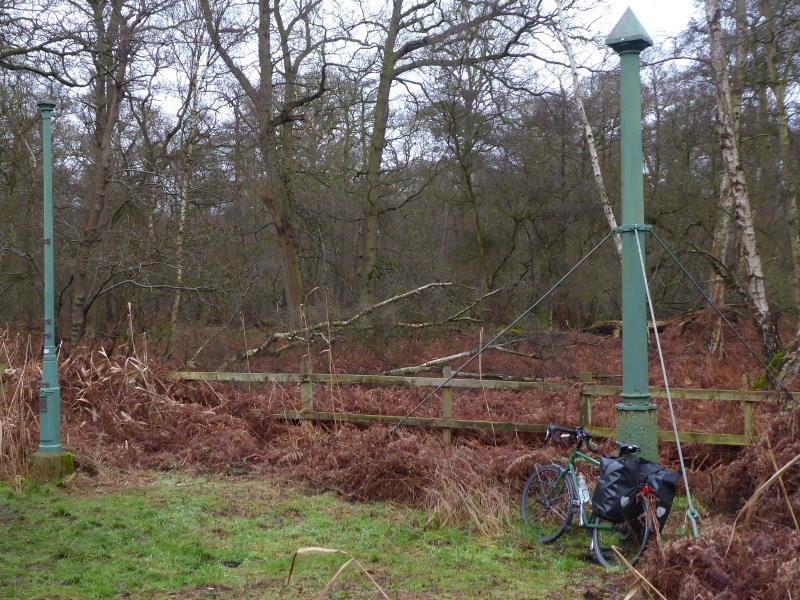 ‘England’s Dead Sea’ is in the fens just south of Peterborough. Granted, it’s not quite as low down – minus 2.75m, compared to minus 430m – but it’s the furthest-down dry land you can cycle on in the UK. It’s the country at its most negative, except perhaps for the comments below local newspaper Facebook posts about LTNs.

Well, I say ‘dry’. It’s damp woodland, with long straight drains here and there. But its place at the very bottom of Britain’s gazetteer, as ranked by altitude, is secure thanks to the Holme Fen Posts.

There are two posts. The first was sunk deep into the ground in 1848 before the area was drained, to monitor the descent of ground level. Its tetrahedral top (visible on the right-hand of the two posts in the photos here) was exactly at ground level. The other post was added in a century later.

Descend it certainly did. Within decades that ground level had plummeted over two metres, and guylines had to be added to stop it falling over. Though things slowed thereafter, the current ‘height’ of the exposed pillars’ base is -2.75m, about nine feet. Cyclists are treated by some drivers as the lowest of the low; well, here, you can actually celebrate the fact.

The collapse of the farmland is also shown by the East Coast Main Line nearby, which you cross to access the Holme Fen Posts. The tracks on which trains roar past are high above the depressed fields as if on a flood bank.

Holme Fen isn’t the lowest place in Britain you can cycle at all – if you include places where the sun don’t shine. In that case, we’d probably be talking the stygian Queensway Tunnel approximately 50m under the Mersey, which you can ride off-peak… though on a busy, claustrophobic road it’s not a pleasant experience.

e2e.bike > Other > Route research > Holme Fen: Lowest of the low