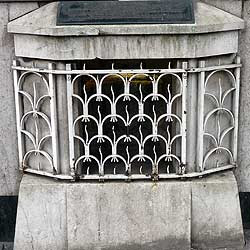 Where is it? 111 Cannon St, in the heart of London, which means a busy road with anonymous shops and bland modern blocks. But at least there’s a pub called The London Stone just down the road. 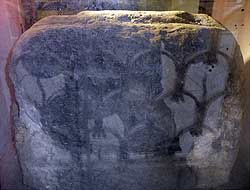 What’s quirky about it? It’s said to be the original centre of London in Roman times: the stone to which all distances in Britannia were measured. Things are more modern now, of course: we have a horse’s bum to mark that (see Quirky London 20). It’s been moved around quite a bit over the centuries and nobody’s quite sure how old or original it is, and to be honest one stone looks much like another.

It’s hidden unceremoniously behind a grille with a plaque on top which reads: This is a fragment of the original piece of limestone once securely fixed in the ground now fronting Cannon Street Station. Removed in 1742 to the north side of the stree in 1793 it was built into the south wall of the Church of St Swithin London Stone which stood here until demolished in 1902. Its origin and purpose are unknown but in 1188 there was a refernce to Henry, son of Eylwin de Londenstane, subsequently Lord Mayor of London.

Why bike there? Packed by day and comparatively deserted by night, combining brash modern trophy architecture with the odd historical survivor, the City is a curious place to cycle round, quite different to the rest of London. A bike can whiz you around the sights much more comfortably and quickly than on foot; londontourist.org has some itineraries.