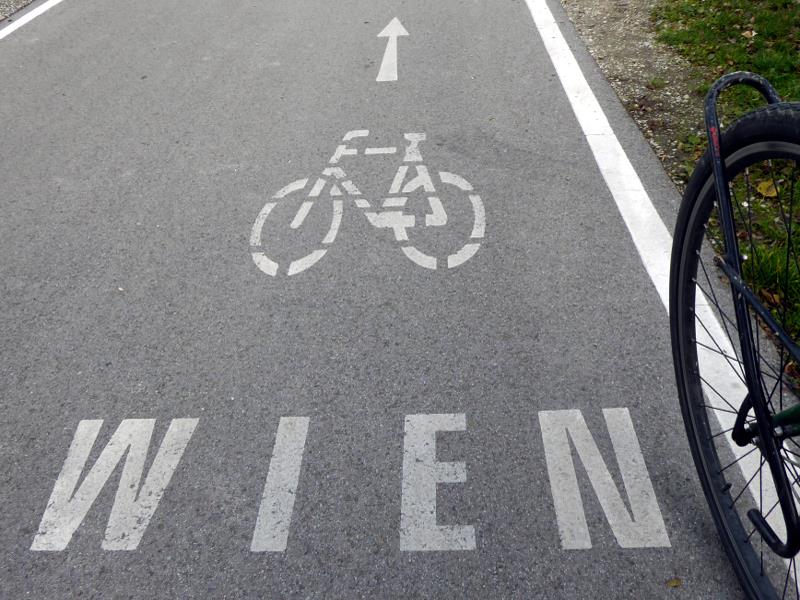 Johann Strauss’s first draft of what was to become On the beautiful blue Danube was a mundane song praising the virtues of street lighting. (This is true.)

Well, today’s stretch of Danube path was definitely more in that vein than the azure lilt of the more famous version. It was foggy and chilly most of the day, and the scenery didn’t bring to mind Viennese couples whirling in tails and gowns. It was more people in hard hats examining leaky industrial pipework.

At least it was mainly flat, even if it felt like being on a treadmill inside Tupperware. The hours rolled by in a grey haze, our only pre-lunch stop being a supermarket where the disabled and parent-parking spaces were being blatantly misused by athletic childless. Well, not all children are visible, I suppose.

But I loved it. I could let my mind wander as I scooted along wide grey paths in the wide grey open riverscape. We were now in wine country, on lanes that cut through vineyards where people were damply harvesting grapes.

Sometime around mid-afternoon things began to brighten up. We stopped to snack on our supermarket booty at a bench on a village road with views could have been Lincolnshire.

More wide, flat, motor-free paths along the riverside. The headwind made progress feel slow but we were doing fine, a steady 12–13 mph. I don’t know what that is in metres per second.

And at last, Vienna’s suburbs: scruffy roads with queues of cars at the railway crossing, apartment blocks in pastel shades, a long canal path with slightly cramped ups and downs and ramps, dodging the locals on shopping and commuter bikes.

We checked into the Meininger Hotel, which unlike its cousin in Innsbruck, had a bar actually stocked with beer, and looked forward to tomorrow’s rest day exploring the city.