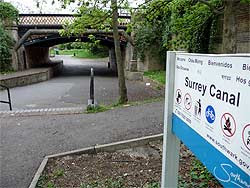 Where is it? Running south into Peckham centre. 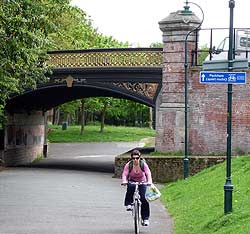 What’s quirky about it? Not just a canal towpath, this is cycling along the canal itself: the old Surrey Canal, which finally evaporated in the 1960s. 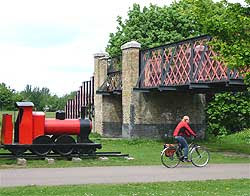 Why bike there? It’s a neat traffic-free route to Peckham… in the day. Probably best avoided at night, unless you have good martial arts training. It ends up at stylish Peckham Library: half book repository, half Stirling Prize winner, half surfboard. At its north end, this bit of cyclable canal turns west into Burgess Park, site of the old canal basin, and the tarmac cycle path has an odd bridge-from-nowhere-to-nowhere (right) going over it.