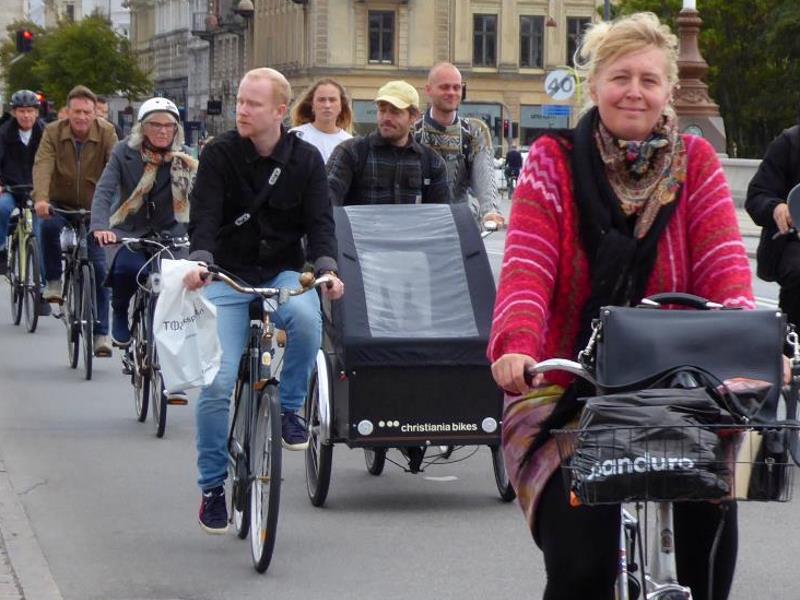 Two days riding round one of the cyclingest cities in the world, with no mermaids in sight. (Obviously she’d use a handcycle, which should present no problems on the Danish capital’s generously wide bike paths.)

Despite our trains from Hamburg depositing us in Copenhagen two hours late, we still had time to explore the centre for a few hours on two wheels.

We followed one of Visit Copenhagen’s suggested routes, round Østerbro, an area popular with families. In Copenhagen, that means cargo bikes.

This route is something to really take your time over, partly because of the charming olde worlde and hygge bits (such as Brumleby), but mainly because it’s a cobbled, complex-junctioned, lousy route for cycling on which you’re forced to walk half the time.

Still, we enjoyed the typical Copenhagen experience of stopping at junctions to gawp at the sheer number of people on bikes. Box-fronted cargo bikes, often shipping valuable commodities such as dogs, shopping, or children, are plentiful.

There was a little thrill as we cycled to our excellent B&B outside the centre. We went through the Carlsberg Brewery, where they make probably the best lager in this part of Copenhagen.

The next day, in other words today, we followed a splendid route Nigel had worked out that took us across some of the city’s most thrilling cycle bridges, and a remarkable recent bike-friendly tower block.

First, though, there was the surprise of coming across a solar system model on a cycleway. I can now add this to the set of planet models I’ve biked along which so far include York (two), a Somerset canal, and a field in Kent.

A few bleakly thrilling way-out-of-town waterside kilometres later we arrived at 8 House, that bike-friendly residential block. It’s in the new dormitory suburb of Ørestad and provides a smooth ridable ramp up to almost all the apartment entrances. As you’d expect, the front yards are packed with bicycles. (And barbecues.)

Visitors are welcome, but requested to push their bikes, which is fair enough. The temptation to stage races down from the summit might be overwhelming otherwise.

Anyway, I got to the top, and was rewarded by a fine view over the green margins beyond.

Heading back to the centre of town via all those bridges, I was pleased to see a primary school with a playground that boasted a practice cycle track for the proportion of children who will grow up to cycle to school, in other words all of them.

Lille Langebro was next on our tick-list, which sounds like an interwar Danish film starlet, but is a curvaceous cycle bridge threaded across the Inner Harbour.

It gets a lot of website coverage, perhaps more than it deserves – there are plenty of other nice curved bridges in the city – though it has the unique feature of a humorous display of fictional heroes unexpectedly set on bikes. These include Jack Sparrow, Superman and Harry Potter, and someone else presumably from Star Wars but I’ve never seen Star Wars so I don’t know.

More bridges and wide cyclist-thronged bike paths later, we got to Nyhavn. This is Copenhagen’s iconic sight, a harbour with picturesque coloured facades and countless restaurants full of tourists. Choosing where to eat was surprisingly easy: we coudn’t afford any of them, so we went to McDonald’s at the top of Strøget.

In the afternoon we went the long way back to the B&B along some cycleways which, as in England, were of variable quality, but unlike in England, they varied from good to excellent.

These took us past lakes, suburbs, parks and mysteriously long ramparts, back swiftly and stress-free to our B&B, where a complimentary beer awaited us. I told you it was excellent.