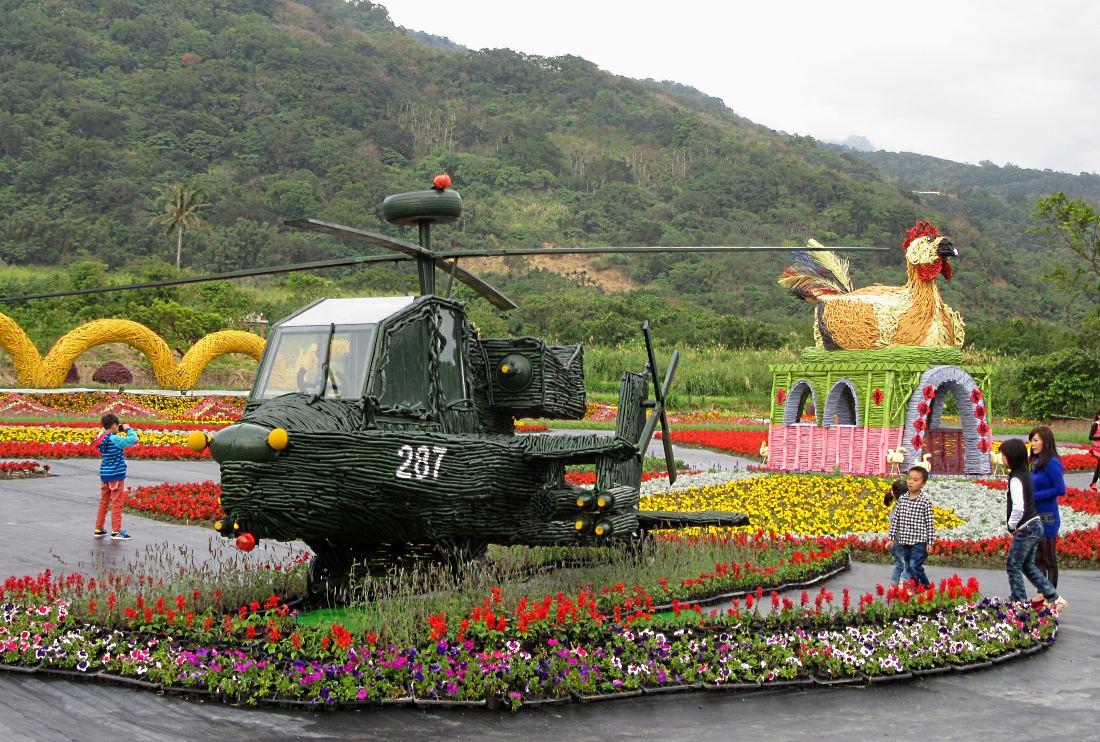 It’s New Year’s Day today, and this display of figures in a little village evidently celebrates the new Year of the Helicopter (pic). The holiday was being celebrated domestically in just about every house in every town and village: families were sitting out on the porch on plastic furniture, eating and drinking. And jovially hailing passing cyclists. I can now say ‘We are from England! We are cycling around the island! Happy New Year!’ in passable Mandarin. This is novel. Usually the first phrase I learn in a touring destination language is ‘Two beers please’.

This is the Dragon Bridge at Sansiantai (pic), an eight-arch pedestrian affair across to the islands of the Three Immortals. I bet the annuity rates they were offered on their pension were even worse than mine. 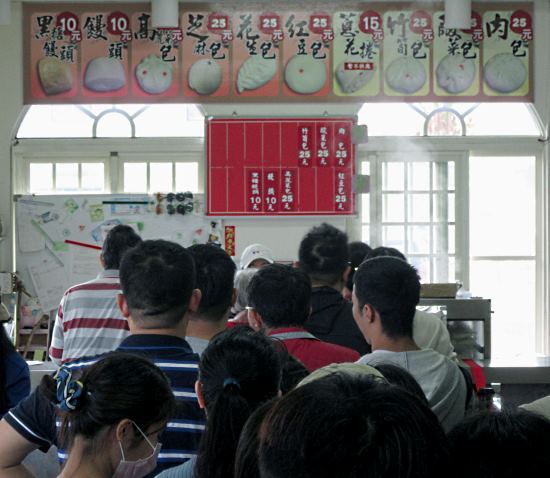 This shop was obviously popular with locals (pic) so we joined the queue and had a couple each. (One bao cost 25 Taiwanese dollars, about 65p.) 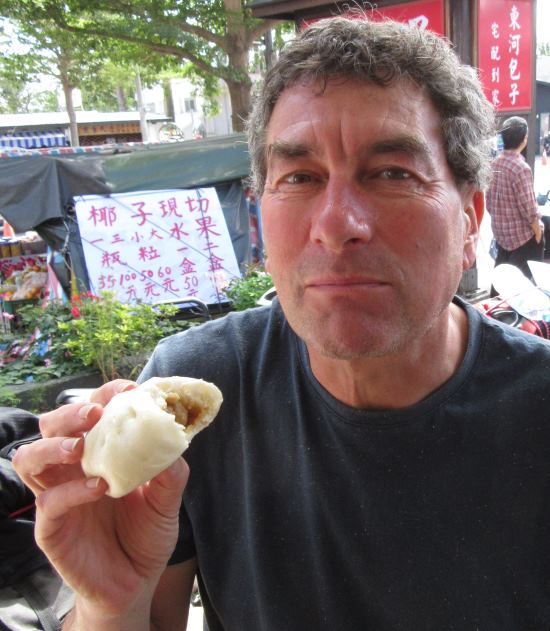 And here’s me eating one. I don’t normally like putting photos of myself up, so please try to look at the bun instead.

Tim was quick off the mark taking the picture. About five seconds later there was no bun to be photographed. 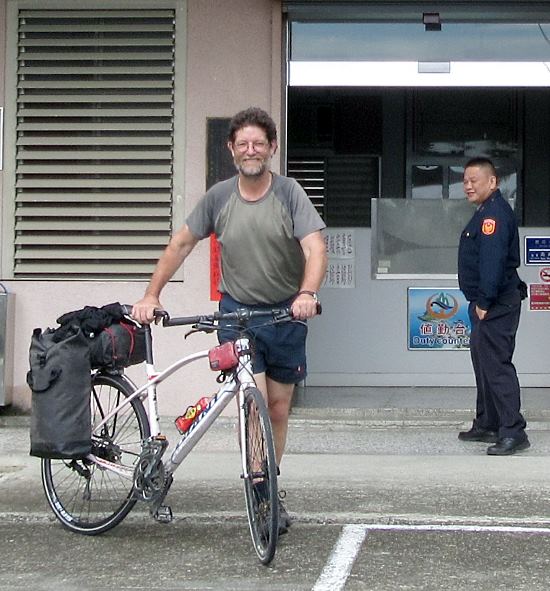 But Tim was having yet more problems with his bike. In addition to broken panniers, dodgy chain, a loose rack and rear slow puncture – here temporarily reinflated thanks to another police station’s bike toolkit (pic) – his back tyre was now disintegrating too.

As the day went on, and the tyre got more and more deformed and wobbly, it looked like he was riding a clown’s bike.
Fortunately, once we arrived in our destination of Taitung – a city large enough to have a branch of Giant that was actually open on a holiday, if several km out of the centre – Tim managed to get his bike issues sorted. 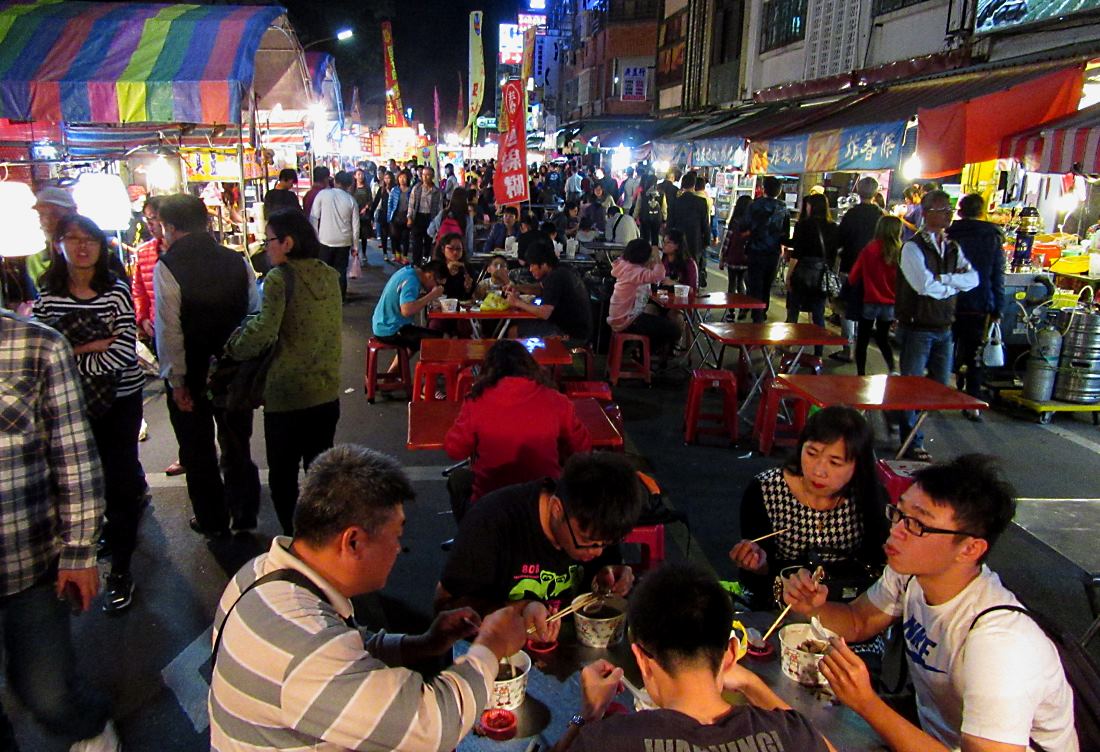 So we went out to eat with a feeling of achievement. Our evening meals out have usually been in the Night Market, an Asian speciality: a section of street or streets is lined with stalls selling all kinds of cheap and tasty food, with tables for communal use. Taitung’s (pic) is pretty typical: lively, packed, good-humoured, with maybe two or three dozen food stalls.

And, untypically, there was a stall selling beer. I can now say ‘Two beers please’ in Mandarin. Good job we weren’t cycling back though. We’ve done enough wobbling today…