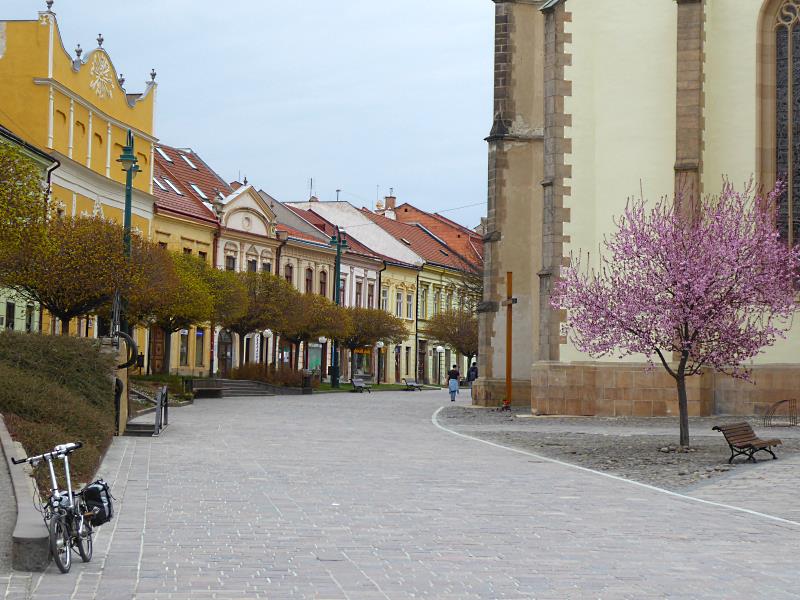 Yesterday was a day off the bike: a day of admin, laundry, sightseeing by bus (the historic walled town of Levoča), and drinking green beer. (Evidently a special, brewed for Easter, maybe? I tried to imagine hints of apple, gooseberry, mint, kale, bayleaf or new-mown grass, but it just tasted of beer.)

So I was grateful to be back riding. But it was a very strange day. Slovakia is pretty strong Roman Catholic: about two-thirds of the population adhere, and about a quarter of the population go to church regularly, though those figures are dropping. Which meant that today– being Good Friday – the roads were almost totally empty (good) but the shops were all closed (bad).

At least I had the opportunity to enjoy main roads I wouldn’t normally. No lorries, and virtually no traffic at all. I made good progress through a succession of towns and villages that were also eerily empty: Spišské Vlachy was one of many with the unsettling feeling of having arrived just after some mass abduction by aliens.

One thing I did notice more and more as I rode eastwards was the number of shanty villages and tumbledown shacks, sometimes almost next door to a set of well-to-do modern detached houses with two or three cars outside. There’s clearly poverty. And where there’s poverty, there’s often piles of rubbish. It wasn’t a feelgood sight.

With no conventional chance to buy provisions, I managed to survive on petrol station machine-coffee and a bar of chocolate all the way to Prešov, grateful that the threatened rain had proved as elusive as the population of Slovakia thus far.

I was a bit worried whether I’d find anything open at all, but I’d at least maximised my chances to avoid an inadvertent Easter fasting by contriving to pass it in Prešov and then Košice, two large well-touristed cities.

To my relief – and certainly that of my stomach – my first glimpse of Prešov’s old town through an arch perfectly framed some open pavement cafes with happy, well-fed, well-watered customers. I wouldn’t be dining solely on a chocolate bar and tap water tonight.

That said, Prešov’s handsome old town centre was still largely deserted, with all the other shops, banks and services closed. Ah, I remember when Sundays used to be like this in England…

But, thanks to the tireless hospitality industry, I ate and drank well. Slovakia, like the Czech republic, has some terrific atmospheric beer cellars, often hidden behind a modest sign and low-key door somewhere up on ground level.

Prešov proved no exception: right in the historic centre, through an entrance that seems to lead only to a kiosk selling pizzas, left down some stairs that suggest only a storeroom… there was the fabulous beer cellar of the local brewery, Prešov Pivovar, brewing vats and all. It was full of lively young people out having a great time, and now also of one tired, unshowered and less young cycling blogger, also about to have a great time.

I couldn’t resist finishing with the Chilli Beer: the first time an ale has got me looking up not only its alcohol content and IBU score, but also its scoville rating. It was pokey, I can tell you: file under Madras to Vindaloo. Cheers!