The longest mileage of the trip so far – but it felt wonderfully easy, thanks to a good railtrail, quiet flat roads, sunny but not overhot weather, and no wind. And a cream horn.

A good, 21st-century standard, segregated cycleway took me out from the centre of lovely Toruń, eventually turning into a surprisingly good, smoothly-tarmacked railtrail (pic).

I was making excellent, fast progress. In fact, in the time it took me to do 12km, I only moved from No 12 to No 11 in the phone queue to make an appointment with the doctor back home in York, so I gave up. By the time I fix one up, I’ll be either cured or dead.

In the small town of Unisław I had breakfast: a cream horn, which wasn’t real cream (it was buttermilk), and wasn’t a real horn (it was made of pastry, not brass), but was plenty tasty and saw me through the morning. 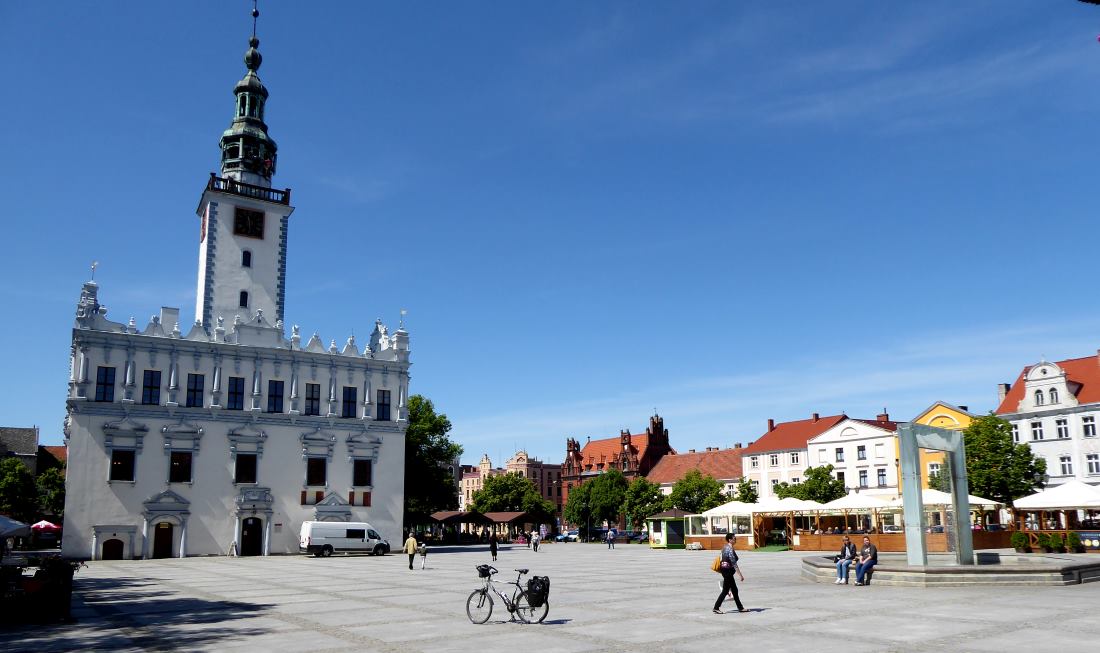 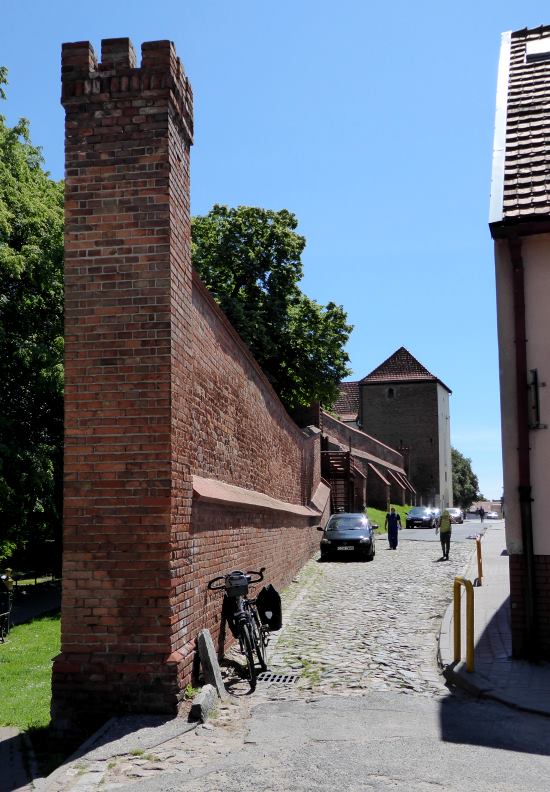 I cycled round Chełmno’s famous city walls (pic) which are almost intact.

Though that’s hardly surprising, as they were built by Polish builders out of brick (pic).

They probably worked bank holidays to finish it on time. 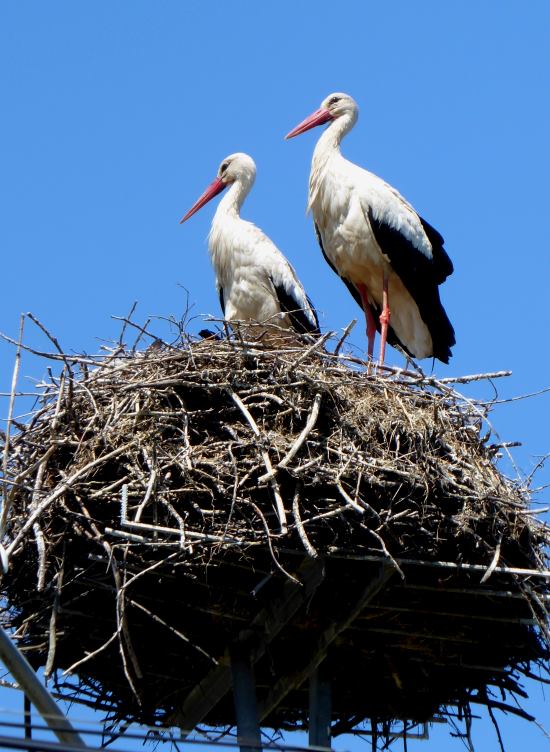 Hurtling along the cycleway north from Chełmno, I stopped to admire a couple of storks’ nests.

The first had a parent feeding its chicks, the second (pic) this pair.

I saw plenty more wildlife on the road today, including a fox, a shrew, a grass snake and several species of snail, but unfortunately they were all, er, dead and, um, squashed.
The WTR (Wiślana Trasa Rowerowa, ‘[River] Vistula Cycle Route’) is a bit makeshift, and rarely gives you any views of the river itself. It struck me as a dutiful but unconvincing attempt to copy Germany’s wonderful river routes: unlike there, the Vistula has no towpath (so you have to take roads out of sight of the water) and as Poland is so flat there’s no scenic benefit or hill-dodging advantage in following the ‘river valley’ (so you may as well take any old A to B route). 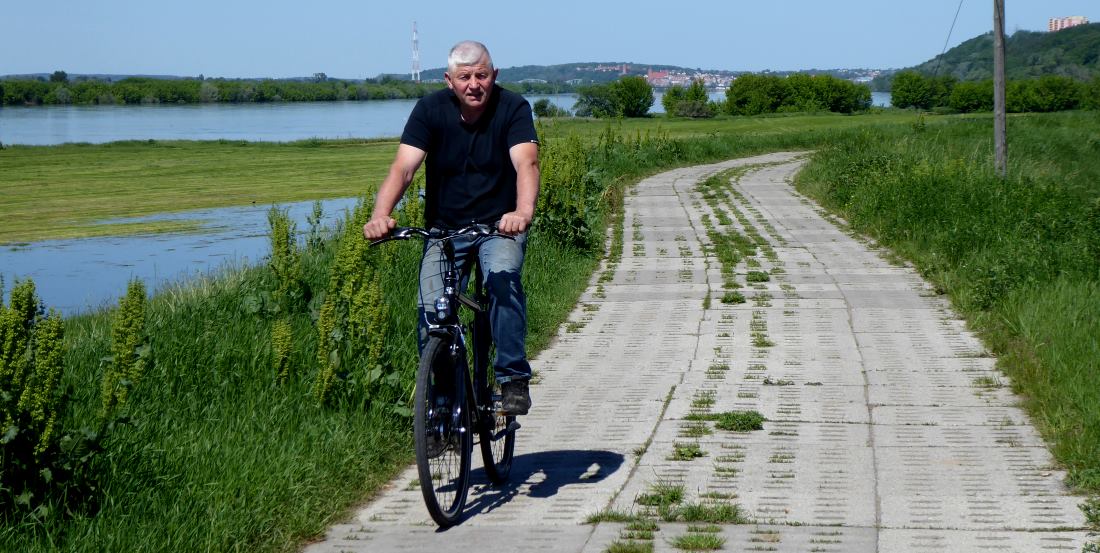 Still, on the approach to Grudziądz, the route did take us up on to a rough flood-bank-top track, giving rare but sweeping views of the river, swollen big time by recent rains (pic). Several families (some members in swimming costumes) and cyclists had come here to rubberneck the high water. Which is more a comment on how much there is to do round here, rather than the severity of the floods, I think. 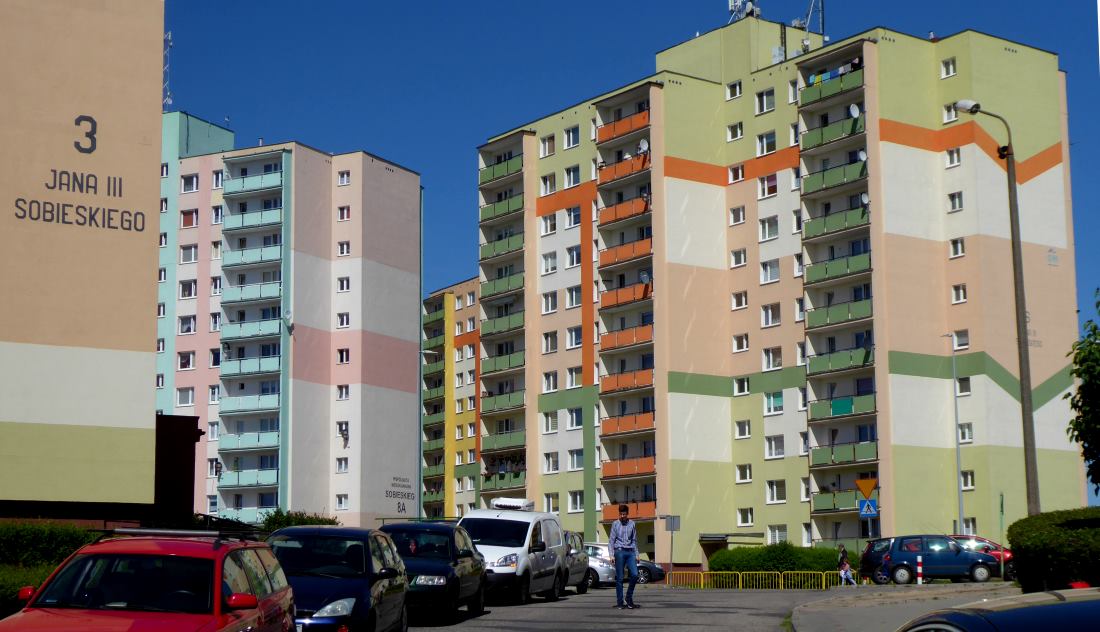 As I cycled through the suburbs, I was mildly uplifted by the lively colour schemes of the blocks of flats (pic)…

…and even more uplifted by this riverside bar by the entrance to the old town (pic). There’s something very satisfying about sitting in the sun after a decent day’s ride a few minutes from your accommodation and watching liquid flow rapidly.