Probably the best ‘cycle touring’ day of the cycle tour so far. In other words, a day that demonstrated what cycle touring is really for.

No, I don’t mean making friends and relatives at home jealous with Facebook posts. I mean a varied and unfolding day of weather that got better and better, of lanes and landscapes that got more interesting, and of coming upon hitherto unknown places by chance that turned out to be delightful. And cakes. And all enhanced by experiencing it on two wheels.

I was pleased to depart from my rather drab, cheap, wifi-less, industrial-estate hotel in Włocławek very early, around 7am. It’s clearly a working-blokes’ sort of place: lots of men in grubby work clothes leaving for another day’s hard graft. So I felt I belonged, because so was I.

Just up from the hotel I joined the WTR (Wiślana Trasa Rowerowa, ‘[River] Vistula Cycle Route’). This is a 230km signed trail alongside the river which I’ll be following, on and off, from now to Gdańsk in a few days’ time. It’s no Danube Path – but then, where is? – and feels a bit half-hearted in its execution, but it’s a mildly interesting and useful basis for route-planning.

It started with a splendidly industrial feel, routing me through chemical works, bitumen plants, fertiliser factories and goods-train marshalling yards (pic). Which I love, I really do, so long as it’s only one element of a varied mix: part of the joy of cycle touring is seeing a place in all its reality, from humdrum industrial areas to beautiful scenic idylls… 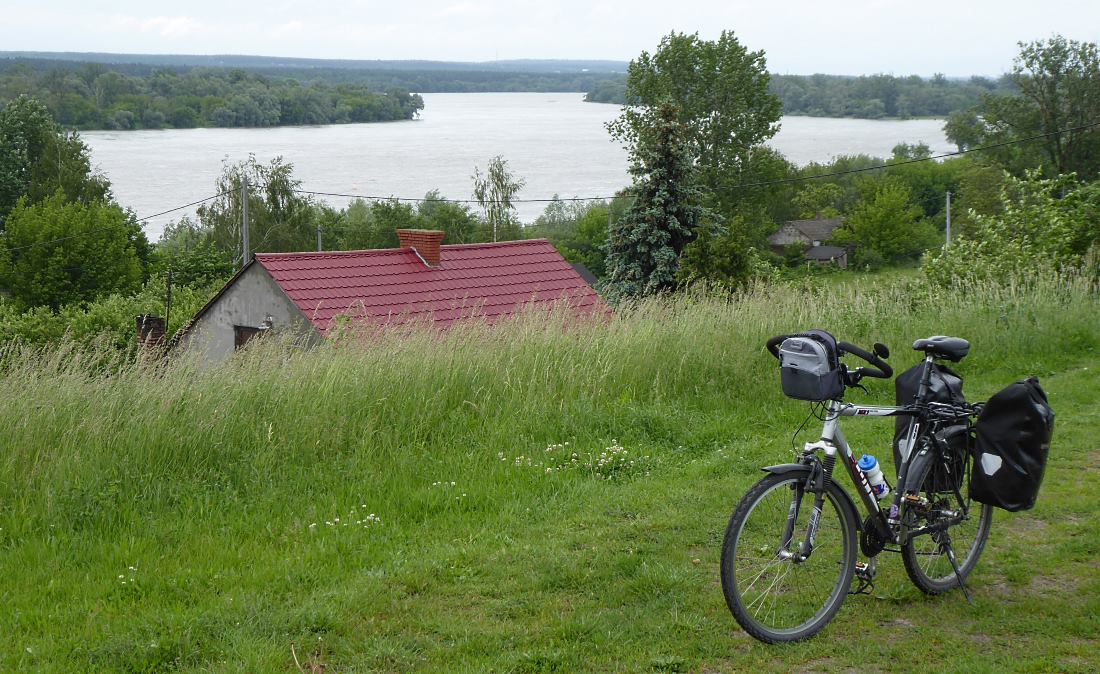 …beautiful scenic idylls not featuring strongly in rural Poland, of course. But, after a week of rather monotonous flat farmland in which the only entertainment was to watch the wind turbines rotating, at least I was now beginning to get some variety in terms of river views (pic). 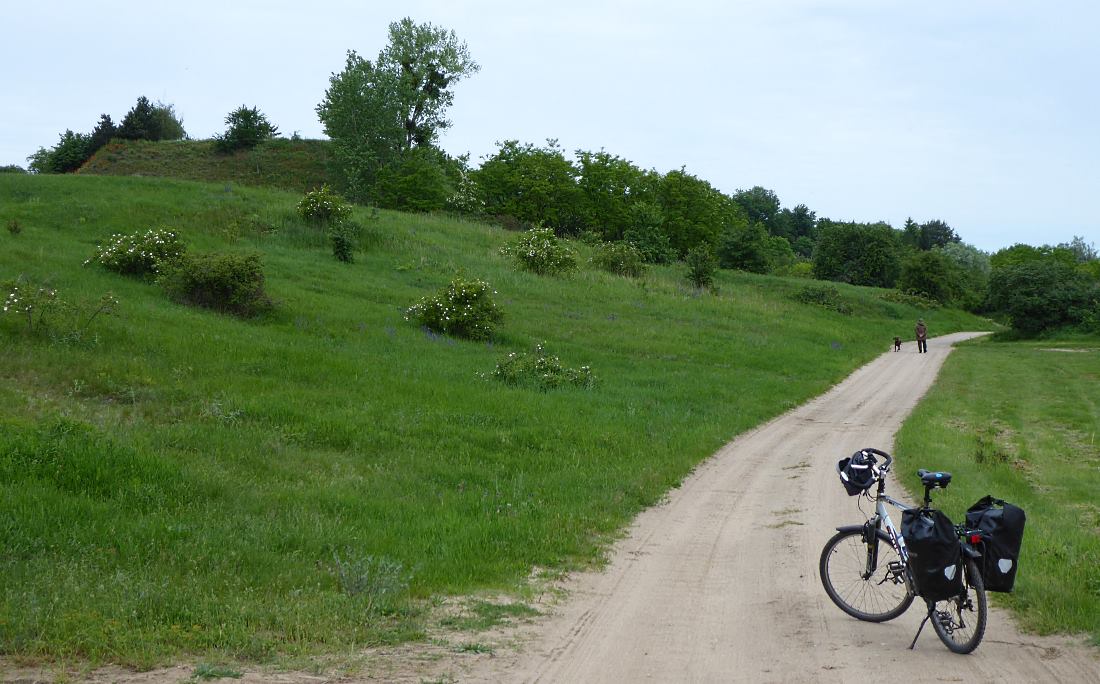 The WTR took me along several tracks (hooray for my trekking bike etc) which looked almost English at times: this sandy scene (pic) could have been on the East Anglia, East Yorkshire or Lancashire coast. 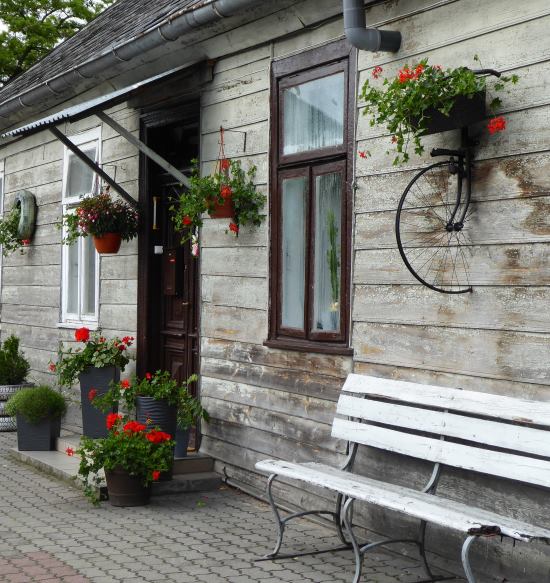 The headwinds gradually abated, the sun gradually came out, and the sugar rush from the doughnut I bought from a tiny local sklep gradually kicked in.

…and relieved that I hadn’t planned a route that involved the town’s ferry across the Vistula (pic). Following heavy rain, the river is very high – they’re talking floods in Warsaw – and the boat wasn’t running today for obvious reasons. 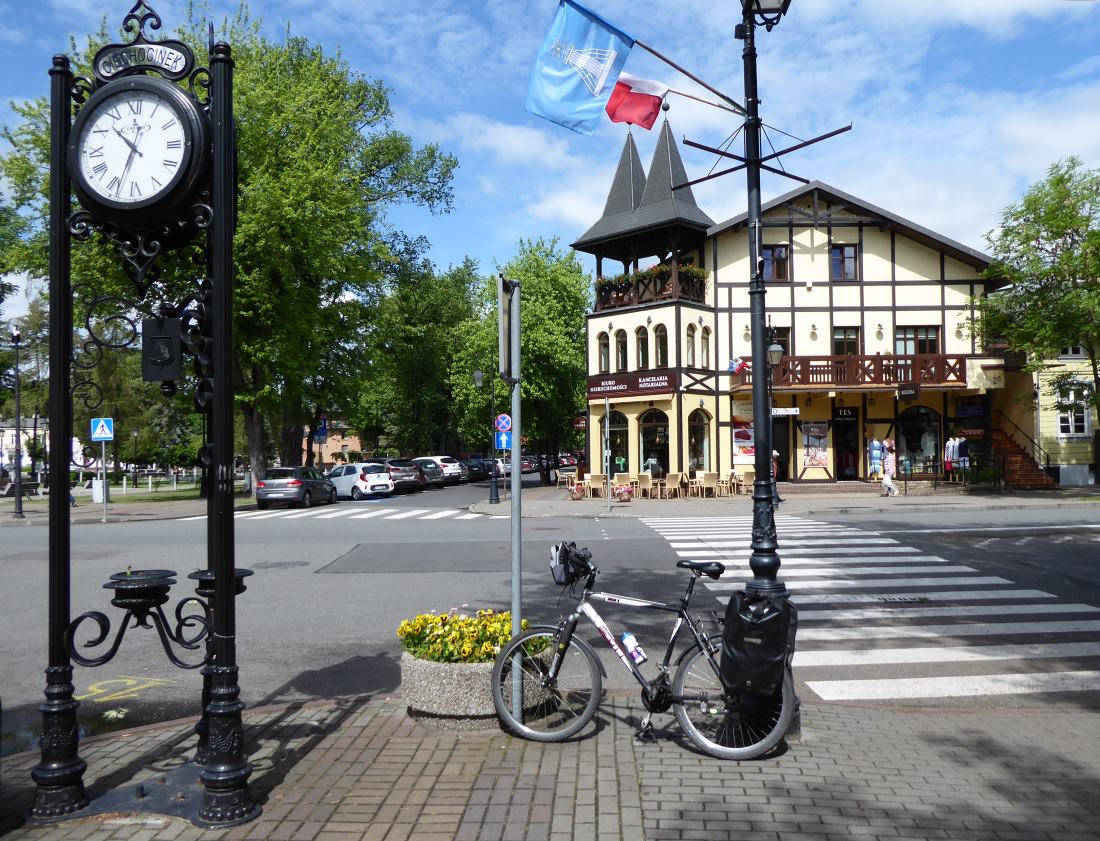 A pleasant surprise awaited me in Ciechocinek, merely a place on the map for me until I arrived in the sun. It’s a spa town, popular with domestic coach parties strolling its pleasant gardens, pedestrianised streets and parks. Which means that, unlike most Polish places of this size, there were plenty of cafes and cake shops (pic). Well, what’s the point of knowing a bit of refreshment-related Polish if you don’t use it…? 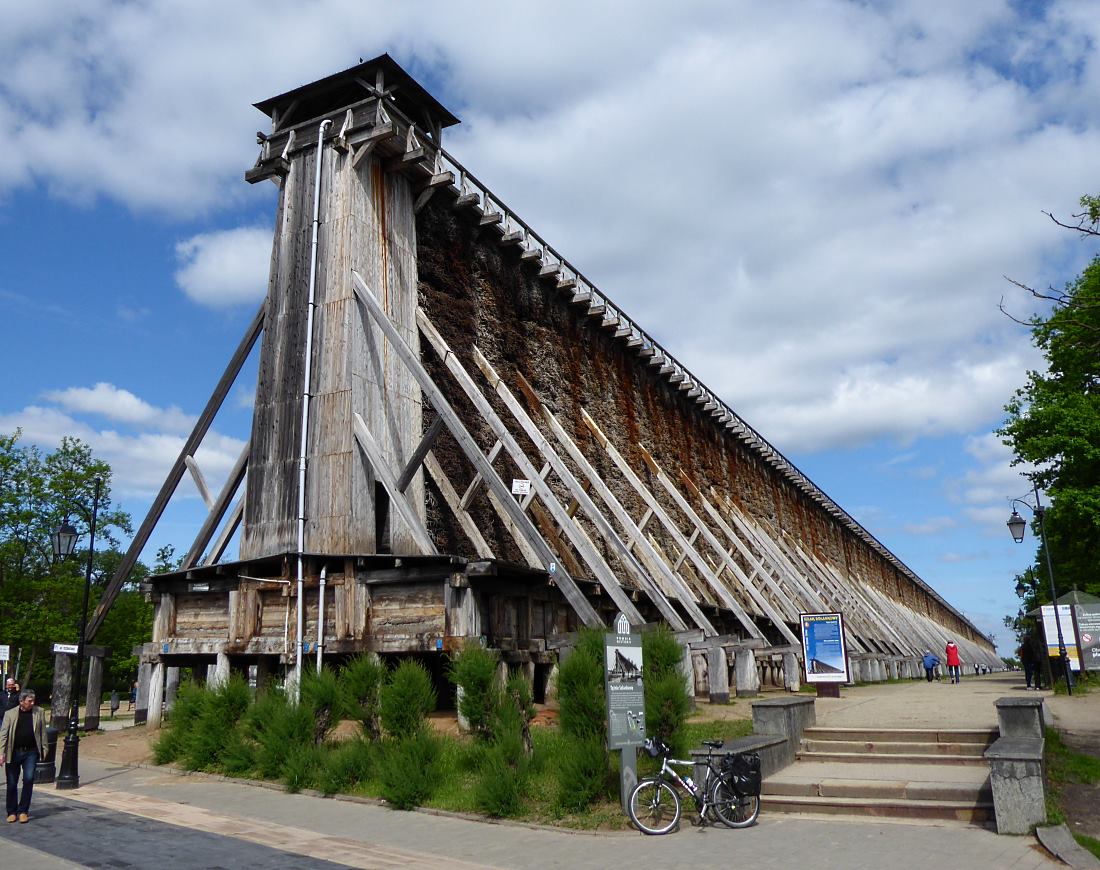 I like serendipity, especially when you come upon it by chance. Ciechocinek, it turned out, is famous for these things: yes, you guessed, brine graduation towers. They’re special towers which graduate brine. And these ones here are, indeed, the world’s biggest. In fact, they graduated more brine than any other towers. Quite impressive indeed; I’d thought they were watchtowers and the remains of some politically divisive wall.

Also admiring the wall I saw the only other cycle tourist I can remember all trip. I didn’t get the chance to talk to him because he saw me first. 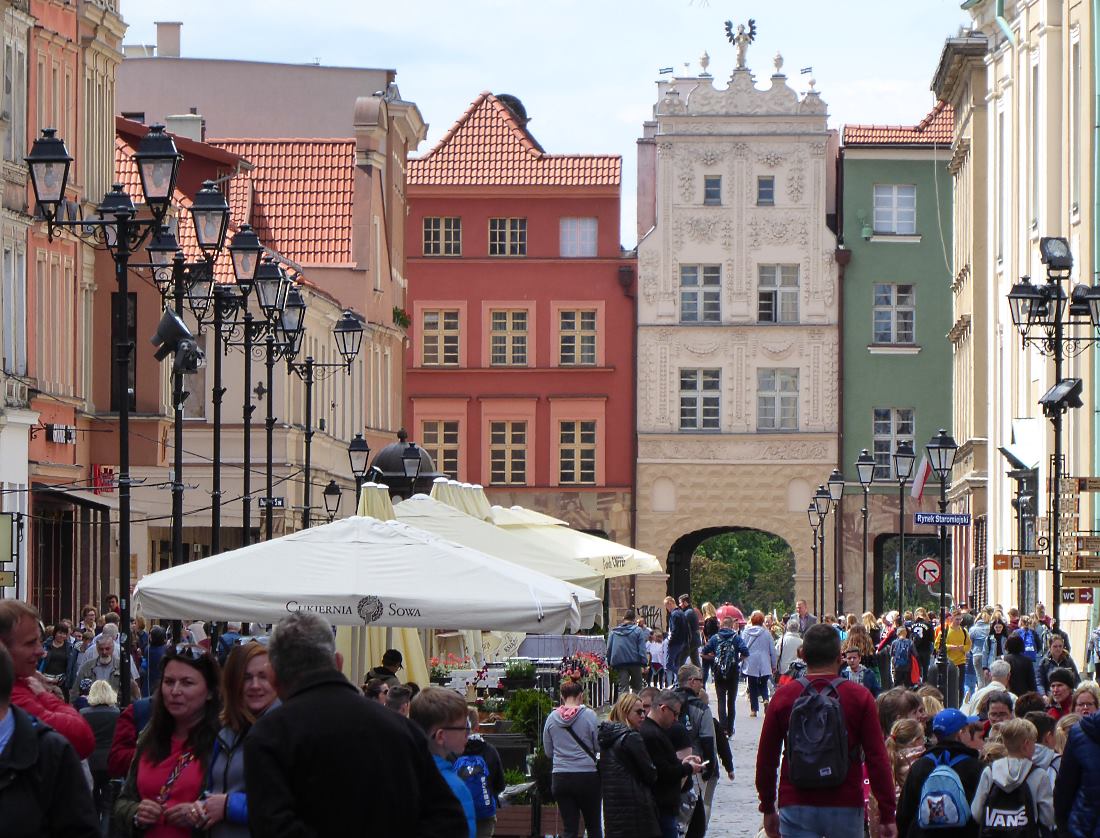 And so – by some lovely tracks through woods, some fast pleasant wide hard shoulders on main roads, and some impressive new segregated infra taking cyclists over the Vistula – I arrived in beautiful Toruń (pic), home of both Copernicus and gingerbread. 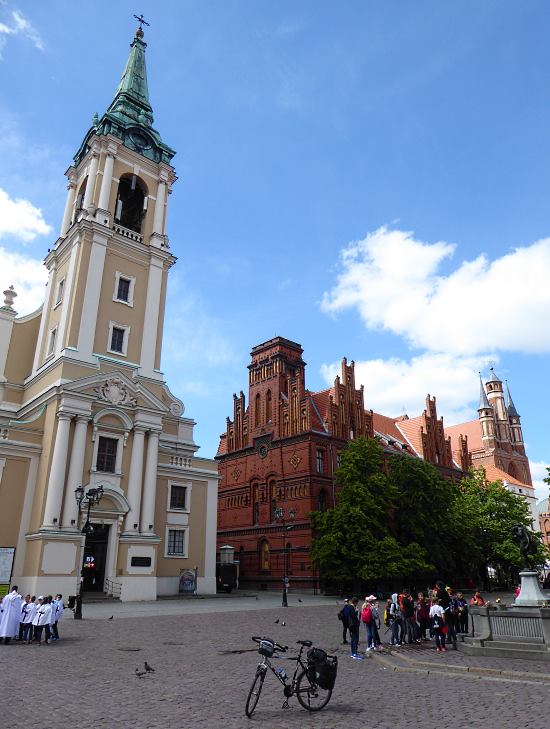 Thanks to having escaped the bombs in World War II, the extensive old town (pic) is an absolute treasure: a UNESCO World Heritage site, and one of Poland’s Seven Wonders, of which I have now seen six.

I visited the fascinating Copernicus Museum, in the very building where Dr Nick was born in 1473, or perhaps somewhere else. I knew that his 1543 book De Revolutionibus had shaken up mainstream religion by asserting the earth revolved round the sun, not vice-versa.

But I didn’t know he had also anticipated ‘Gresham’s Law’ (‘bad money drives out good’, an effect familiar to all Premier League football fans). The museum is free on Wednesdays, which saved me 15 zlotys, which I therefore spent on a kebab. I don’t know if there’s a financial law describing that effect.

Earlier on in the day I’d passed a distillery called Copernicus. It made me wonder if the fearless astronomer had got his inspiration for heliocentricity after overdoing the vodka one night. And realising that the room was not, despite appearances, revolving round his head.
Miles today: 41
Miles since Polish border: 390