I’d planned a short day. I’d had vague aspirations of stopping off en route to walk up Snowdon, assisted by the rack’n’ruin railway. Unfortunately the train was only running part way up, so I wouldn’t have time for any summit-bagging today. 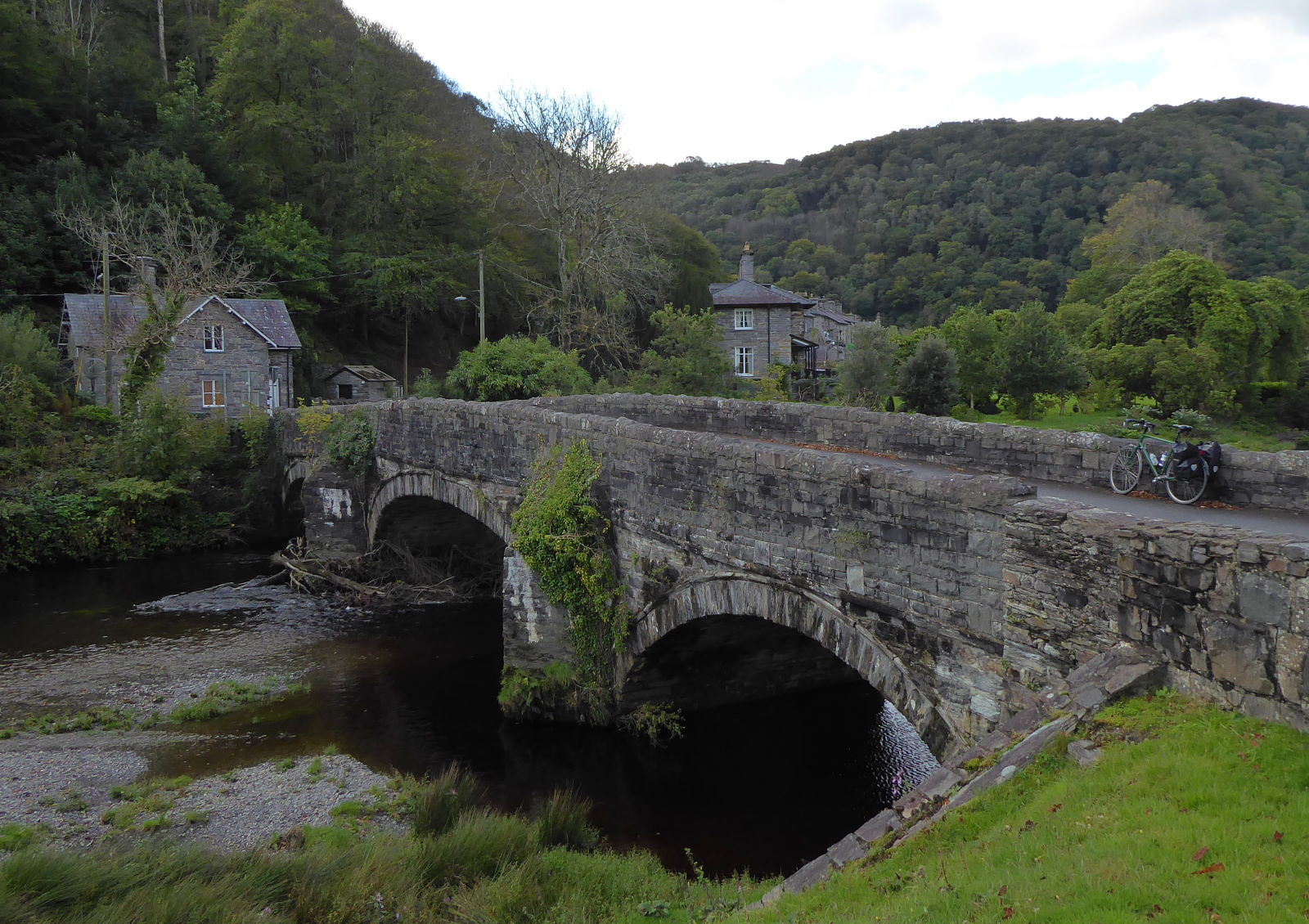 It was a swoosh down from Ffestiniog to the valley floor (pic) and a quiet B road back up to join the course of the Ffestiniog and West Highland Railways, also restricting services right now. 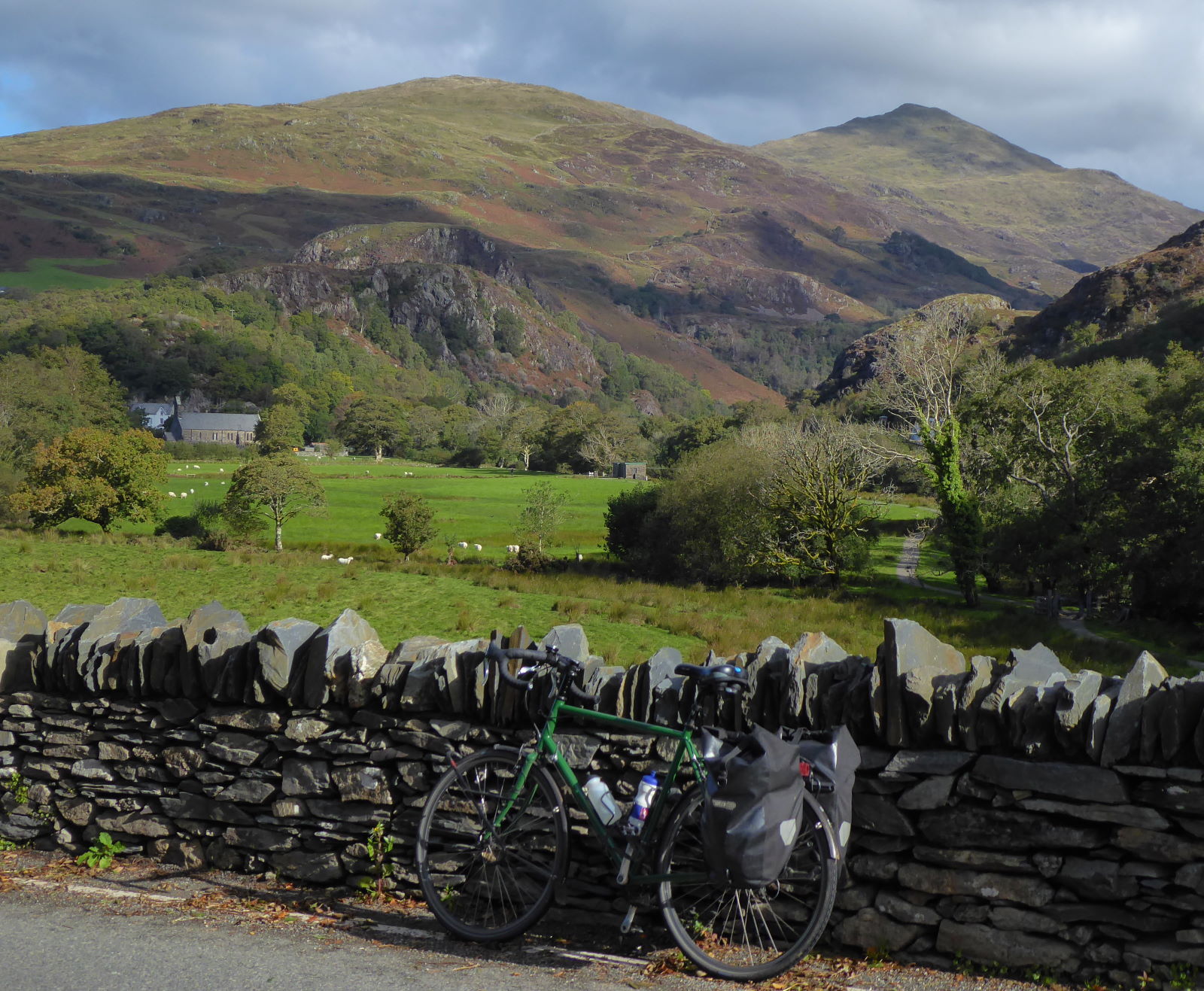 Eventually I joined the A4085, one of those delightful ‘main roads’ that’s actually not even a B really, often slimming down to singletrack-with-passing-places. It’s fairly flat and slices through some splendid Snowdonian mountainscapes (pic), with fine views of Eryri’s summit itself.

In Beddgelert, surrounded by peaks, the scenery took my breath away. As did the price of a coffee, though it was nice to sit and enjoy a boost in the sunshine. 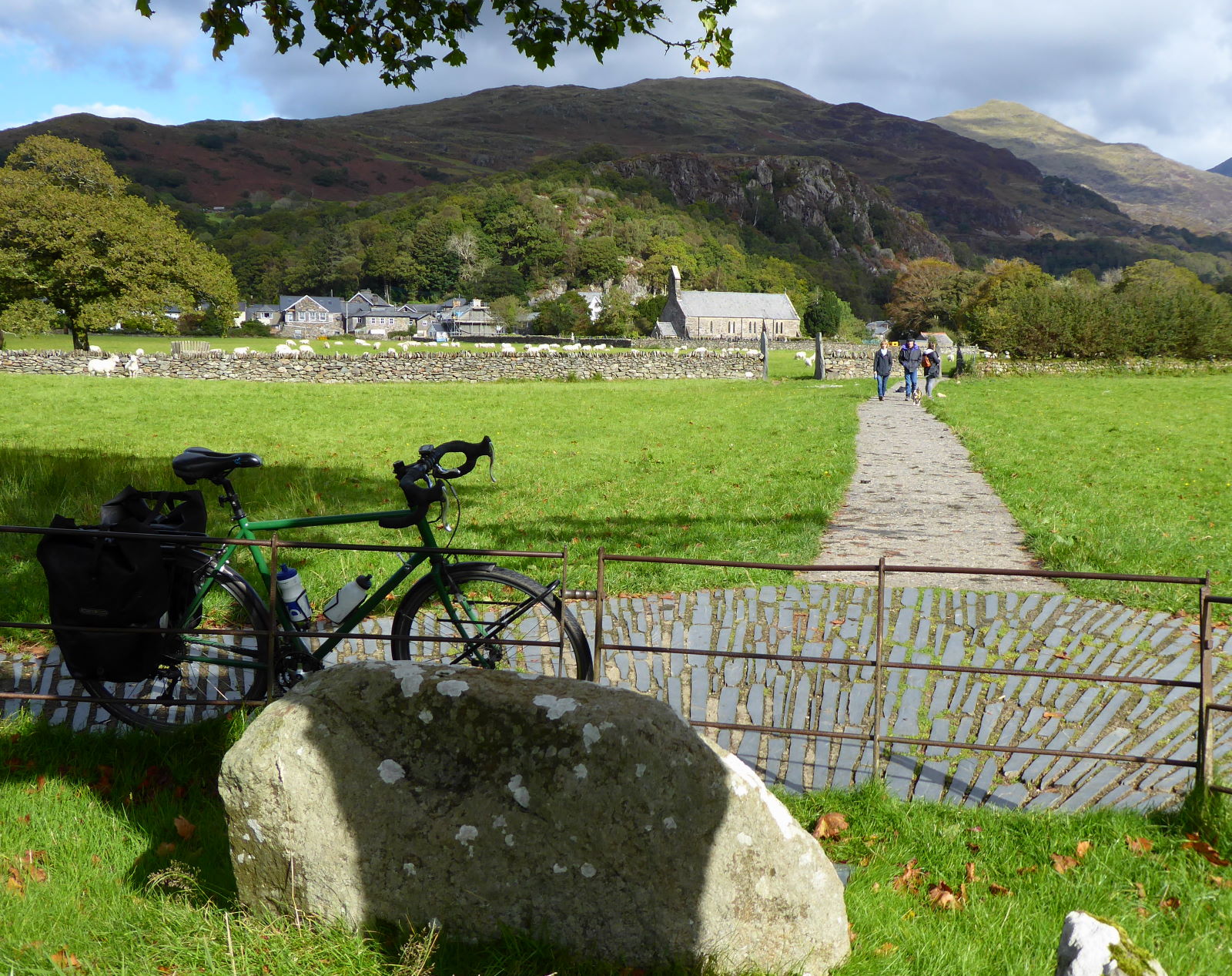 Unlike those, however, Gelert didn’t outlive his master. Quite the reverse. His owner, Prince Llywellyn, came back from hunting one day to find his son’s crib empty and the dog covered in blood. Assuming the dog had savaged the boy, he killed it in rage… only to see his son toddle happily from round the corner, where there lay the dead body of a would-be child-stealing wolf that Gelert had just killed.

Prince L was grief-stricken, and apparently never smiled for the rest of his life. Like the woman in the village shop later on where I bought a pork pie. The story is just a story, of course – similar brave but luckless folk-tale dogs, have been slaughtered in error all over the world. Gelert was no more real than the ‘cream’ on my pot of trifle from that village shop. 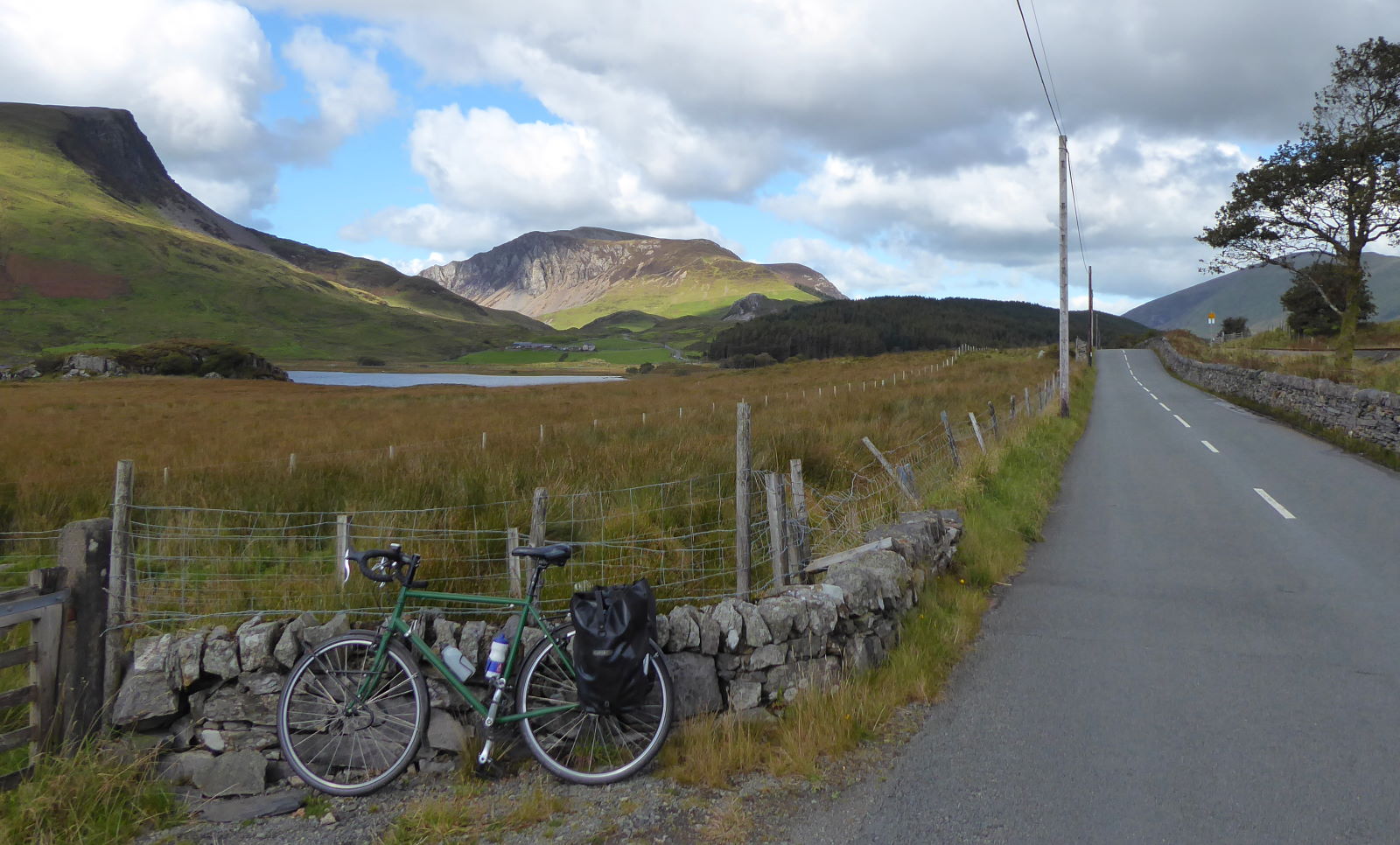 I could enjoy the scenery at leisure, because the road was almost devoid of traffic: it was all stuck behind a line-painting lorry just outside Beddgelert. 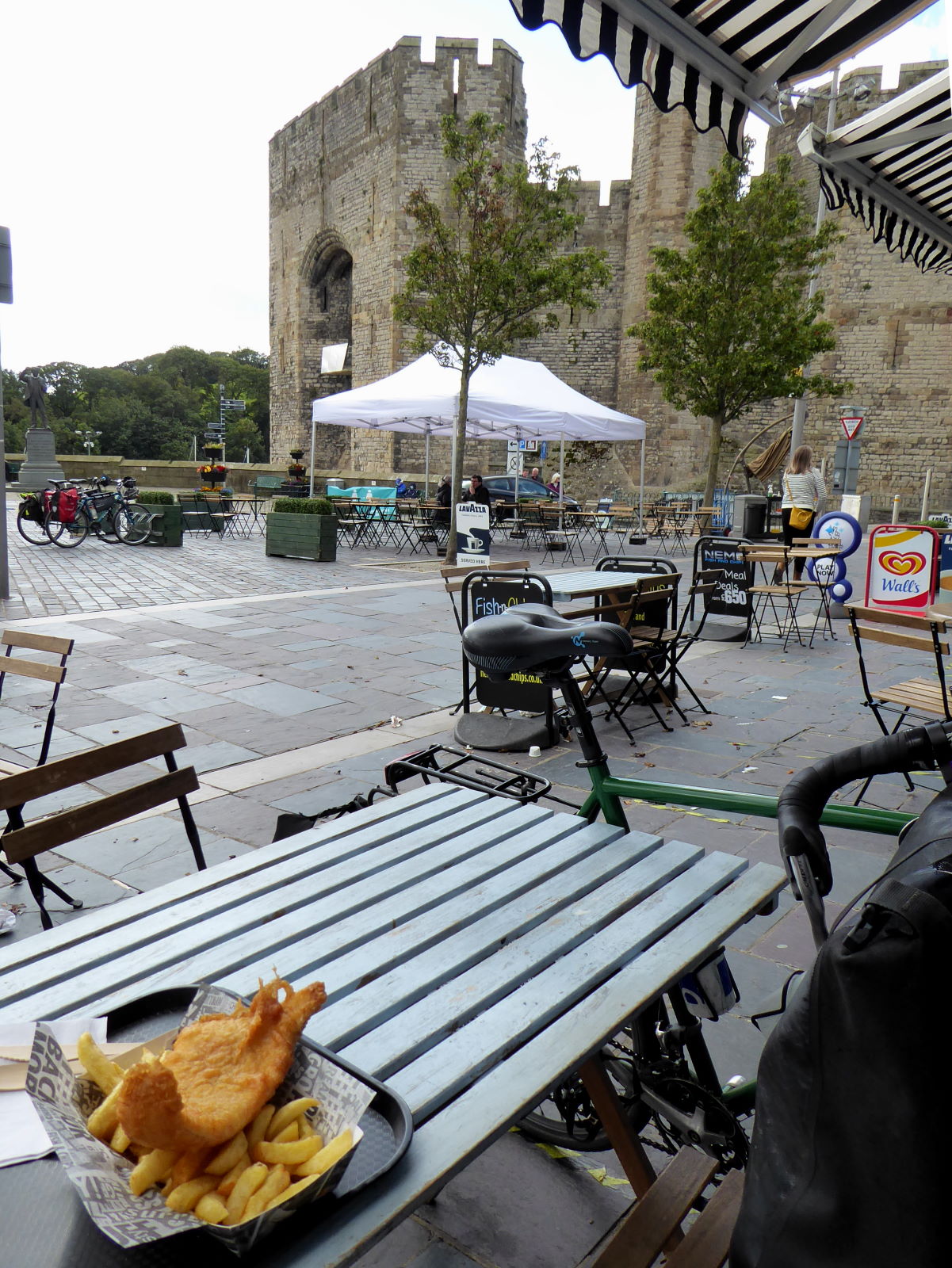 I got to Caernarfon for a late lunch of fish and chips in the central square (pic).

I was right opposite the castle and statue of David Lloyd George in full orator mode, probably railing against the low-quality cod. 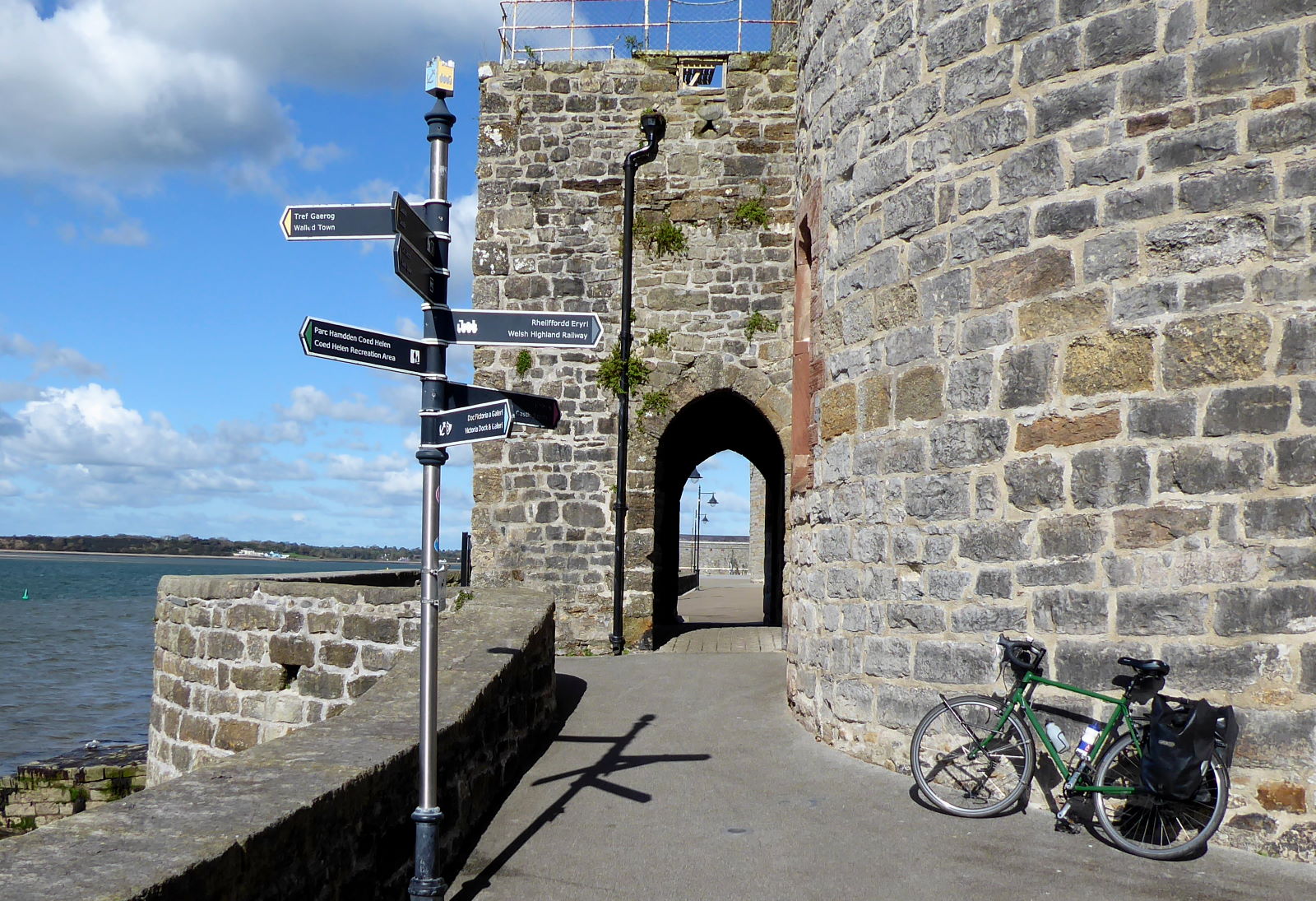 From Caernarfon it was almost all along the Lôn Eifion, a pleasant riverside path-cum-railtrail (pic), to Bangor, where I settled into my Premier Inn with a real feeling of getting away from it all.

That’s because there was no internet and no mobile phone signal, and hence no way of contacting the outside world. To talk to reception, you had to walk there, which wouldn’t have been terribly convenient if, say, there was a mad axeman trying to get into my room.

I had a lucky escape from any crazed samurai by swigging a pint of soulless lager in the resto-bar opposite, in order to use their wifi.