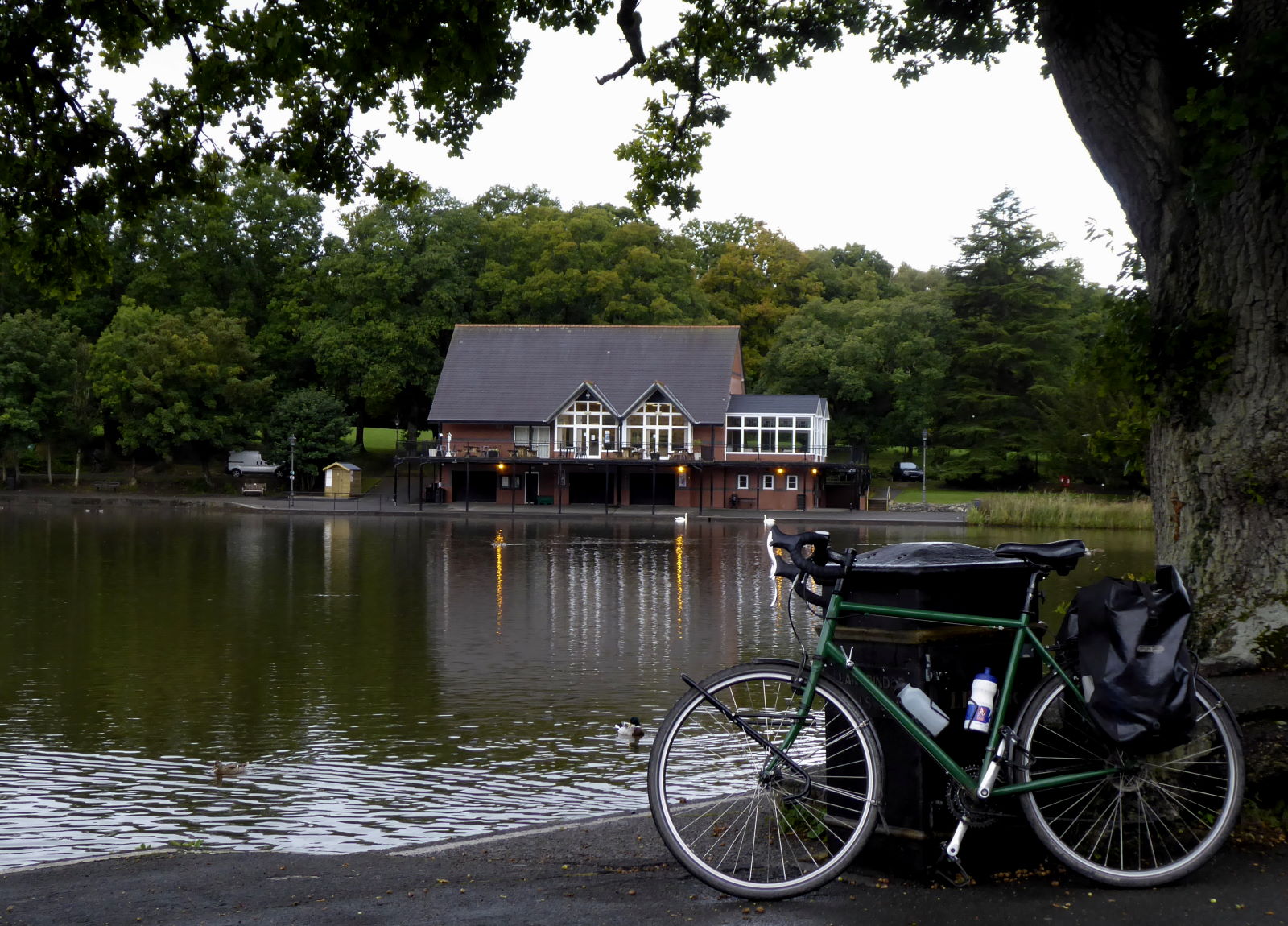 I had a quick morning spin around Llandrindod Wells’s lake (pic). Locals proudly told me about the new cycle path around its kilometre or so circumference. ‘Cycle path’ sounds grander than it is, which is a solid-line lane marked off from the perimeter road, but it’s wide and pleasant enough.

LW is a Victorian spa town, and amiably feels that way. I could easily picture late-1800s families pleasure-boating here, and penny-farthings jostling for space on the perimeter path with those new-fangled Rover Safety Bicycles. Talking of which… 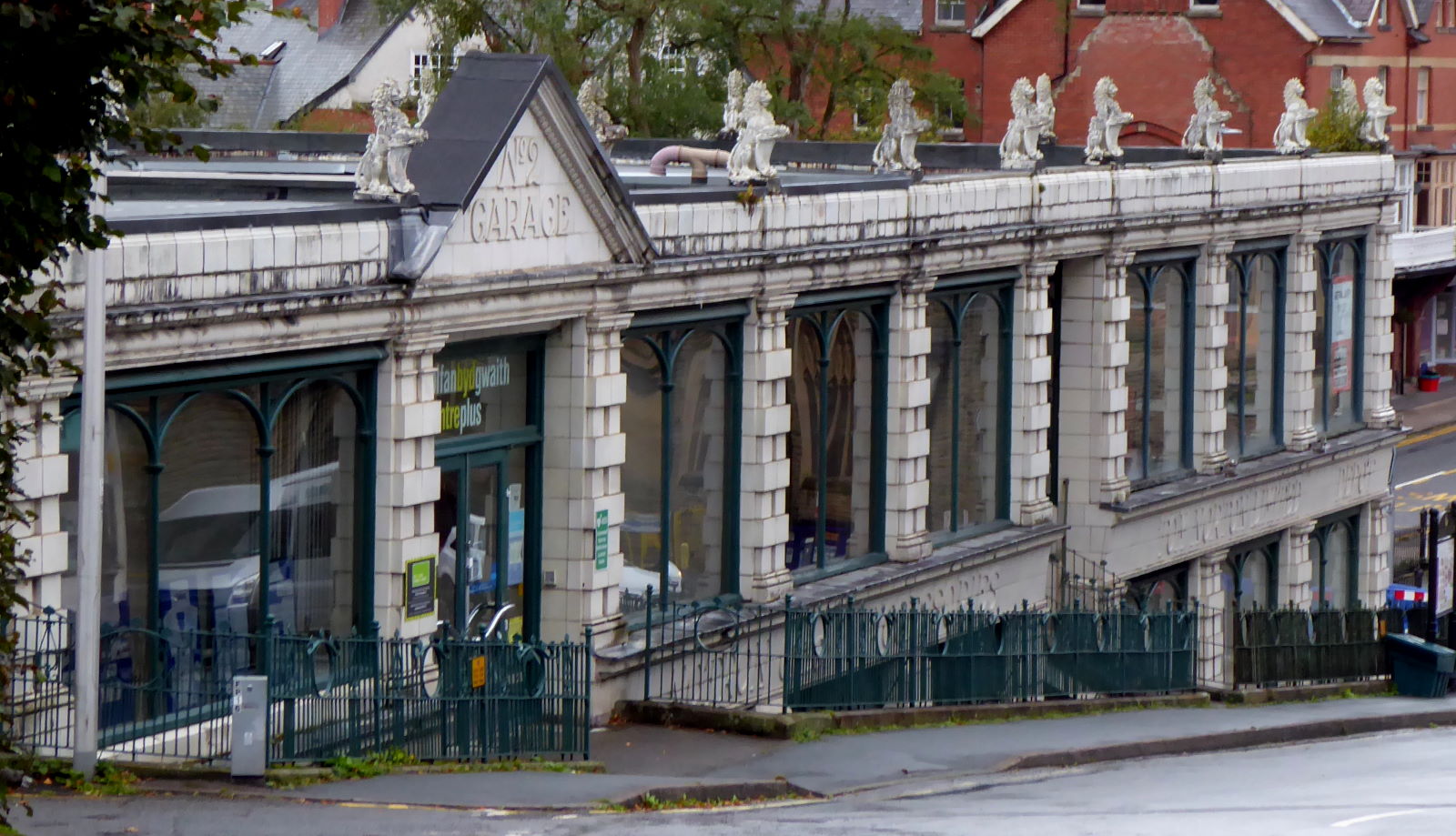 …My main target for the morning was the National Cycle Museum. What it’s doing in this remote part of mid-Wales is anyone’s guess, and I can’t even guess. The building is impressive: a former motor garage, built in pioneering art-deco style circa 1910 (pic). 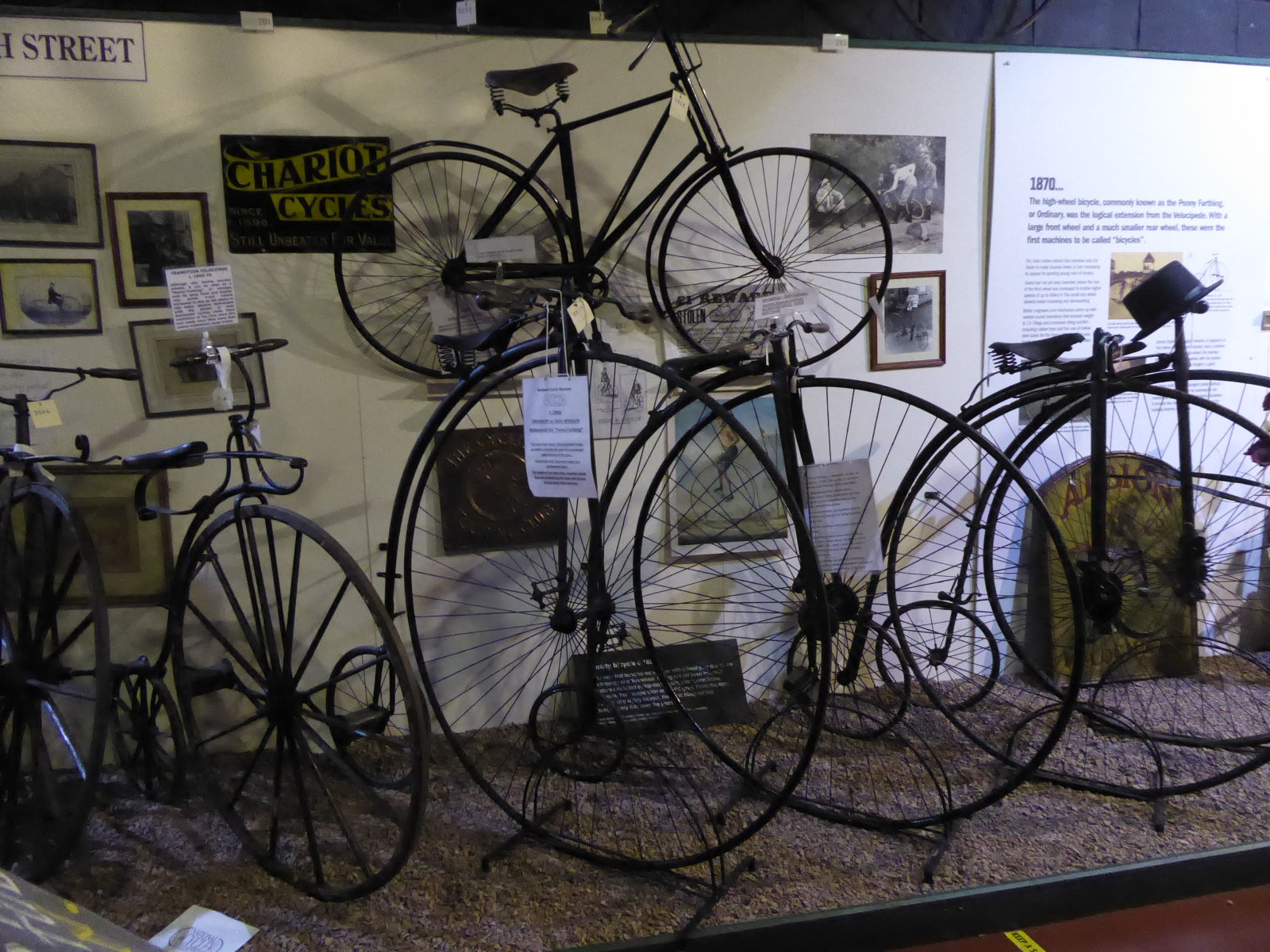 And the contents are even more impressive. The handful of rooms on the ground floor are crammed full of bikes, bits and memorabilia of all kinds from the velocipede era to the 1990s (pic). There are unusual Ordinaries, antisocial Sociables, dangerous Safeties: there’s even a bike made out of a bedstead. 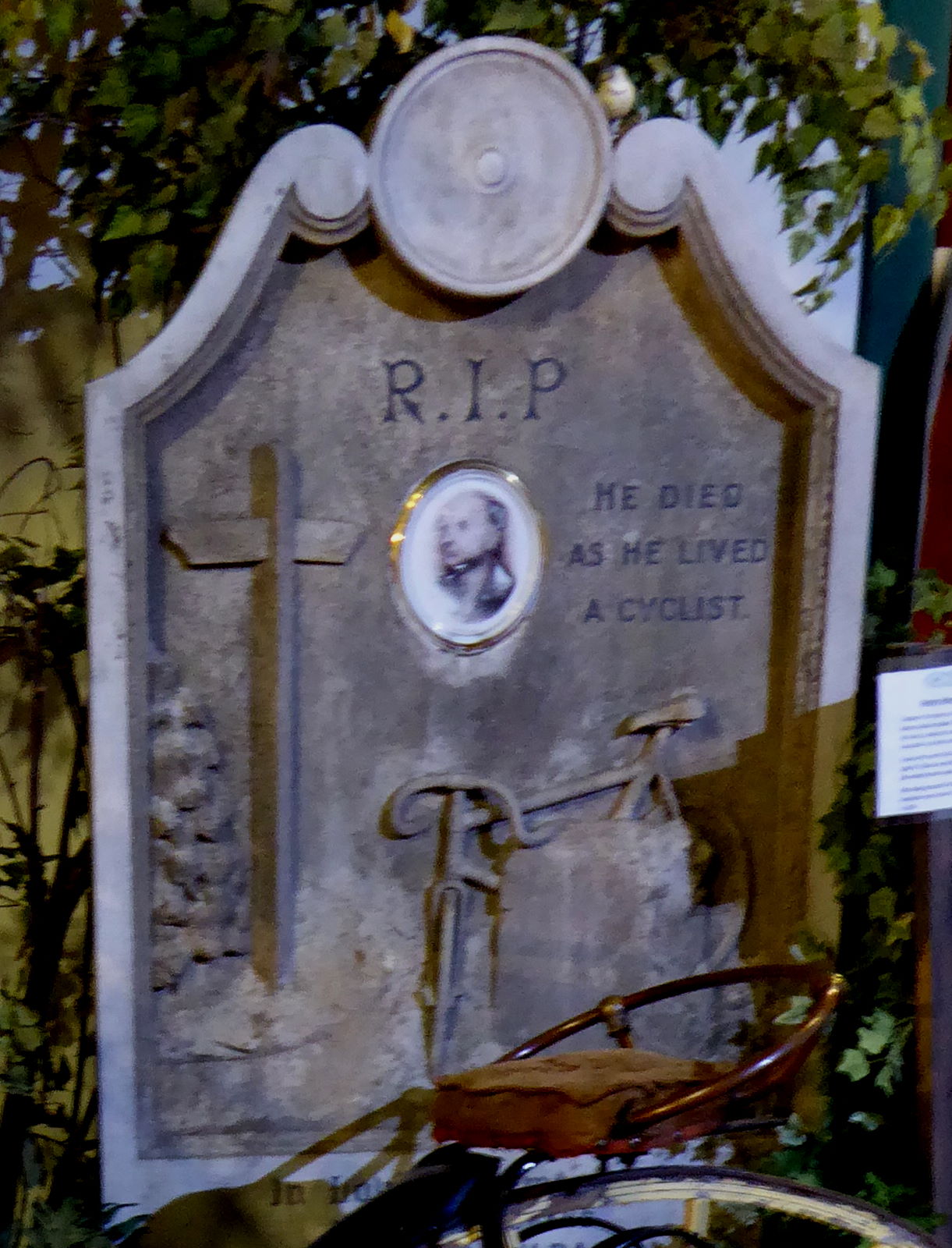 It’s a glorious jumble, roughly but approximately chronological. If it looks like it’s done on a budget, with its engagingly amateur information cards, that’s because it is – the friendly staff are volunteers – but I spent two very, very happy hours here. 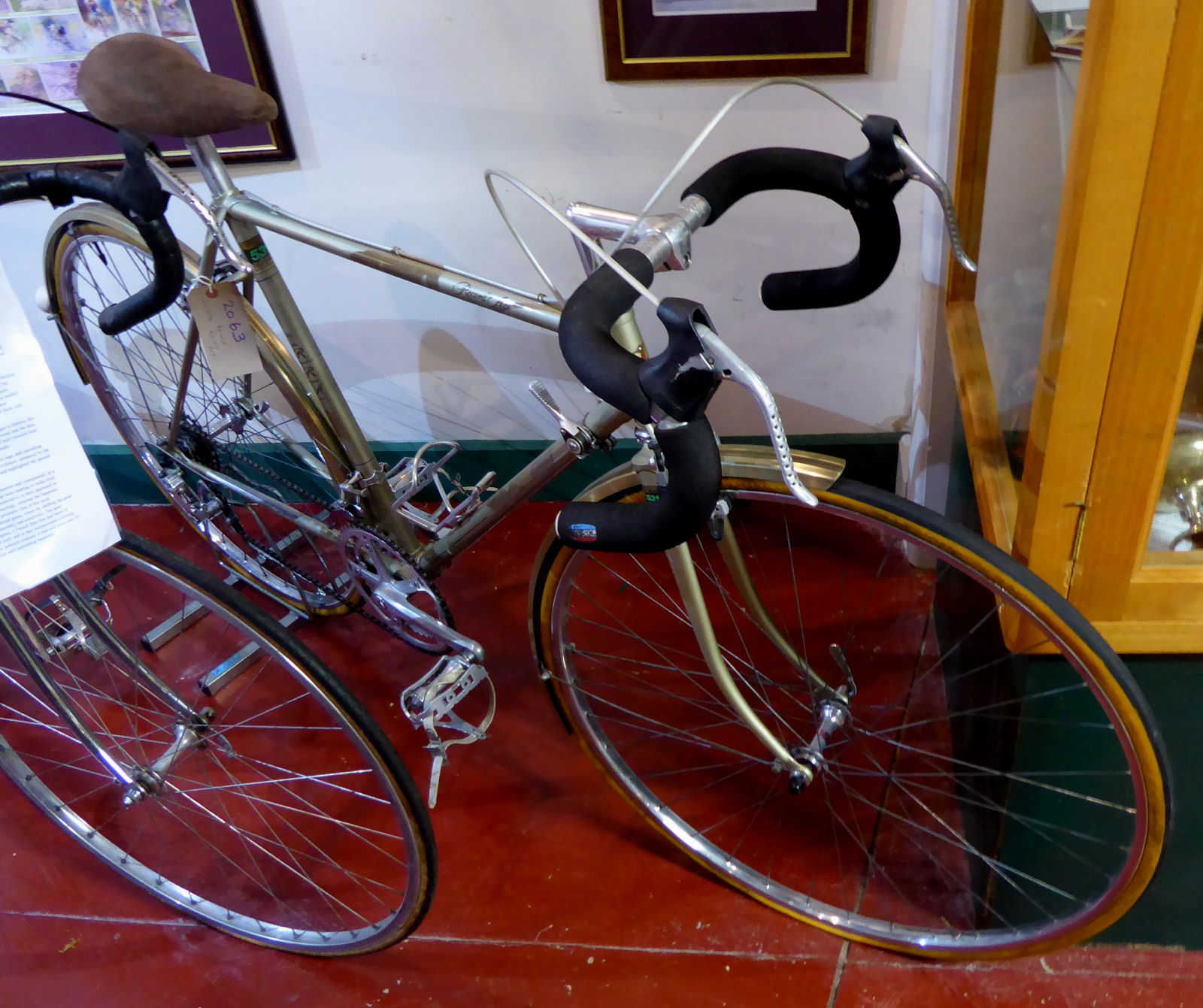 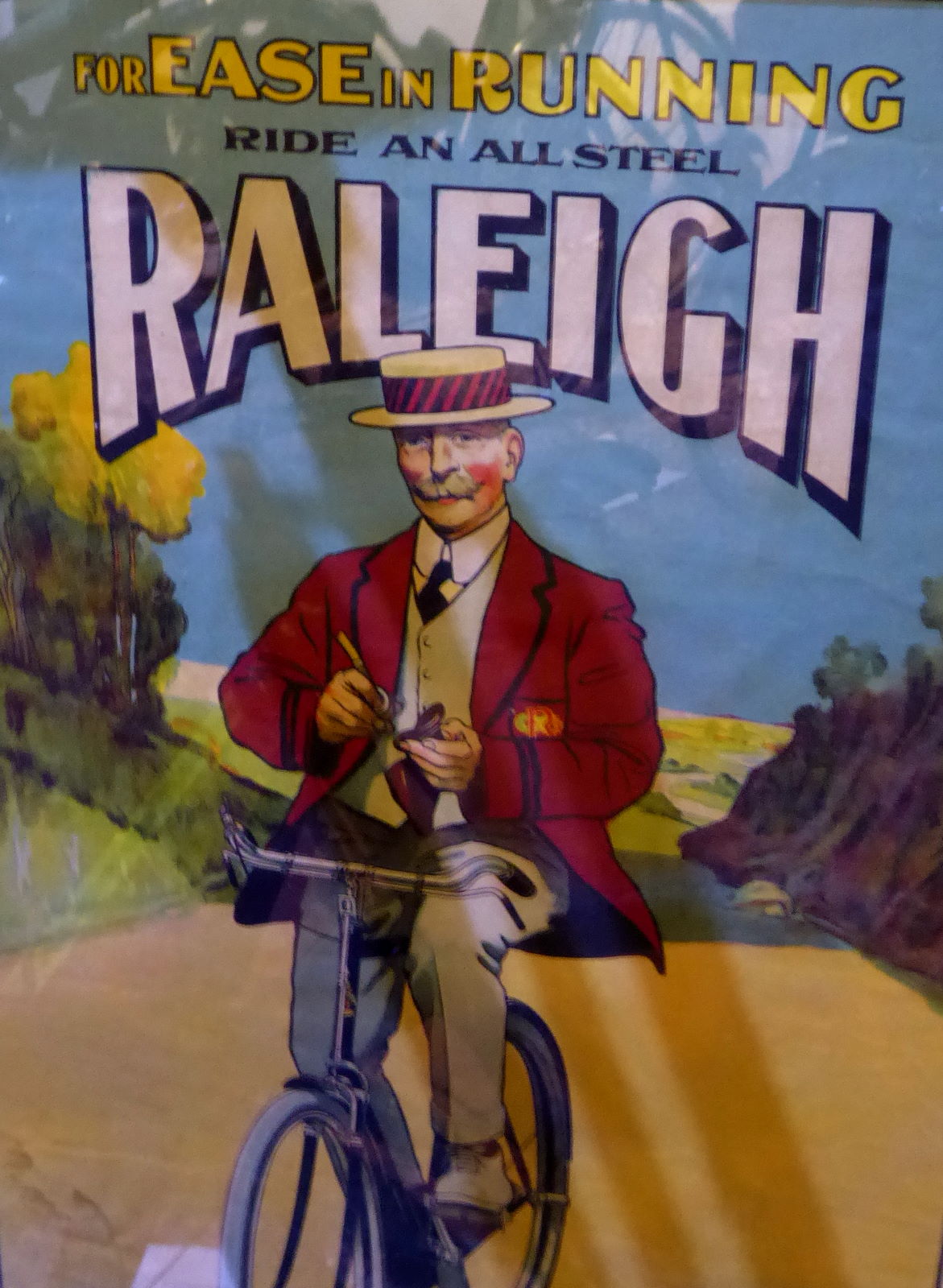 I might almost have suspected it was my machine, but it wasn’t, because mine was crushed by a lorry in Southwark in 2002. Don’t worry, I wasn’t riding it. It was locked to a lamppost.

Here’s a MAMIL, 1910-style. I expect people were chuntering even back then about these young tearaways, recklessly FILLING THEIR PIPE as they rode along. 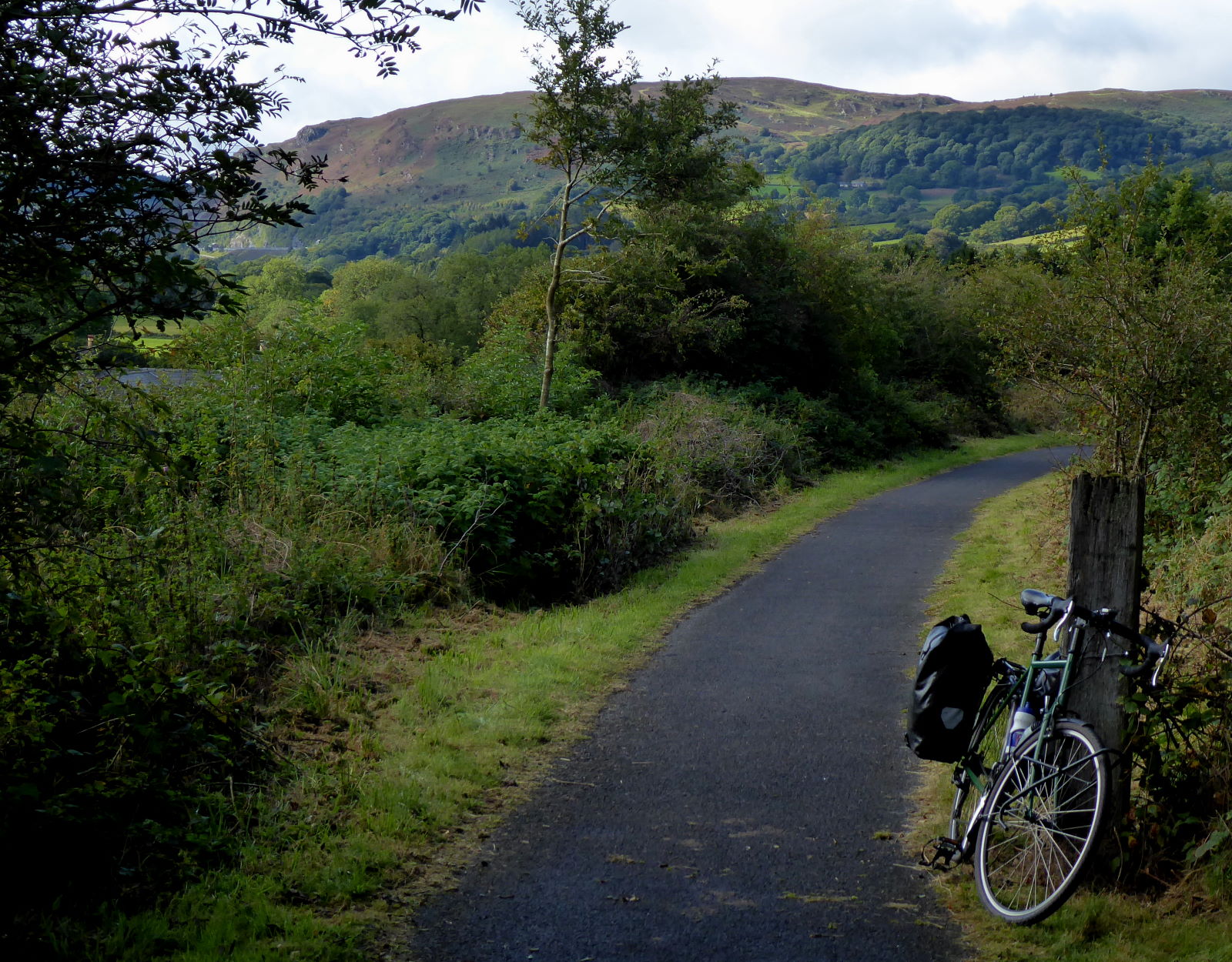 The rest of the day was a long, long succession of glorious views and some of the finest river valley riding in Britain. I approached Rhayader via this railtrail (pic) and bought some snacks for lunch. I couldn’t help singing to myself, to the Blackadder theme tune, ‘Rhayader, Rhayader / My lunch was quite a price / Rhayader, Rhayader / It wasn’t very nice’. 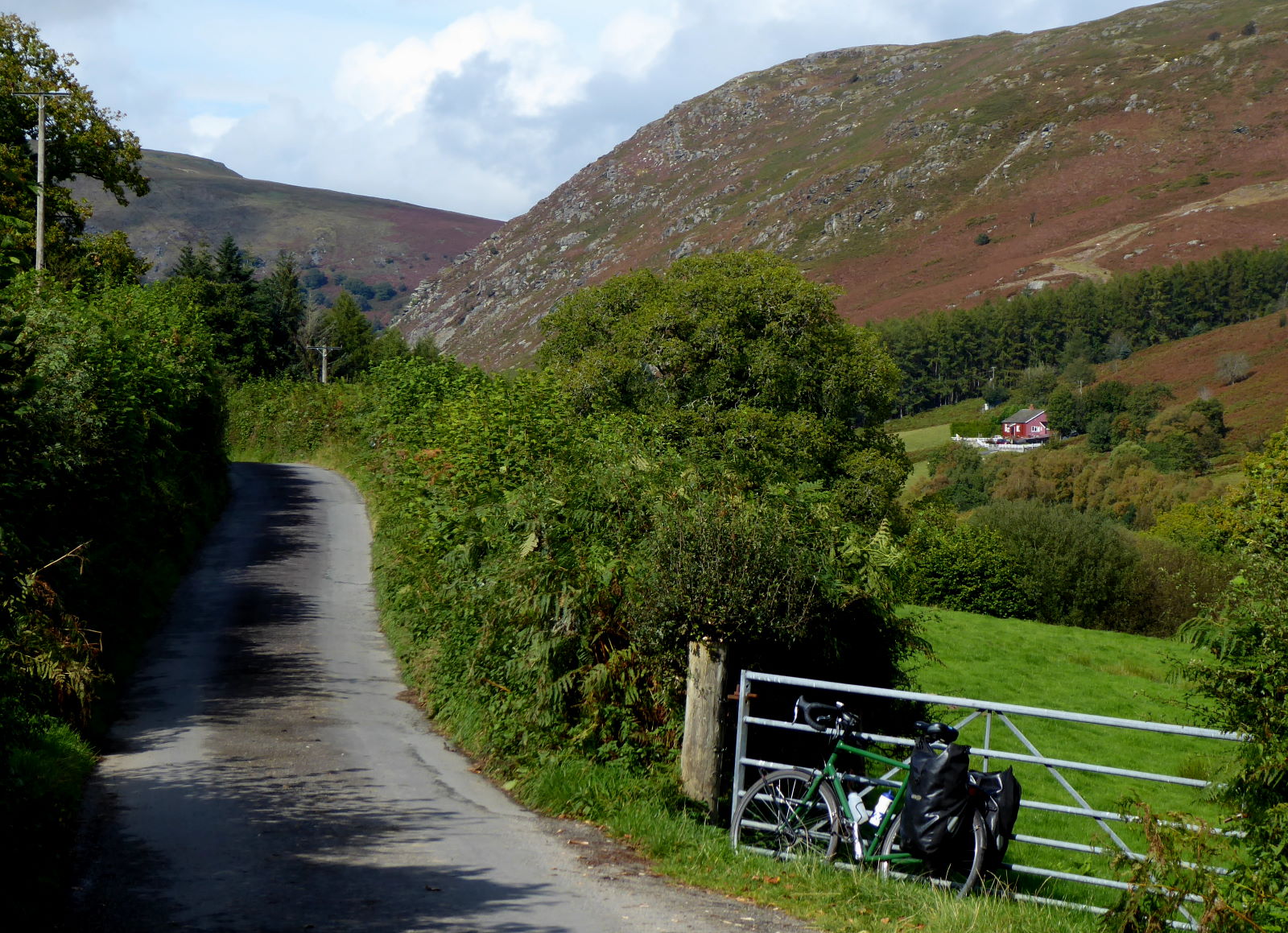 Between there and Llangurig, a tiny lane parallels the main road on the opposite side of the Wye. It’s lovely riding, effectively car-free and with constantly developing views (pic).

Maybe there’s a set of alphabet river rides here, collecting the Dee, Exe and Wye. And maybe Tees? *Mathematical joke warning* And maybe Dee-Exe by Dee-Wye, but that might be too derivative. 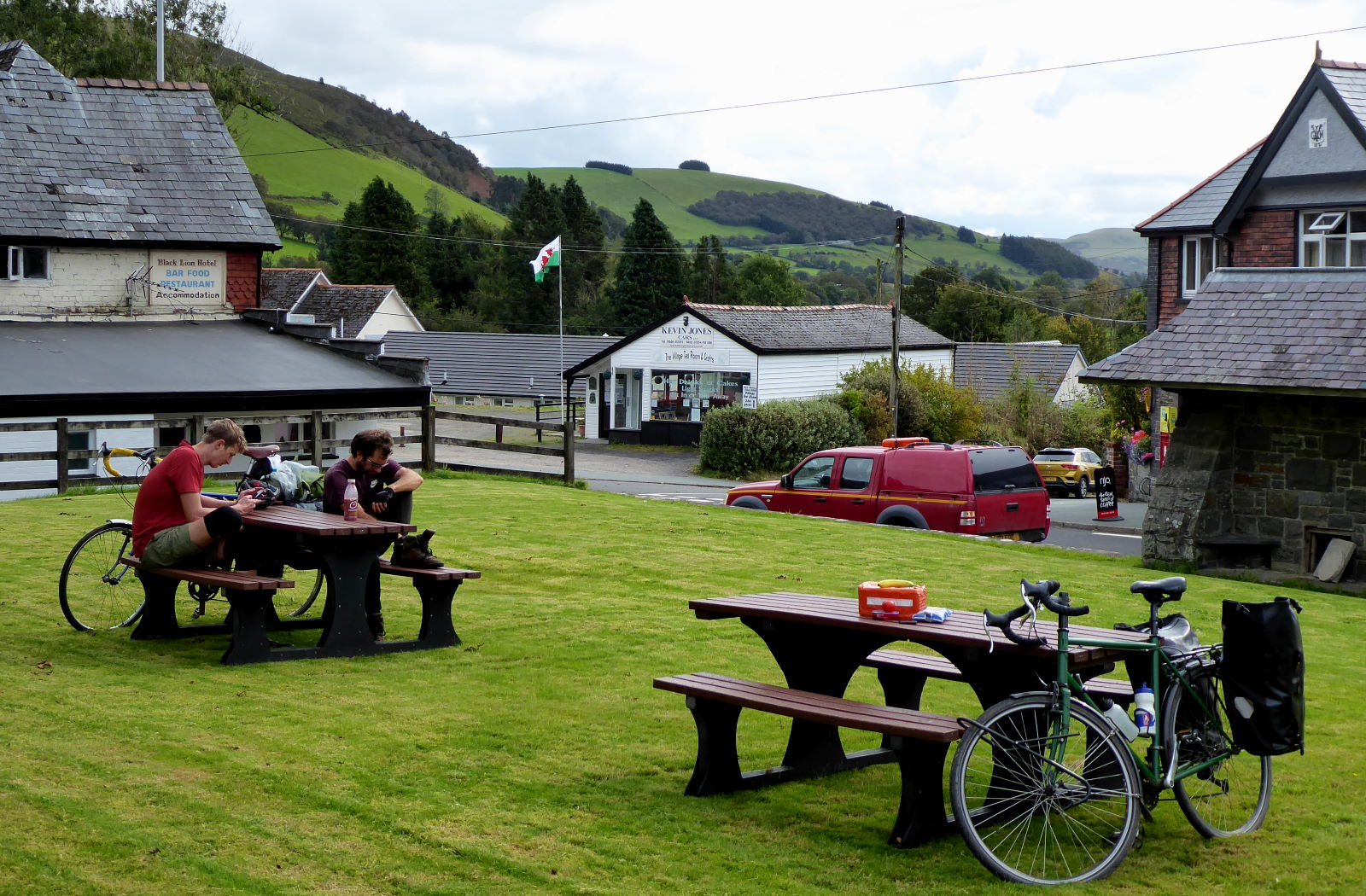 Anyway, more delightful back-lanes riding got me to Llanidloes. Here I had a sunny lunch on the green (pic) alongside some socially-distanced other riders doing the LLC. Despite what I said earlier, my lunch was quite nice. 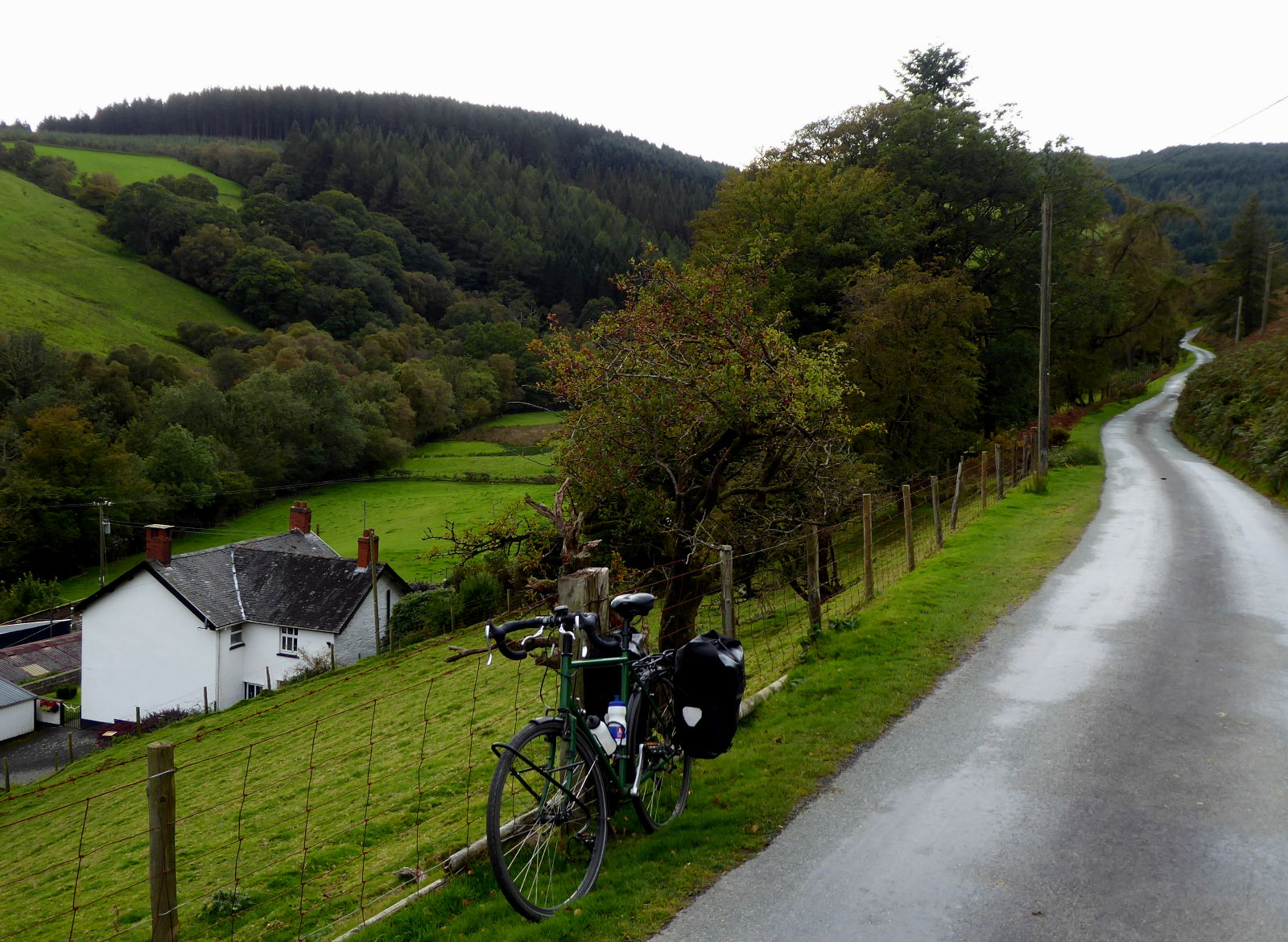 The LLC now took me picturesquely up the upper reaches of the Severn valley (Hafren in Welsh), almost up to the source of the longest river in Britain (pic) – and still hardly any motor traffic. A final thrilling stretch up and over some moorland and into some woods, and I was at Hafren Forest Bunkhouse, a wonderful little hostel that I had all to myself (pic).

Hostels are being hit hard by the current restrictions, with groups severely limited and dorm beds presenting social distancing problems. (Snoring is now one of the least worrying emissions from fellow dorm users.)

I hope super places like this one pull through.