I like Kendal. Every time I pass through I see something interesting I hadn’t seen before.

And I don’t mean on the Wetherspoons menu. I mean things such as this signpost (picture) in the Market Square pointing to both Scafell Pike and Everest, for climbers who have limbered up in the Lakes and fancy something slightly more challenging. 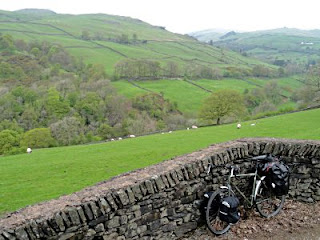 The A6 from Kendal to Shap starts out with nice seductive scenery (picture). The stretch after that, to the bleak top of Shap Fell, is notorious in End to End lore as a long uphill slog. Indeed, arriving in the rather dismal village of Shap comes as a welcome relief. 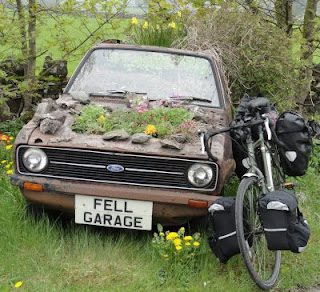 I’ve been through Shap twice recently: in 2010, on my Cape Wrath to Dover ride, and last year while walking the Wainwright Coast to Coast, when I left my towel in a hostel here. I was pleased to see that the planter illustrating ‘100 uses for a dead Ford Escort’ was still here (picture). 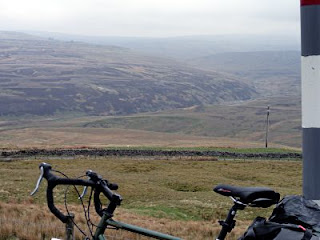 After lunch in Penrith I slogged up the A686 to Hartside, and its 580m summit cafe which gave wonderful panoramic views of the mist. Most of what followed was glorious downhill in moorland (picture) – five miles with hardly a pedal – to Alston.

I came here once with Si and Mark and we were chatted up by local lasses in the pub, proving that Alston is one of Britain’s highest-altitude Cattle Market Towns. 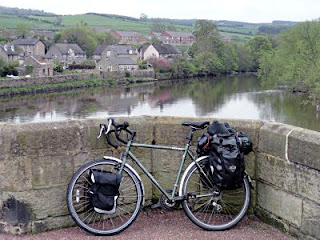 Some more lovely cycling later, I finished in Haydon Bridge, which indeed has a historic bridge now closed to traffic (picture), at a nice riverside campsite with perhaps the best shower I’ve ever seen in a campsite.

Which, given all today’s climbing, was just as well.