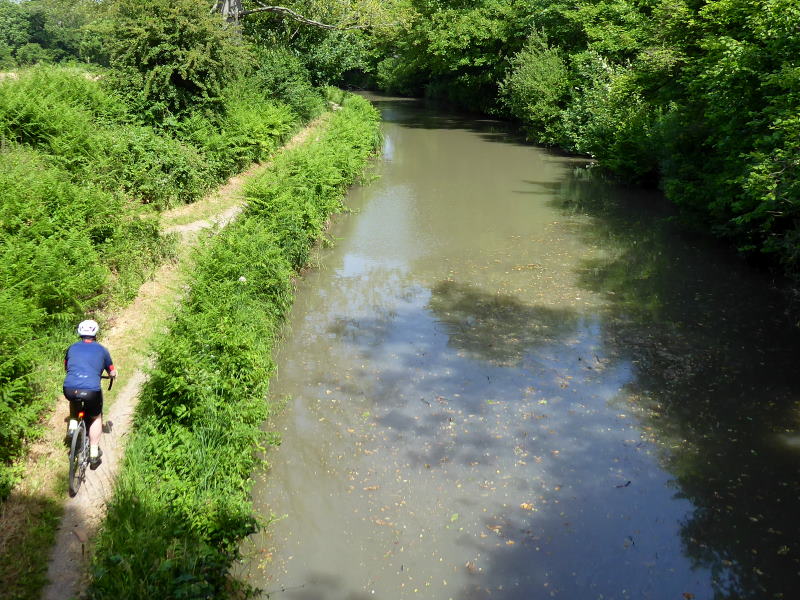 Day 1 of the KAW involved offroad trails through woods and heaths and alongside water, plus unburnt cakes, sauna-like heat, a secret cafe, and (trigger warning) two references to nudity.

The place has some links to Alf, I suppose. The 871 Battle of Reading involved him; and ‘reading’ is something the enlightened, progressive fan of education promoted during his reign as King of the Anglo-Saxons from 876 to 899.

Anyway, we set off from Nigel’s house after coffee and cakes – no, we didn’t incinerate them in tribute to the pensive monarch – and enjoyed sunny riverside cycle paths along the Thames and Kennet, slipping out painlessly from the centre to woodsy trails.

We also tracked the old Roman Road of the Devil’s Highway, which was neither diabolical nor a highway, and not especially straight either.

It was the hottest day of the year, thirty-plus. Or, if you’re Jacob Rees-Mogg, high-eighties.

At lunchtime, just as we were looking glumly at the map and realising there were no cafe-sized villages or towns on the immediate route, we spotted a whiteboard for an informal garden cafe. So, in a salubrious cottage miles from anywhere – well, just north of Hazeley – we enjoyed an al fresco bacon roll and coffee under a shady awning, and a pleasant chat to the maîtresse d’.

The RSPB reserve of Hazeley Heath proved bird-free, and we stopped briefly to eat our chocolate rations before they melted. Lanes and more paths took us to the bridge over the Basingstoke Canal. It’s marked as an alternative route. With its stand-up paddleboarders, bone-dry towpath and shade, looked invitingly cool on such a sweltering day, though not quite cool or hygienic enough for skinny-dip.

At Dogmersfield we got to a pub just before it shut for the afternoon. We thought we’d better hydrate with some long cool non-alcoholic drinks. Two out of three’s not bad.

Our pub room for the evening was in the Plume of Feathers in Crondall, a trim and pretty Hants village with an engagingly Home-Counties atmosphere, with beer-garden banter about the high jinks at the charity cricket match in Odiham that day. (A streaker was involved.)

It was all an affluent, professional, high-status ambience. Well, one of the joys of cycle-touring is to experience being part of an alien culture to mine for a few hours.

The room was good value, but small. I can understand why they don’t let you bring cats. Swinging one of them inside would be very risky.