I just rode the Dunwich Dynamo, the annual 120-mile mass night bike ride from London to the Suffolk coast, which took place on Saturday night and Sunday morning. Here’s how it all unfolded… 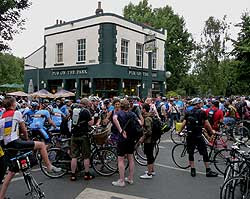 Saturday
7.30pm Arrive at the Pub on the Park, London Fields, Hackney. The building appears to float in sea of cyclists. Perhaps a thousand are here already, waiting for off. I rendezvous with three chums doing it with me.

All London bike life is here, from team whizzkids with kit the colour of rainforest toads, to tribally tattooed and pierced radicals on fixies. Most though look like Sunday leisure riders out for a pub-lunch spin on their everyday bikes.

There is, to me, a pleasing amount of people in normal clothes, barometrically demonstrated by the amount of bare-headed young women in summer frocks and slingbacks on shoppers. There are folders, recumbents, tandems. I’m doing it on my touring bike, whose comfort over distance I can trust. I see lots of people I know.

But no beer for us: too busy chatting and joking, and picking up our routemap and coach tickets back.

8.30pm There’s no ‘start time’; the DD is not organised as such. It’s more of a routeplanned, and very long, Critical Mass, than a race or a tour. But most people set off between 8.15ish and 9ish. We follow the crowds pushing off on the half-hour, an insect colony on wheels creeping through Hackney. Lots of banter with lairy, but jokey, Saturday-night locals. 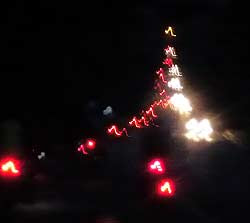 10pm The iconic sight of the DD: the long line of strobing red lights on the long straight main road in front of you, as the bikesnake eats through the Epping Forest blackness.

We stop at a pub for water in and out. This really is a mass event: we’ve been part of a peloton all the way from Hackney, cyclists stretching to the event horizon both ways.

11.30pm Stop for ‘breakfast’ at Great Dunmow, 30-odd miles out. Three hours so far, but still only a quarter of the way: this is a big ride.

It’s chucking-out time in the town centre. Bleary-eyed young men and shouty girls in cheap-chic clubwear chase taxis under the streetlights. All the time, to their bemusement, cyclists are barrelling through the main street.

Some lads on BMXs chat to us amiably. They’re in the relaxed post-cider and mid-cigarette stage. We’re swigging Tesco value fizzy water and gobbling Jaffa cakes and bananas with the opposite effect in mind.

Midnight This ride is the most extraordinary experience. It’s not quite pitch dark: there’s a full moon, organised specially for the ride date every year. The milk-grey clouds smear its light out, hiding the stars, but provide a thermal blanket that makes for a perfect cycling temperature. Everyone’s bare-armed. There’s a tailwind and we’re all flying.

The world is ours. We’re on silent country lanes, devoid of motor traffic but thick with bikes. Navigation is a formality: you simply follow the line of red lights in front you. Behind is a similar line of lights in white, curving like a constellation on the way you’ve come.

Because there’s no start time or official stages, and people stop where and when they want, you’re always overtaking and always being overtaken. Perhaps there are clones and we’re in a bad sci-fi movie, or perhaps we’ve been passed by that same guy five times already. 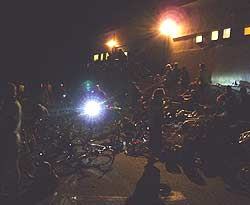 1am The only navigation challenge of the entire night: how to find the ‘lunch stop’. This near-halfway eating opportunity, in a hall in Sible Hedingham, has been specially organised to feed a thousand nocturnal bikers. There are handwritten signs and some people standing on corners pointing, but hundreds of us get lost and have to backtrack.

The hall and its gardens are a shadowy and spotlit chaos of bikes laid flat on the ground and people processing sandwiches. It’s still T-shirt mild. 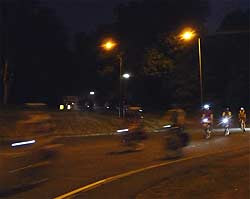 3am This is surprisingly pleasant. We’re rolling along at an easy 12mph, chatting. We overtake steadily and are overtaken steadily. We talk and joke briefly with others as we pass and are passed. The world is dark but it’s all we know and it belongs to us.

Every few miles, chillingly like when you pass a hearse, there is a cluster of two or three people at the roadside, illuminated with ghostly elusiveness by a bike light. They’re mending a puncture. There’s a light-holder and a pump-pumper and sometimes a morale-booster. There but for the grace of the bike gods…

4am I’m still tussling with my cycling chum Dave’s probability poser. Someone tells you he has two children. One is a boy. What’s the chance the other is a boy? Not quite intuitively (depending on the framing of the question) it’s one in three. But the boy was born on a Tuesday – what’s the probability now? Supposedly this changes things and it’s more like one in two. (More)

I don’t get this at all. And I can’t claim mitigating circumstances. We don’t actually feel tired or sleepy. It’s just a lovely steady ride. Dawn breaks gently and we begin to see the cottagey detail of the villages we’re going through. 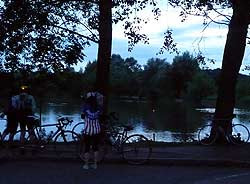 5.30am Another stop – tea? breakfast? – at a picnic site by a cool dawn lake outside Coddenham. We feast on Jaffa cakes and bananas and toast ourselves with carbonated table water. The only litter bin is inside the gents’ toilet. I put the banana skins in the bin. It’s full of them.

When the cleaner arrives later on today, all the cyclists will have passed, and they’ll just find a bin containing seven hundred banana skins. What will they think has been going on? Banana-skin flashmob, perhaps. 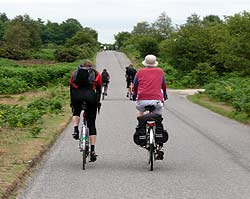 7.30am Eureka. The first signpost to Dunwich. Seven miles seems nothing now. The last few miles are across Dunwich Heath, a change of landscape so abrupt from the rolling Suffolk countryside that it feels almost tropical.

We can see cyclists coming back the other way. Most have done their beach stuff and are cycling a few miles to Ipswich to get the train back. Some are actually cycling back to London. 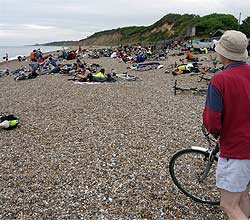 The place is overrun with cyclists. The cafe is stockaded by queues. I’ve still got plenty of food in my panniers though. We find a spot on the shingle beach, lay our bikes flat, and strip off for a swim in the uncold, pleasant sea. The grey waves are exhilarating in their cool liquidity. 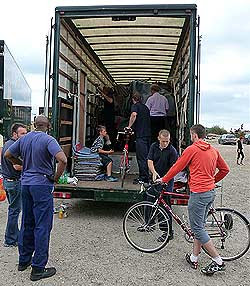 9am-1pm Getting home is the only big problem of the DD. Train spaces are obviously limited. Some have lifts from loved ones to whisk them and bike back home in a big hatchback. For the remainder – 730, we are later told – there is a coach service back, which transports your bike in a series of furniture vans, wadded tightly in between blankets. 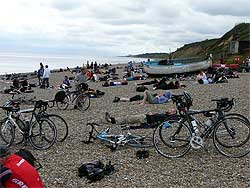 Having breakfast, swimming, snoozing on the beach, getting the bike organised into the van and finding our coach seat takes all morning. Finally, approaching 1pm, we pull out of the car park to start the journey home. 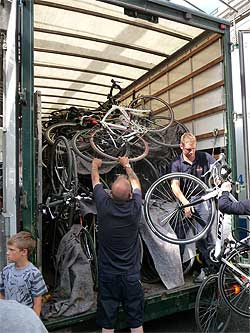 3.30pm Arrive back in London, at Smithfield’s. The intricate unloading of the bikes takes place in the meat market. We reclaim our machines and cycle home via meals and goodbyes and bumpings-into of more people we know. Time, I rather think, for a bath and an early night.

Final words
This was the first DD I’ve done; it was a fantastic and unique experience, for me the most enjoyable non-racing mass-ride there is. Better than London Skyride, with its corporate oppression; better than Critical Mass, with its confrontation and tribalism. Even with 1,400 people this year, the biggest ever, it still feels a cult, something special.

The business of cycling from dusk to dawn through dark country lanes, for 120 miles, in a cascade of over a thousand other people on bikes, is slightly weird, but it’s a great and utterly memorable thing to do.

To reiterate: it’s not a race, it’s not for charity, it’s not sponsored and it’s minimally organised. You don’t have to register for anything and it’s free. It’s just hundreds of people going for a bike ride. One of the greatest rides of your life.

e2e.bike > Other > Dunwich Dynamo: Long ride to the dawn