This post summarises the three weeks before starting the Polish End to End, making my way up from Albania by train and bike.

I’d been planning the Polish E2E schedule when my friend Tim (who I cycled Taiwan with in 2017) proposed a get-together of friends in a villa in Montenegro to celebrate a special birthday, the sort where you need a safety briefing for fire because there are so many candles.

Rather than fly back to England and fly back out again, I decided to start in Albania, go from there to the Montenegro thing, then make my way overland to southern Poland by a combination of train and cycling. What could be simpler?

Well, quite a lot actually, like the Riemann Hypothesis or Polish grammar or Brexit. In general, international trains don’t take bikes, which means taking some slow local trains and cycling over borders (always fun because you queue-jump past the cars).

Add in the closure of some lines for works (north out of Belgrade) and it all got rather tricky. But in the end it was a pleasant and quirky, if leisurely, way to get from Tirana, in Albania, via Montenegro, Serbia and Hungary, to Poprad, in Slovakia and near the Polish border.

And much more fun than flying, and cheaper, even with the accomm. 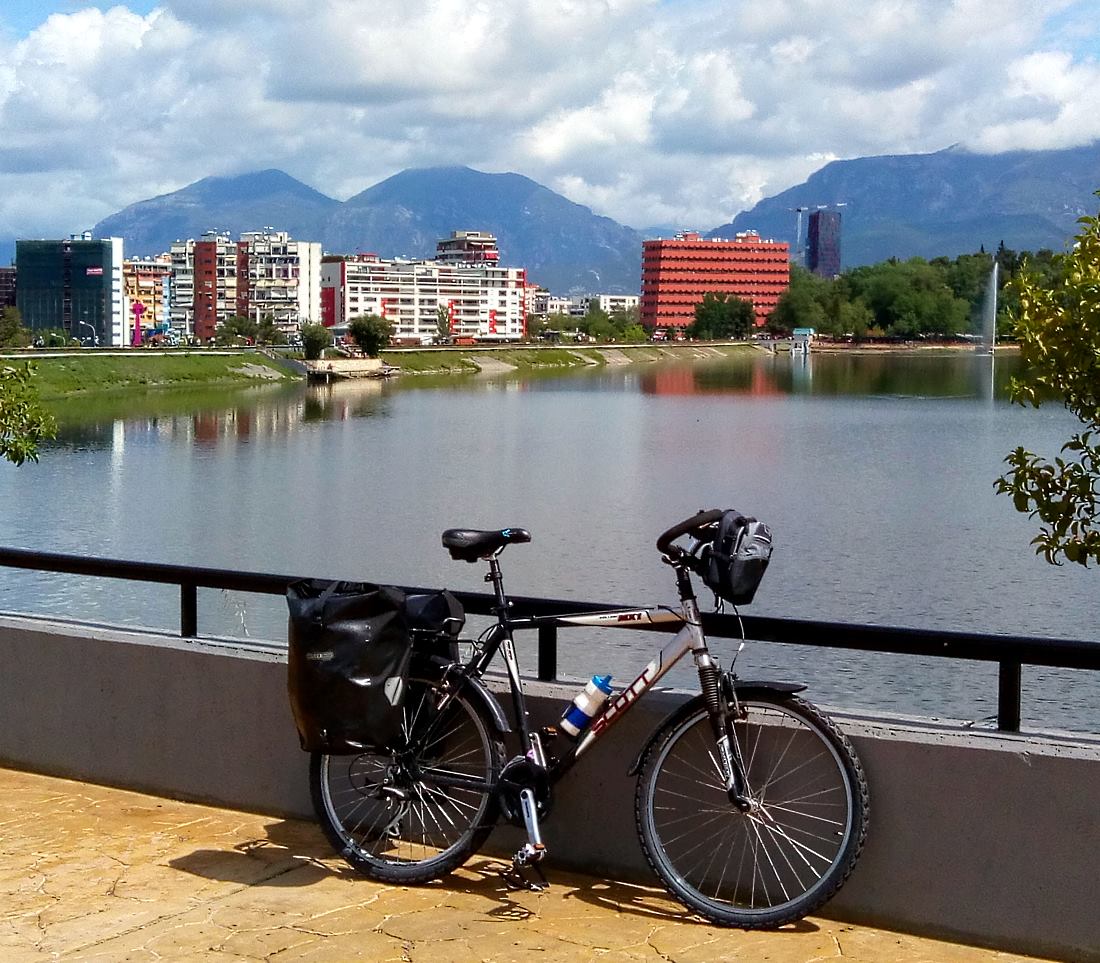 It was my first time in Albania. I spent a very enjoyable couple of days there riding round the centre, which has a few decent cycleways, such as this one to a local reservoir (pic). The other side is lined with bars and locals buying 35p ice creams and beers. As I soon found to my delight.

Tirana is now unrecognisable from the grey, electricity-starved capital of misery under hard man of Communism Enver Hoxha. (Curious how men of power often can’t keep the lights on.) It’s bright, dynamic, and packed with lively and friendly bars, cafes, restaurants and bakeries. Colourful too, though that’s partly the lavish graffiti everywhere. 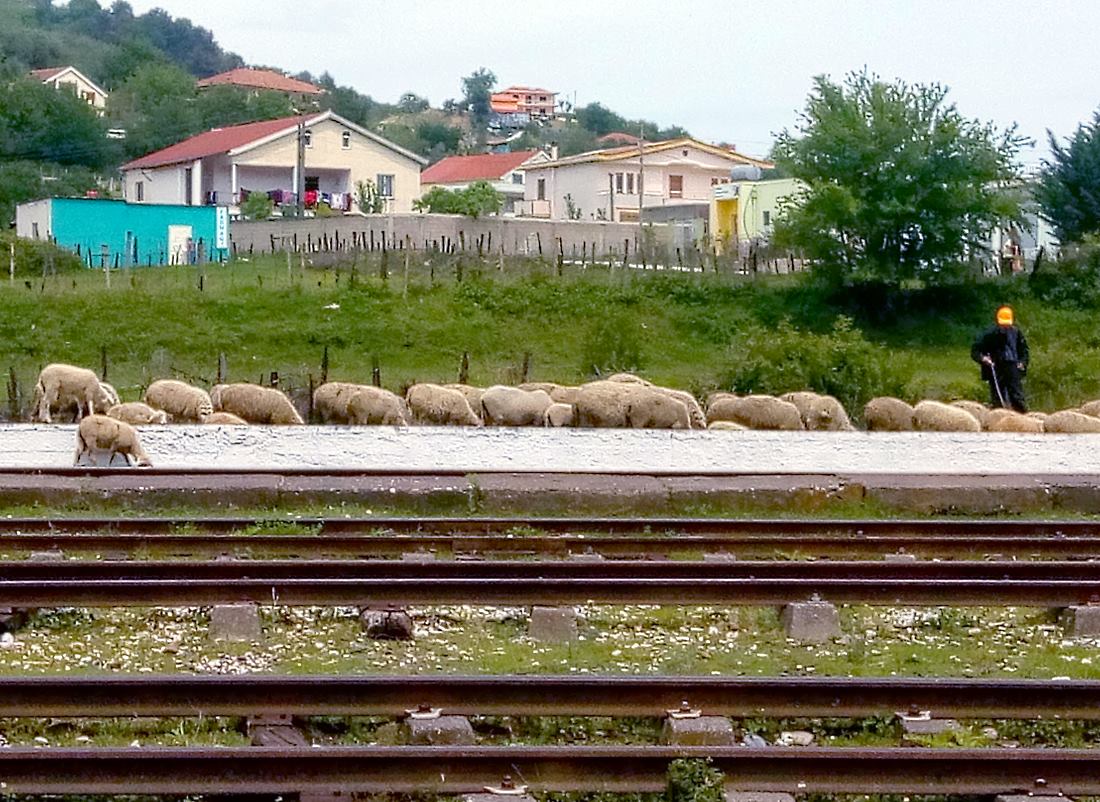 To get to Montenegro I pedalled out to ‘Tirana rail station’, which has been moved out Ryanair-style to Vorë, 16km and a century away. We had to clear the sheep off the line first (pic) before the world’s slowest train lumbered up to the lakeside town of Shkodër about 50km away. It took four hours. I could have cycled it quicker with a tailwind. There wasn’t.

After a restorative evening of 35ps well spent in Shkodër, I cycled the next day across the border into Montenegro. This was for the week of festivities with Tim et al in Virpazar, and I’ll remember it for a long time, particularly when I get my credit card statements. 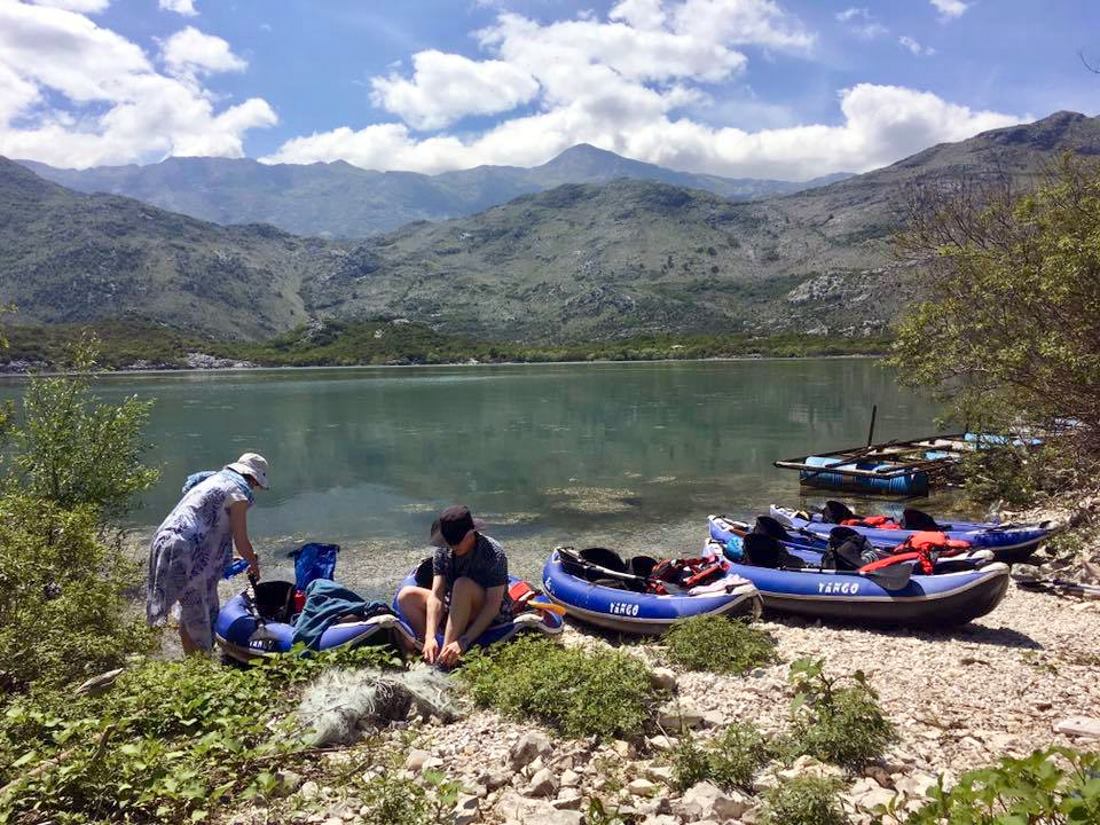 We hiked up 1200m peaks, canoed on stunning Lake Skadar (pic), ate lots of local food, partied a lot, and went on a barely advisable tour of local wineries by bike. 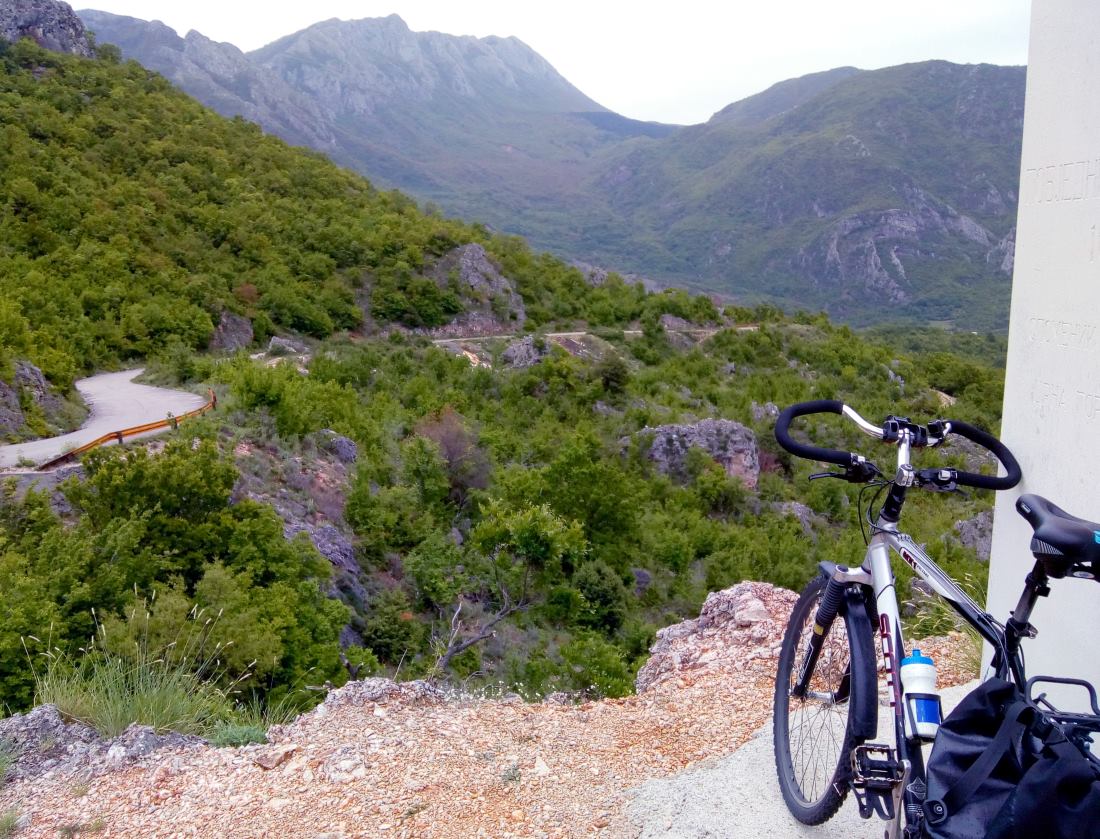 Magnificent views, and of course I didn’t hesitate for a moment debating whether to ride all the way up and over back to Virpazar. I instantly decided to get the train.

After the Montenegro week I biked to Podgorica, and explored everything worth seeing, which took about twenty minutes. I then took the train to Belgrade, one of the world’s most stunning rail journeys.

It’s quite amazing how they engineered the line in such mountainous terrain, but were defeated by the problem of providing onboard bike spaces. They’re certainly allowed, in fact there’s a special cycle ticket, but with nowhere to put them, they go in the vestibule. My bike spent the ten-hour journey blocking the doors on one side or the other.

With the Belgrade–Budapest train out of action for line works, I took a bus to Novi Sad. Belgrade is rather hard and gritty, as was my bed in the cheap hotel there, but Novi Sad is a more cultured, laid-back, bikey sort of university town, with a fine Old Town buzzing with bars and restaurants. 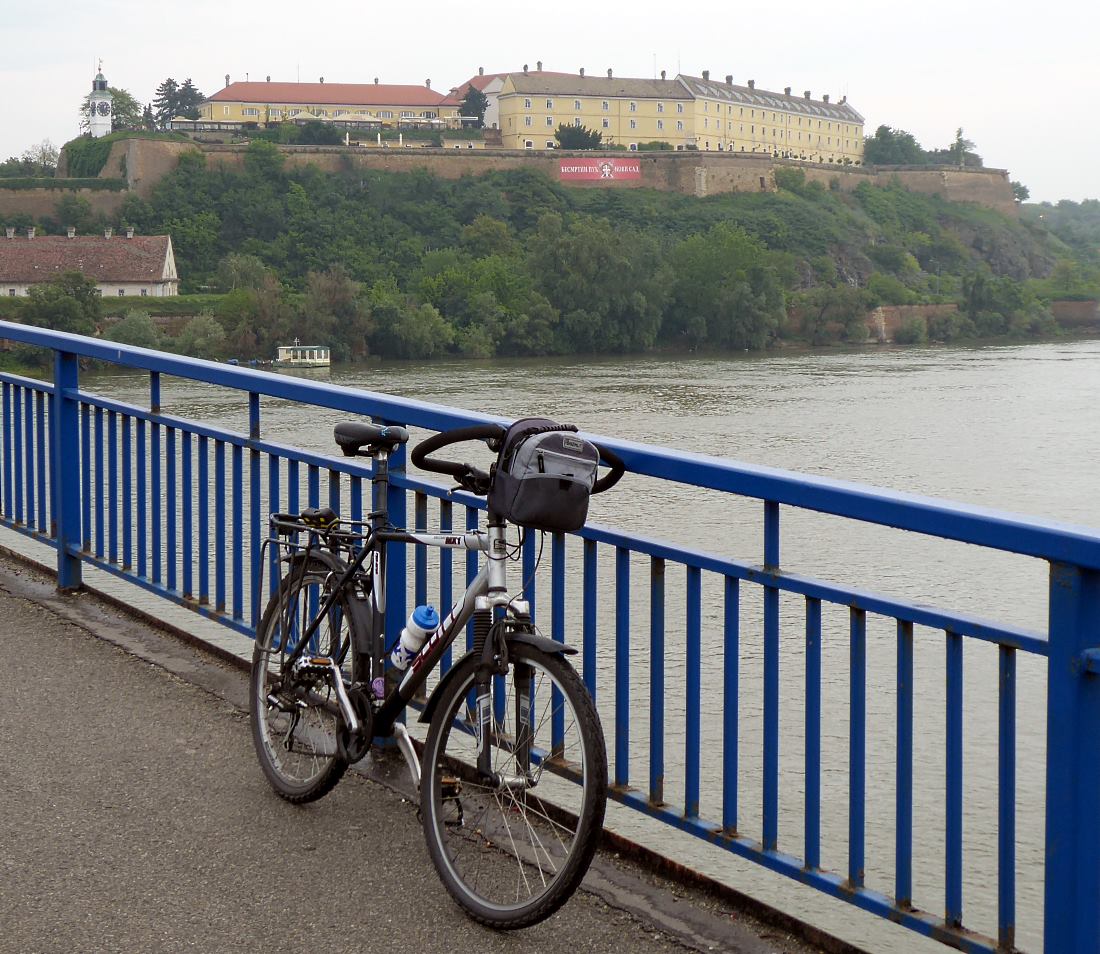 A decent system of cycleways round the town too, one of which took me over the Danube to Petrovaradin Fortress (pic). It’s dubbed the ‘Gibraltar of the Danube’, but I don’t think it’s that bad. 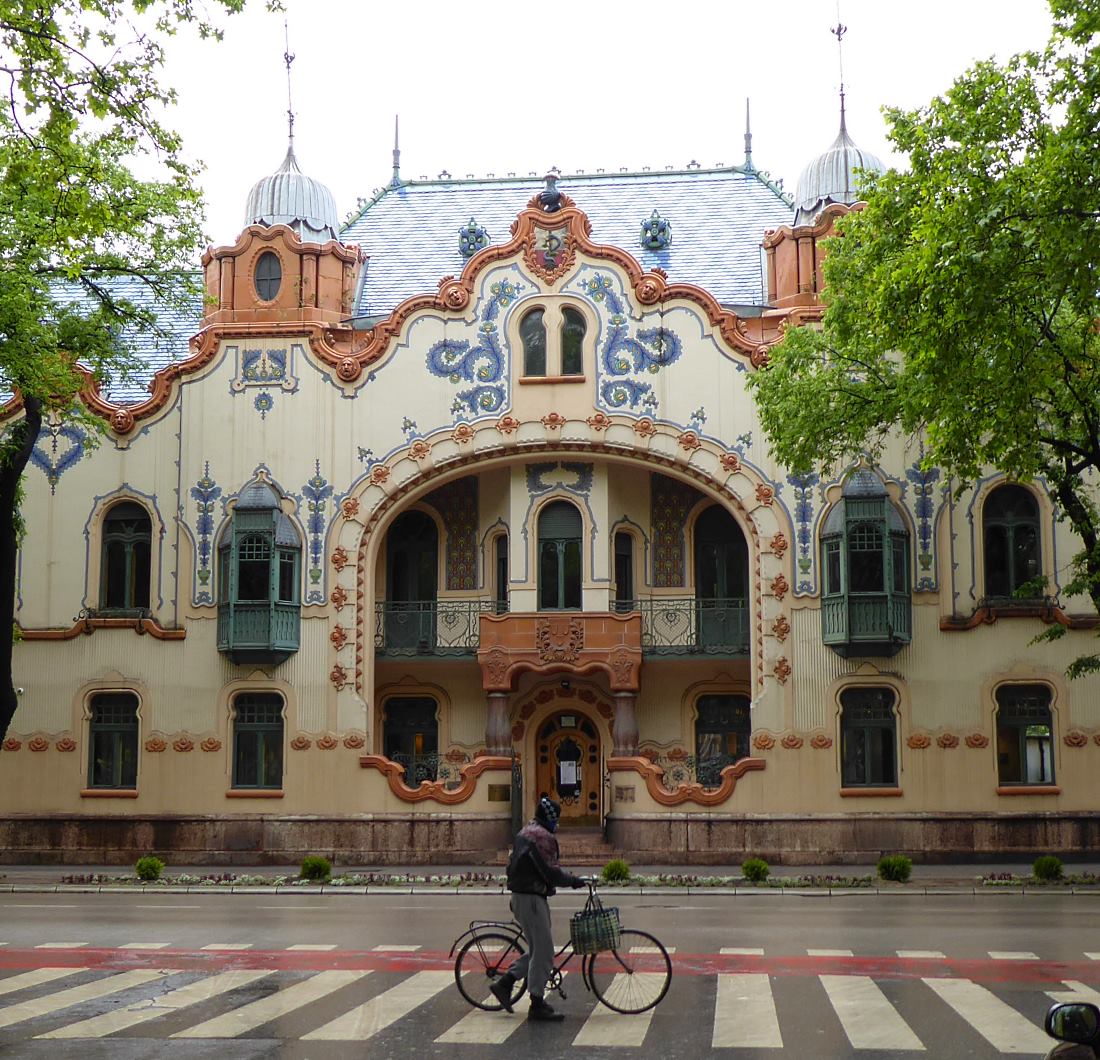 Anyway, a clanky local train got me up towards Hungary to the North Serbian town of Subotica (pic). I had been expecting a border-town dump with a few forlorn chemical factories, but it’s actually an Art Nouveau gem (pic).

After exploring the centre’s fine streets and feeling rather secessionist, I pedalled 30 miles or so to Szeged, back in the EU, from where I knew I could get trains fast enough that I might actually outlive the journey.

Szeged has some handsome architecture too, notably the twin-towered cathedral.

For the benefit of students think they are seeing double after a session in the many stylish pubs and bars, they’ve put up the word SZEGED to remind them where they are (pic).

Two fast trains got me to Bratislava, capital of Slovakia.

The Ice Hockey World Cup was on (spoiler: GB got relegated), and lots of people were carousing in the bars of the lovely Old Town wielding hockey sticks and wearing team shirts.

They weren’t aggressive or fighting or anything, so they must have been fans not players. 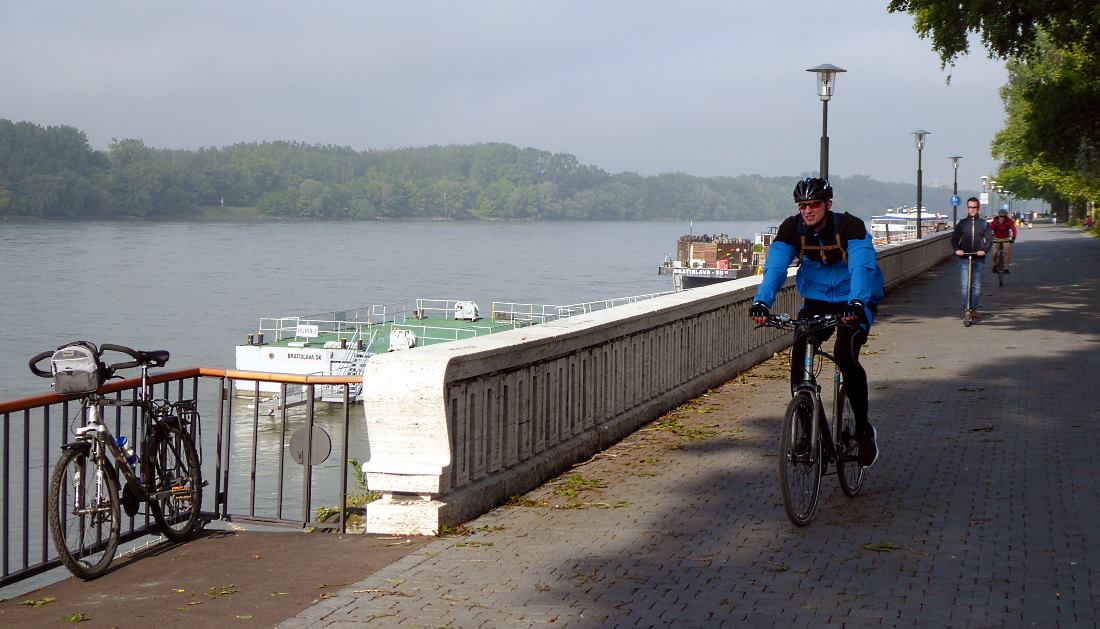 After a morning spin alongside the Danube (pic) I took my final train, to Poprad four hours away. So here I am in Slovakia’s lively third city. I’m staying in a lovely little hostel-apartment – that building lower left (pic).

On Sunday I’ll be cycling to Zakopane, which is not far at all.

In fact it’s just the other side of those mountains.