A wonderful day of cycling experiences, stories, and pleasant encounters – plus a panic with a happy ending. 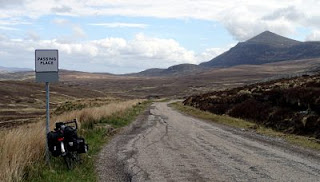 The A836 north from Lairg (picture) is a great cycling experience: narrow tarmac, gentle gradients if any, little traffic, and going 20 miles across scenic uninhabited landscape. It’s more like a Sustrans railtrail than an A road. Except for the bit about scenery.

I spent the first ten miles chatting to a friendly local cyclist out for a spin. I understood quite a lot of what he said. I think he talked about cycling. 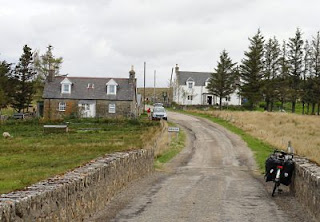 Well, I say the landscape is ‘uninhabited’: there’s the ‘village’ of Crask halfway. Which consists, precisely, of a bothy and a pub (picture: bothy left, pub right). The pub, the Crask Inn, is a must-visit gem, a glimpse into the 1930s – in the nicest way. I must cycle back here soon, I thought. Little did I know how true that was going to turn out… 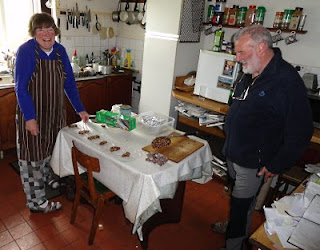 While at the Crask I talked to a chap (picture, right) who was about to bag his 282nd and final Munro with his pals. To celebrate, he had made some clootie dumpling. I had assumed this was another nonsense invention of Burns, but in fact it is a fruitcake. He gave me some to have with my coffee. Mind you, when he smiled at me and said, ‘fruitcake?’, perhaps he was implying something else… 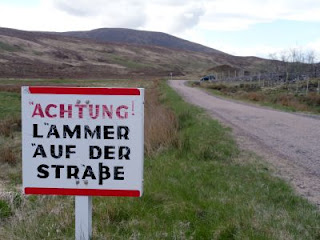 Anyway: the panic story. Five miles further up the A836, just after seeing this sign – evidently the sheep are flummoxed by the Germans driving on the wrong side of the single-lane road – I suddenly realised, in a cold sweat, that I had lost my wallet. Had I left it in the pub? Had I put it on top of my panniers and rode off, in which case it could have fallen off anywhere…?

Panting, I hurtled back towards the Crask Inn. It’s the fastest I’ve ever cycled with a fully-laden touring bike. After three miles I saw a Land Rover coming towards me, driven by the landlord, smiling and waving my wallet. The man is a saint. The Crask Inn was already in my top three of Favourite Remote Pubs for Cycling To, along with Yorkshire’s Tan Hill Inn and Dartmoor’s Warren House Inn; now the Crask is definitely No. 1. 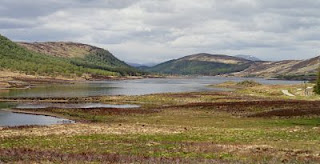 With a lunatic grin and occasional steam-train-like exhalations of relief, I went along the awesomely beautiful, and virtually untrafficked, B873 alongside Loch Naver and alongside the River Naver (picture) – another special cycling experience. 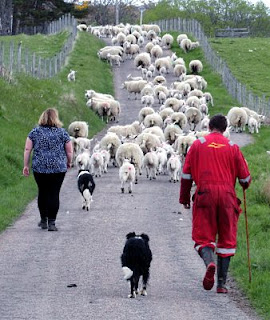 Untrafficked, but that doesn’t mean jam-free… in Rosal I was entertainingly held up by these local farmers manoeuvring some sheep (picture). Rosal was one of the most notorious locations of the Clearances, when locals were evicted in favour of sheep. Don’t these sheep have any remorse? Don’t they know they have blood on their hands? (Feet? Hooves? Sub please check) 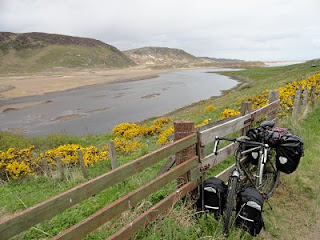 Arriving at Bettyhill (picture) meant I’d reached the northern coast, and the scenery took a different turn – as did the wind, annoyingly, which had been a tailbreeze hitherto. It drizzled all the way on up-and-down terrain to Melvich, where there was a campsite in a scenic bay in the garden of a pub with wifi. It wasn’t a difficult decision as to where to spend the night.

Sadly, I couldn’t find a sign that said ‘To Bettyhill and John o’Groats’. If so, I would have added, ‘…the gift of a son’.