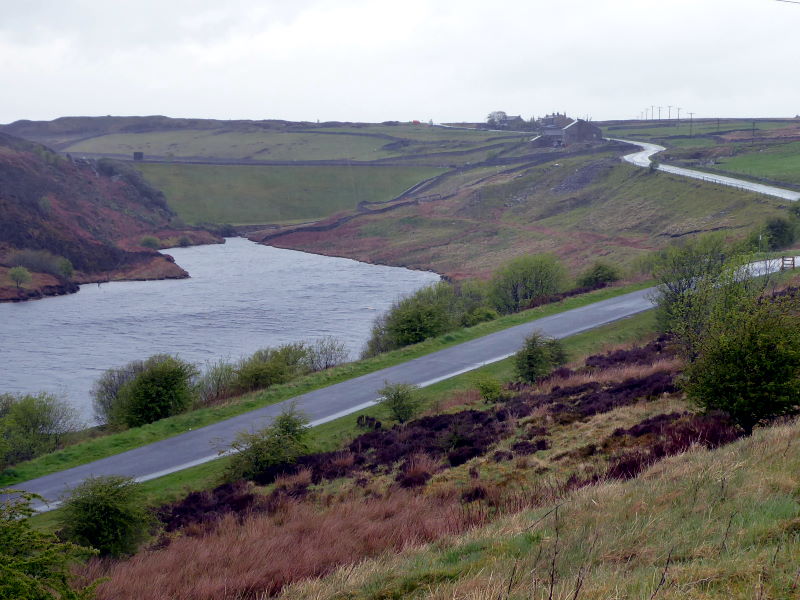 With Abbeydale investigated yesterday, I could ride on through Sheffield centre and out past Hillsborough. The stadium there is a reminder that the city boasts the oldest football team in the world still playing: Sheffield FC, formed in 1857. Their last trophy was in 1904, so some fans are getting impatient. Of course they’re not to be confused with Sheffield United or Sheffield Wednesday, and they’re definitely not to be confused with each other, especially in a partisan Sheffield pub.

In medicine, a ‘zebra’ is a diagnosis of a rare disease from common symptoms. It comes from the 20th-century maxim that ‘if you hear hoofbeats, think horses not zebras’ – a warning against over-thinking, and for simple explanations. Reacting to this, the Ehlers-Danlos Society has the zebra as its symbol, because those with the condition often go undiagnosed for a long time.

I took the long, steady climb through Loxley. The place is a candidate for the birthplace of Robin Hood, the legendary proponent of wealth redistribution away from the rich and towards the poor, so he wouldn’t fit in well with today’s Tory cabinet. I didn’t see any references to him in the village through the drizzle, though.

West beyond Sheffield is a vast area of reservoirs squeezed in between bare green Pennine hills. It was scenic riding, but slow going and strenuous, with steep climbs and descents vaulting between the flat lanes running along the watersides. I picnicked at the delightful streamside in Lower Bradfield – a place hitherto familiar to me from beer pumps – but desisted from visiting Upper Bradfield for reasons guessable from the name.

It was raining now, and I sat out one of the heavier showers with a coffee in Langsett. I had a choice. The cafe sported bike-friendly red polka dots, but had only outside tables; the pub had an indoor fireside. The pub won.

More big, gritty, grey-green views and drizzly roads brought me to the relief of the Trans Pennine Trail outside Penistone. The TPT can be an irritating patchwork, but this stretch west of Penistone is a good, sealed railtrail, and provided some welcome flat miles.

I was pleased to see that the mystery sculpture (guerilla artwork? comedy commission?) of a half-buried cyclist come a cropper that I remembered from my visit in 2018 was still here.

Leaving the railtrail, I climbed up past Winscar Reservoir, source of the River Don, and enjoyed a long, long, fast, gleeful downhill all the way to Holmfirth. The rugged, robust town is famous as the setting for the geriatric BBC comedy series Last of the Summer Wine, which to be honest I never really got. Maybe too subtle for me.

Anyway, I sat out more heavy showers in a pub with a beer and burger, surrounded by chirpy, double-jabbed West Yorkshire OAPs who all sounded jollier company than the clumsy caricatures of the telly programme.

It was still drizzly but, pleasingly, still almost all downhill. Though I was following main roads, it wasn’t too busy or hectic, and I made good progress.

I got deliberately lost in Huddersfield, with its handsome Victorian centre that told of a prosperous past, but recalibrated by finding the train station and the statue of the town’s most famous son, Harold Wilson.

He was the first prime minster I remember, and there he was, striding purposefully off to make a stirring speech about the white hot heat of technology, broker some shadowy deal, and think of ways to bait Ted Heath.

At Elland I joined the canal towpath for my final pleasant, flat, tarmac-smooth roll into Halifax. The Piece Hall is the town’s literal centrepiece, and however many times I come here, I’m always amazed by how big the square is, a grand mashup of Regency splendour and Salamanca’s plaza mayor. I’m also always amazed by how big the price of a drink is, so it would be the Wetherspoon for that tonight instead.