How many Cuban bureaucrats does it take to change a light bulb? Makes no difference, we don’t have a light bulb…

Anyway, I spent the morning at the visa office, extending my stay, and the officials were all helpful enough.

First, I had to get special stamps to pay with, involving a trip to Bandec bank.

Second, though it appeared I needed a paper copy of my medical insurance, the officials were happy enough with the PDF version displayed onscreen on my laptop. (This despite the newly cracked screen, which made everything appear as if viewed through a cobweb.) Just as well, as I hadn’t been able to organise a printout anywhere in town.

Relieved, I could at last get back on the bike, setting off two hours later than usual, and two hours hotter. 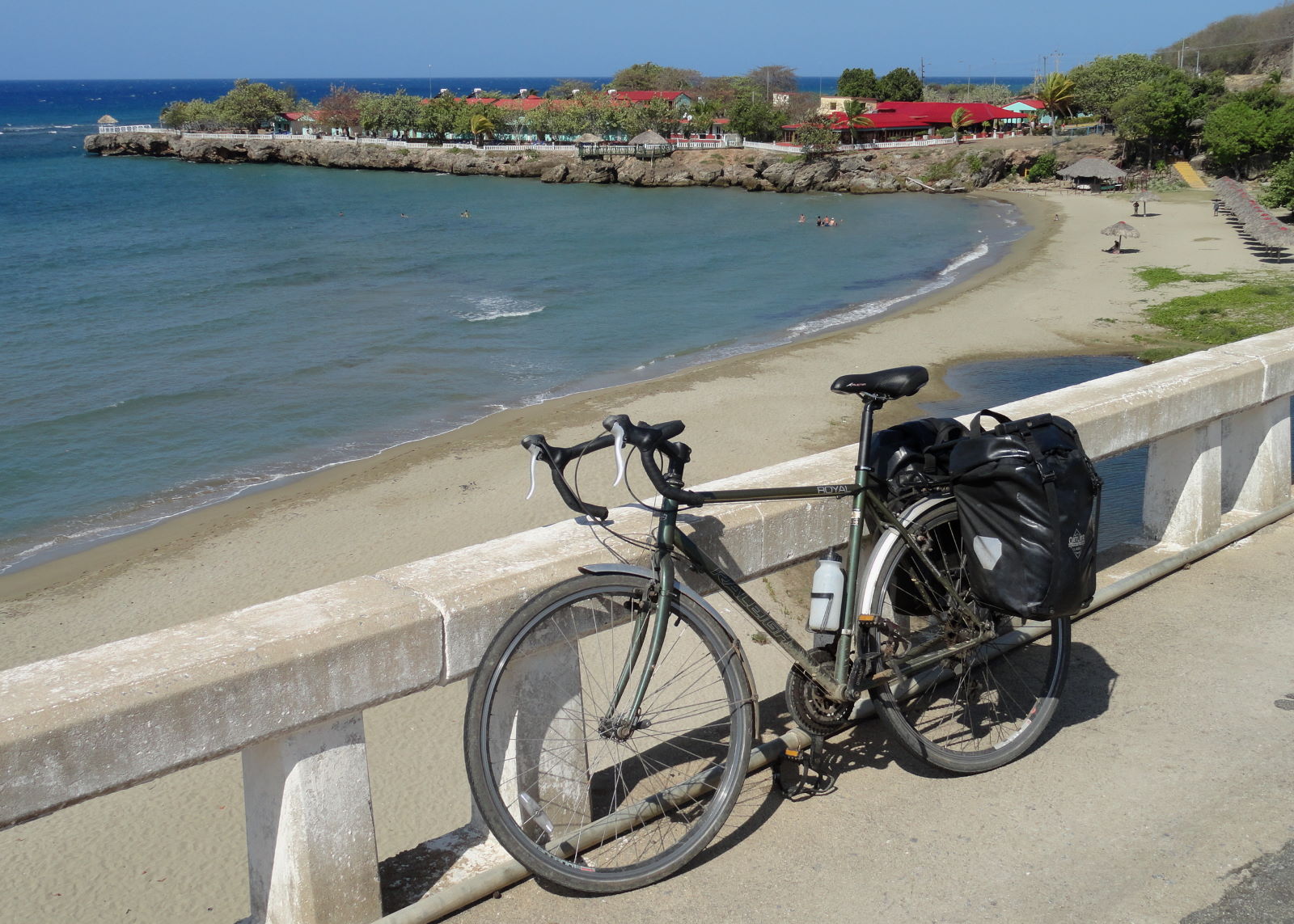 Still, it was mostly tailwind for my scenic ride with the water’s edge to my left (pic), mountains to my right, cloudless sky above, and somewhere ahead, a can of Bucanero with my name on it. There was little traffic and few settlements, though enough for me to get a couple of refrescos and buy a bottle of water. 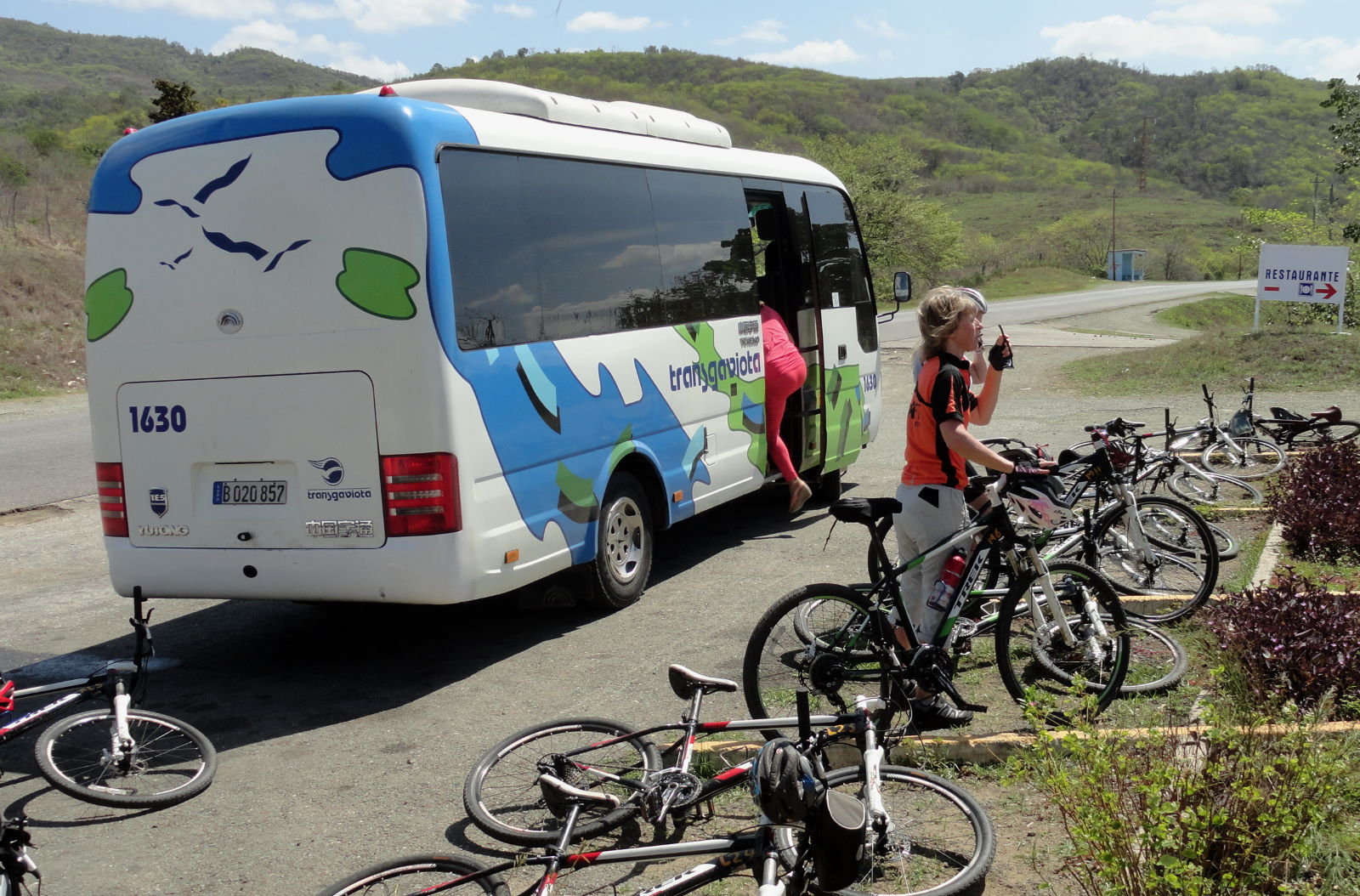 I stopped at a ‘motorway services’ to say hello to various tour parties being dispensed from coaches, setting up for a day’s bike ride on chunky MTBs (pic). (Hmm; Cuban roads aren’t that bad.)

I was pleased to be going the opposite way to them, partly because I don’t enjoy groups, but mainly because they were heading east, into the prevailing wind. 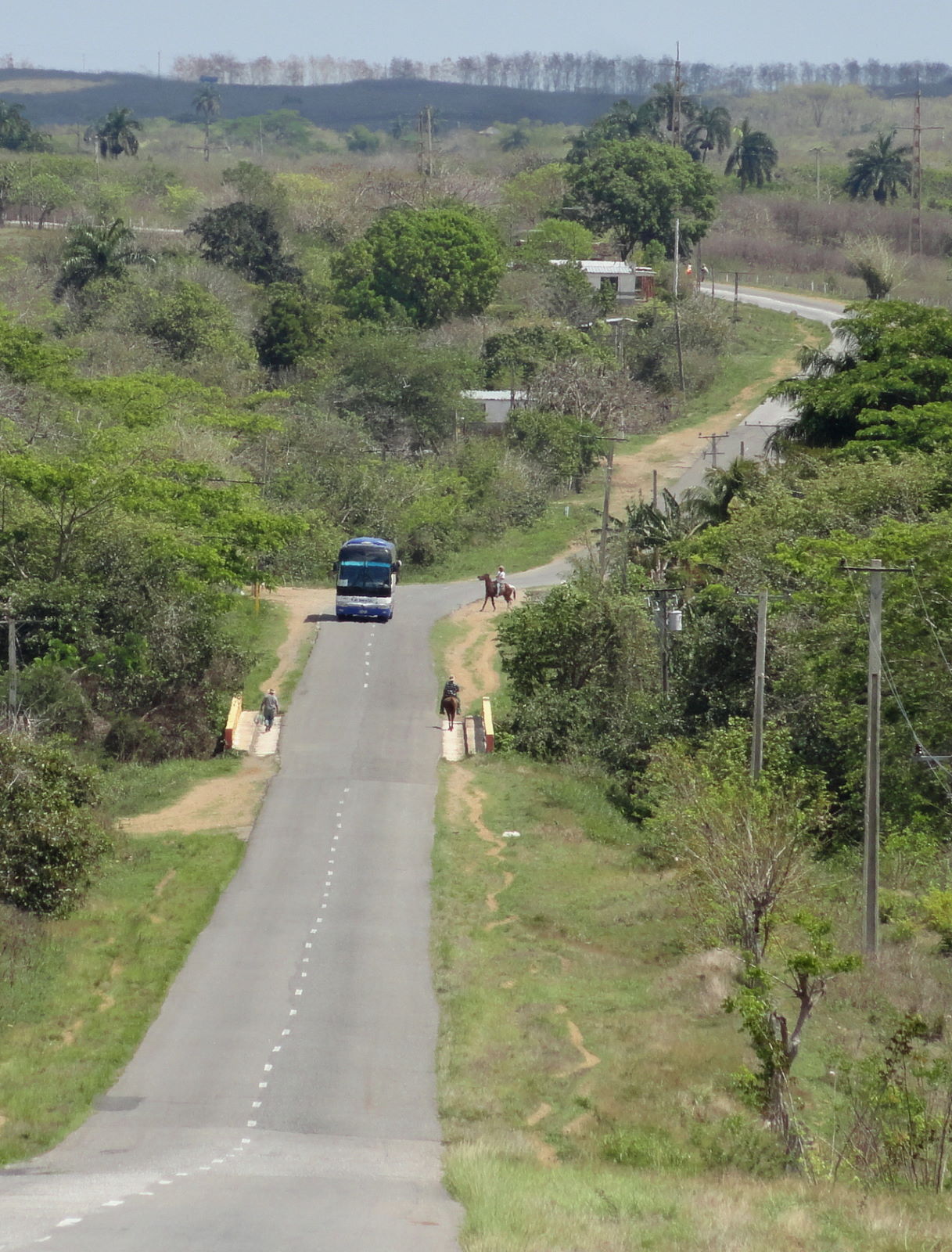 I got my own chance to experience headwind soon though, as the road wound inland and ultimately headed into sparse scrub south of Cienfuegos (pic). It felt a bit of a slog but I got to the city about twoish.

I enjoyed a cold drink for a couple of pesos from a stall run by a rep for the CDR (Committee for the Defence of the Revolution). They monitor anti-government activity, such as tourists paying for drinks at stalls in pesos, instead of tourist dollars for twenty times as much.

I promised to keep an eye out for any such behaviour and we toasted the Cuban people with fresh pineapple juice. Then I ordered another for two pesos.

As usual, my chosen casa was full but the host found me a room, actually right opposite, a short walk from the central square (pic). I had a shower and strolled to the square’s only bar, swigging a two-peso guarapo en route. 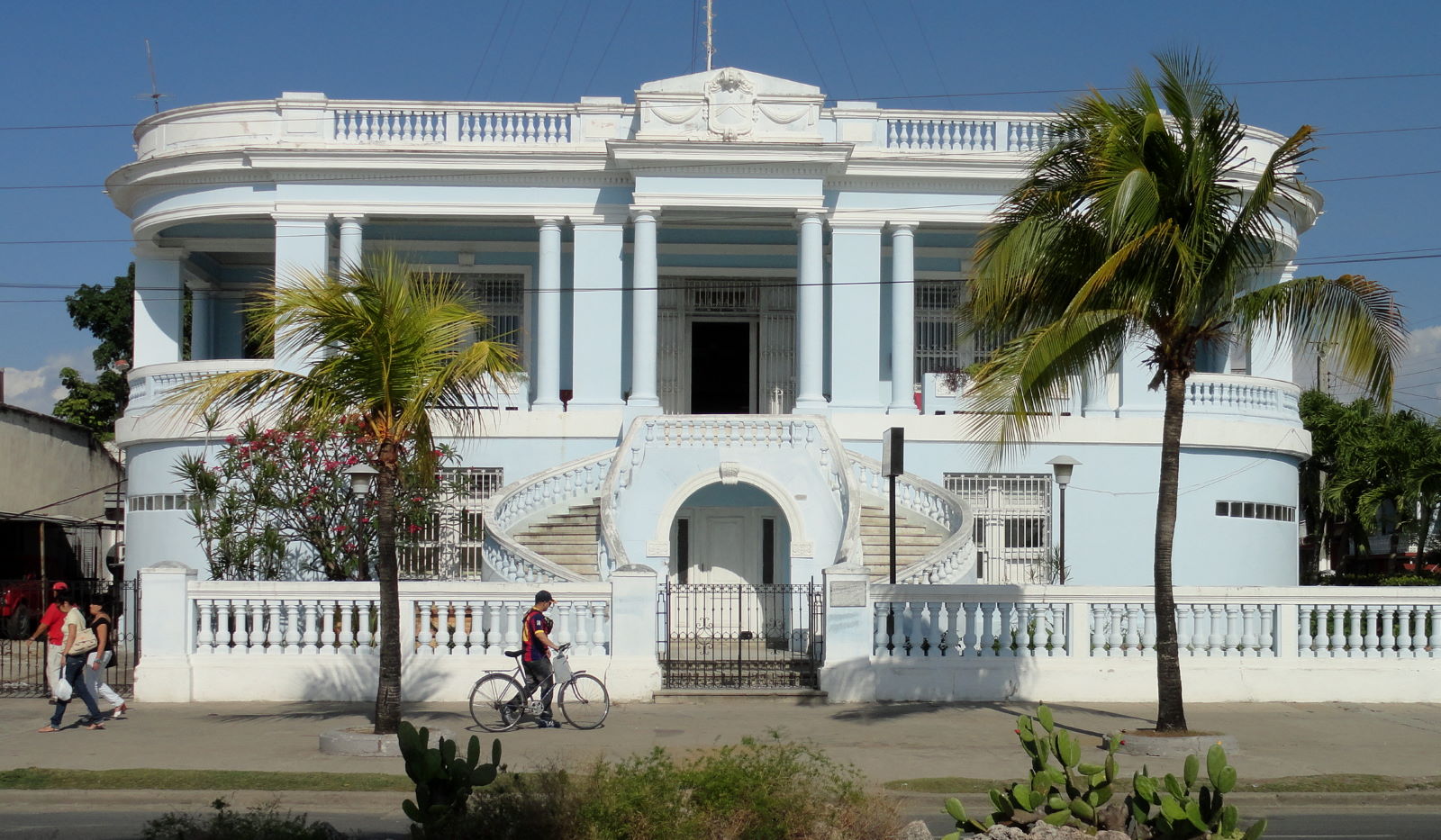 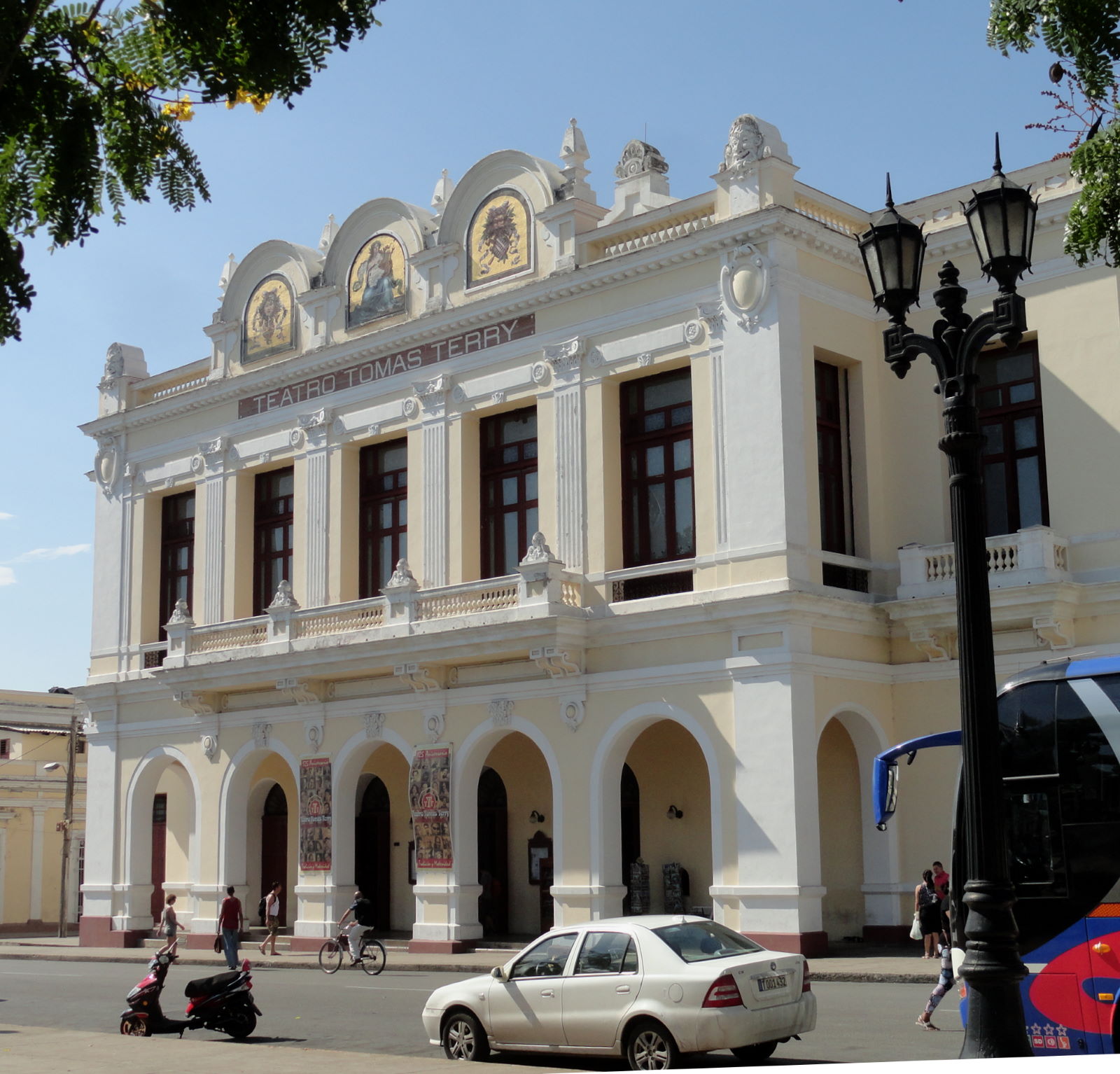 …And a theatre named after the Venezuelan industrialist Tomás Terry (pic), though of course I couldn’t help thinking of Terry-Thomas, in full Carry On cad/ bounder mode.

I walked down pedestrian streets, grabbing a peso burger and beer en route, heading for the social hub of the waterside: down the Paseo and its fine colonnades, along the sunny Malecón, and down to Punta Gorda and its leisure park. Busy, social, lively, fun. 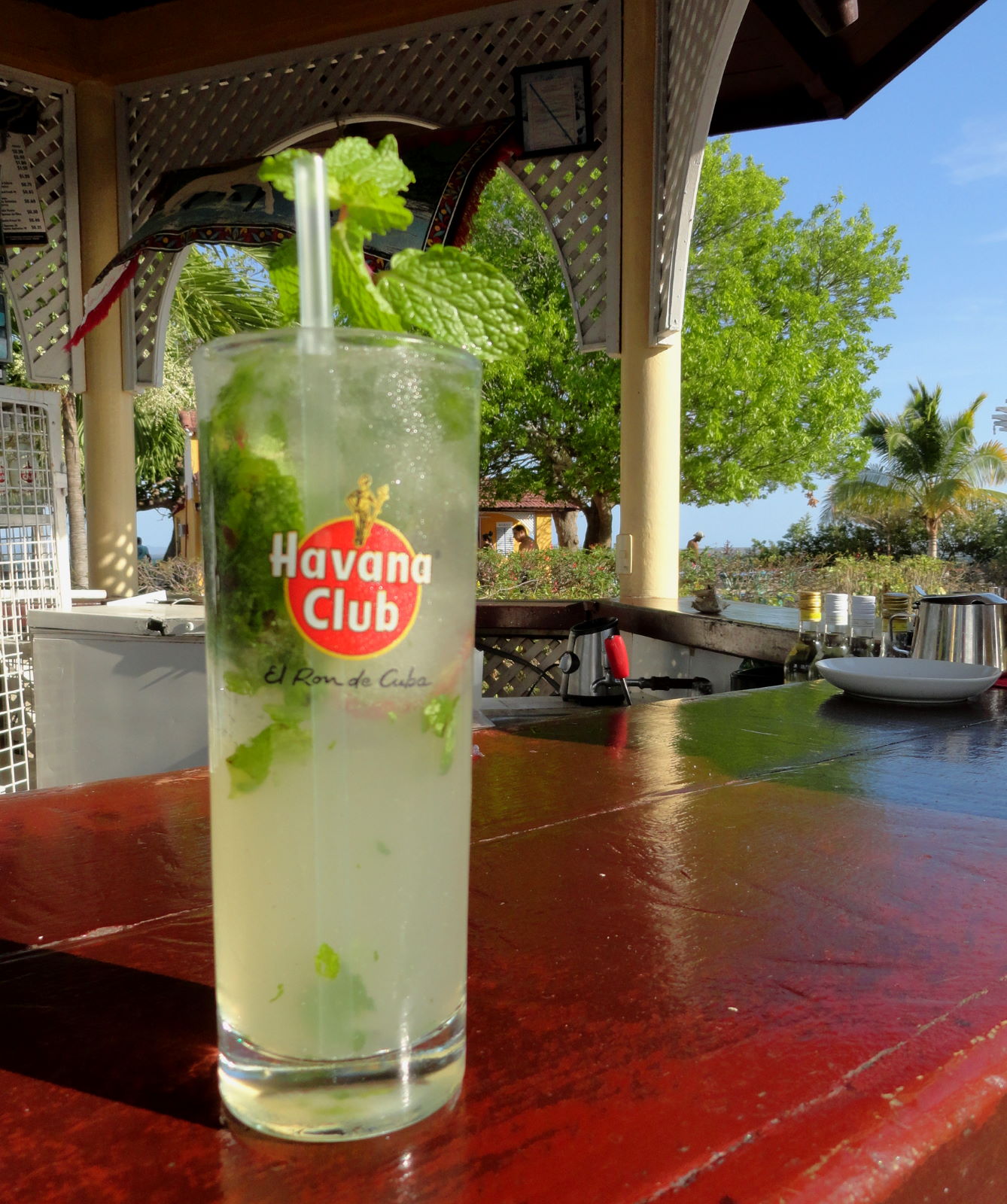 Hot, though. My body was telling me to get a cold drink, so of course I took heed. Something with ice, and water, and vitamins, such as C. And sugar, for energy. Hmm, what else…?

The idea of sipping a mojito at a touristy waterside Cuban bar is about as hoary a travel cliche as you can get. So it was clearly high time I did so, despite their being $3. (The name is a diminutive of mojar, ‘to wet’, so might translate as ‘little tipple’.)

I’d never had one before – I’m not a cocktails fan – but this sweet and lively concoction of rum, ice, tonic water, lime and mint certainly hit the target.

Unfortunately, a target is what I instantly became, as this extravagant display of wealth made me a magnet for jineteros (street hustlers). They offered me cigars and beautiful women. Then, when I irritably turned those down, drugs and beautiful men. In return I offered them some Spanish phrases I’d been given by one of my casa hosts which you wouldn’t find in a standard dictionary. 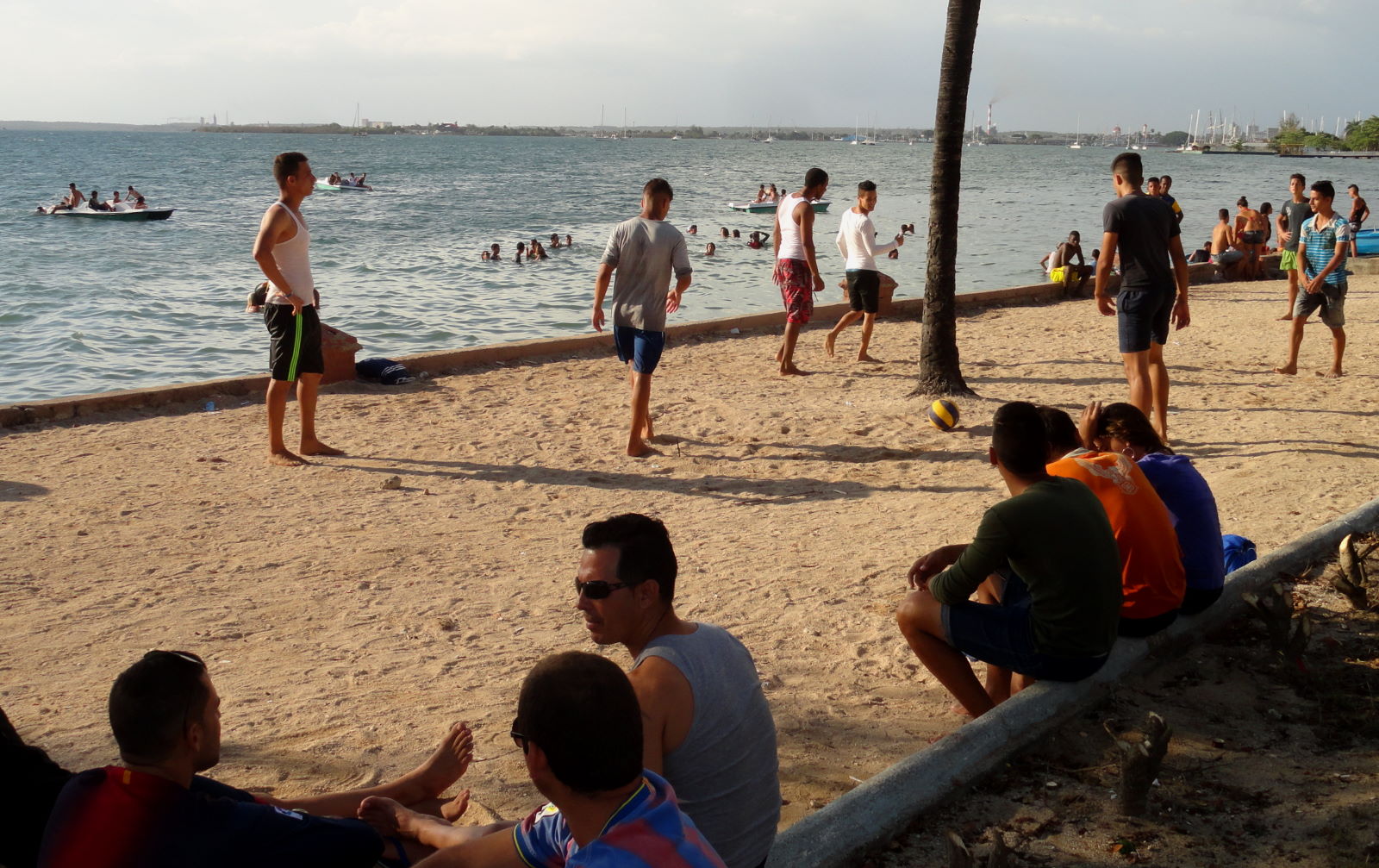 Still, I soaked up the otherwise friendly beach atmosphere (pic)… 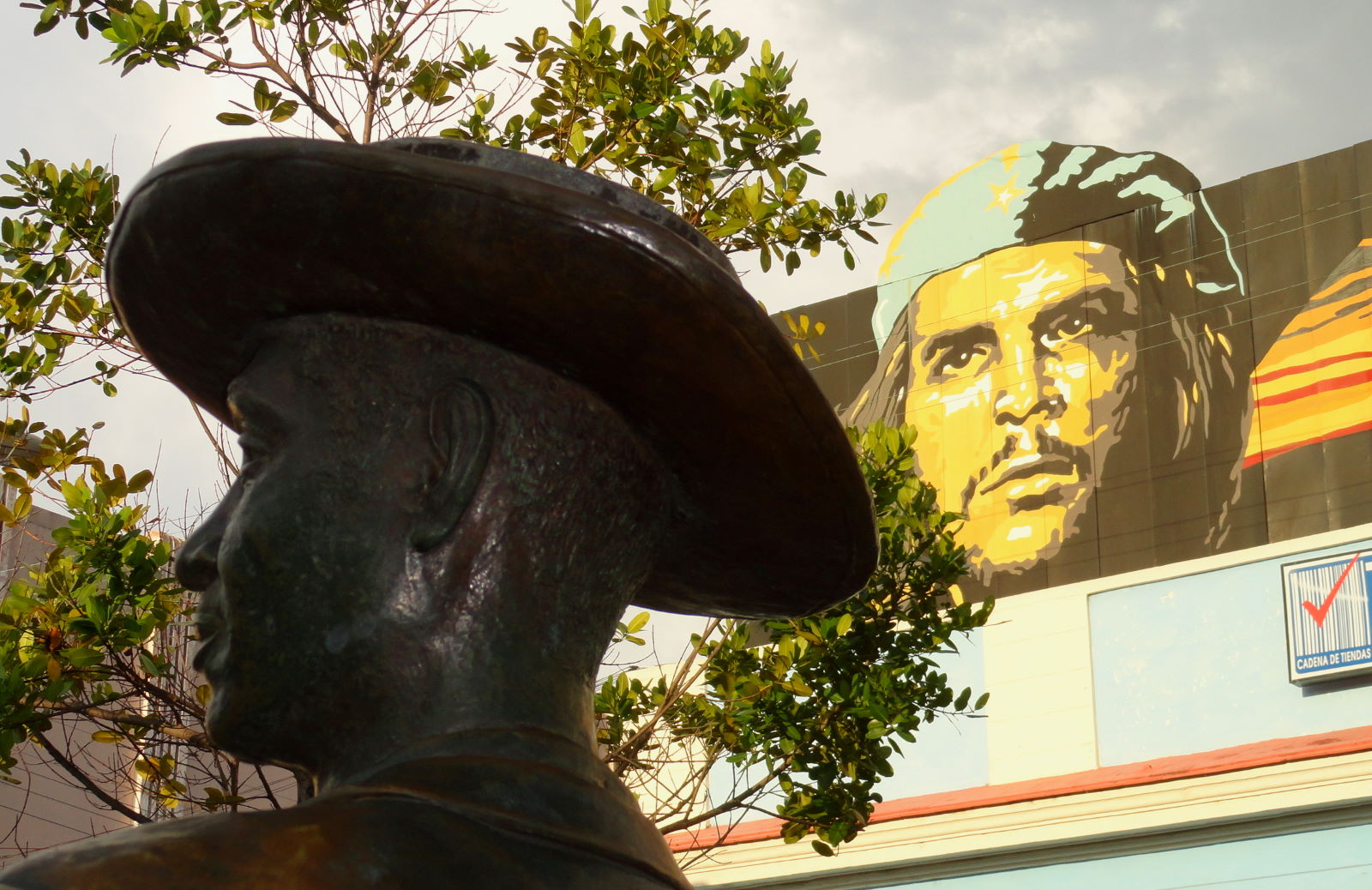 Back in the central square I had a few more smiley beers with a loquacious, engaging, Irish architect on holiday. I snagged ten-peso pizza on way back from local place, the best I’ve had in Cuba so far, munched it on the way back to the casa, and felt happy.