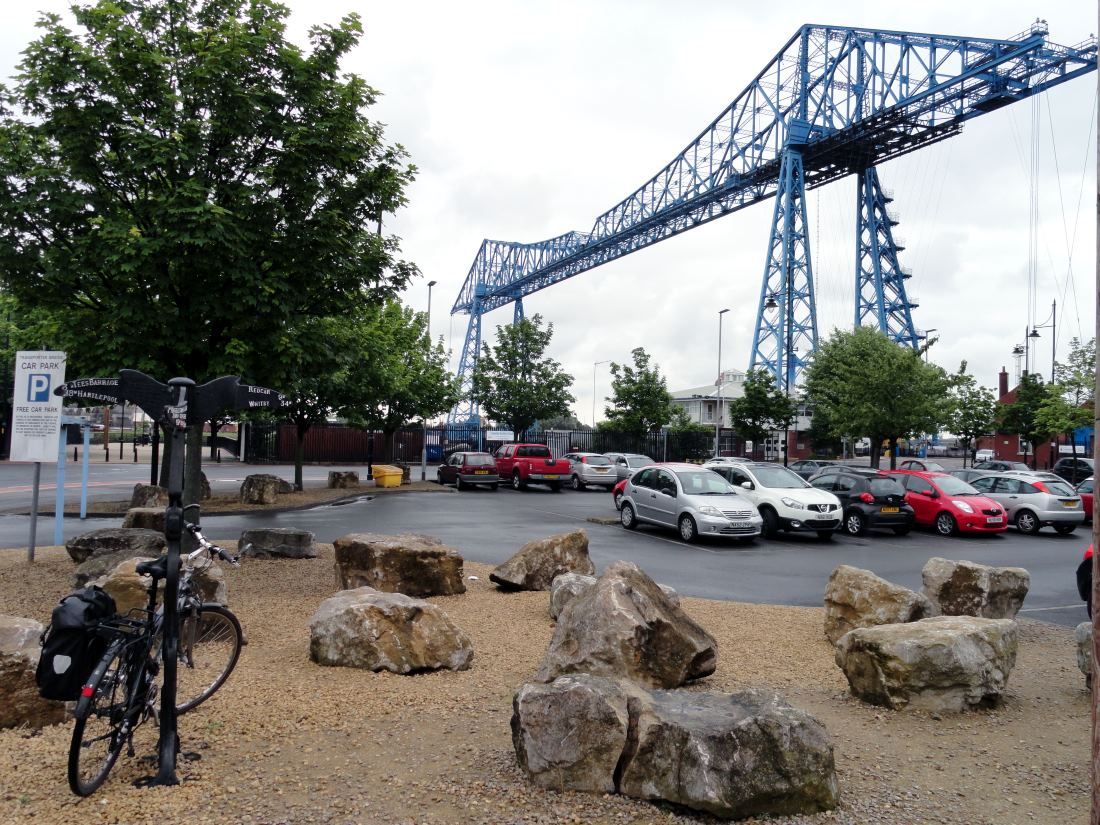 Middlesbrough, Yorkshire’s northernmost industrial town, is home to an iconic Transporter Bridge (pic) – one of only eight or so in the world still operating. It’s quite a metaphor for the area, and possibly for me: heavy, old-tech, struggling to grind on into the 21st century.

Transporter Bridges were constructed around the turn of the 20th century: a brute-force engineering solution to cross rivers on marshy plains where contemporary techniques couldn’t put bridges or tunnels. They resemble horizontal goods lifts, flying tennis courts, or the mutant offspring of a footbridge, ferry and electricity pylon. 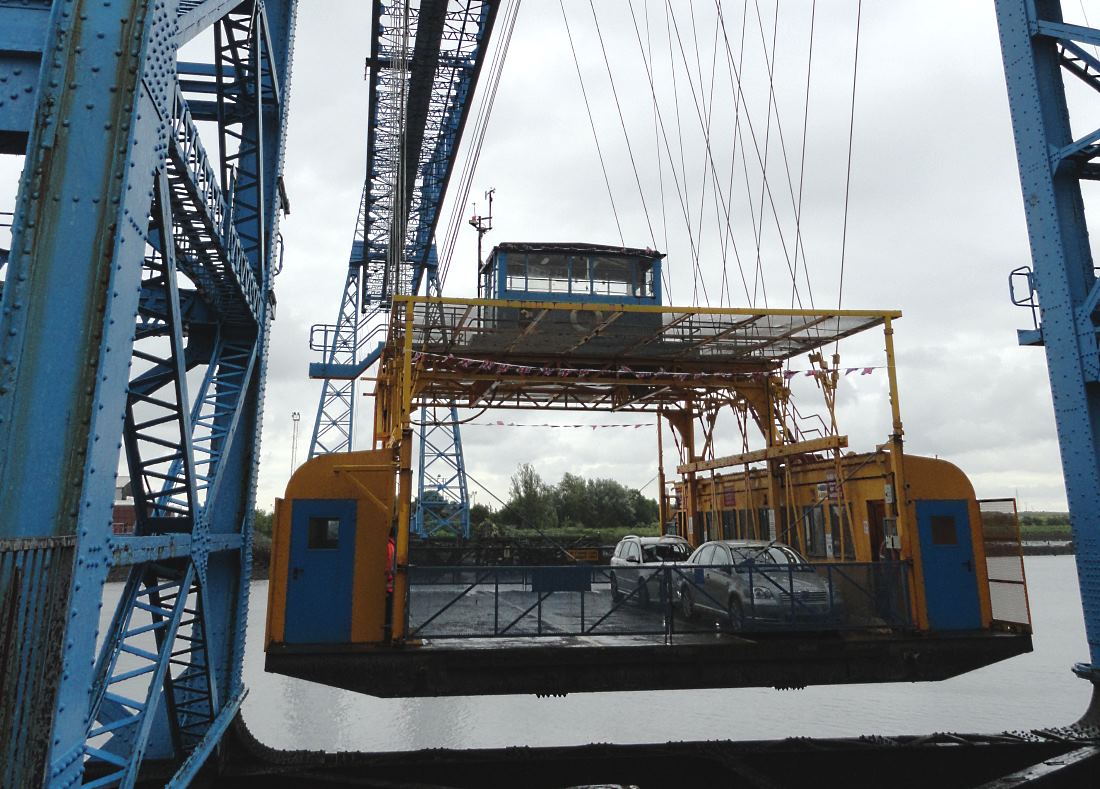 Middlesbrough’s shuttles across the Tees every few minutes, and can take 200 people and nine cars (pic). And cycles: I don’t know how many, because there was plenty of room when I went across. This rare experience (Newport’s Transporter Bridge is the only other example in the UK) costs only 60p for a cyclist. Though that’s quite a lot in the local context: a beer and burger at Wetherspoon’s is £3.99, a pint of real ale £1.75, and a cafe breakfast £1.79.

The economy is not booming, and the chemical factories that dominate the views have long passed their peak. Someone presumably still has the cash to buy a £43 Middlesbrough football shirt from the ground shop, a short bike ride along the river. But mostly it’s a poor town, with derelict buildings and abandoned factories aplenty. The river’s north bank is a forlorn wasteland; they could twin it with Detroit. 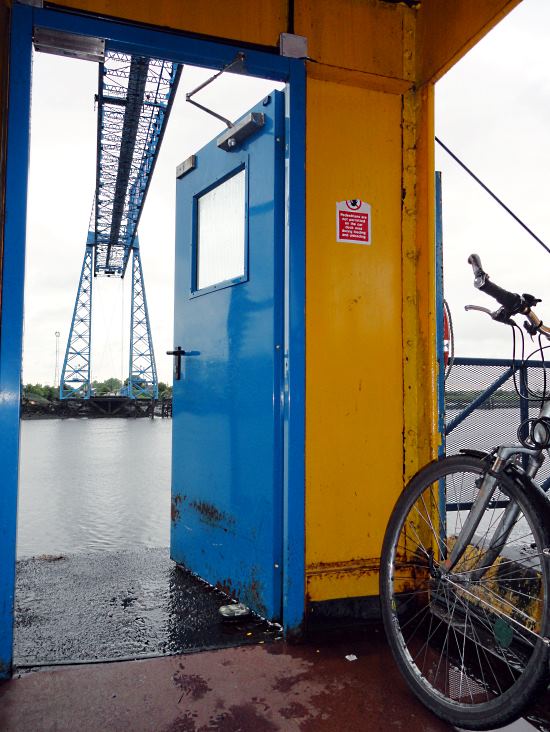 It’s not all misery. In the nearby town centre, the shiny MIMA Art Gallery is in a regeneration area with other facilities well-frequented by locals, such as the Magistrates Court. I am, it would seem, the only person who has ever gone to MIMA by bike: when I asked about bike parking they clearly didn’t understand. Perhaps they thought I was enquiring about an installation. Well, an installation consisting of six Sheffield racks would be a lot more interesting than most of the tosh in the gallery. This appears to be the nearest bike parking (pic): back at the Transporter Bridge.
Middlesbrough is one end of the NCN65, once called the ‘White Rose Route’, which runs here from Hornsea via Hull and York. The final stretch, across parks and back streets into the town, is a sparkling example of a leisure cycle route, thanks to the all broken glass. It’s a great way to meet locals, such as those who run bike repair shops.

The town is, in some ways, a grim example of the sort of post-industrial decline to be found in many once prosperous parts of Yorkshire. But there’s still plenty of positives. Middlesbrough Mela, a big weekend party celebrating the area’s Asian- and other multi-cultural makeup, is great fun. We’ve been a couple of times, and the street food was particularly memorable, in a good way.

But Middlesbrough’s residents know all about fusion cooking. The town’s celebrated contribution to international cuisine is the Italian-American-Yorkshire parmo, or chicken parmesan. A hearty serving with chips benefits you with 2600 calories – more than your daily requirement in one easy helping! It certainly is a time-saver. (I resisted the temptation. Like I said, a burger and beer at Wetherspoon is under four quid…)

And there are at least some green shoots in the North East’s new economy. Wikipedia reckons that the city is a hub for digital animation. Which, coincidentally, is exactly what I did when getting cut up by a fag-smoking taxi driver on my way back to the train station. In fact, it involved two animated digits.